Estavillo is a strategic town located on top of a hill that looks towards the river Zadorra. It is one of the oldest documented places in Álava, as we found it on a donation to the monastery of San Vicente de Acosta in 871 under the name of Stavellu. Its role as a crossroads, including the Jacobean route and the court road to France, explains the wealth that the town obtained in the medieval centuries, when it even rescued the neighbouring town of Armiñón from the abandonment by purchasing their lands. Its importance decreased in 1765, when the Postas road was redesigned and its route was deviated from Estavillo to Armiñón. As proof of this prosperity during the Middle and the Modern Ages stands the magnificent parish church dedicated to Saint Martin of Tours.

The early Romanism in the Basque Country

Romanism is an artistic movement that started in the mid-16th century and that was strongly established throughout the Basque Country. It comes from the influence taken by local artists from the great masters of the Italian Renaissance, especially Michelangelo, whose works were made known through books and engravings. Such is the fidelity of these makers to the model that it is sometimes easy to recognize in their figures some gestures, expressions or compositions of sculptures and paintings by Michelangelo, as well as his powerful anatomies, which are transmitted to all the characters. The altarpiece of the church of Estavillo is considered to be the first Romanist work of the entire Basque Country. Executed in the year 1567 by Pedro López de Gámiz, a sculptor whose workshop was in Miranda de Ebro, it soon became an example and its style was learned and imitated by sculptors and altarpiece artists from all over the Basque Country. 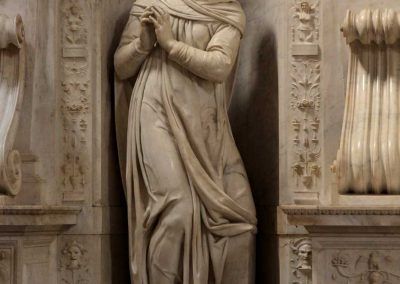 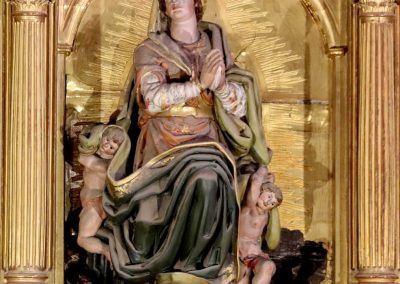 Old photographs  The old photographs of Estavillo reveal a building that has not gone through significant modifications in recent decades nor has been subjected to important restorations. However, even though we can not guess it from the photographs, it did have to regret a loss at the end of the 19th century. We refer to the chapel of Saint Joseph, built in 1623. Towards 1867 the chaplaincy was extinguished and it was demolished years later, in 1899. The scars of the chapel can be guessed on the south wall and some of its remains were reused to build the bowling alley annexed to the church. 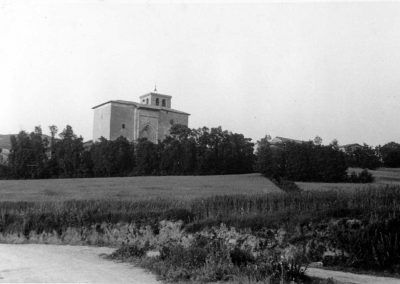 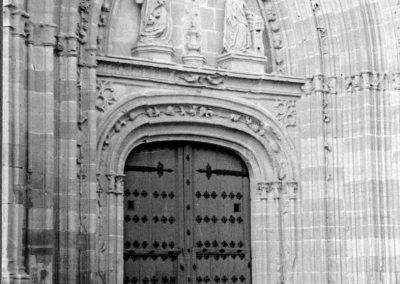 The church of Saint Martin of Tours

Outside We know from documents that the current church of Saint Martin of Tours was originally Romanesque. Nevertheless, there is no recognizable remnant of this style left, as the building was redesigned between the late 15th and early 16th centuries, in a Gothic style that begins to establish its first contacts with the Renaissance. The facade belongs precisely to this moment, which shows its past wealth despite the deterioration of the sculptures of the doorjambs and archivolts. 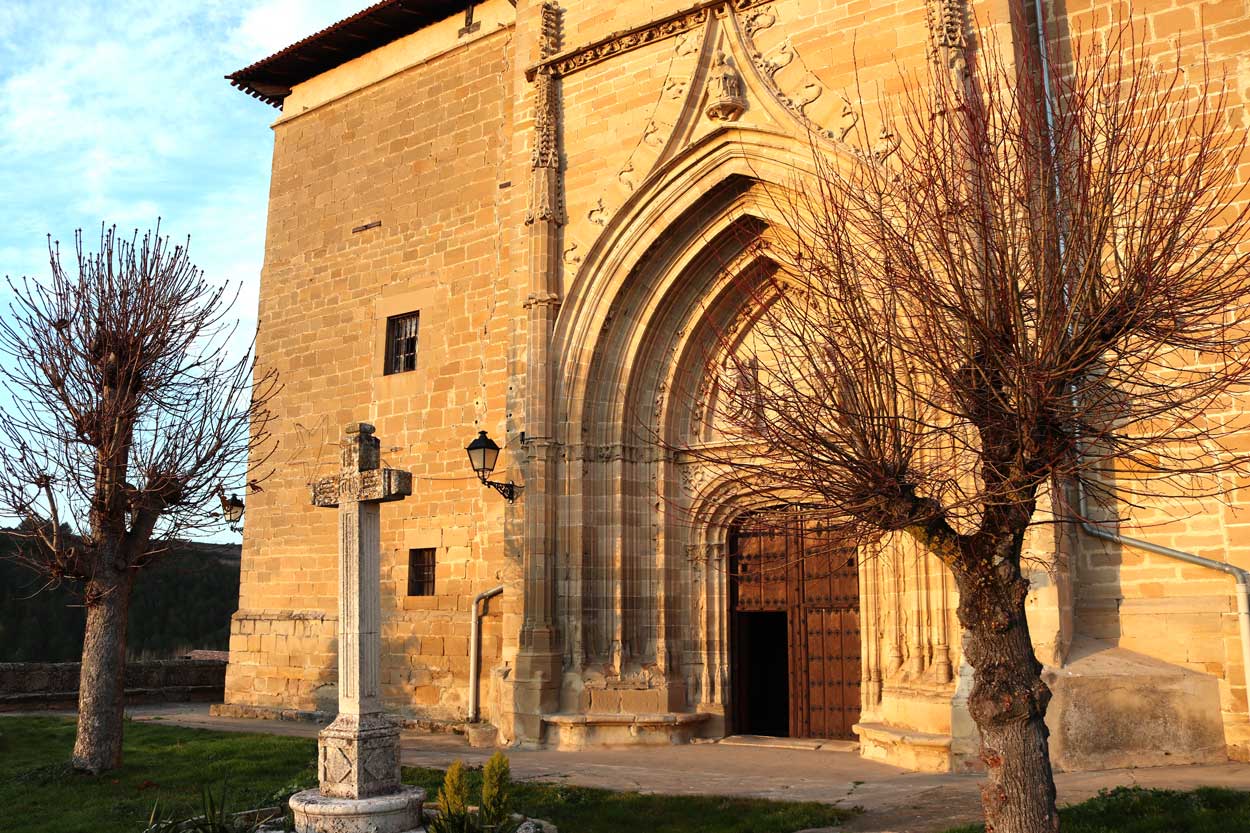 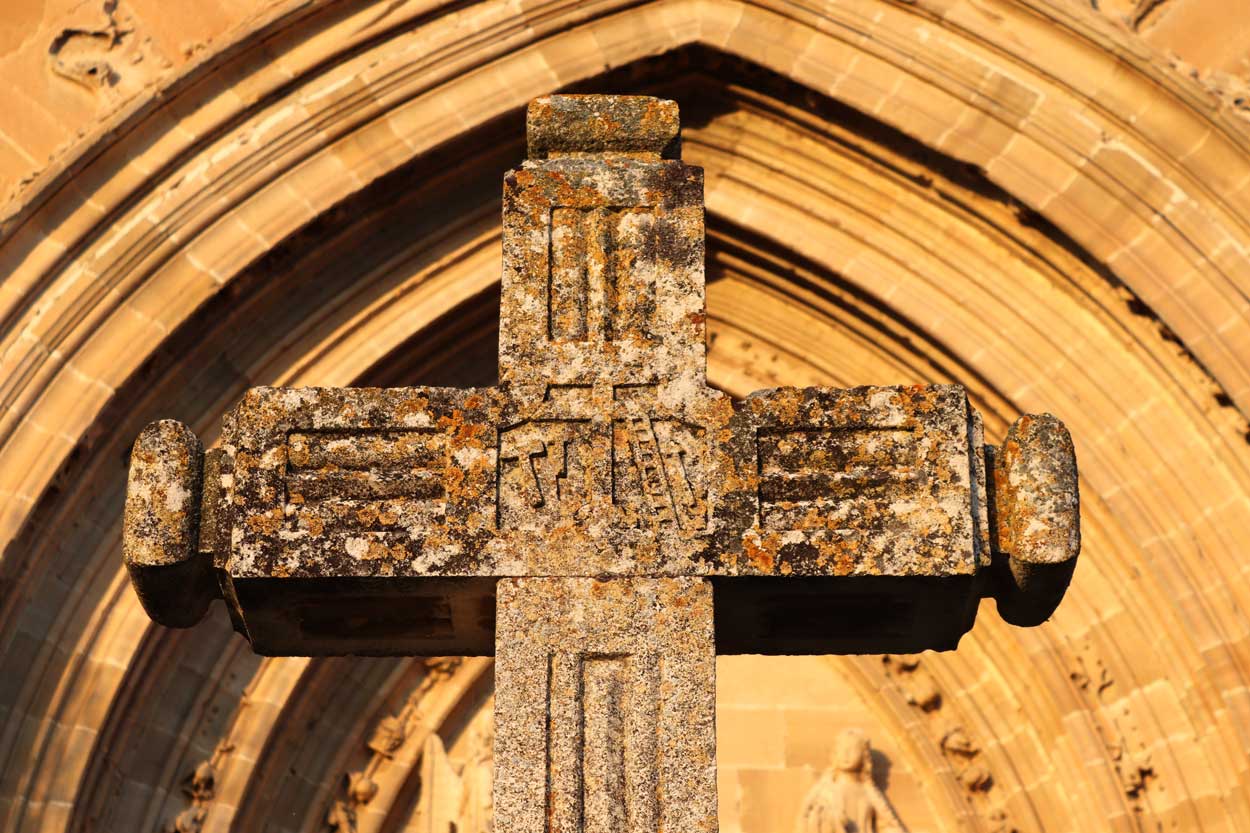 An Annunciation is the absolute protagonist in the tympanum. We see the Virgin Mary on a prie-dieu full of books while the angel informs her of her election as the mother of Christ. A vase of madonna lilies divides the characters and, over it, we find God the Father making the dove of the Holy Spirit descend. The distance away from each other of the figures and the gaps generated between them make us think that the tympanum was conceived to be painted, offering a background to the reliefs. 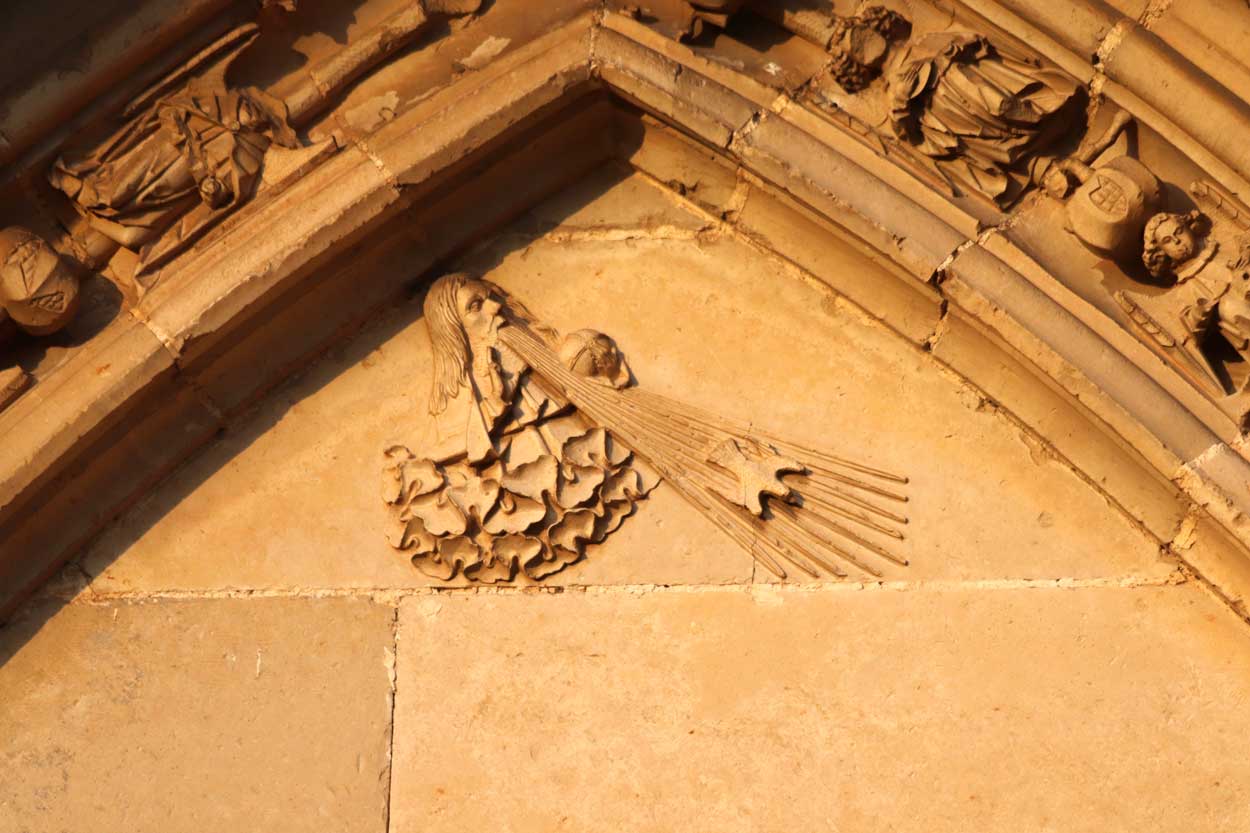 In the upper angle of the ogee arch we find Saint Martin of Tours, the main advocation of the temple, dressed as a bishop, and over him, a frieze full of angels that carry the tools of the Passion: nails, a crown of thorns, lances… 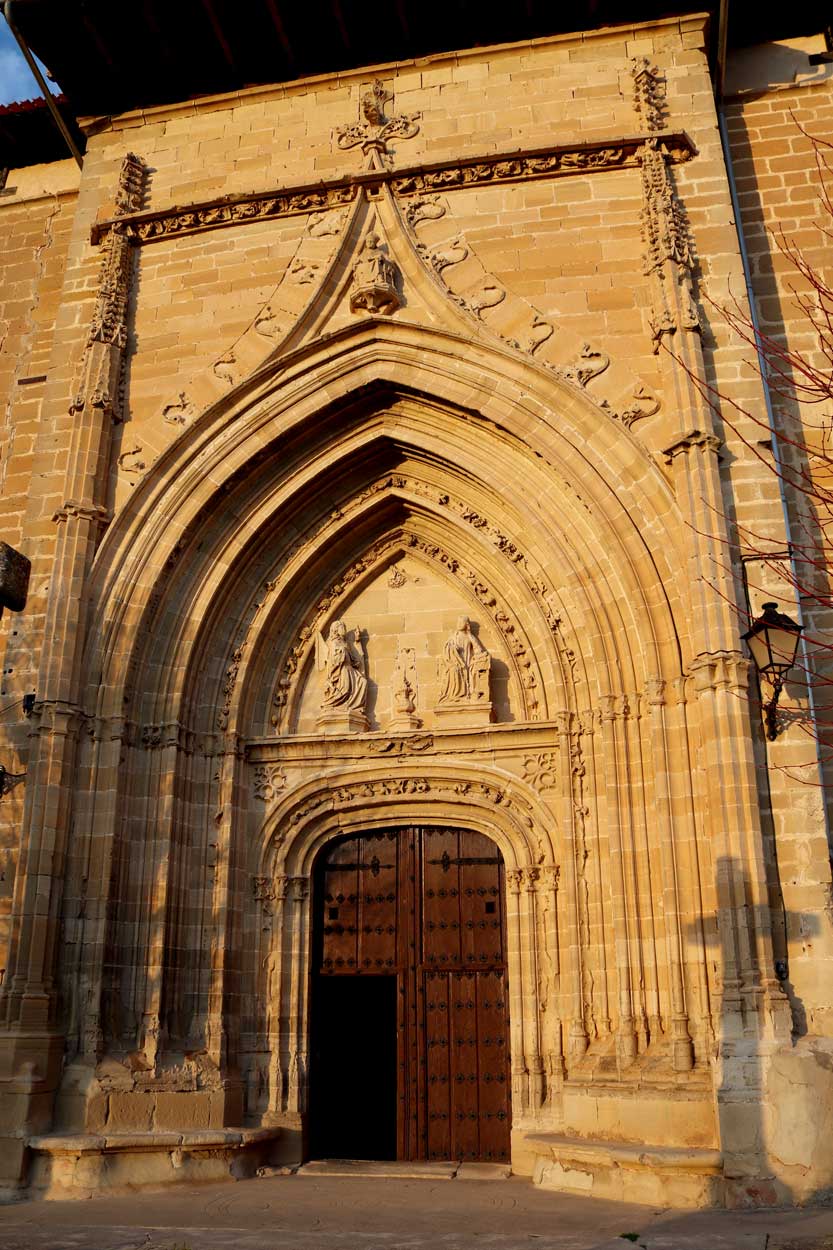 On the interior, the height and dimensions of the church are astonishing, crowned by vaults of intermediate ribs and star vaults. Towards the feet of the church, we see the choir, a work from the 17th century that replaced a Gothic-styled one, of which there are still some remains left, such as the magnificent staircase that it is still preserved in the north wall. Incidentally, the promoter of the choir, Juan Pérez, is located on its front, since his old grave, which originally was in horizontal position, was relocated to this area when the private chapel that hosted it was removed. 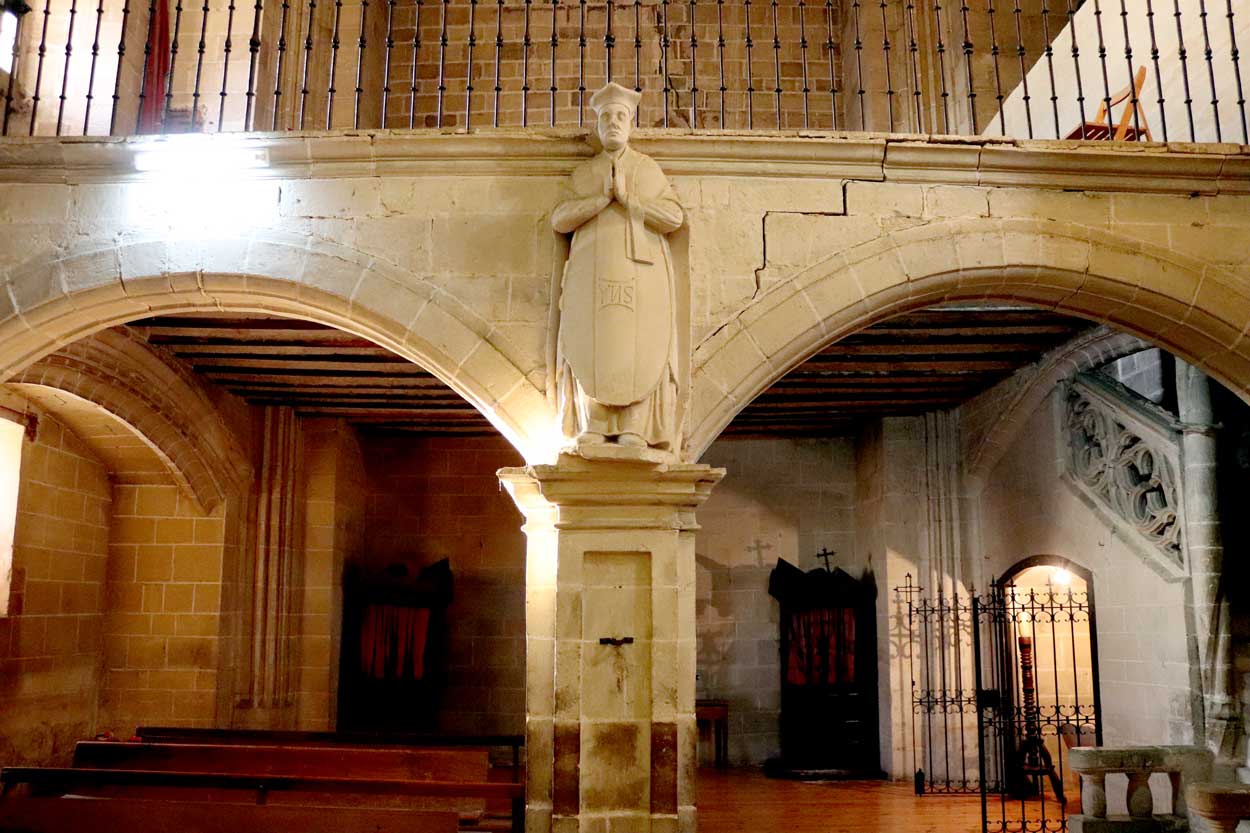 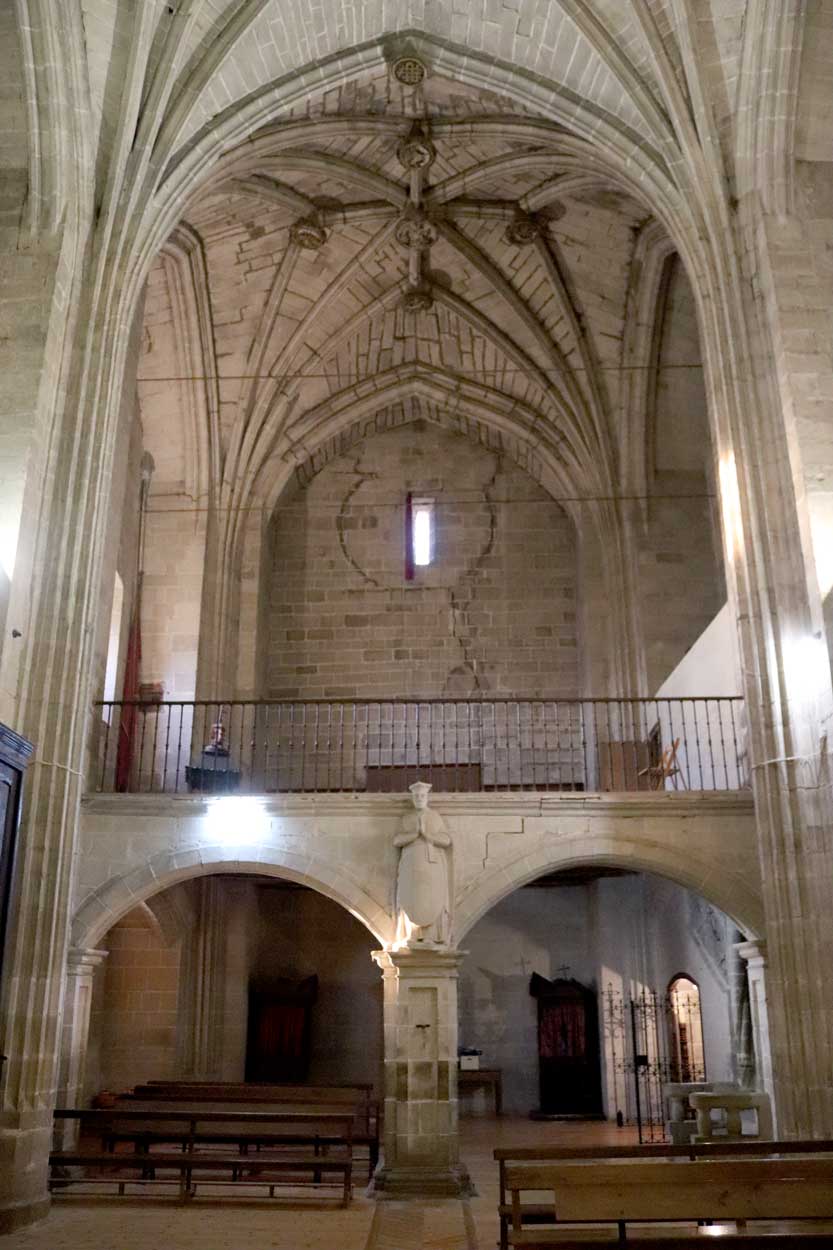 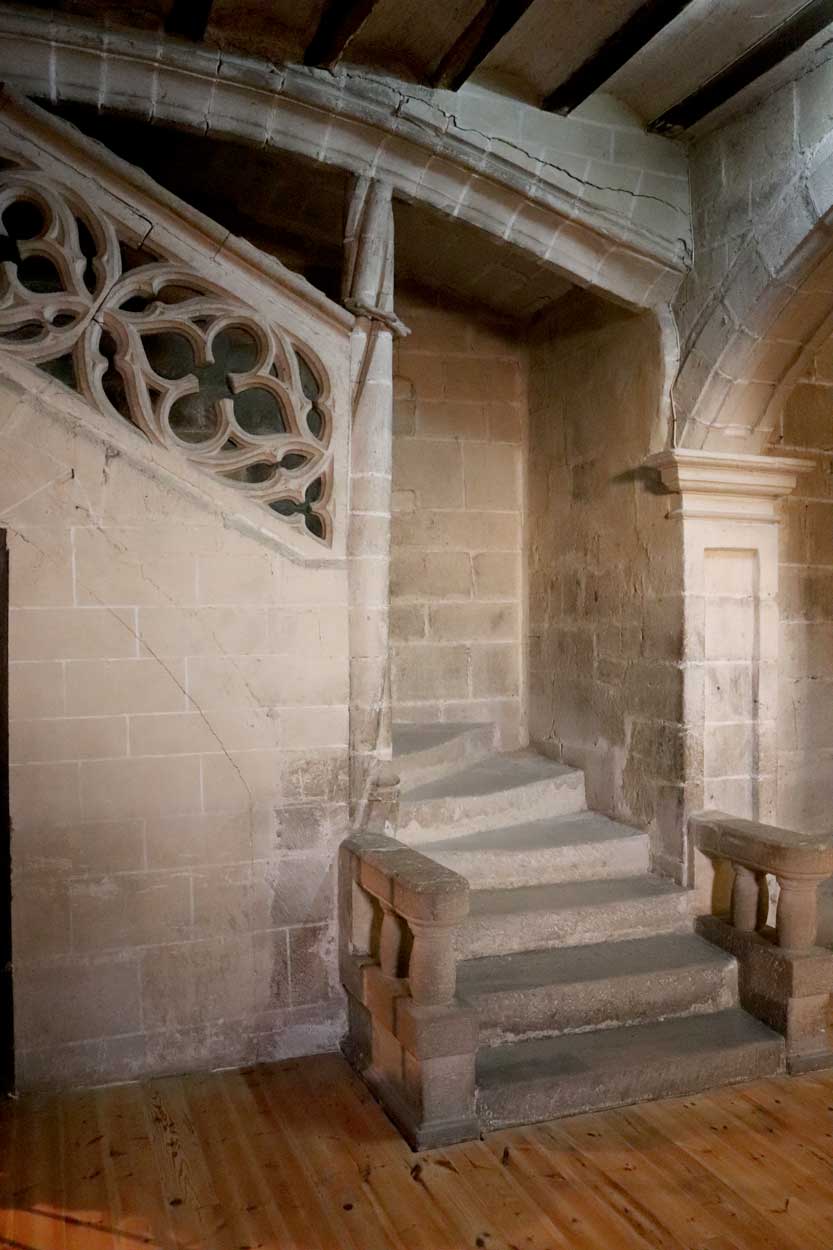 The magnificent altarpiece is framed by some baroque mural paintings that complement it and that show God the Father, the dove of the Holy Spirit among angels and two allegories: a blindfolded Faith with the holy chalice and the cross and Hope with an anchor. These paintings were probably executed at the same time as the polychromy of the altarpiece, gilded and brushed in the 18th century, two centuries after its execution. 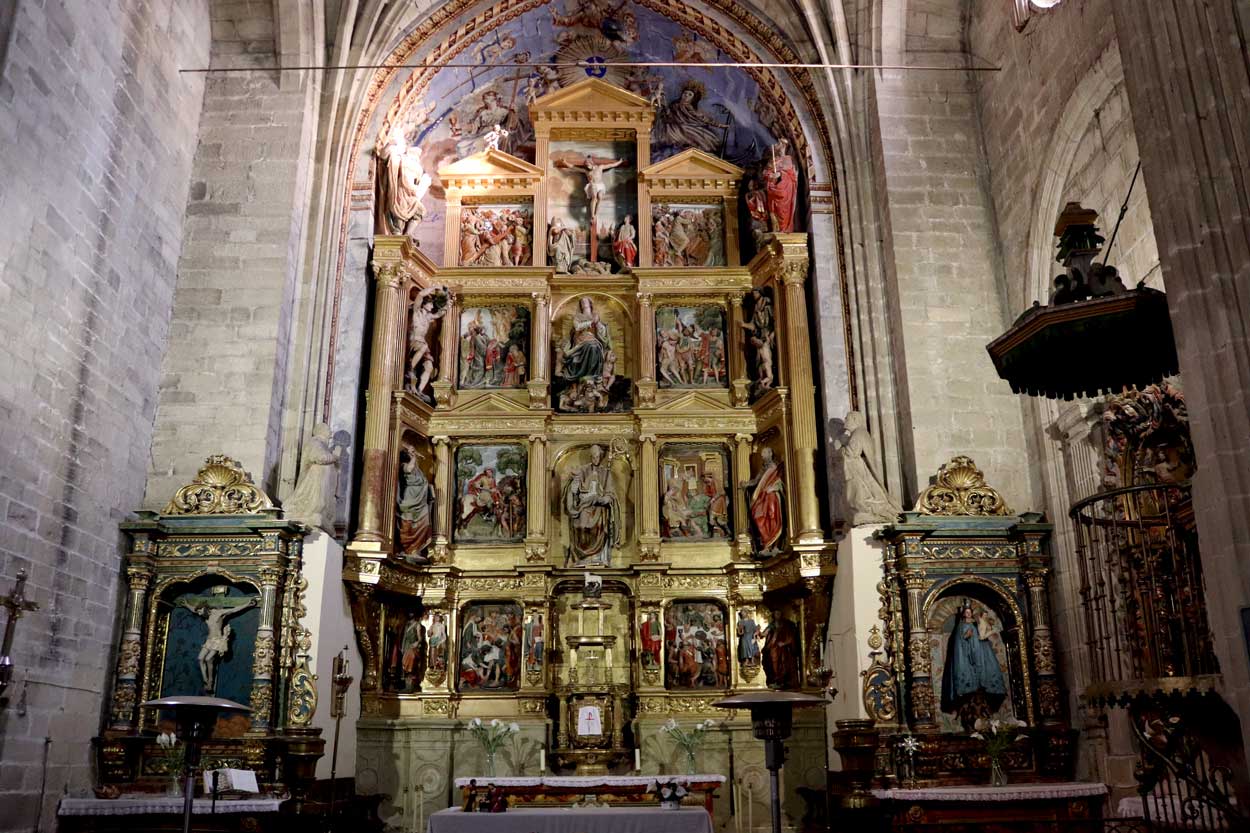 In the central panel of the altarpiece we find sculptures that we identify with Saint Martin the bishop and the Assumption, accompanied by several reliefs where we see scenes of the life of the French bishop saint, like the partition of the cloak, the saint’s dream in which Christ appears to him, Saint Martin helping his servant to take off his boots and the assault of the thieves in the Alps. The rest of the reliefs refer to the Calvary of Christ, while among the sculpted characters we highlight Saint Roch and Saint Sebastian, saints that were invoked against the plague who had hermitages in the town. 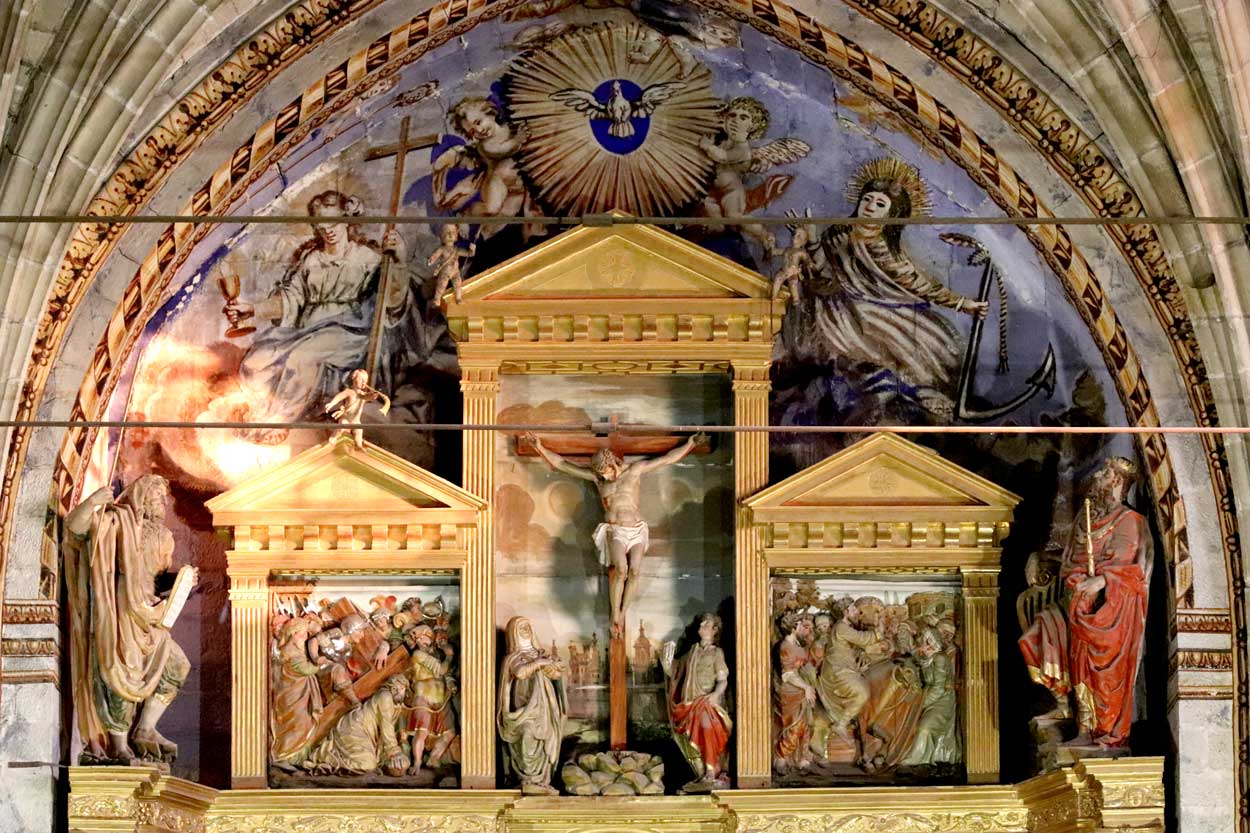 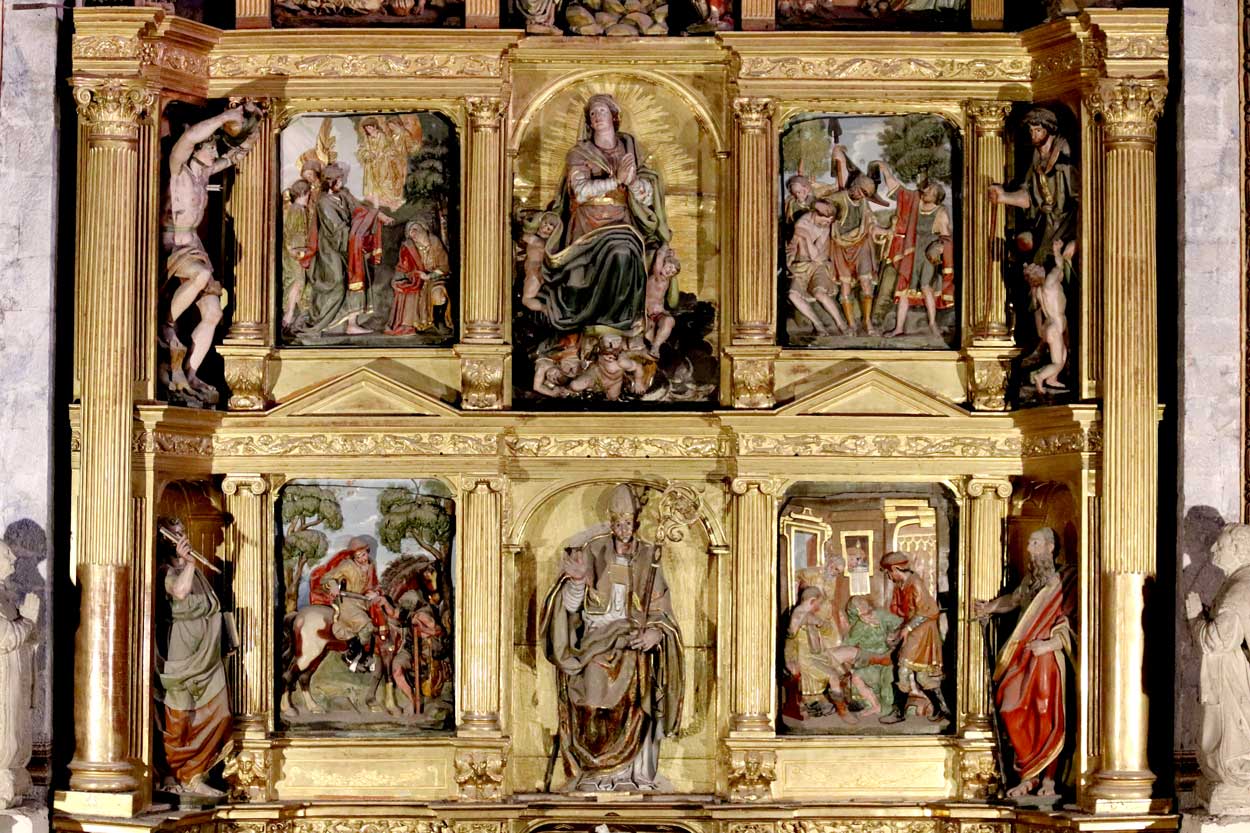 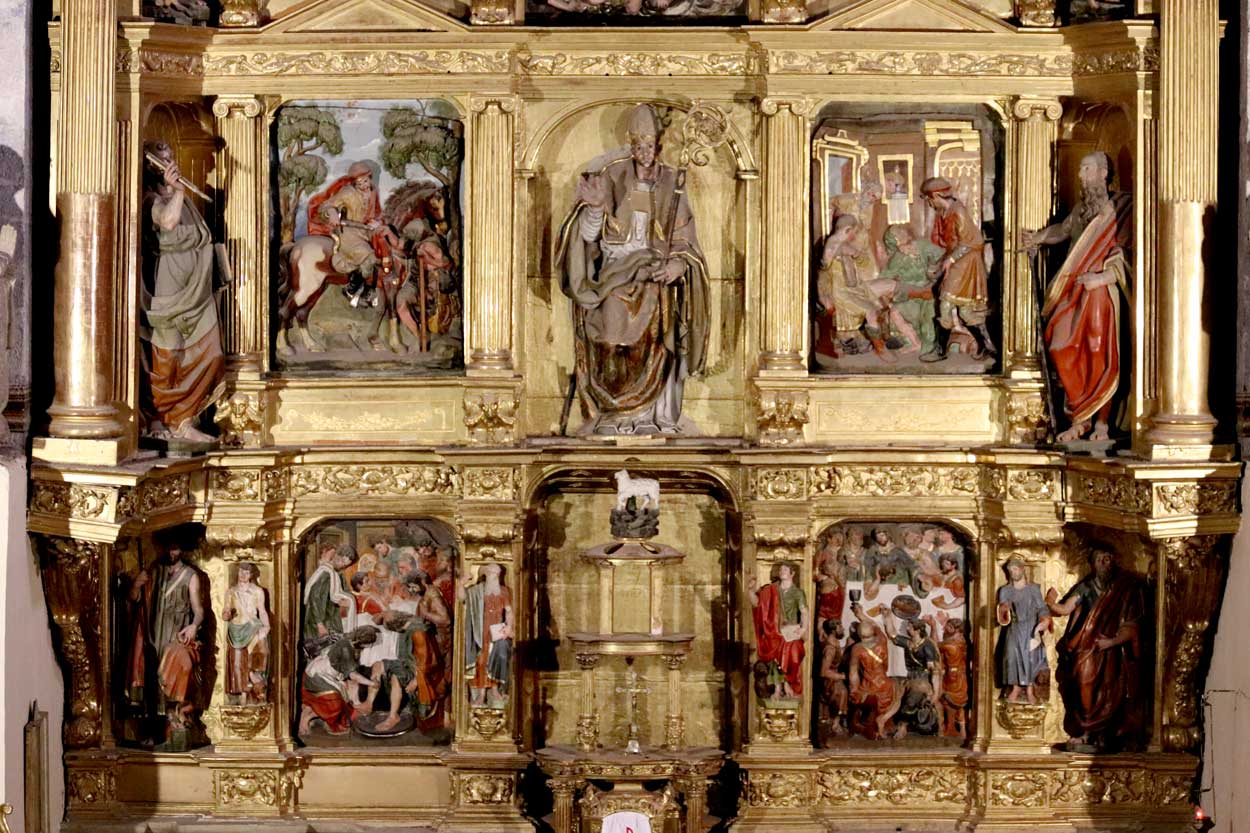 We also find another altarpiece of great quality on the chapel of the Immaculate Conception. Founded by a parish priest of Estavillo in the 16th century, it houses the work of Francisco de Ayala, an important sculptor with a workshop in Vitoria. The altarpiece was not polychromed and represents an Immaculate flanked by two reliefs with the weighing of souls of Saint Michael and Saint John the Baptist in the desert. On both sides of the calvary that crowns the altarpiece we find again Saint Roch and Saint Sebastian. 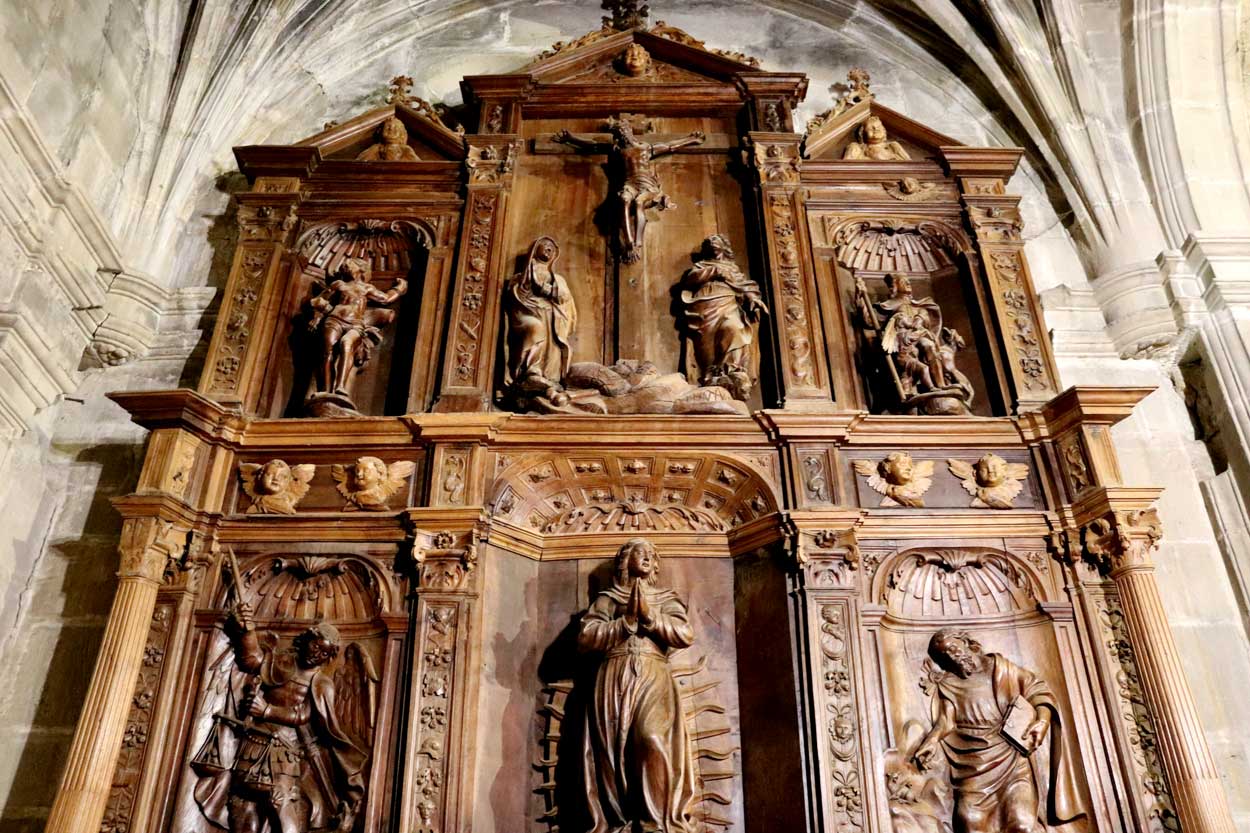 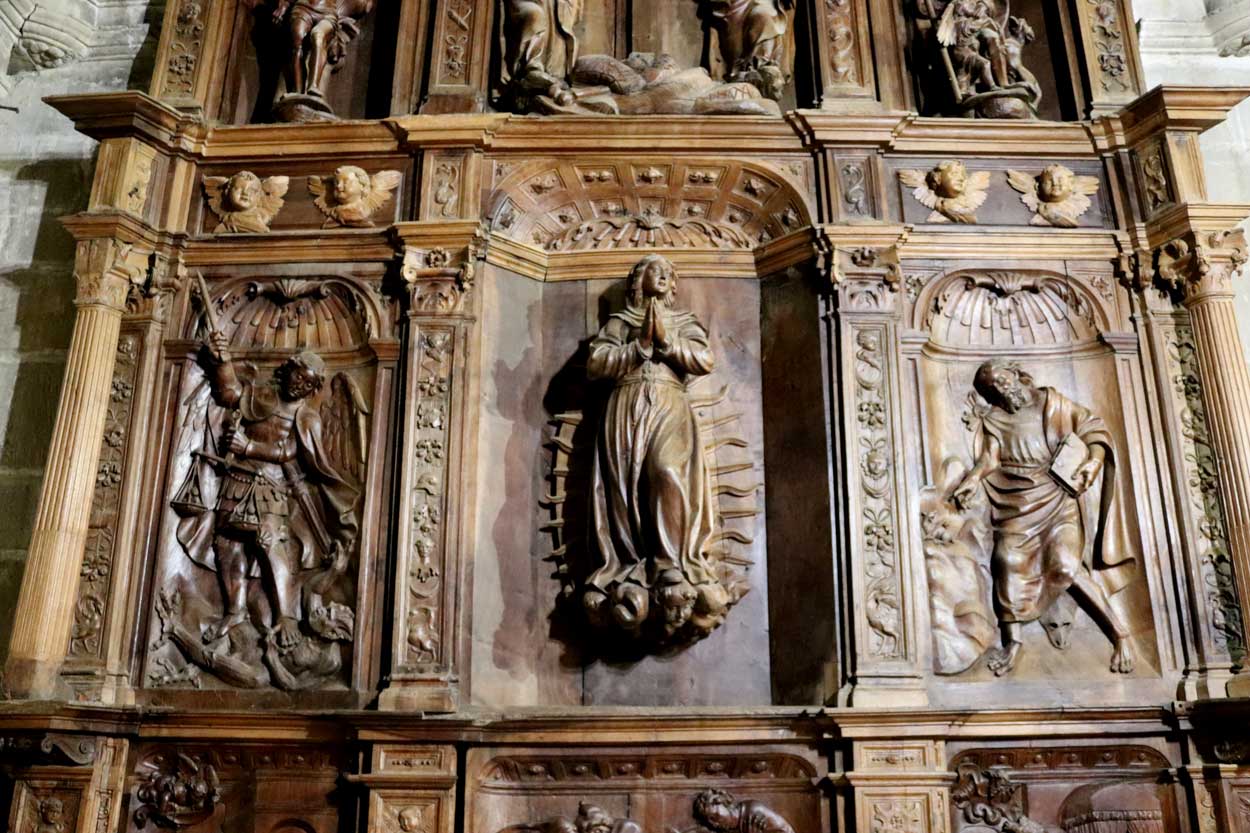 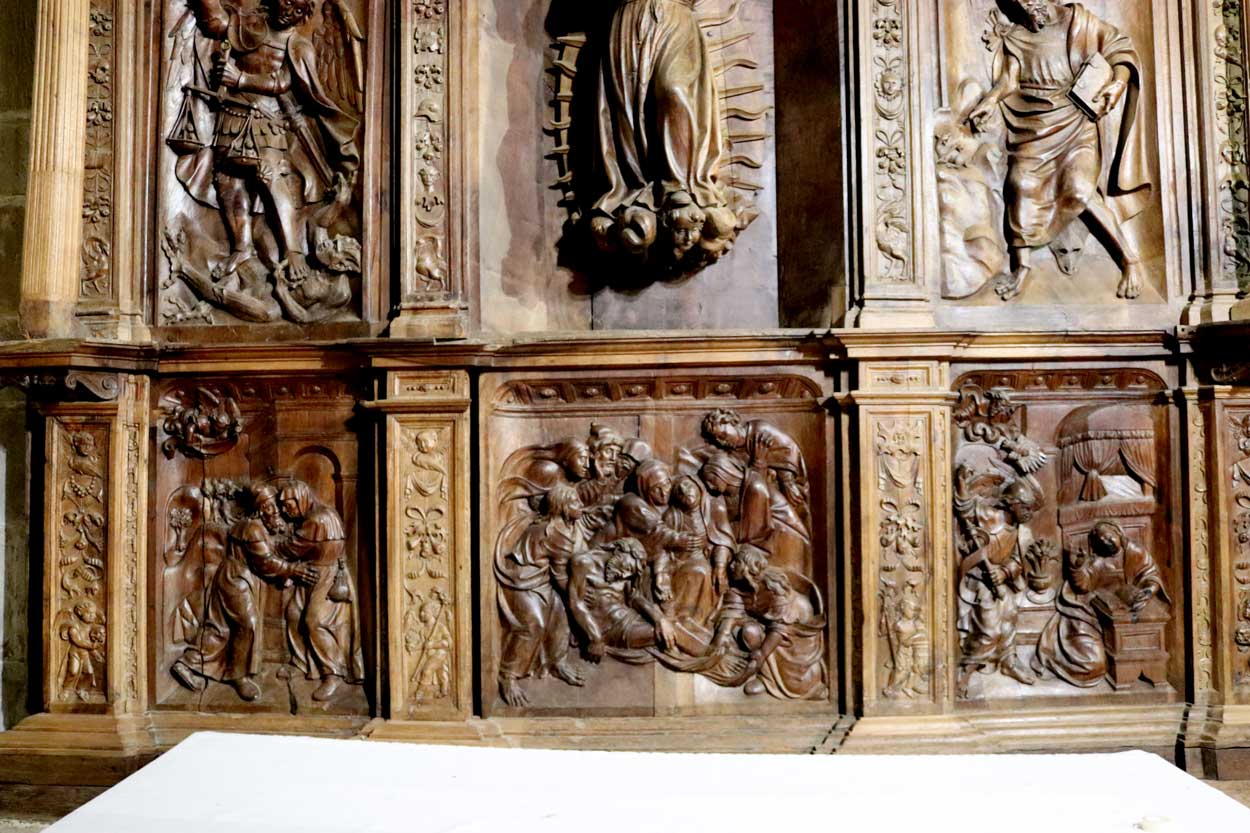 There was another chapel of the 17th century in the temple, today disappeared, whose entrance door is hidden towards the interior by an altarpiece of Saint Joseph. The funerary sculptures that today we see all around the church were originally there: the one of Juan Perez that dominates the choir, and the ones of Martín and Cristóbal Perez, which today can be seen on both sides of the main altarpiece, in praying position. This chaplaincy was extinguished in the mid-19th century, and its final demolition was carried out in 1899. 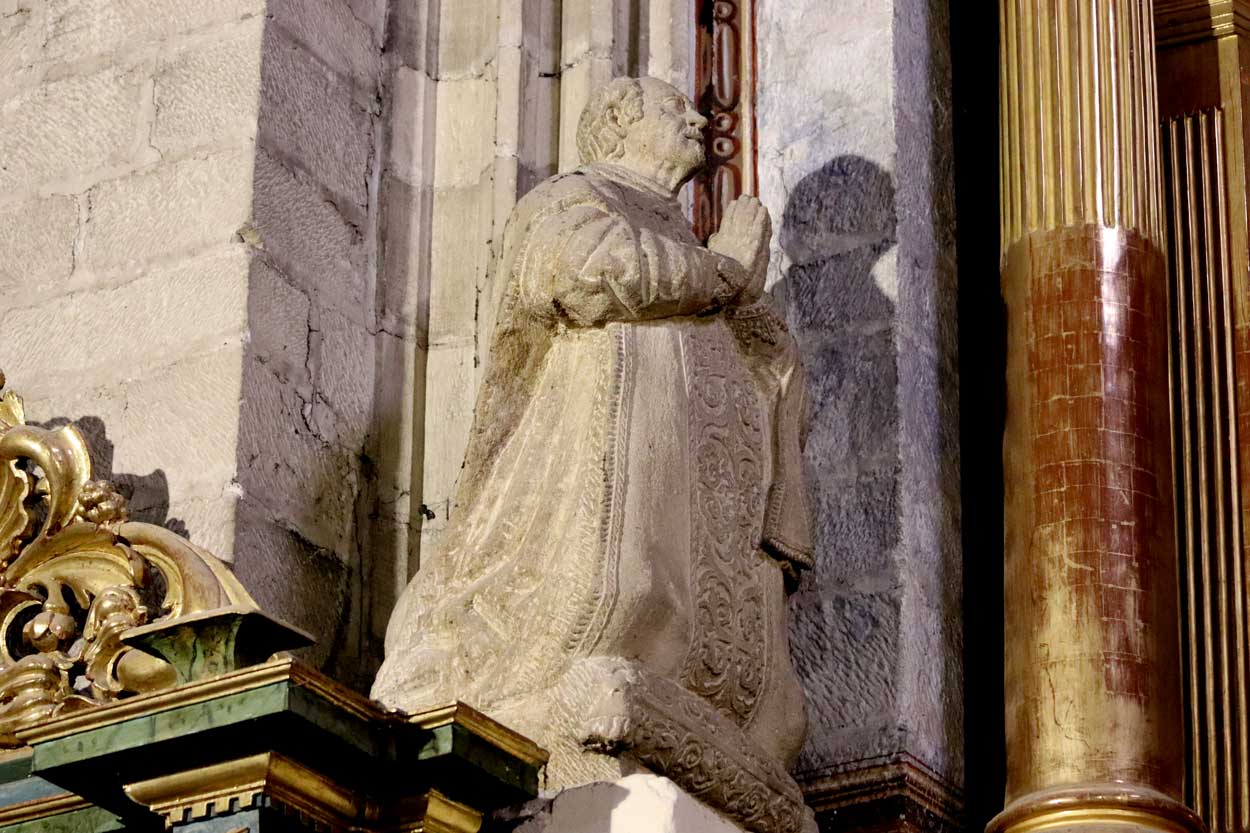 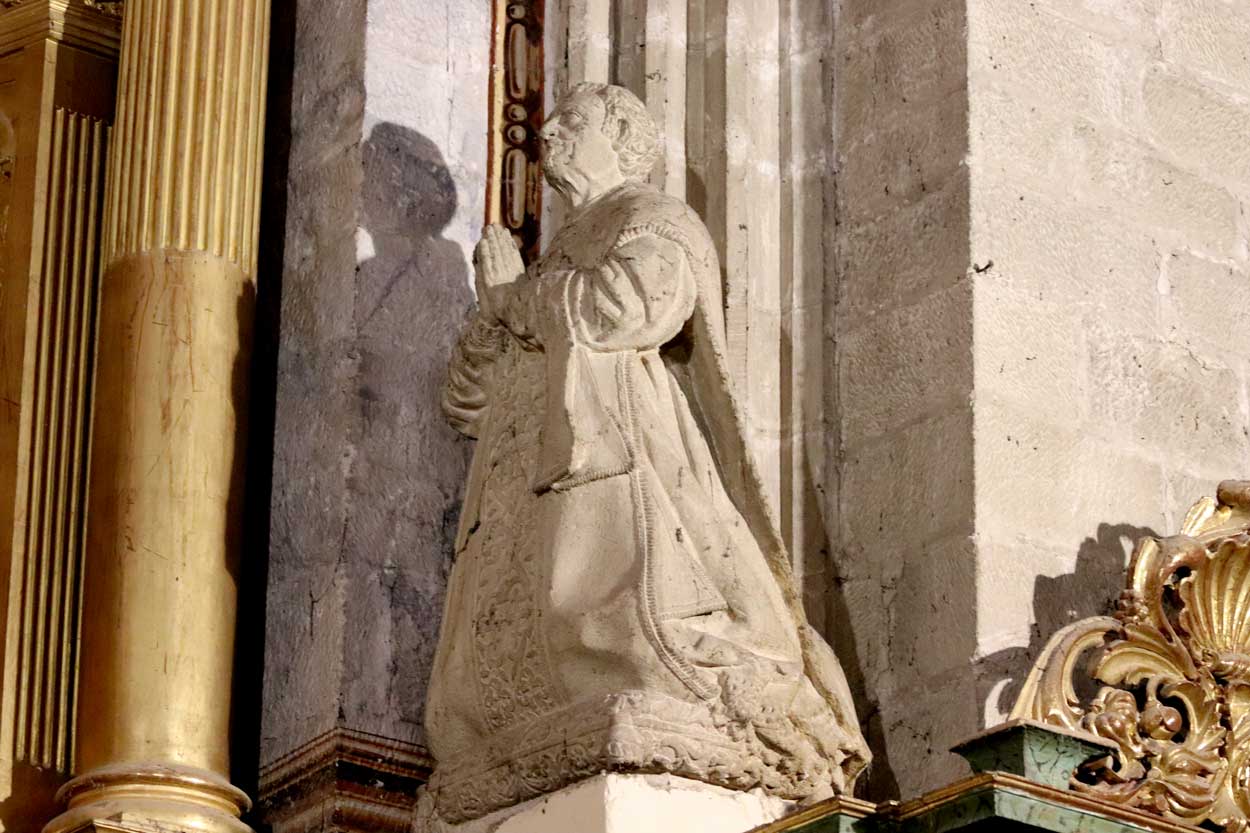