The history of Villanueva de la Oca, a town on the enclave of Treviño, is linked, at least since the 12th century, to the neighbouring village of La Puebla de Arganzón. After the concession of the fuero to the latter in 1191 by Sancho VI of Navarre, the Wise, Villanueva de la Oca is stated as one of its five small villages, since then sharing a common destiny. Thus, when La Puebla became part of the manor of the Velasco family Constables of Castile, this town was also granted to them. The impact of the great aristocratic families of the town also becomes noticeable on the church of the village, as some of their members were important promoters of artistic works. Its location right in the Way of Saint James on its route through Álava has also made it to be very visited by the pilgrims who finish their stage in La Puebla de Arganzón. 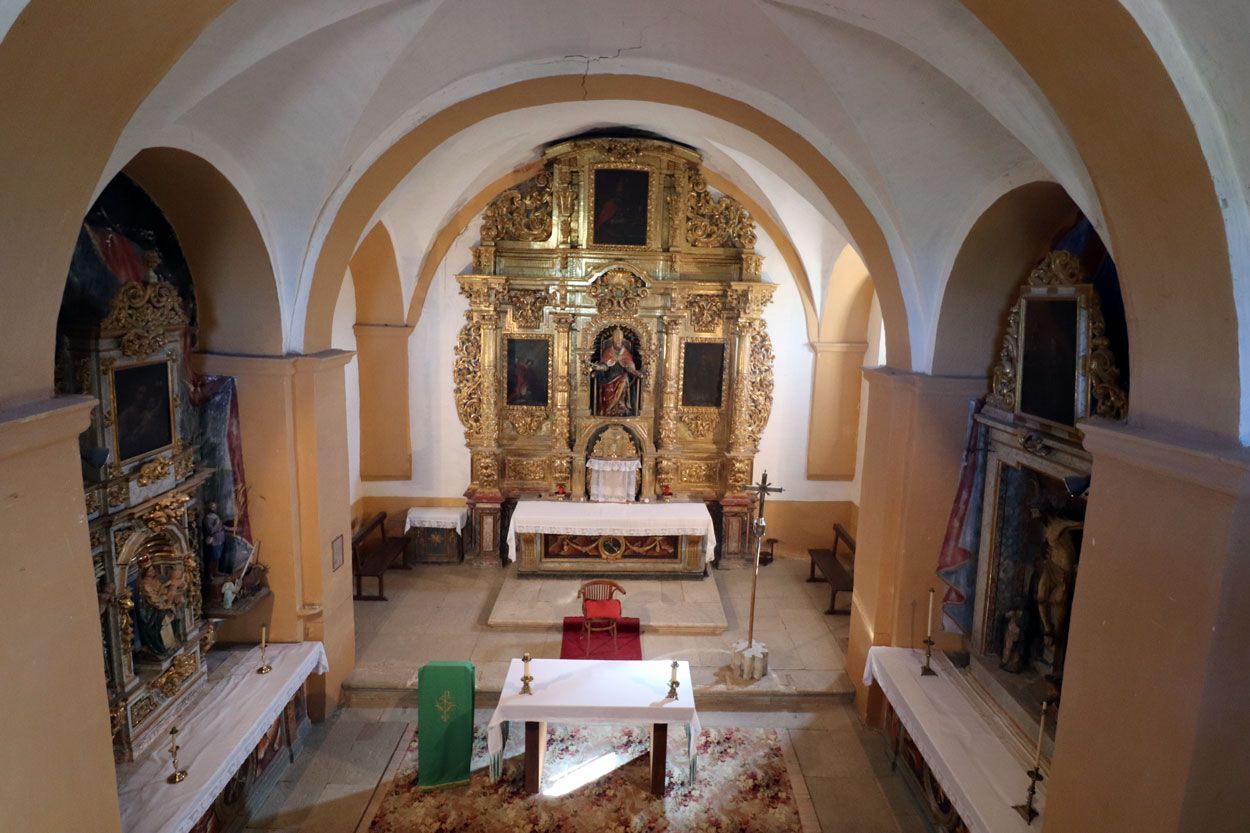 As the researchers Pedro Luis Echeverría Goñi and José Javier Vélez Chaurri demonstrated, the iconography we see on the three altarpieces of the church of Villanueva de la Oca forms a studied plan created by its promoter: Manuel Agustín de Ondona. This personality, born in La Puebla de Arganzón and descendant of the important lineage of the Gordejuelas, became parish priest of Villanueva de la Oca. In 1734, he ordered three altarpieces with a series of paintings that he gave to the church of this town, carefully choosing the discourse. The represented saints refer to his biography and personal devotions, especially focused on popular saints of the Counter-Reformation with whom he could feel connected. As this work came directly from the ecclesiastical estate, we can see that there is an elaborate and propagandist message that tries to show the main principles of the Counter-Reformation. 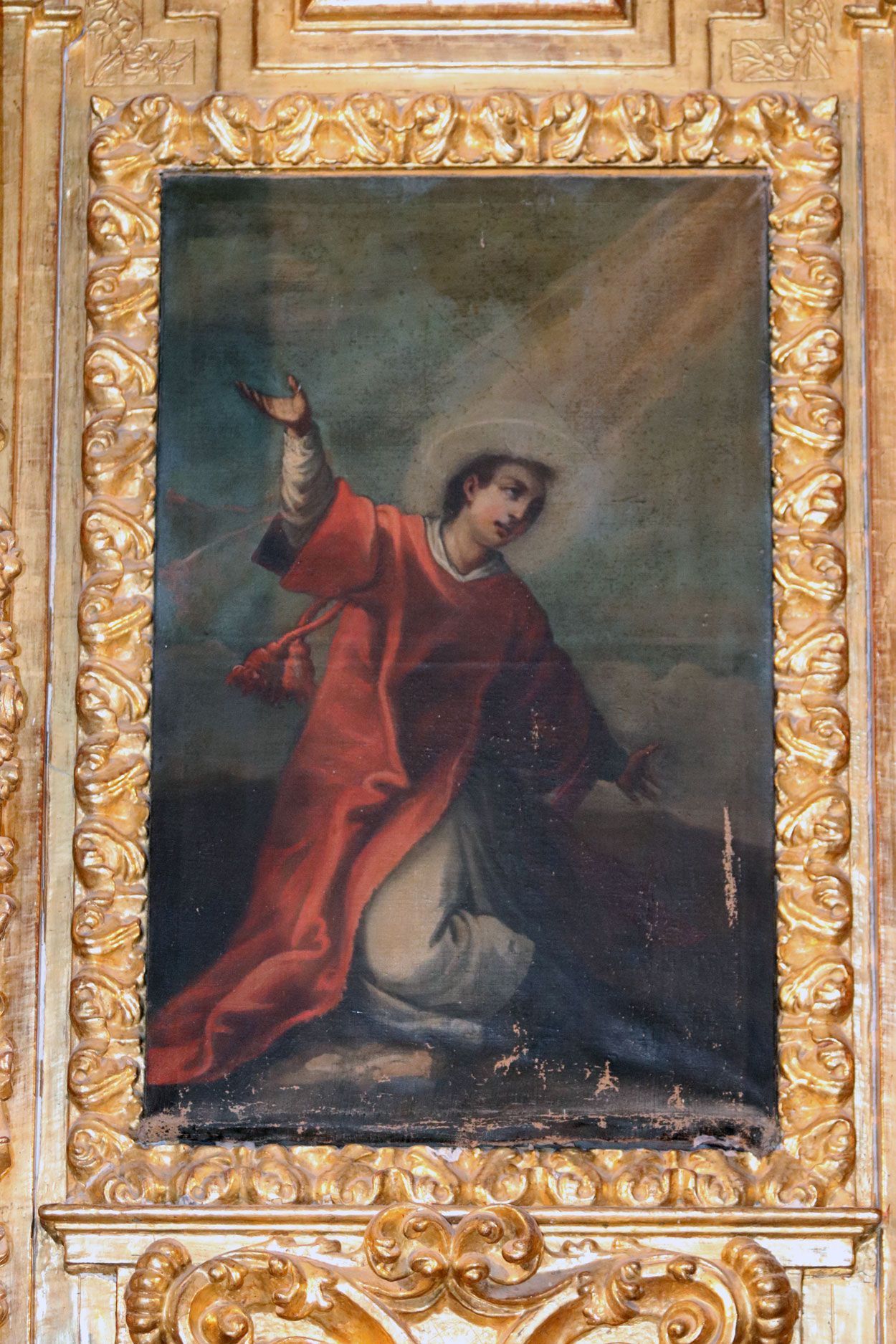 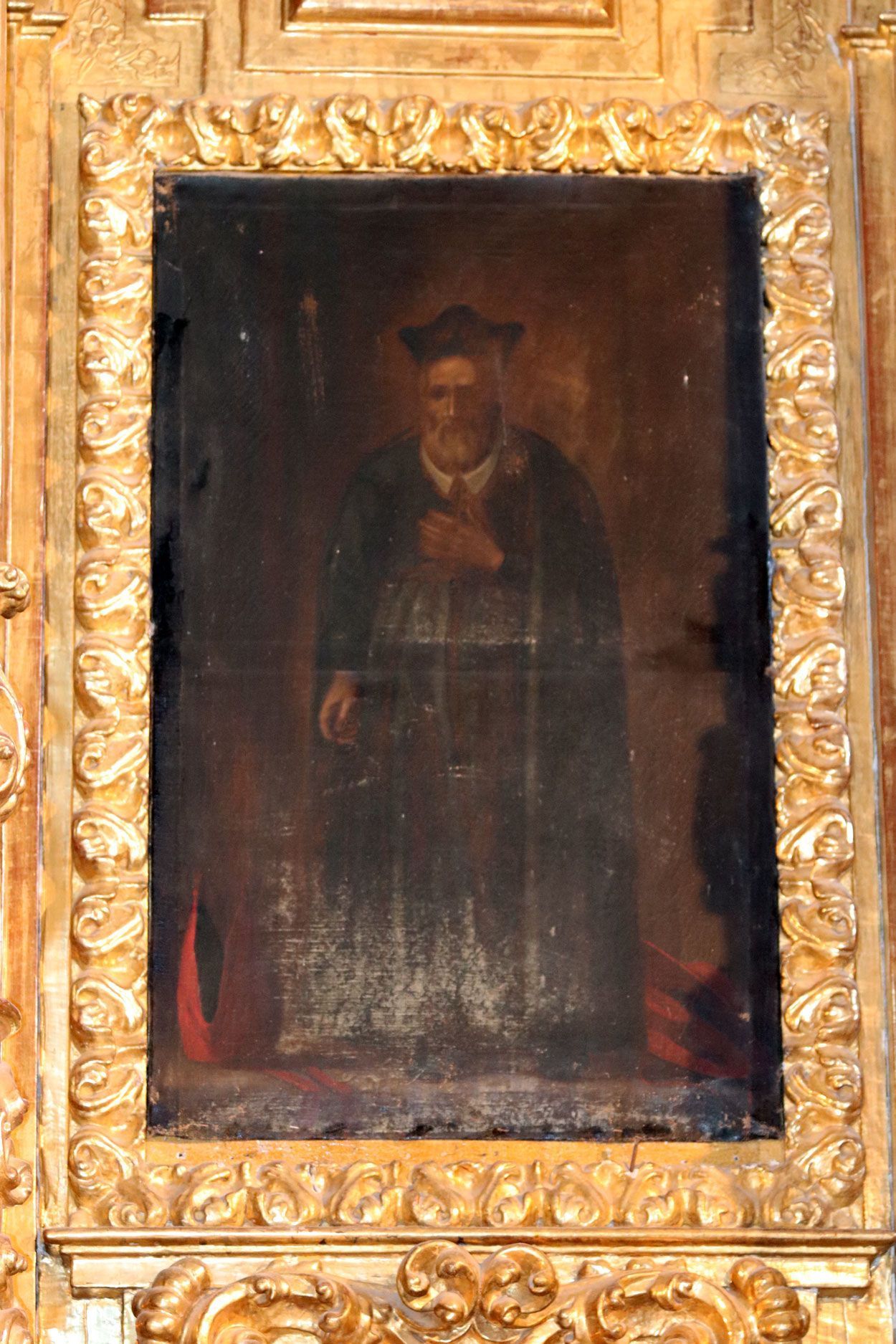 Saint Peter’s parish church is a building that has undergone various transformations throughout time. Most of the elements that we see today are due to the restructuring suffered during the 18th century, which gave it the baroque appearance that predominates today. In order to carry out this important renovation, the materials of the previous Romanesque church were used, so we can see some reused elements integrated into the walls. One of the most curious details might be the reuse in a corner of the head of a Pre-Romanesque window with two openings, which has been placed horizontally. 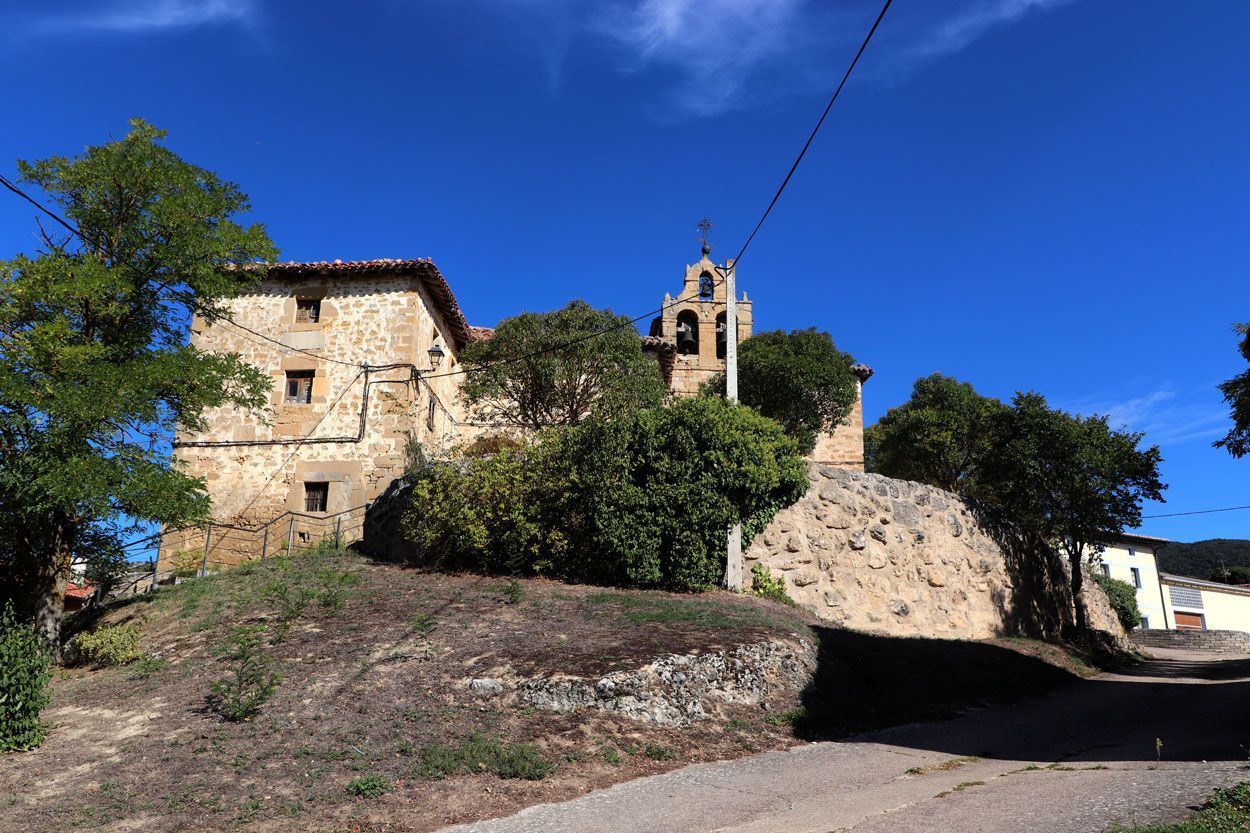 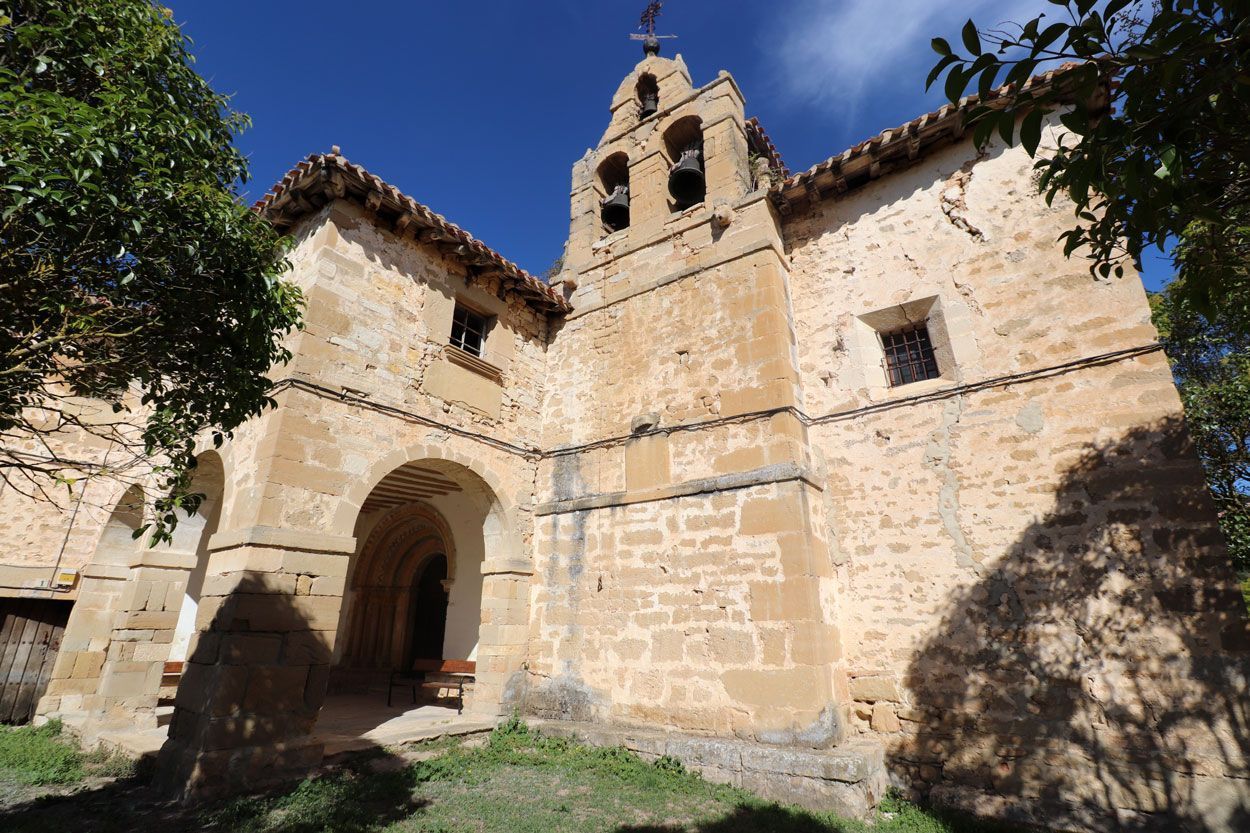 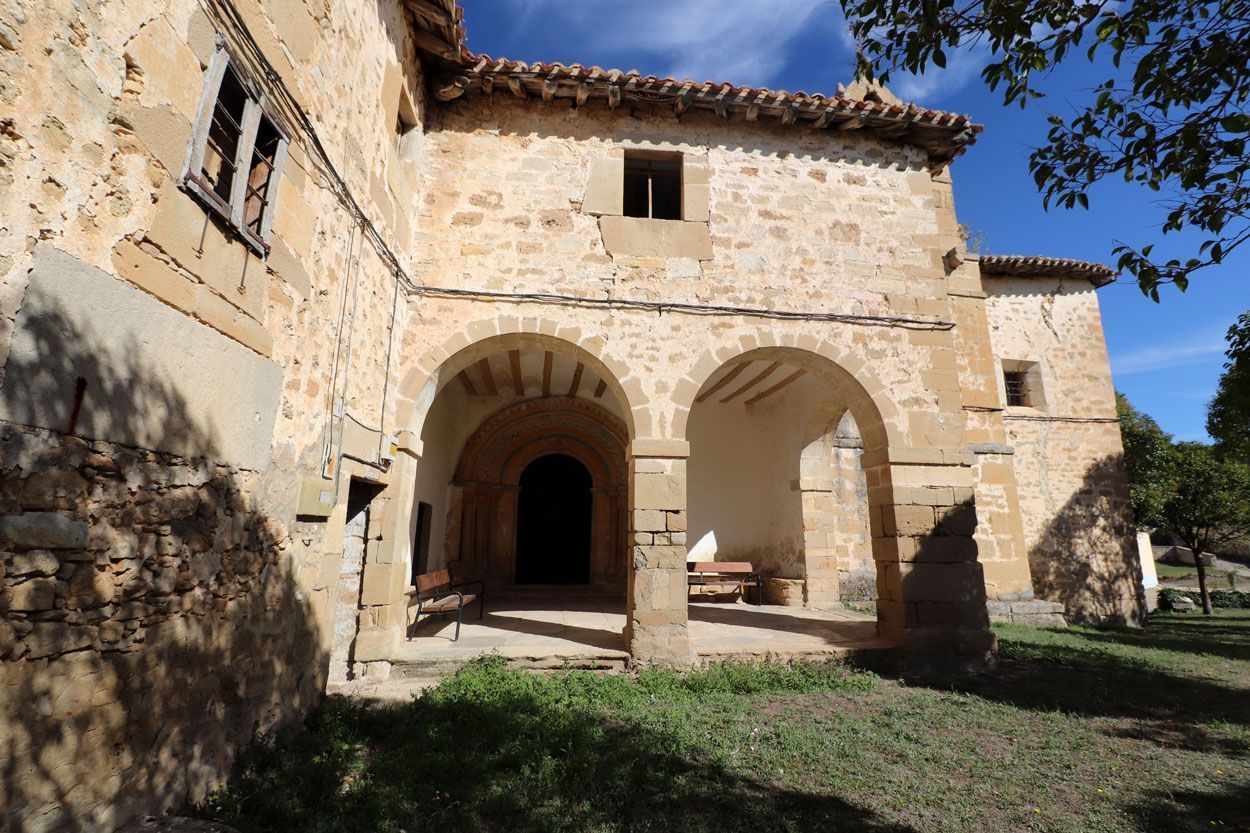 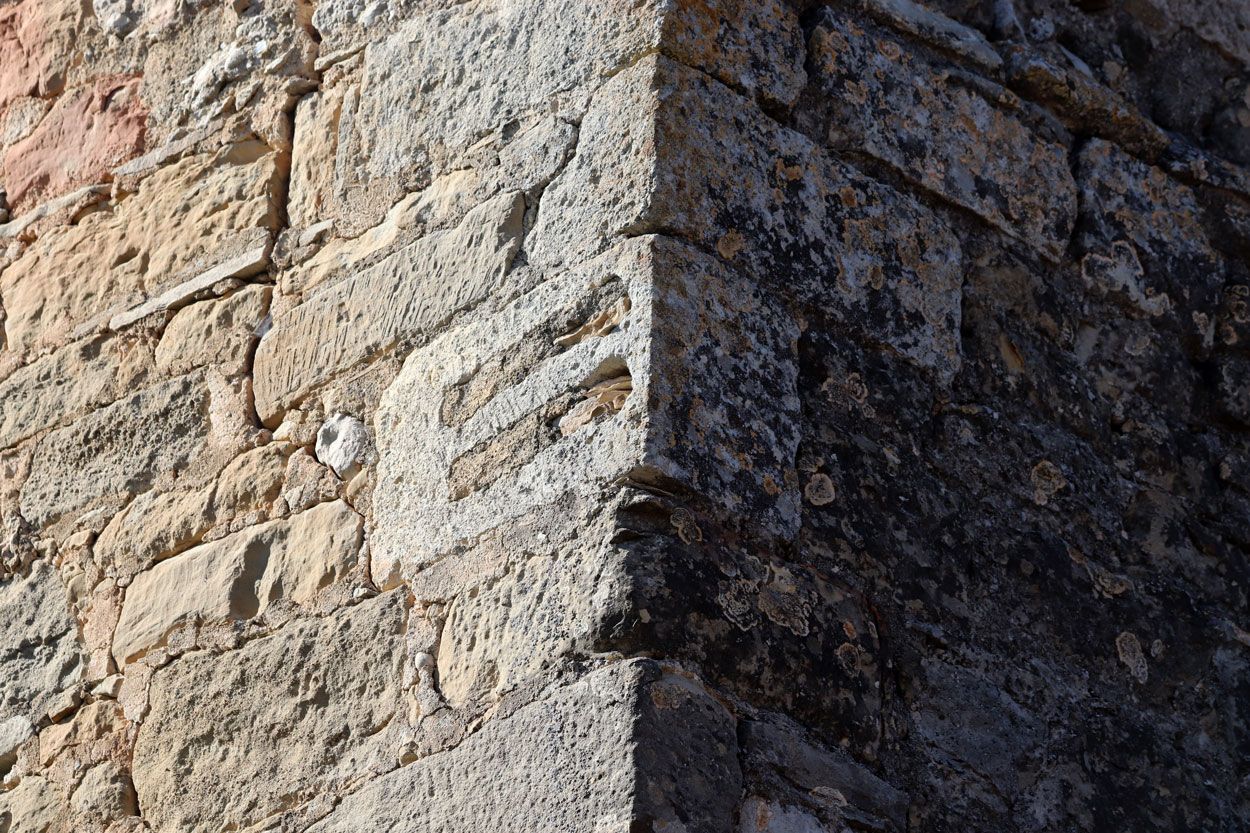 The bell gable was built in 1783, after the collapse of the previous one. Inside the church, a life-size trace of this bell tower made by the builders themselves is still visible on the floor. They possibly drew its shape as a template to place the carved stones above and adjust them before raising it over the north wall of the church. Under the bells, on the cornice, two mysterious figures with hideous faces stand out. They have a hole in the middle, as gargoyles. It is likely that they are reused pieces from the primitive Romanesque church. 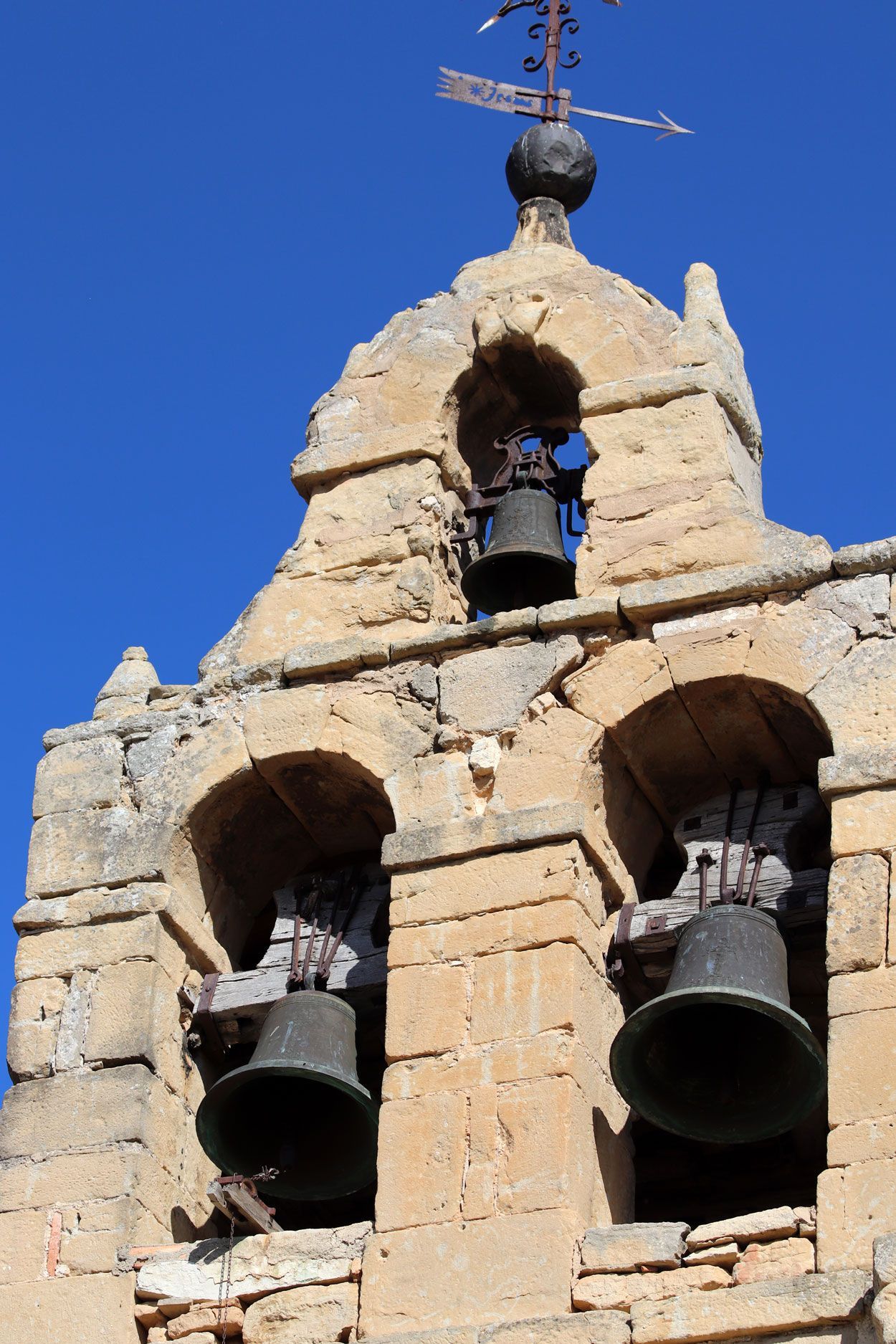 Under the portico of the 18th century, we find one of the most interesting medieval remains of the temple: the Romanesque facade. In the archivolts we see a decoration based on flowers or perforated circles, extensive zigzag lines and four-pointed stars, very typical of the Romanesque style of this area. The capitals show us schematic vegetation, four-legged animals whose species is hard to specify and a face that appears between the vegetation. 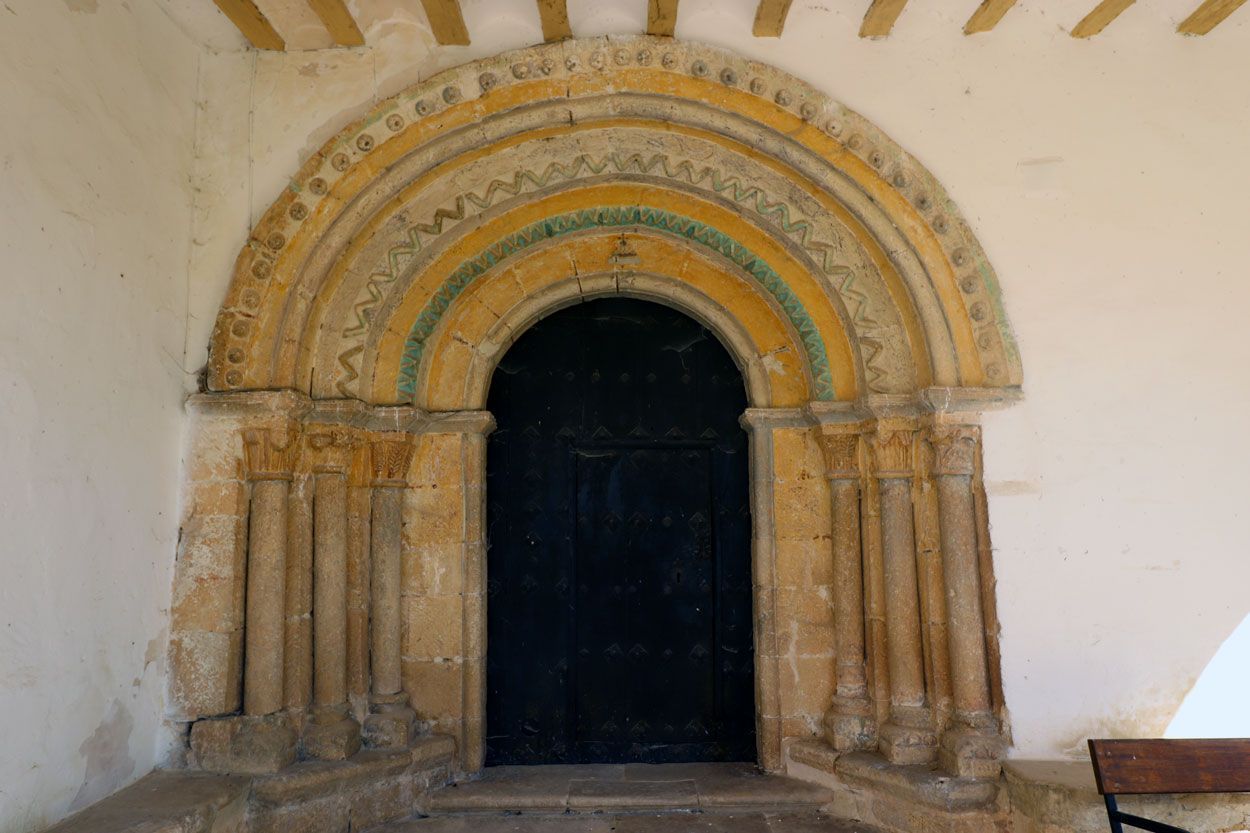 This facade preserves polychromies from different eras that are placed on top of each other. The blue and yellow pigments, together with the cross over the arch of the door, seem to correspond with a repainting of the baroque renovation. However, the remains of the medieval painting appear below, consisting of fragments in red colour that can be seen in several areas of the facade. Another interesting detail is the consecration crosses that adorn the doorjambs and one of the archivolts. This type of cross pattées is due to a medieval consecration ritual of churches, rare in Álava and Treviño, this temple being one of the few examples that are preserved in these territories. 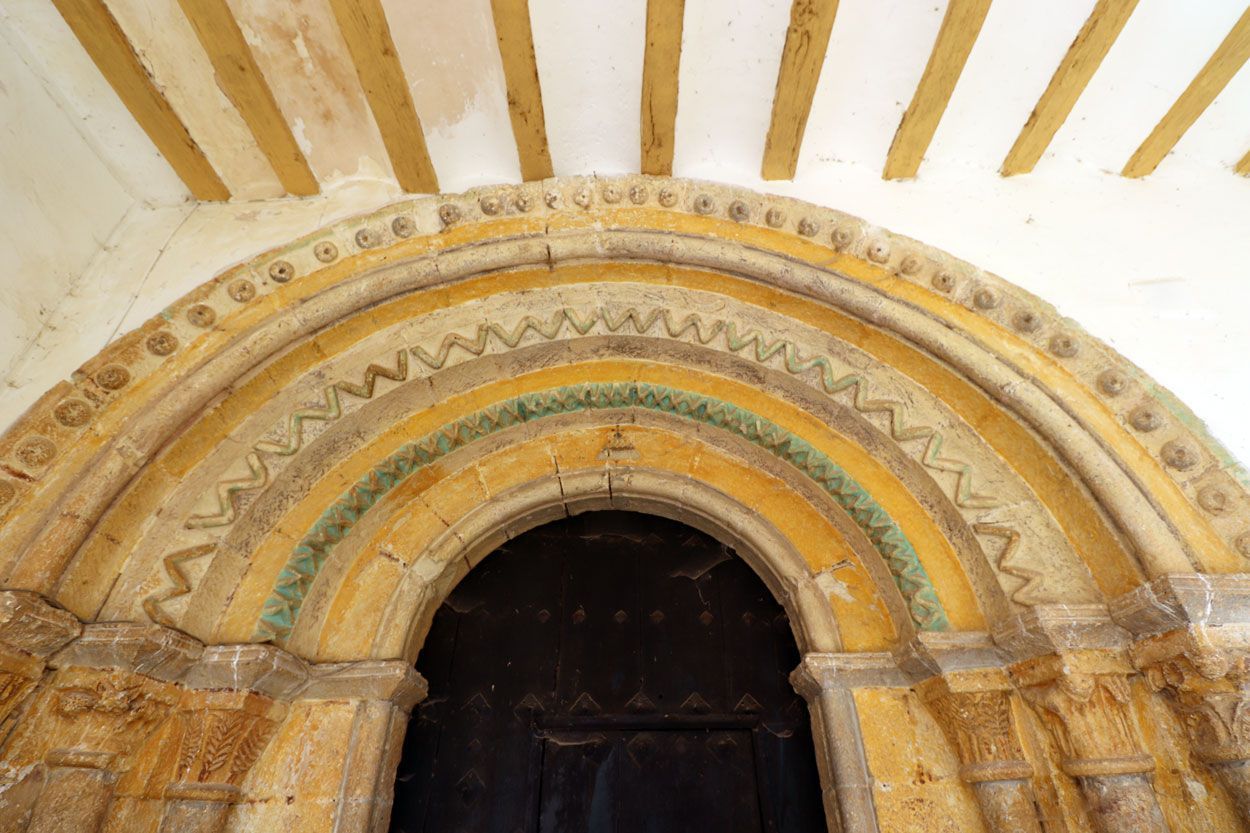 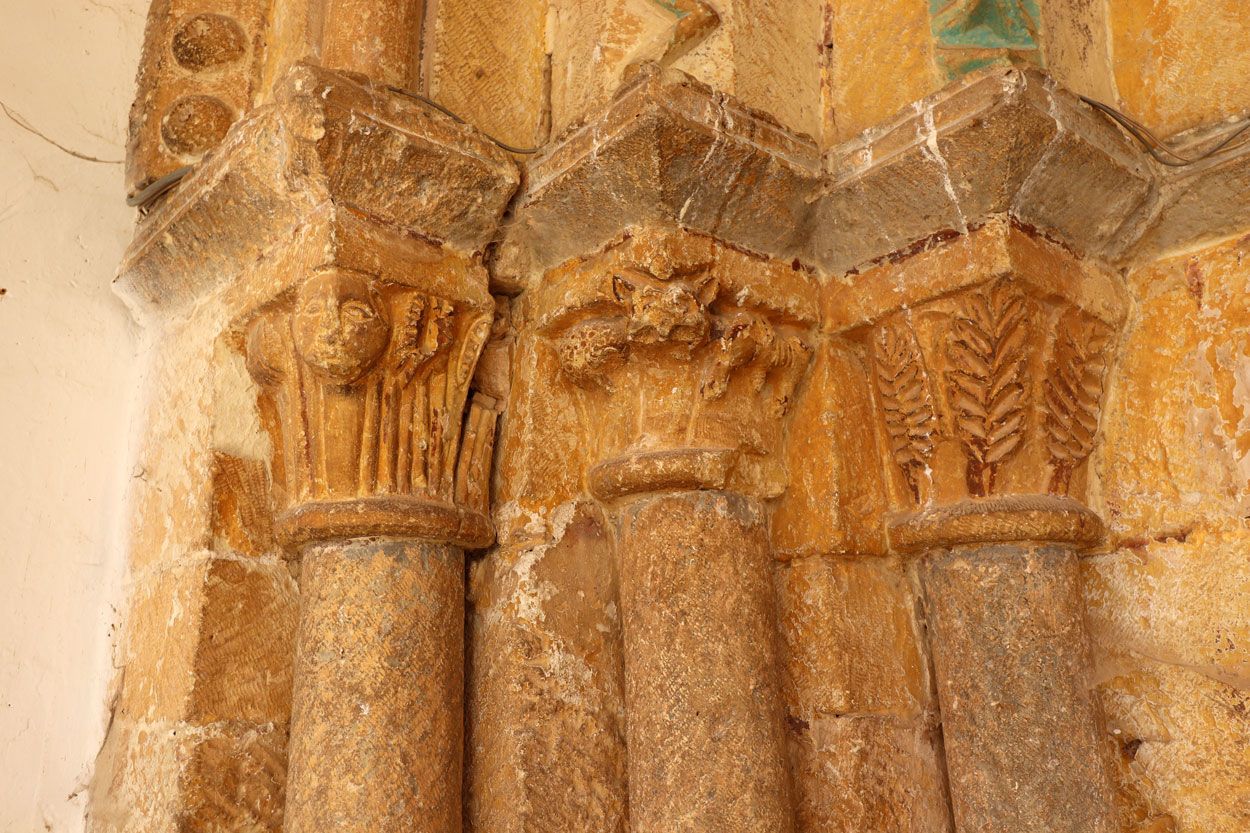 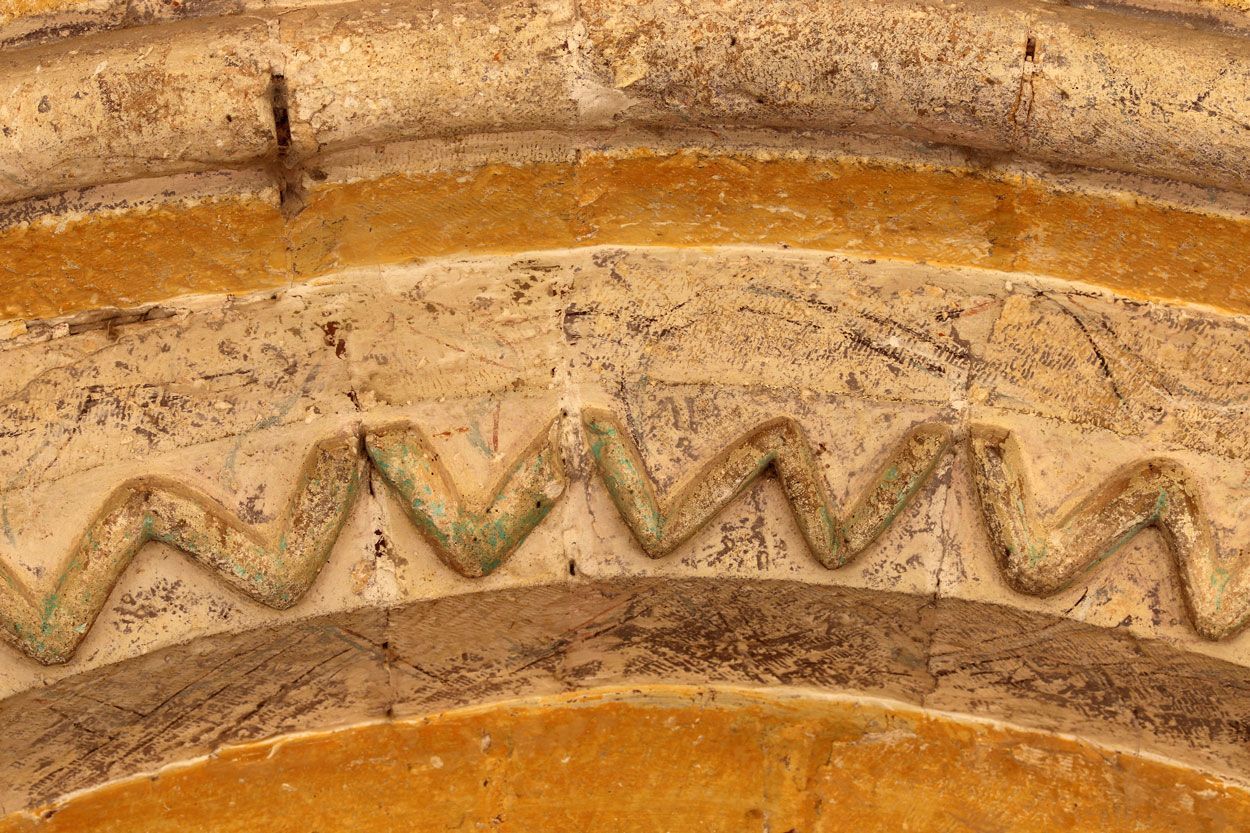 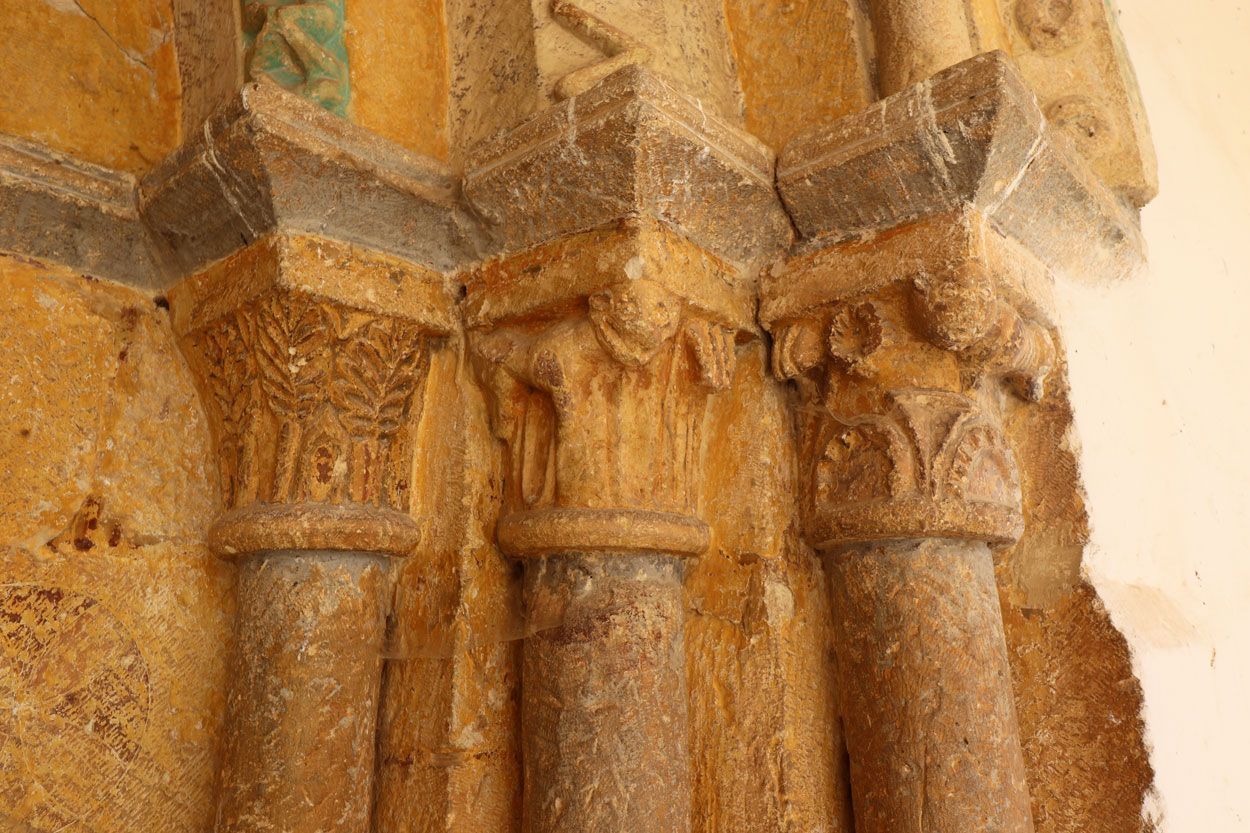 Inside, the baroque appearance predominates thanks to the groin vaults with typical lunettes of the 18th century. A good set of altarpieces of the same period takes centre stage. On the main altarpiece we find an exceptionally carved figure of Saint Peter with a papal tiara, sitting in the cathedra with the keys in his hand and stepping on the head of Simon the Magician. Three canvases painted by the workshop of the Arroquias in Vitoria are located around, in which Saint Stephen, Saint Philip Neri and Saint Augustine are represented. The architect from Estella, Juan Ángel Nagusia, was responsible for making the frame, completely gilded and reminiscent of the Churrigueresque style. 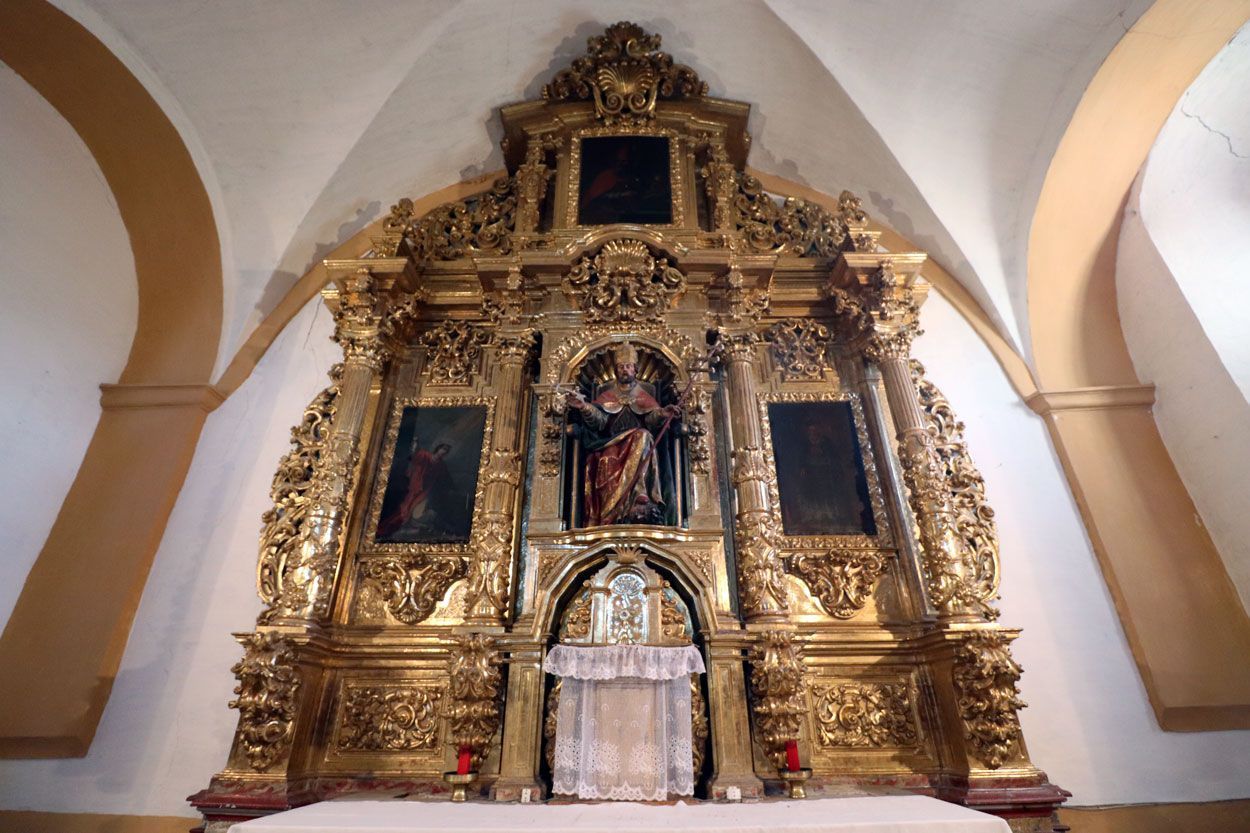 The side altarpieces follow the same line as the main one and were carried out jointly, so the authorship is the same. On the one on the left we see Our Lady of the Rosary surrounded by figures from different eras and, at the top, a painting of Saint Joseph with the Child. The wall of the chapel in which it was located preserves the remains of the mural paintings that were carried out during the renovation of the 18th century and that represent a dossal curtain opened by angels. These types of paintings, together with the altarpieces, show a very typical scenography in this period. 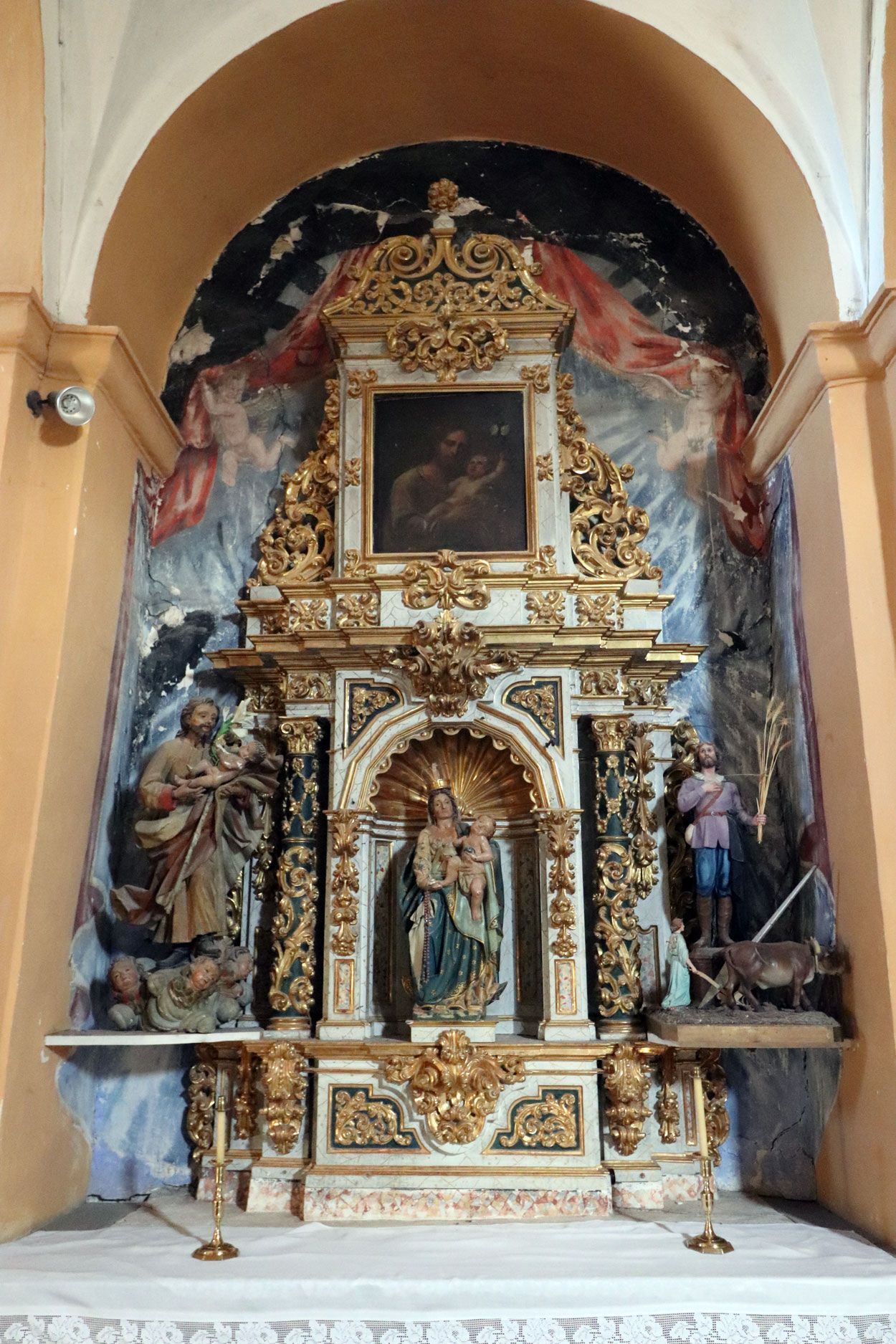 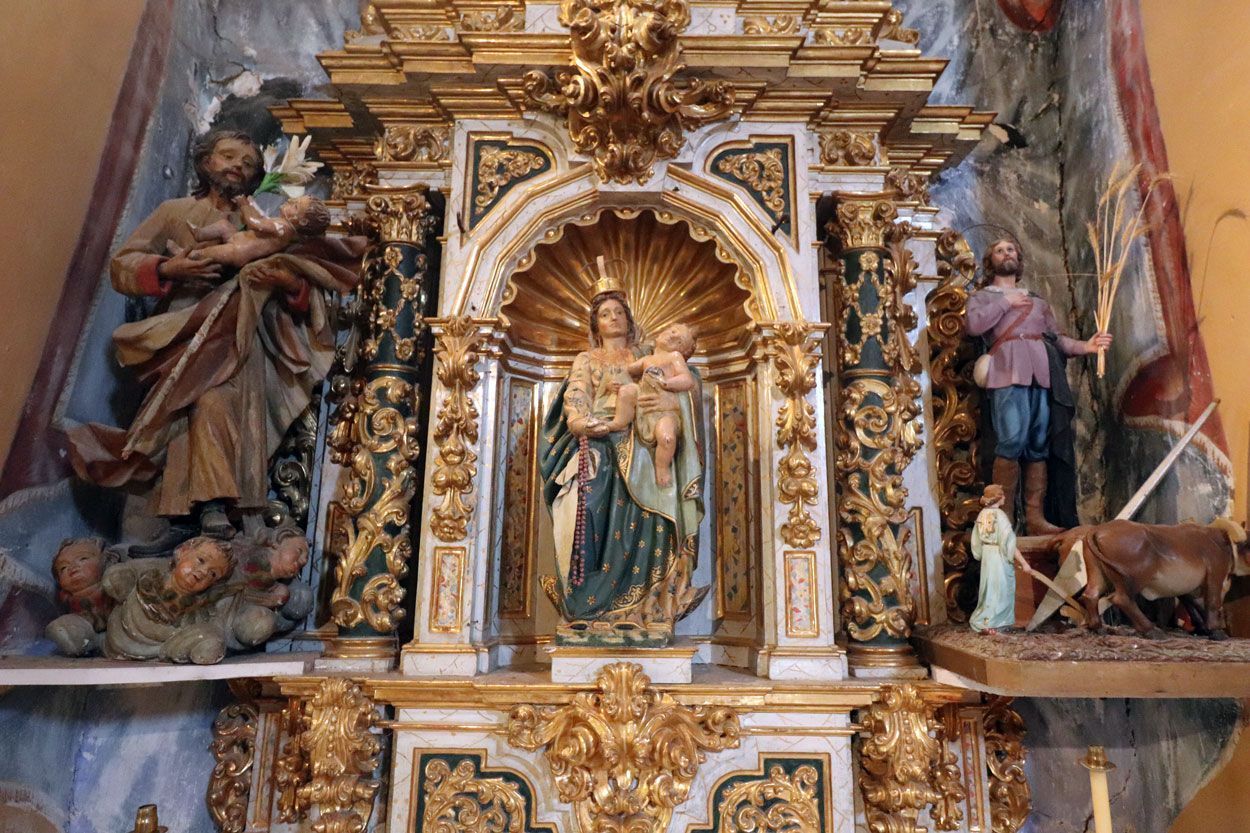 The structure of the altarpiece on the right changes to host a Calvary with a painted background of the city of Jerusalem, with the figures of the Virgin and Saint John. At the top, a painting of Saint Anthony of Padua completes the studied iconographic discourse of the three altarpieces. In the frame where the Calvary is located, we can contemplate other relocated figures, the most notable being that of the Ecce Homo. This bust of Christ, of great devotion in the town, dates from the early 16th century and has been related to the patronage that the important family of the Velasco exercised during the first Renaissance both in the town of La Puebla de Arganzón and in its hamlets. 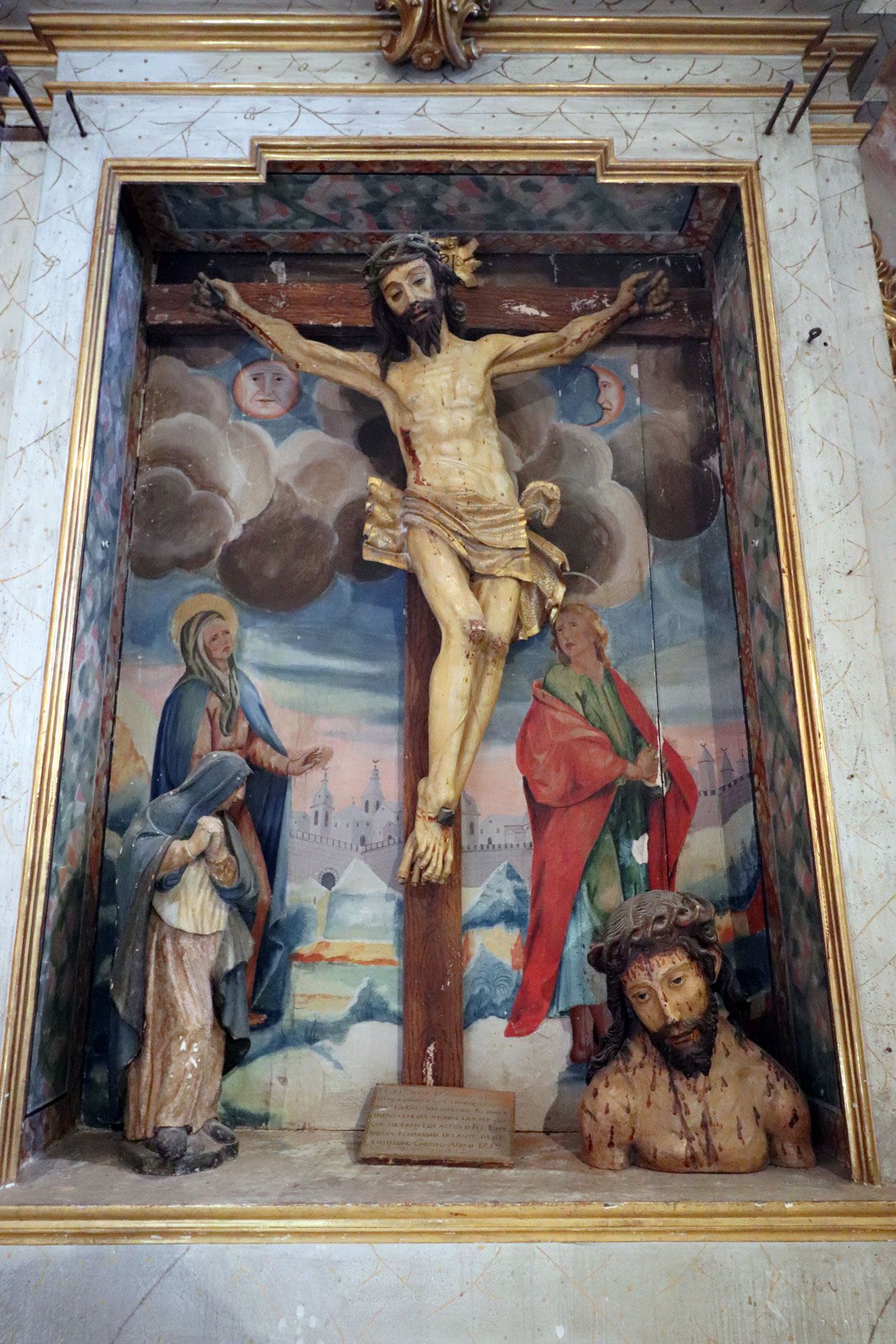 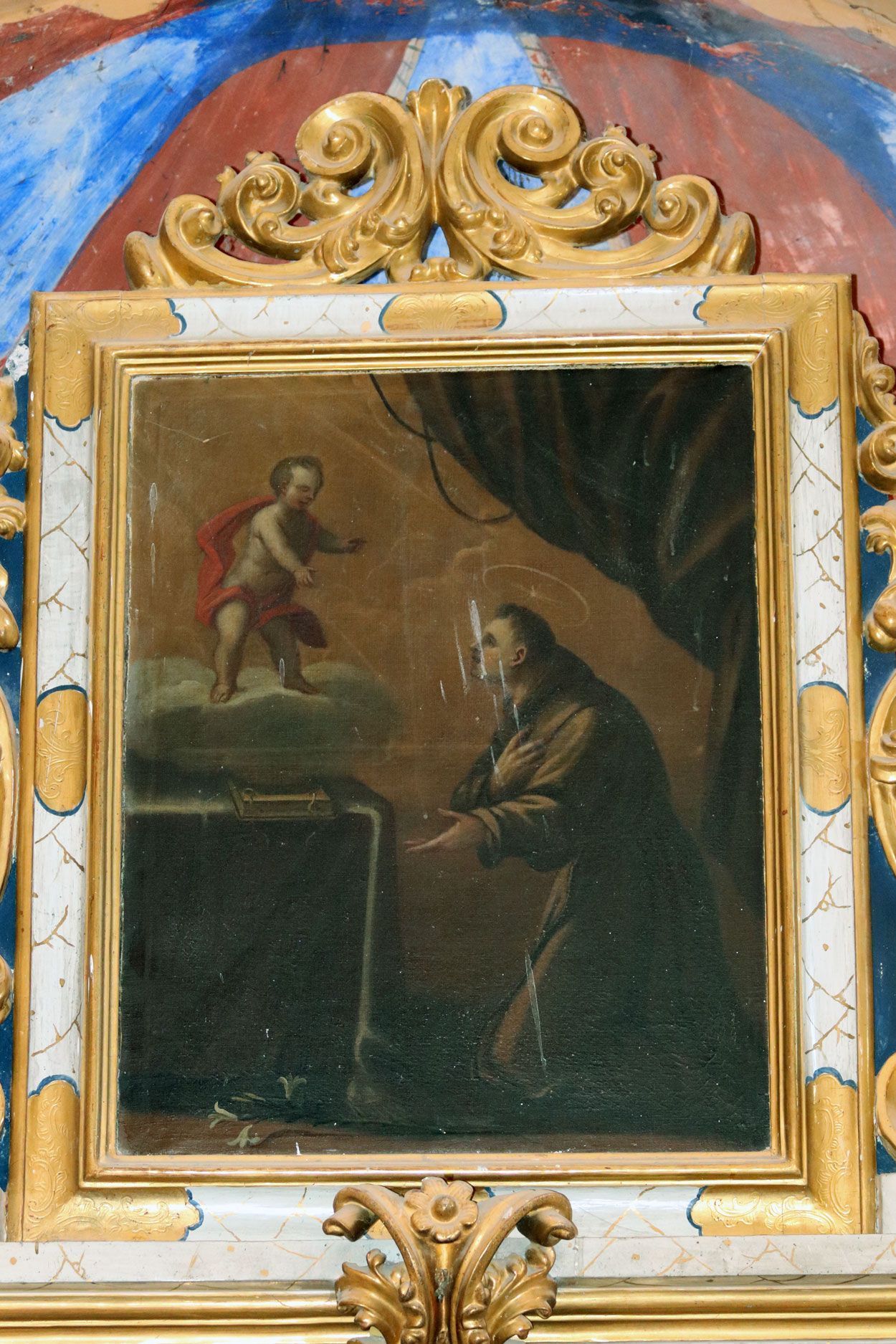 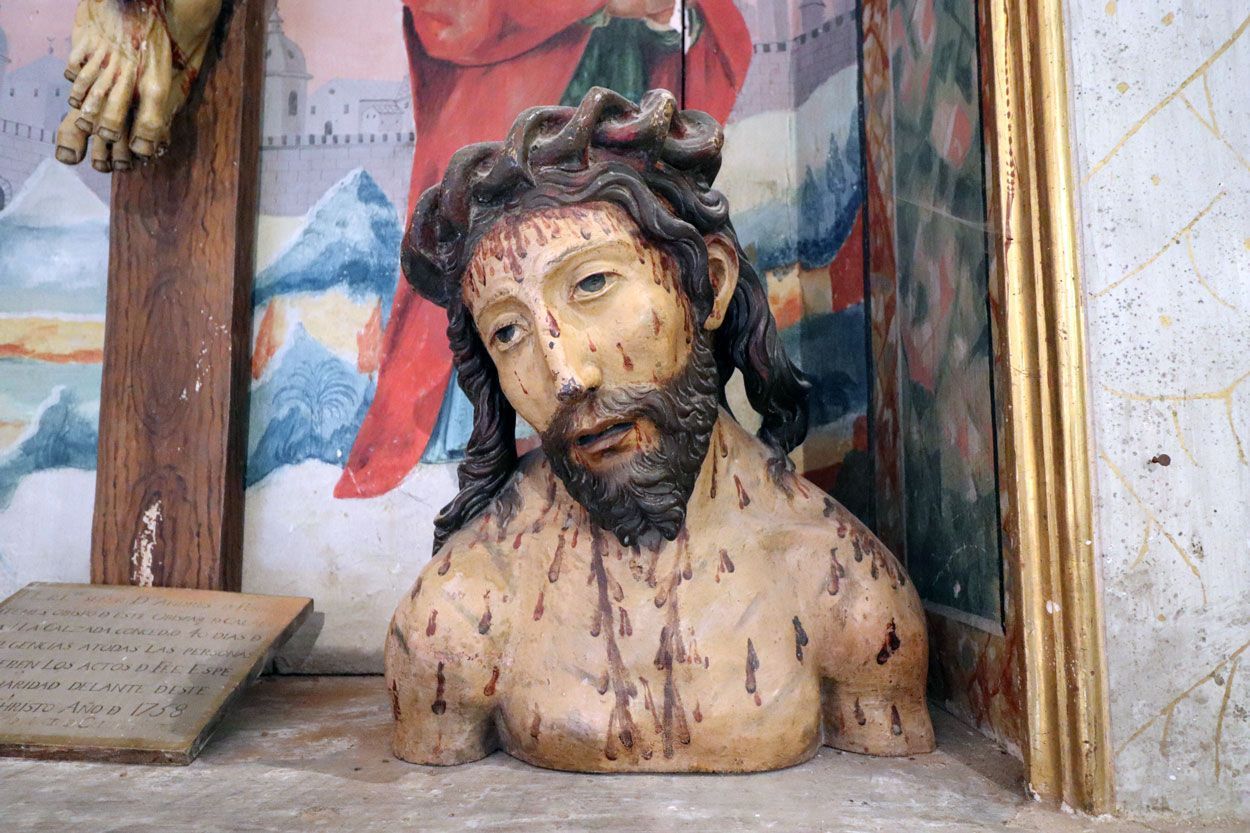 Other elements of interest are the baptismal font, rebuilt in the 18th century using the remains of a Gothic tabernacle of the 15th century for the base; or the carving that is guarded in the sacristy, originally a Virgin and Child of the 13th century from the disappeared hermitage of Traspalacios, very modified and repainted over time. 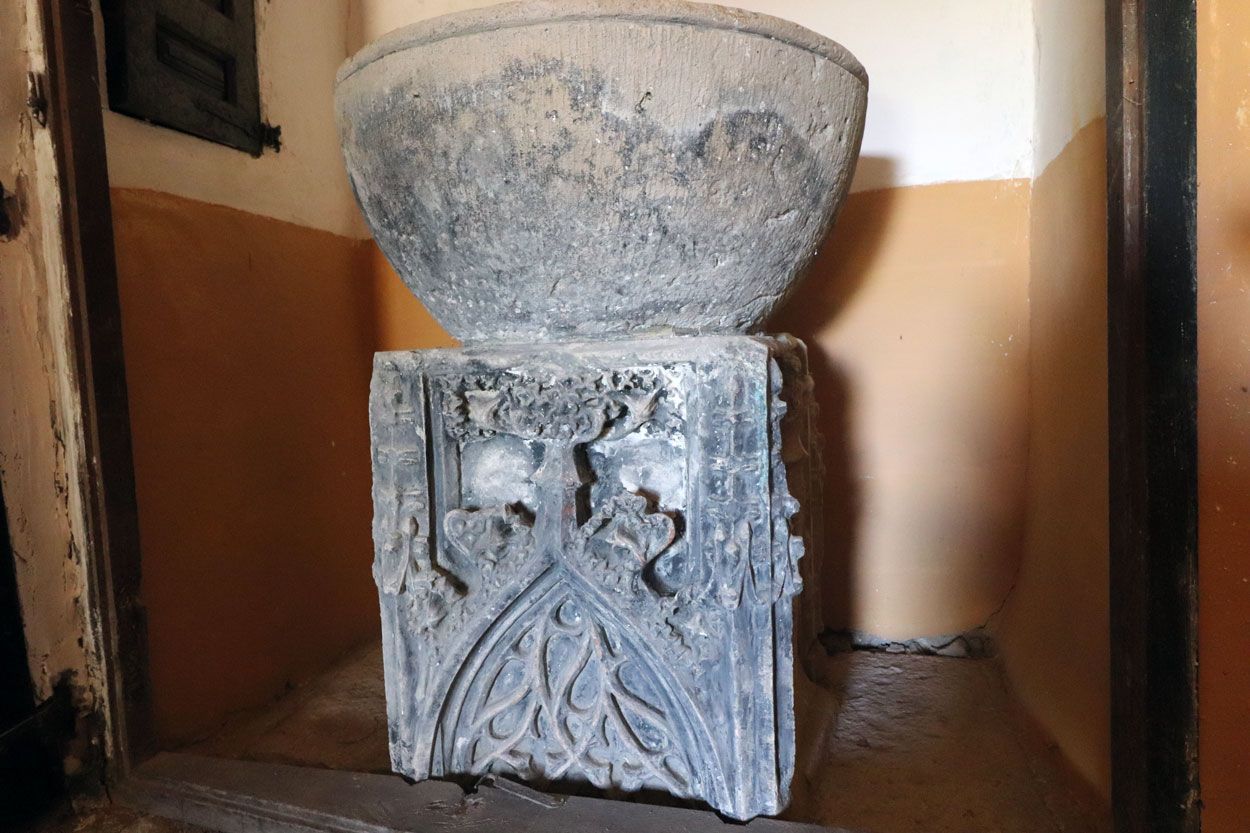 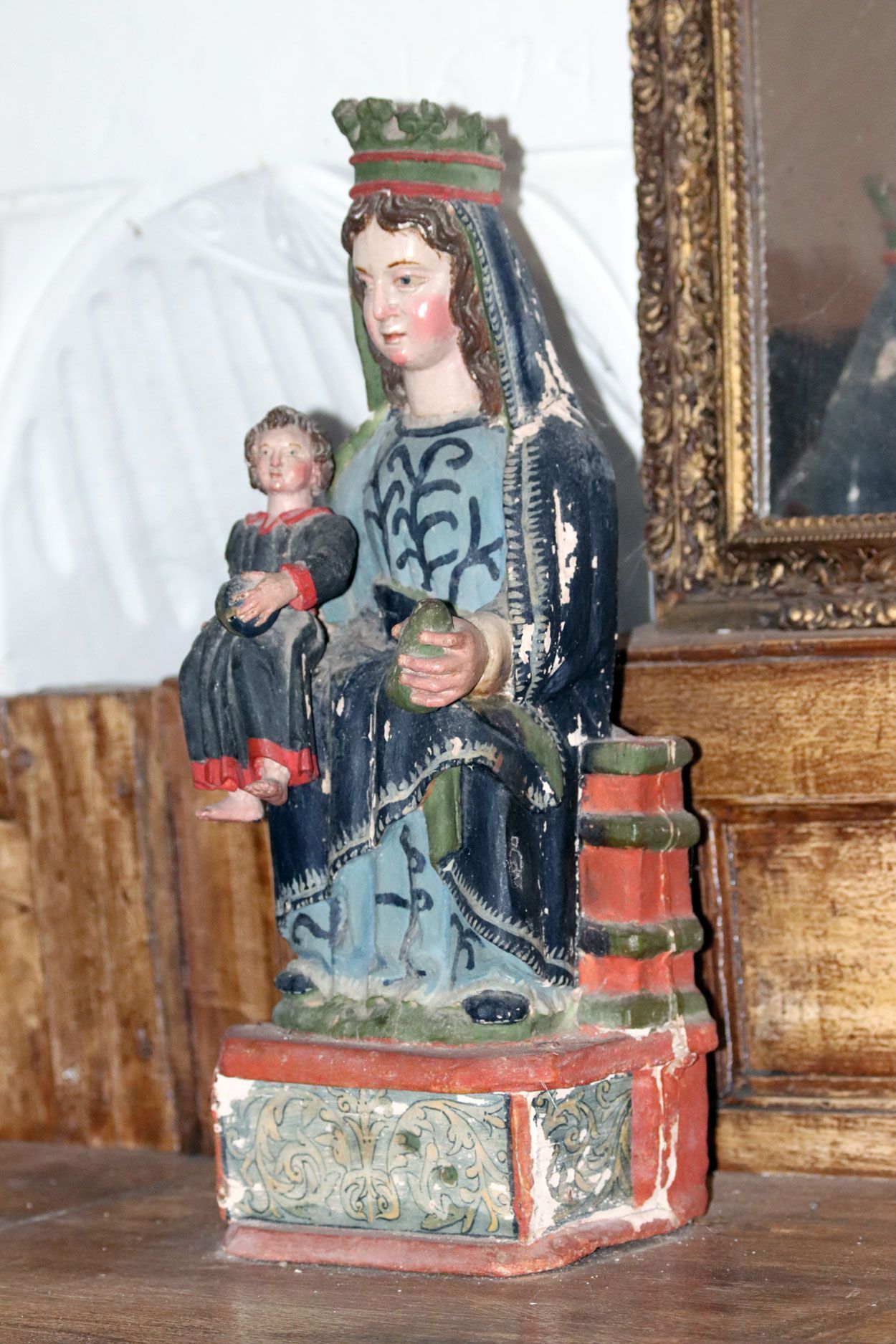 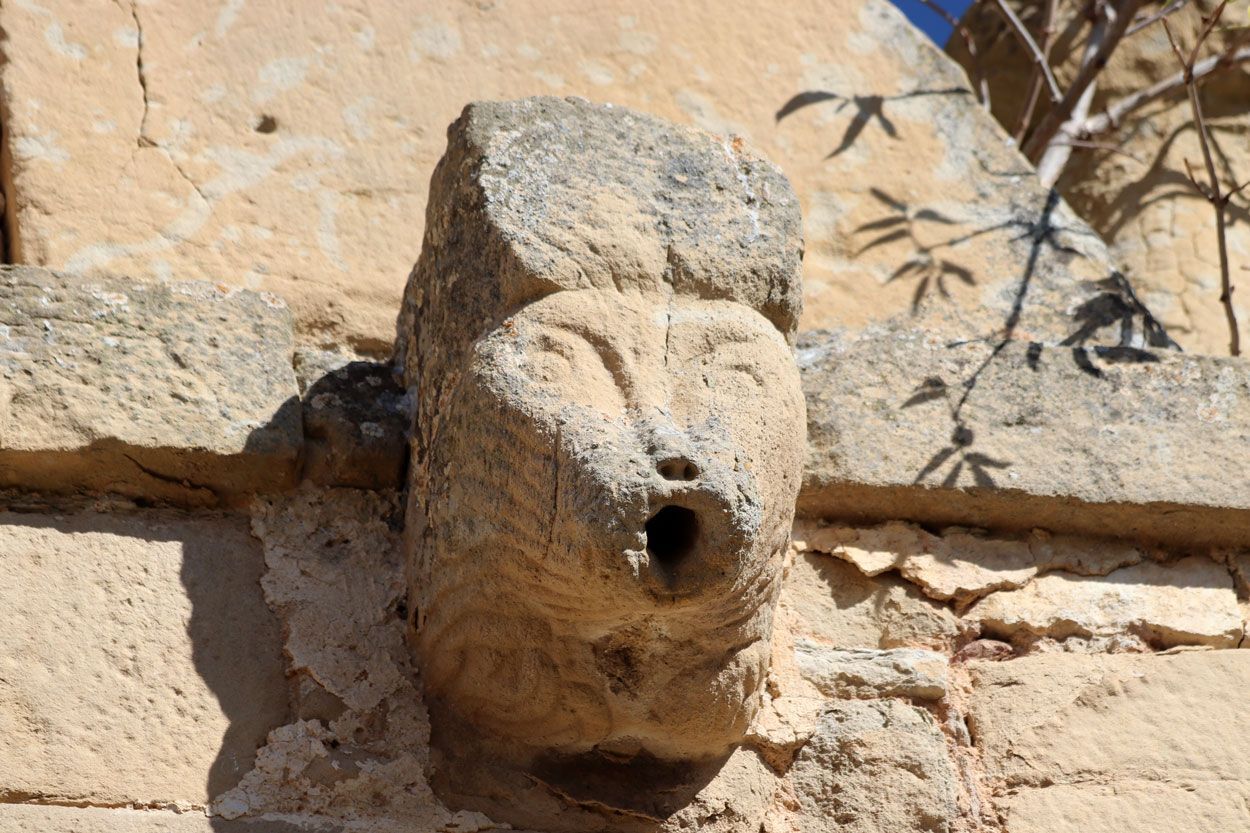 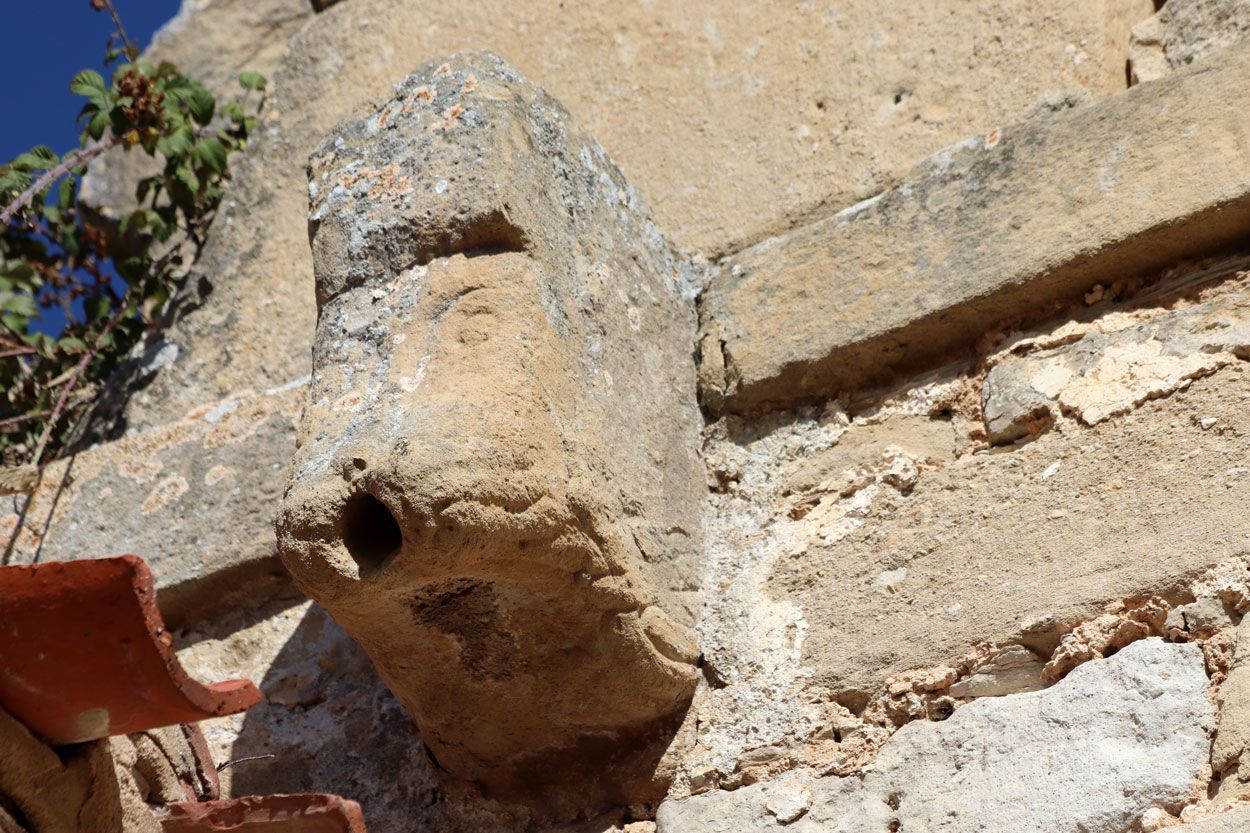