There are places whose names already tell us about their history, as is the case of Salinillas de Buradón. It was named Salinillas after a small adjoining salt mine whose use is documented from the 12th to the 19th century; and Buradón, in reference to a close castle that we know since 964. This castle was first used as a defence against Muslims and later on the battles between the kingdoms of Castile and Navarre over the control of Álava during the 11th and 12th centuries. However, this town was founded some time later, around 1264, by Alfonso X of Castile, the Wise. At that time the walls that still surround the town were built, although they have undergone important reconstructions both in the Modern Age and in the 20th century. This important town of medieval origin is one of the most beautiful and best preserved towns in the whole Álava.

Palace of the Lords of Oñate

In the middle of the town, in front of the current main square and next to the church, the palace of the Lords of Oñate stands out. These immense ruins still account for their past splendour. Built between 1631 and 1666, the palace belonged to Iñigo Vélez de Guevara, Lord of Oñate, who was born in Salinillas. This personality was a diplomat in the courts of Philip III and Philip IV and, during his trips as a consul to Savoy and Rome, he found out about the latest architectural and artistic trends that were being developed in Italy. He reflected this taste on his palace, which adopts the classicist Italian style. The four bearing walls that are still standing surround the old medieval familiar fortified tower. From this tower, the Sarmientos and the Ayalas ruled the town, which became their manor since the 14th century. Building a sumptuous palace around the medieval tower was a frequent practice among the alavaise nobility of the Modern Age. 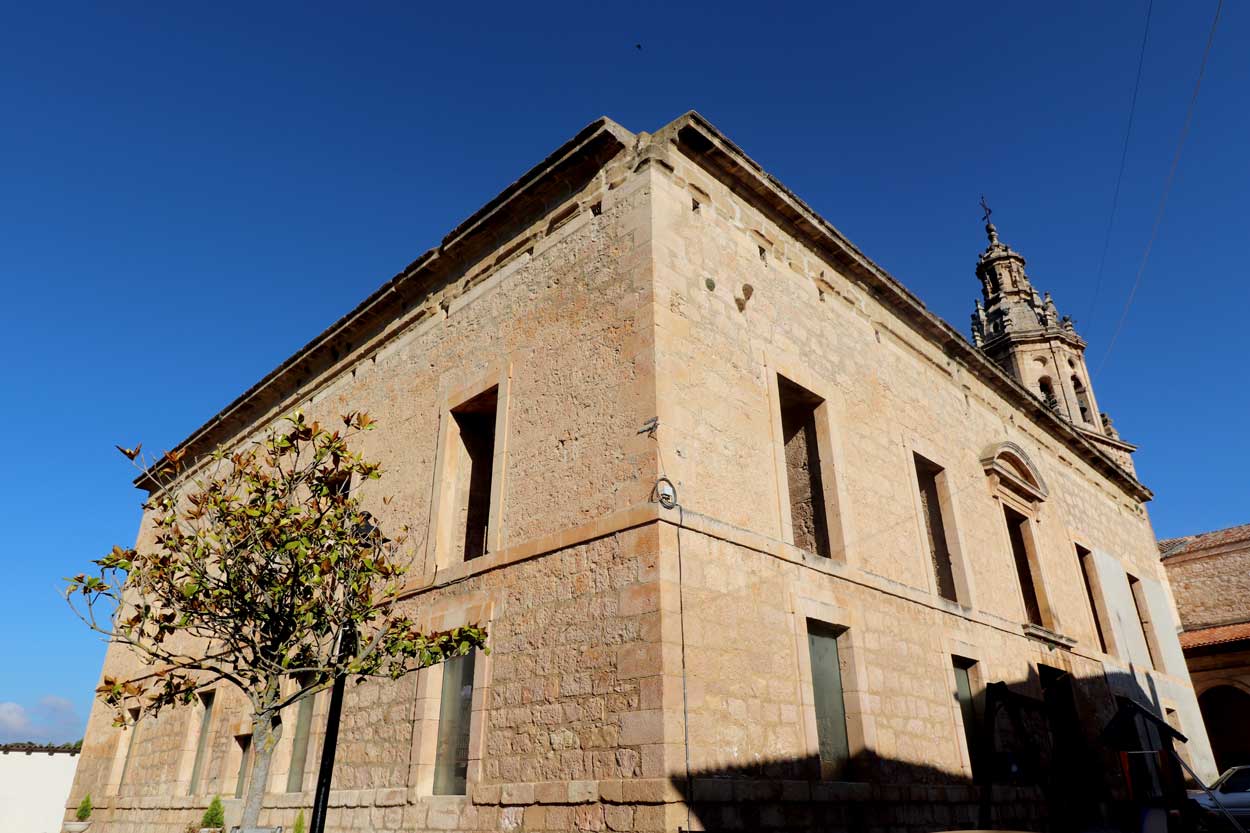 Salinillas de Buradón is a town that has managed to maintain its essence over time. Therefore, after the renovation of the walls of the early 20th century, there have been no major changes on the heritage it possesses. Nevertheless, in the old photographs that show the main square, still unpaved, we can see how the palace of the Lords of Oñate was not in such a ruinous condition yet, as the roofs were standing. On the other hand, inside the church, there are small variations, although the appearance is quite similar. The Renaissance sepulchres of Juana de Acuña y Enríquez and of her husband, Pedro Vélez de Guevara, are on both sides of the presbytery, the location they had before being moved under the choir. 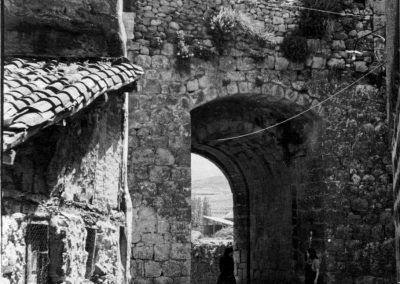 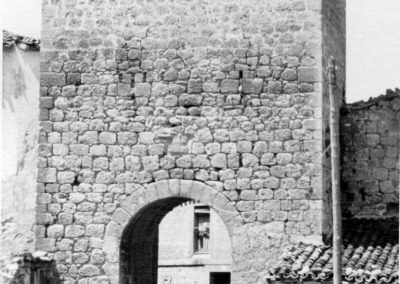 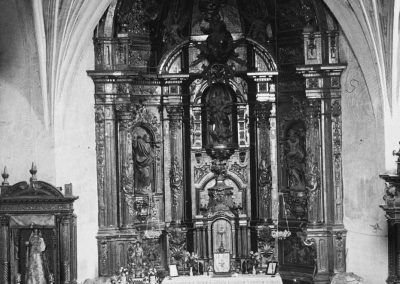 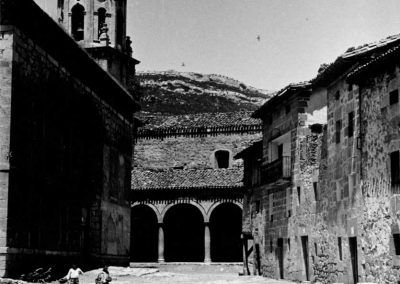 The church of Our Lady of the Conception

There is almost no trace today of the primitive church of Salinillas de Buradón, which probably dated from the 13th century, when the town was founded. Only the 16th-century manufacturing remains, which was subjected to some subsequent additions and renovations. The first thing that stands out about this building is its magnificent baroque tower, full of decorative elements and crowned by a cupola. Its height makes it stand above the walls and the palace of the Lords of Oñate. 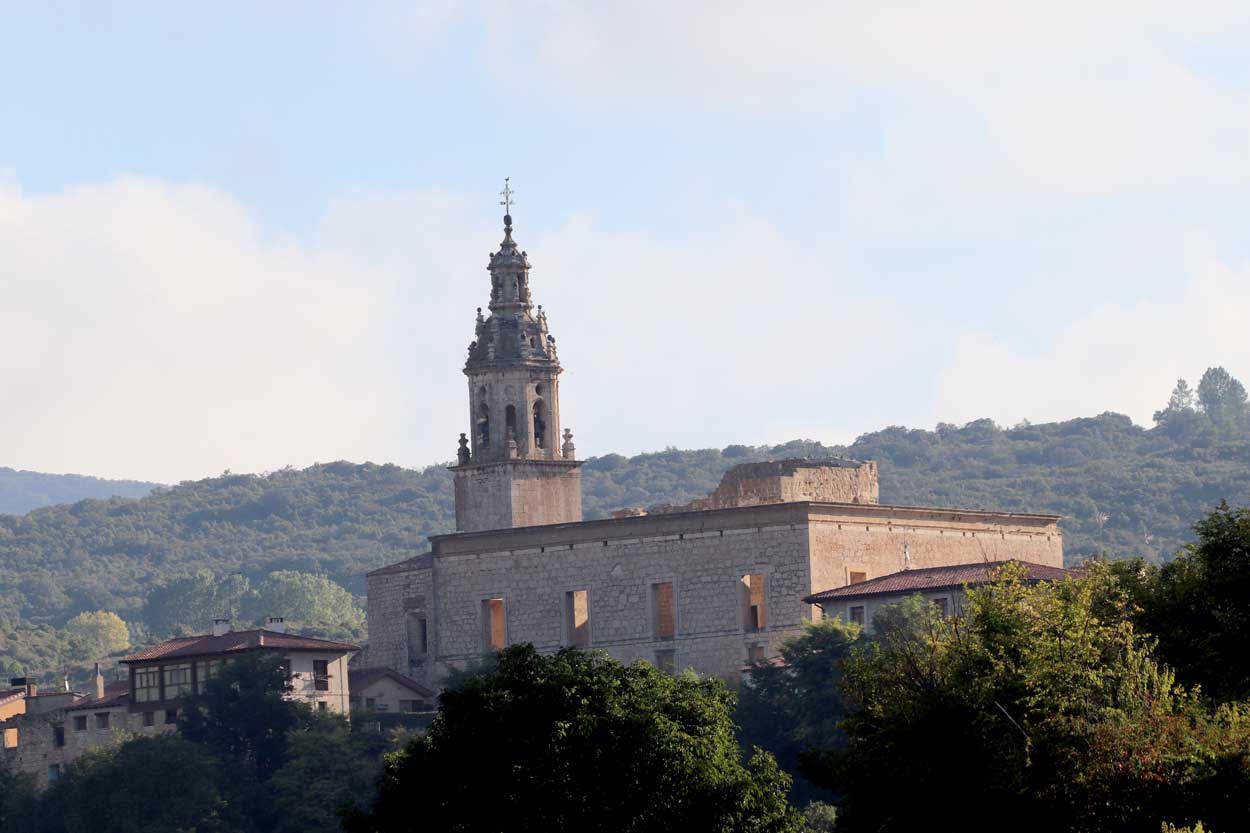 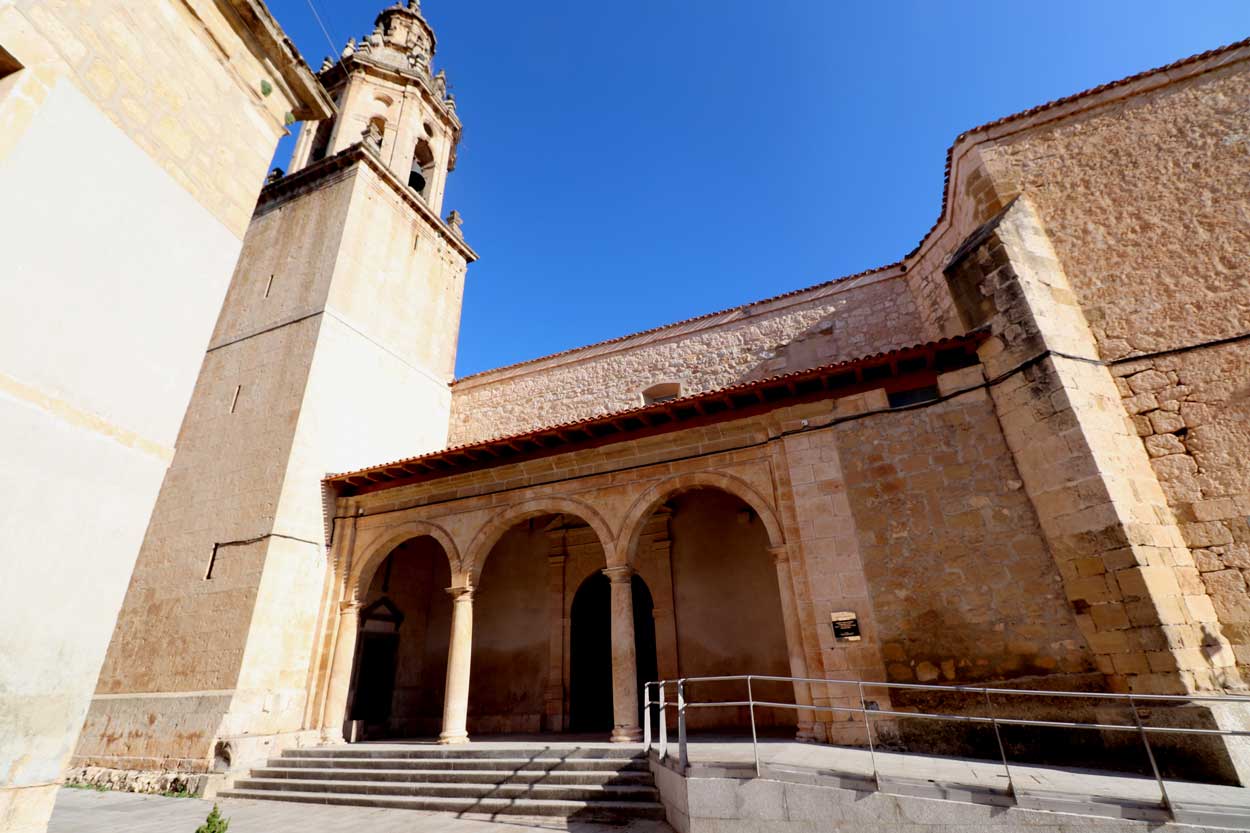 The portico that gives access to the church was built in the 17th century and houses the strongly classicist facade, with a triangular pediment ending in pyramids in which a niche holds an image of the Immaculate. 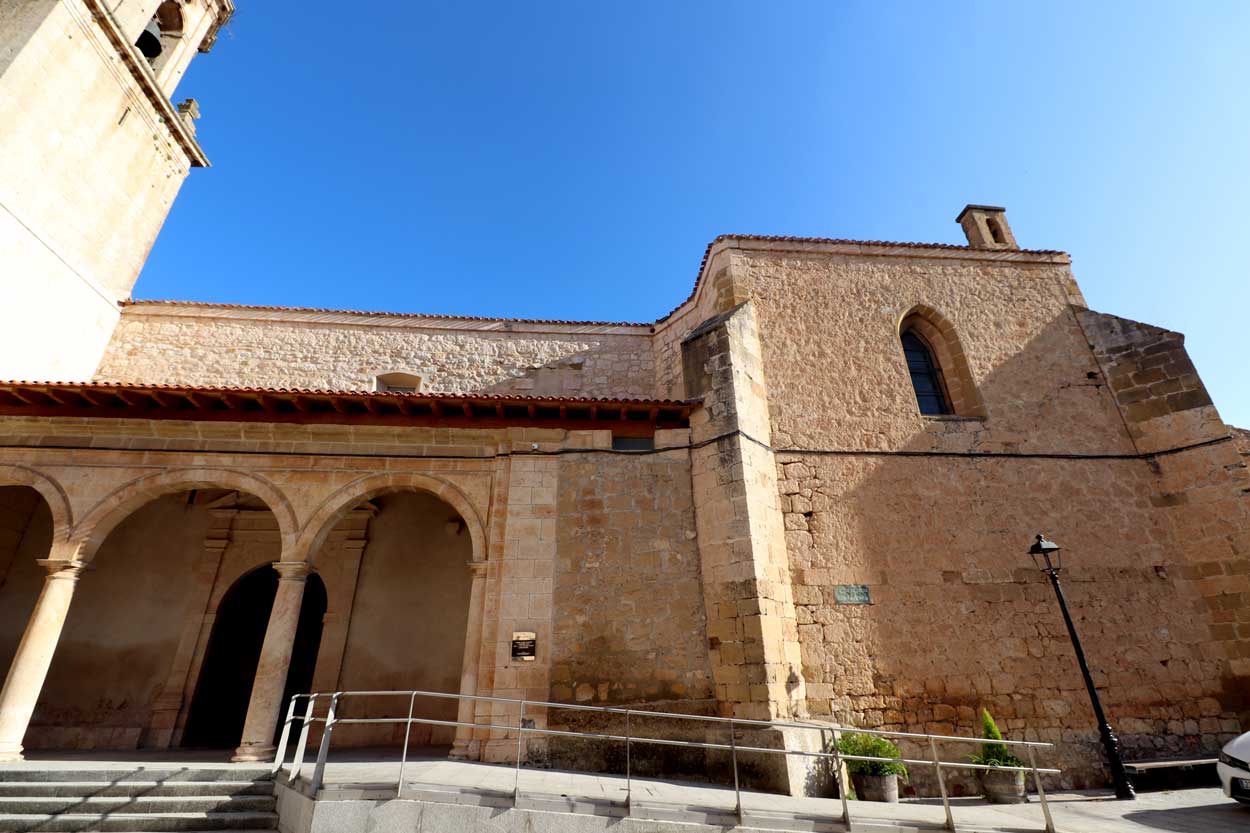 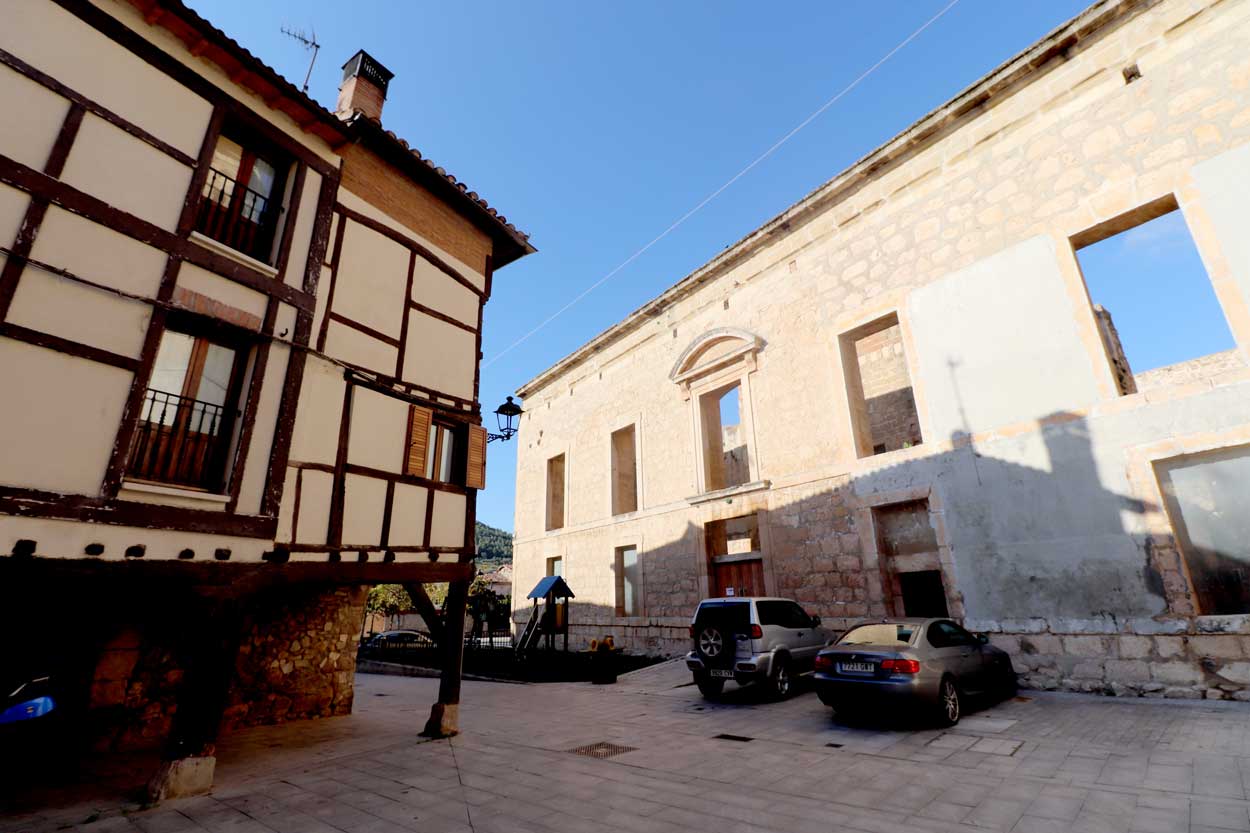 
The spacious interior is covered by star vaults of the 16th century. On the apse area we find the main altar, with a Rococo-style altarpiece ending in a semidome, completely golden, in which some figures stand out. In the middle, we find the Virgin flanked by the apostles Saint Peter and Saint Andrew, whereas the Eternal Father dominates the altarpiece from the top. We see two carved scenes on the predella that show the adoration of the shepherds and the Magi. This reredos has suffered a repainting of dubious quality that masks the quality of the carving. 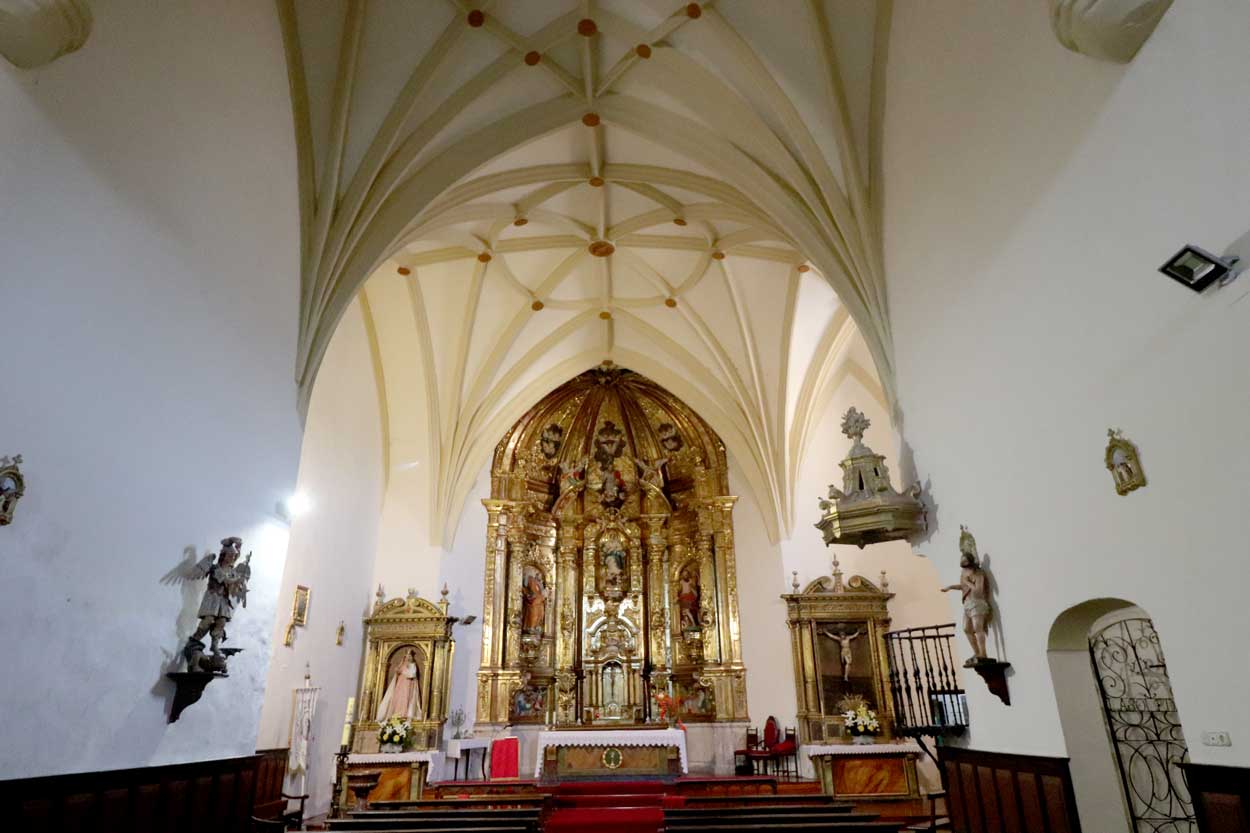 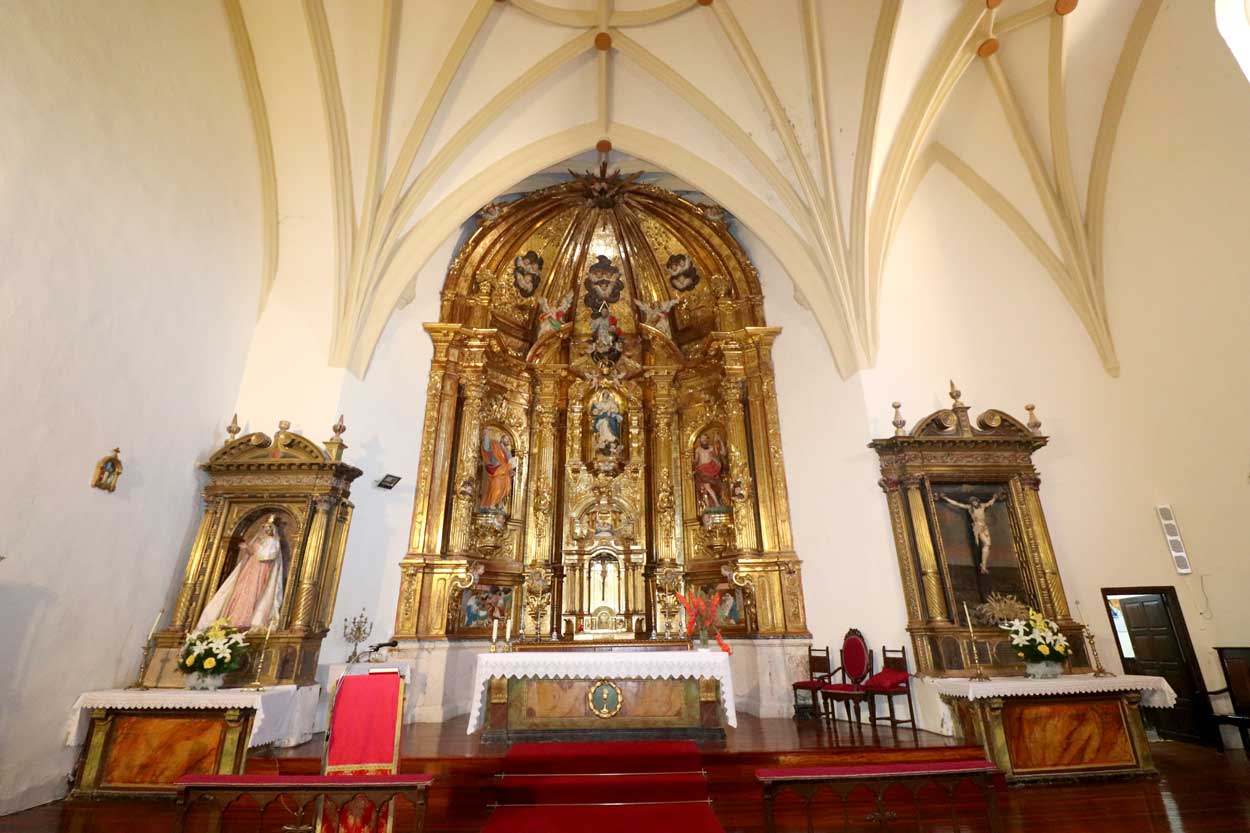 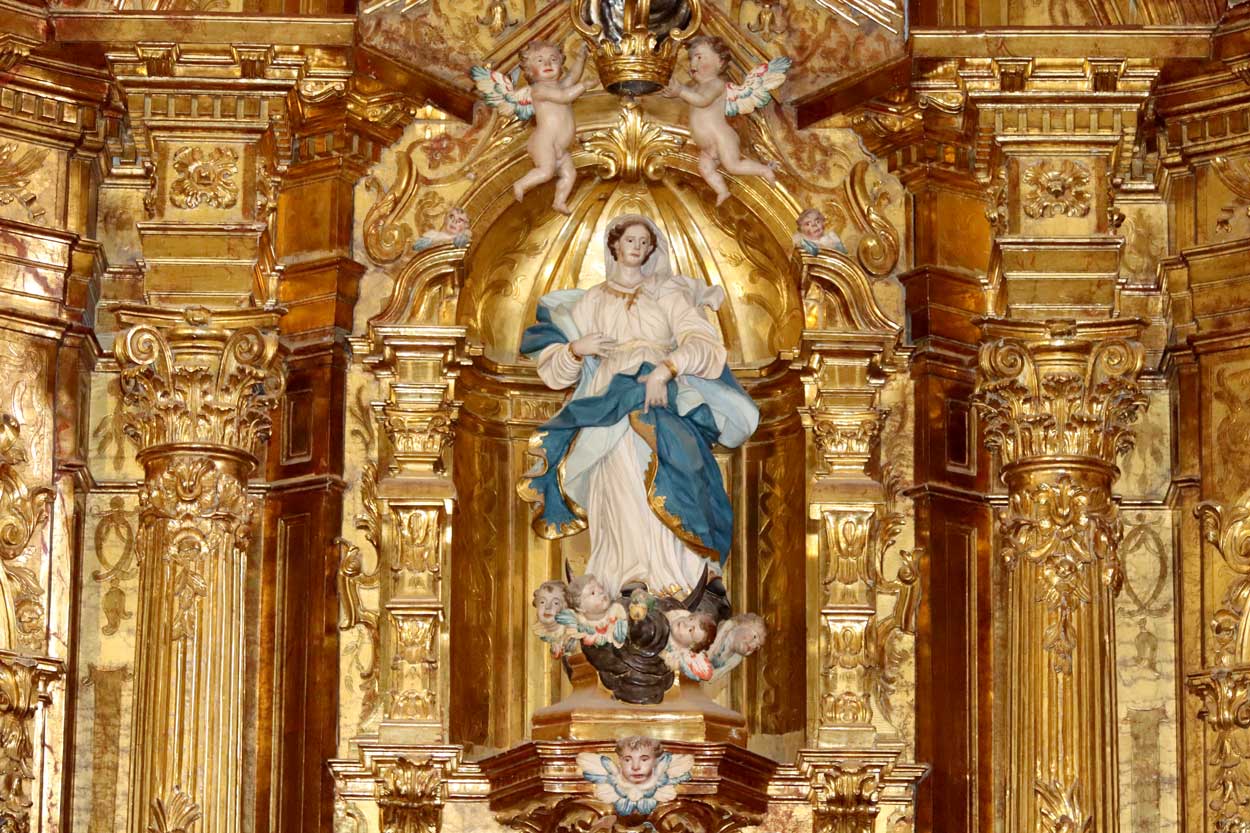 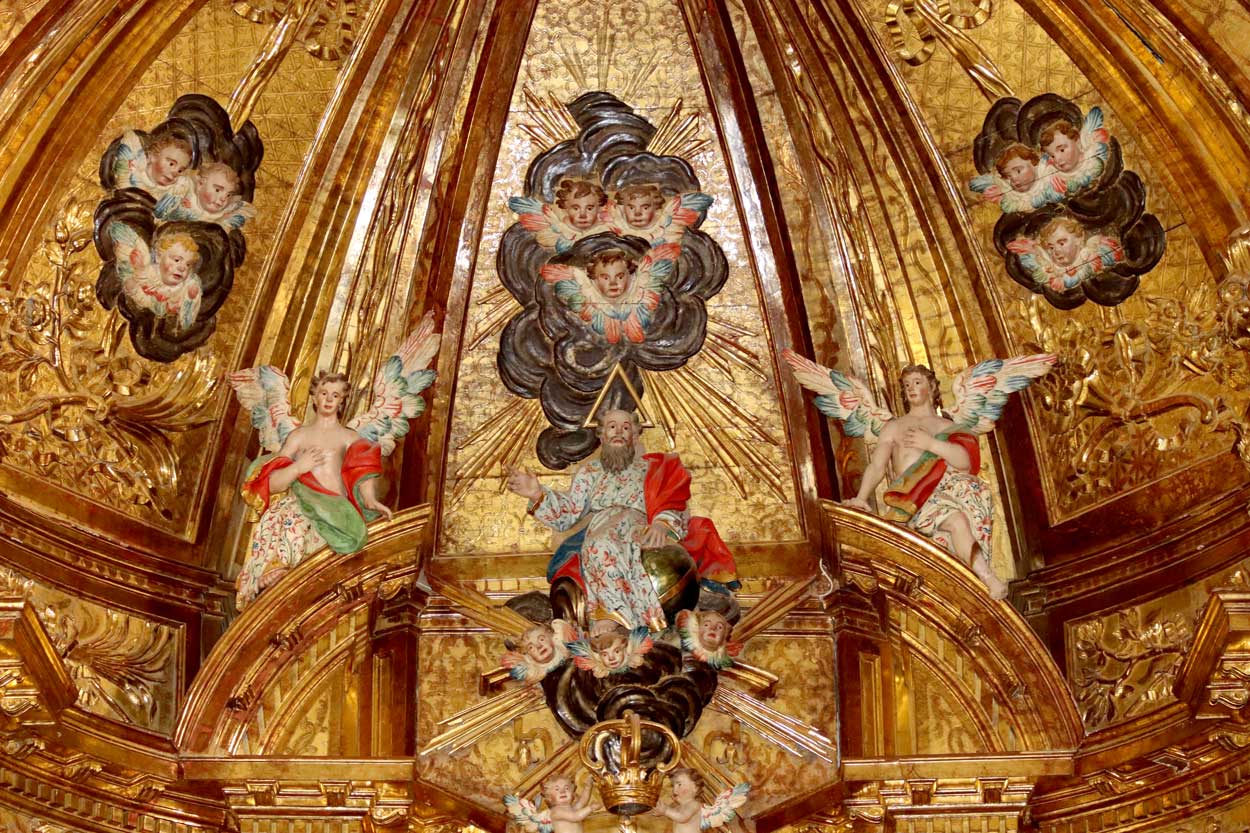 There are several altarpieces distributed across the nave and the two side chapels that form the transept. On the one on the right we find the altarpiece of Saint Christ, while on the left we see the one dedicated to the Virgin of the Rosary.
The most remarkable altarpiece is the one of the souls of the Purgatory, which shows a painting in which the damned commend themselves to Our Lady of Mount Carmel, accompanied by Saint Dominic de Guzmán and Saint Francis of Assisi.

Opposite we see a curious altarpiece-shrine of the 17th century in not a very good condition. On its central gate it housed the relics of Saint Primus and Saint John the Baptist, although the carvings it shows today represent Saint Roch, Saint Sebastian and Saint Charles Borromeo, some of them taken from other altarpieces.

There is a grilled chapel, called “of the Solitude”, where we find all the figures that were used for the Holy Week processions, including a reclining Christ with moving arms, in order to represent the Descent in a theatrical way, a Virgin of Solitude, a flagellation and a Christ carrying the cross. 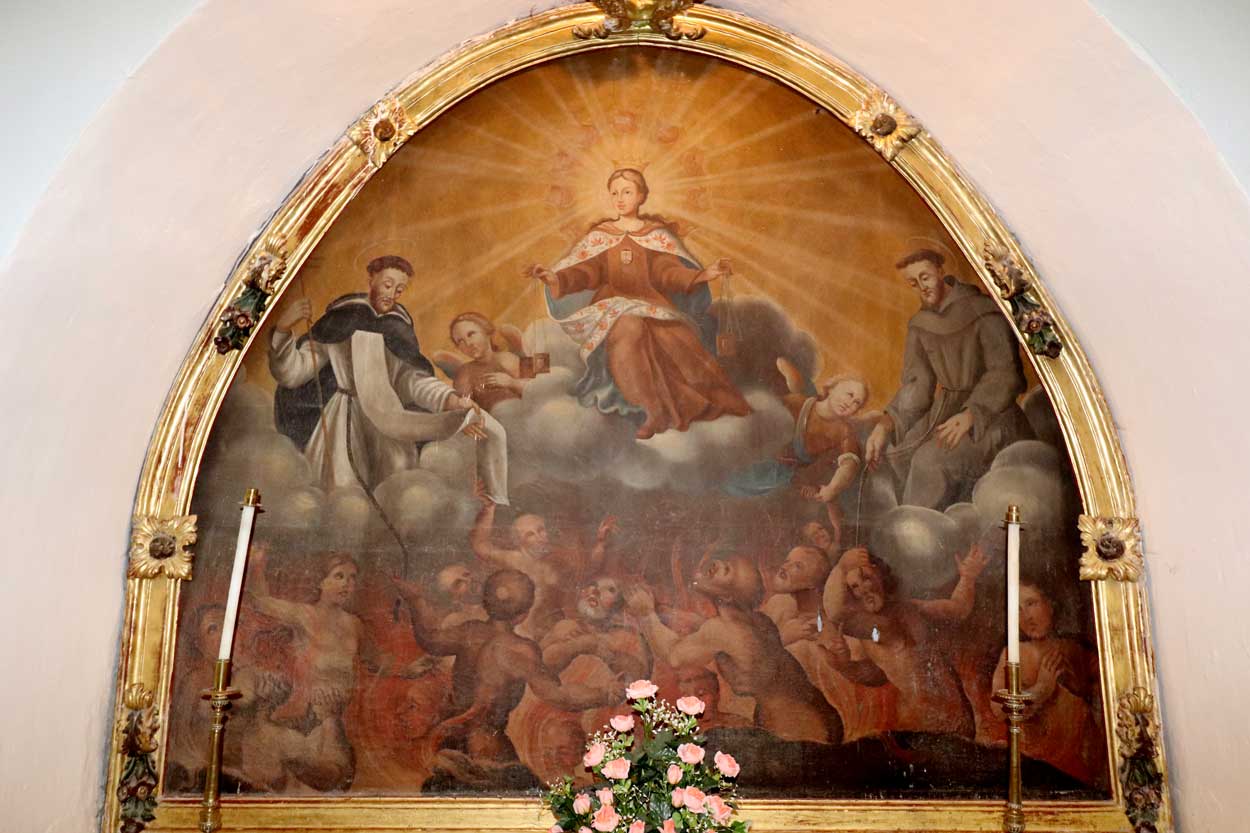 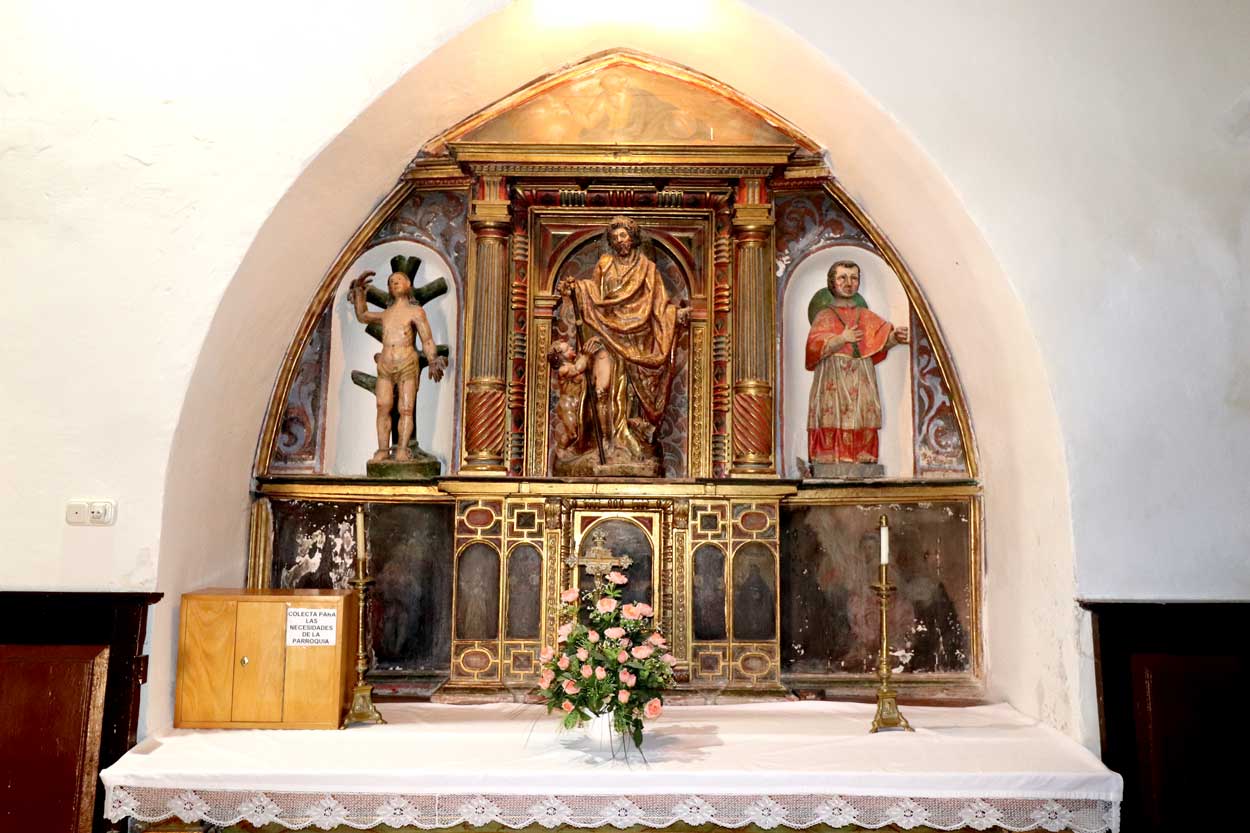 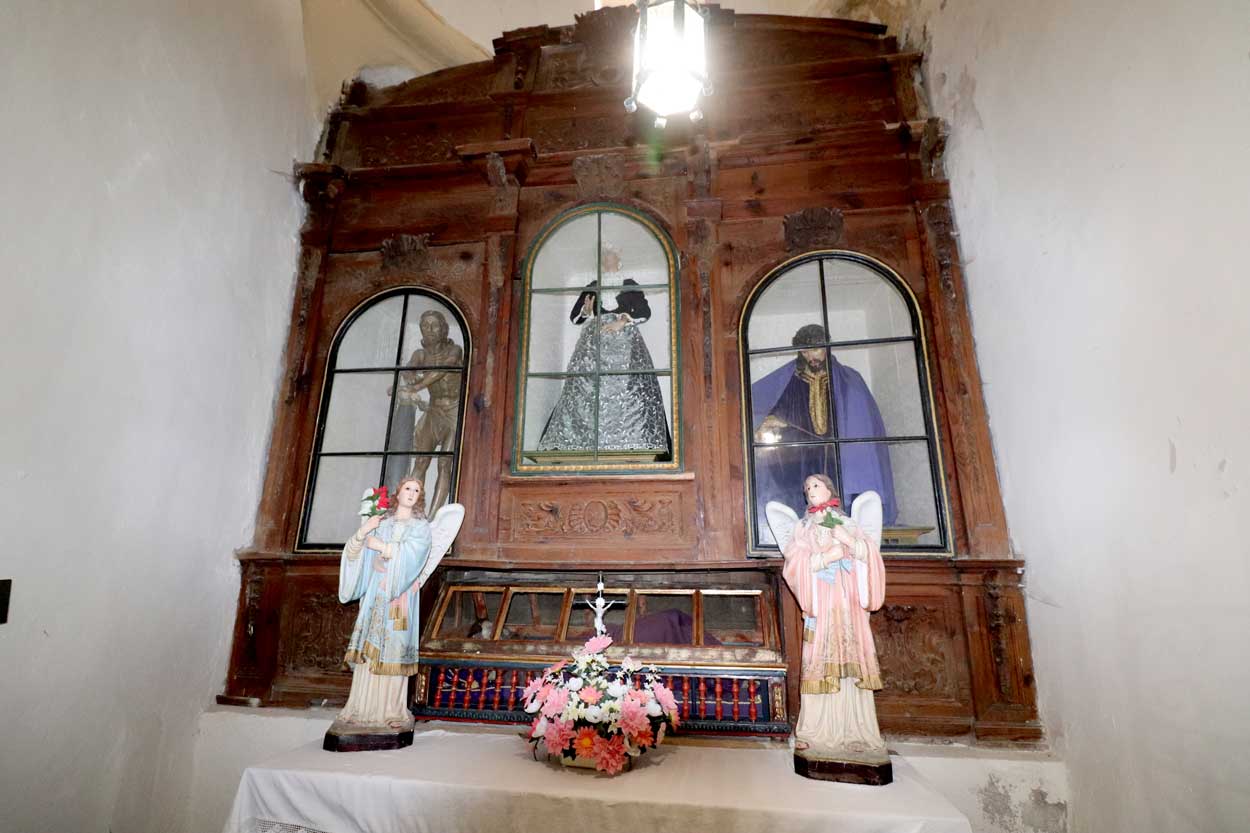 
However, the indisputable highlights of this church are the sepulchres of Juana de Acuña y Enríquez and Pedro Vélez de Guevara, Lord and Lady of the town. They are under the choir today, although they were moved several times around the temple. Initially, they were next to each other beside the main altar, but they were later placed separately on both sides of it until they recently found their current accommodation under the choir. 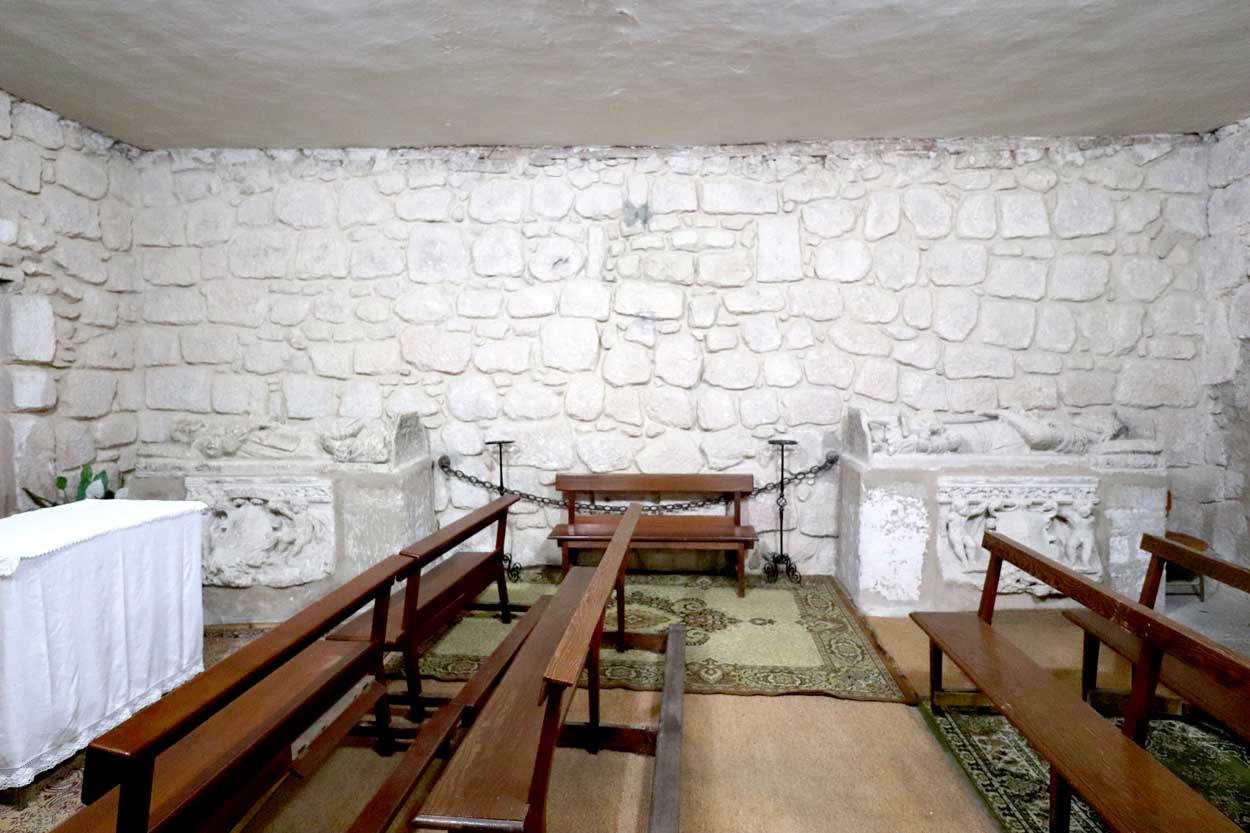 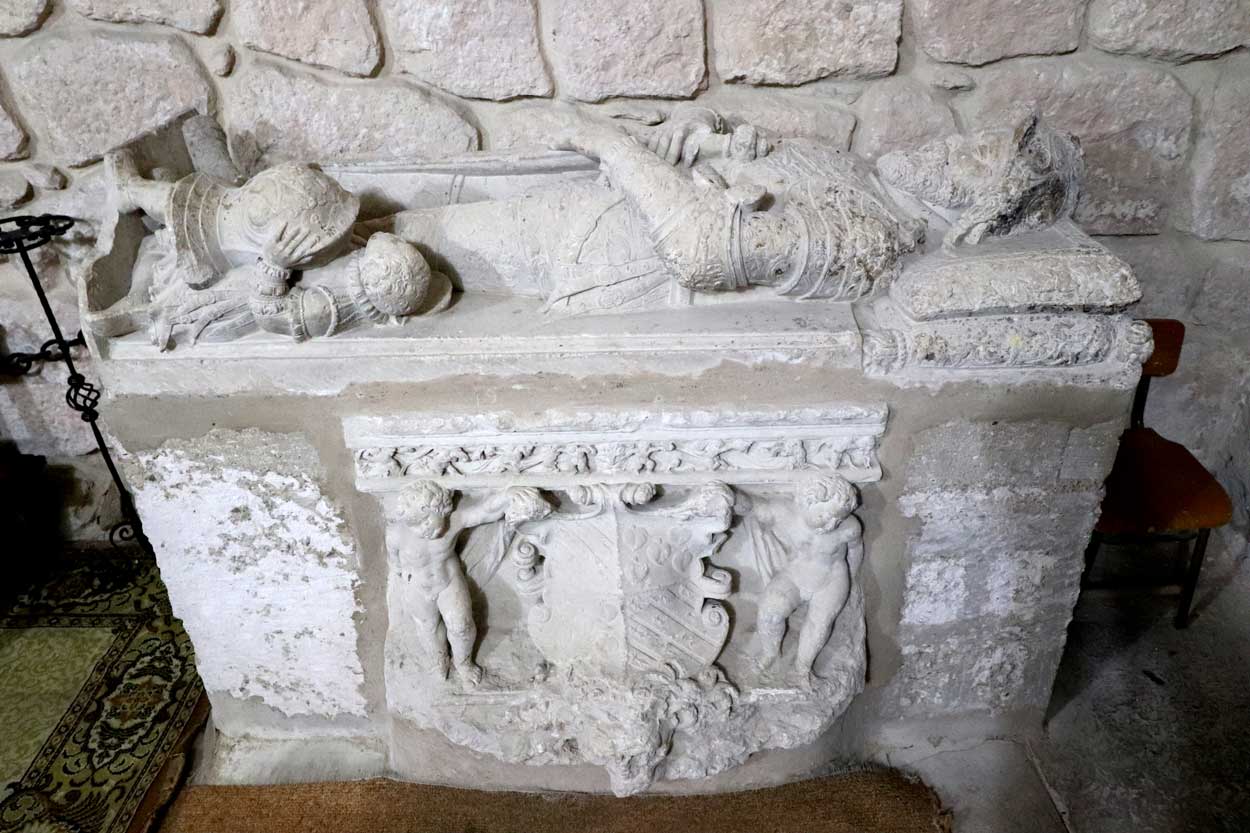 Lady Juana died in 1559, eight years after her husband. She left instructions in her will to make these magnificent sepulchres, some of the best from the Renaissance era that are preserved in Álava. Their author is unknown, but due to their great quality and the amount of sculptural details they possess, it is suspected that the main artists who worked at that time in the area, as Felipe de Bigarny or Berruguete, might have created them.
Juana de Acuña y Enríquez is dressed as a high lady of that time, with an elaborate updo, a luxurious dress and jewels over her chest. She carries a book and a rosary in her hands, and she is accompanied by a miniature lady and a lapdog at her feet. A coat of arms of her lineage held by angels can be seen on the side. 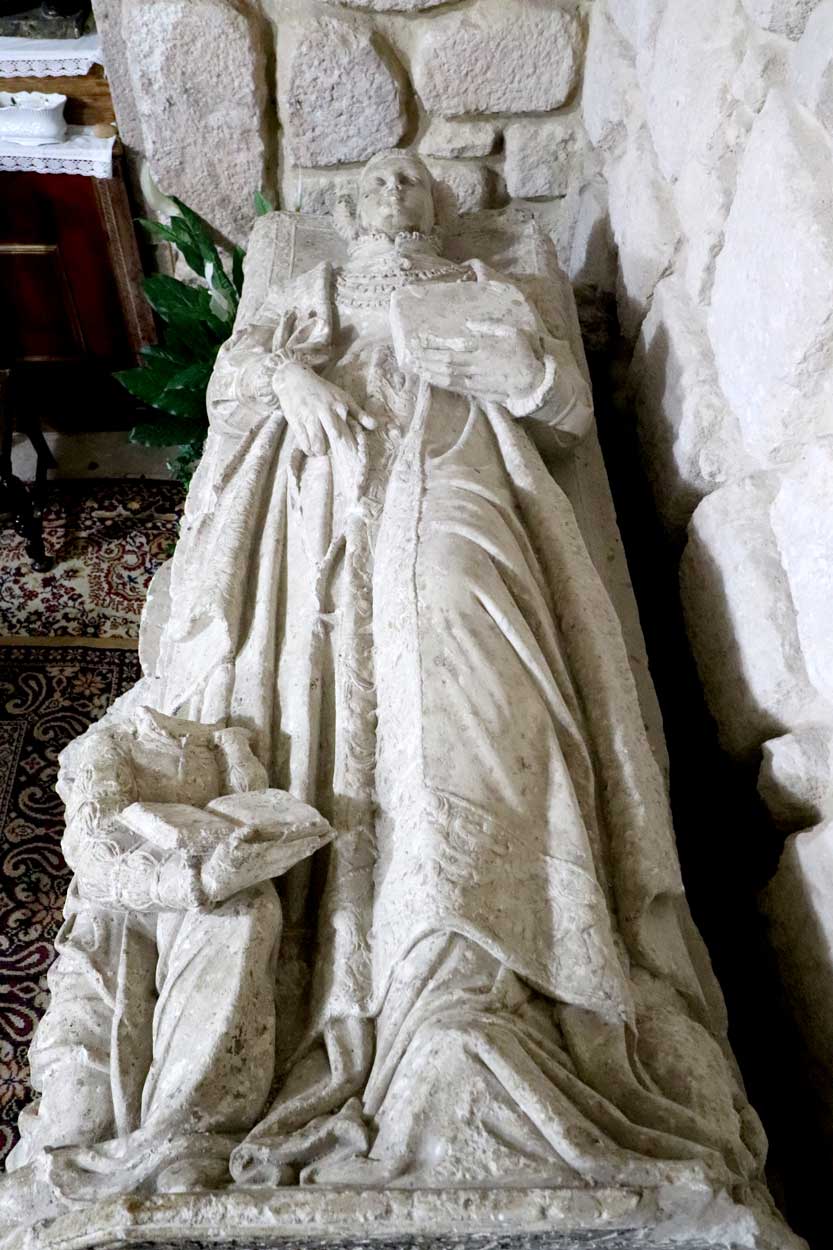 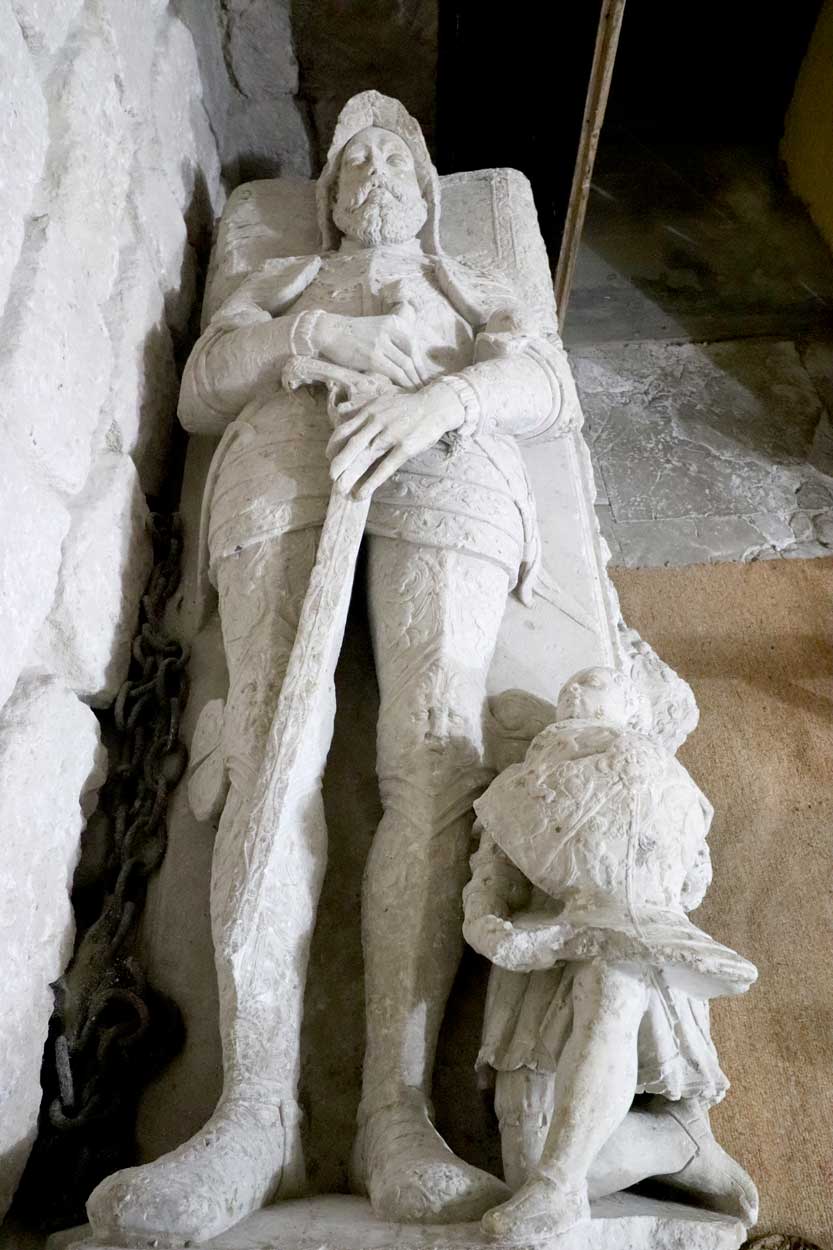 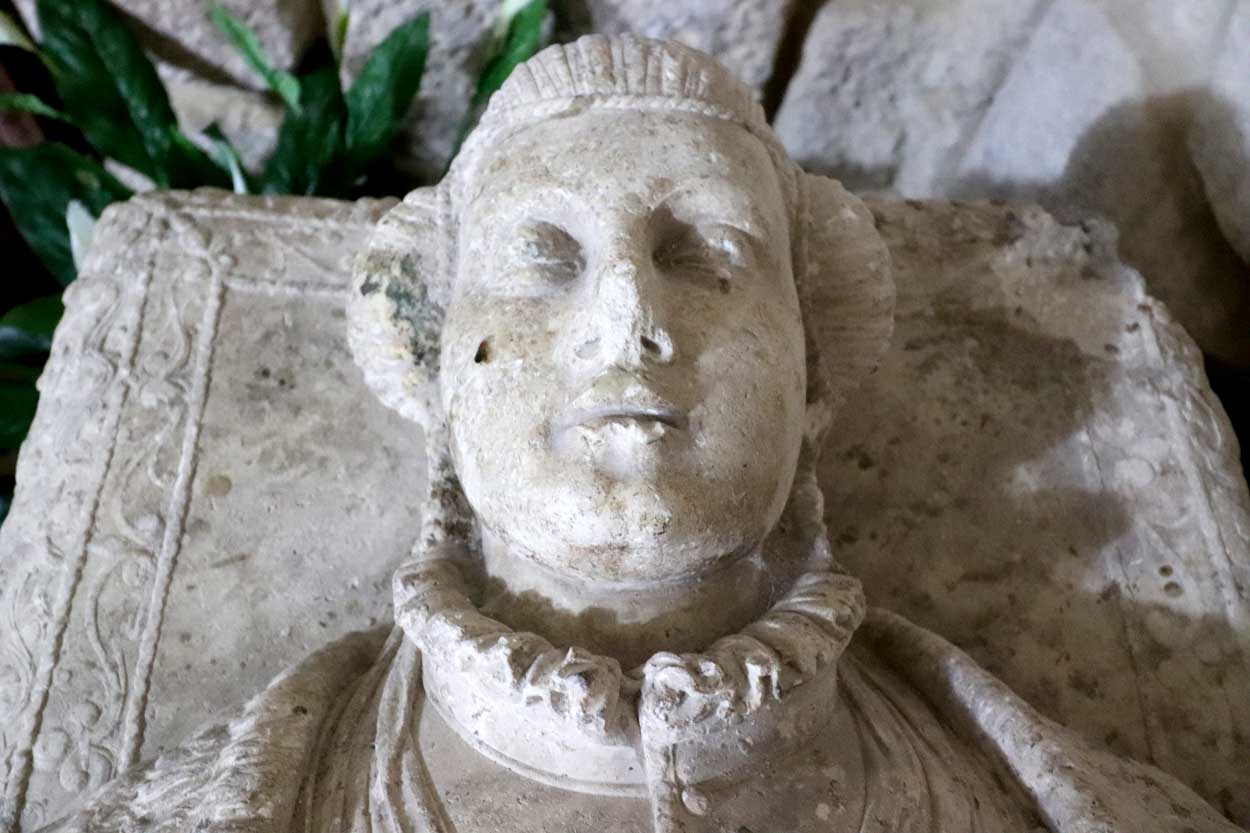 Pedro Vélez de Guevara is dressed as a knight, with a suit of armour and a sword in his hands. Over his chest we can see the cross of Saint James, order to which he belonged during his lifetime. His suit of armour is a wonder of decorative elements typical of the Renaissance, where we can distinguish lions and faces in the joints, straps and all kind of details a candelieri. A young squire holds a helmet at his feet. As in the case of Juana de Acuña, a coat of arms held by angels identifies the family which he belonged to. 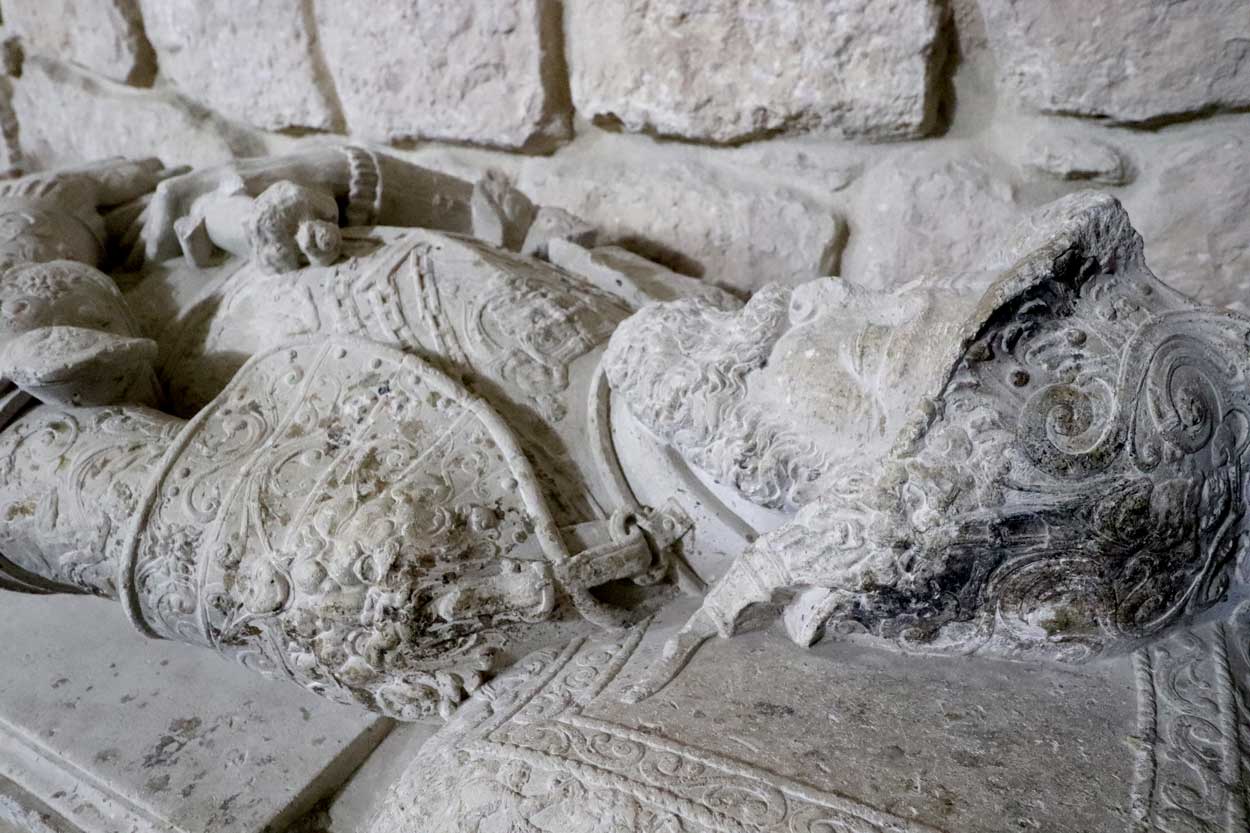 
They were not the only lords of the town that left their mark for posterity on Salinillas de Buradón. Very close to the church of Our Lady of the Conception, an old hospital from the 14th century is still preserved, which was founded by the couple formed by María Sarmiento and Fernán Pérez de Ayala. It was one of the best-equipped hospitals of its time and looked after the poor, sick people and pilgrims of the Way of Saint James. On the front of the building, the original facade and a very transformed Gothic window survive. 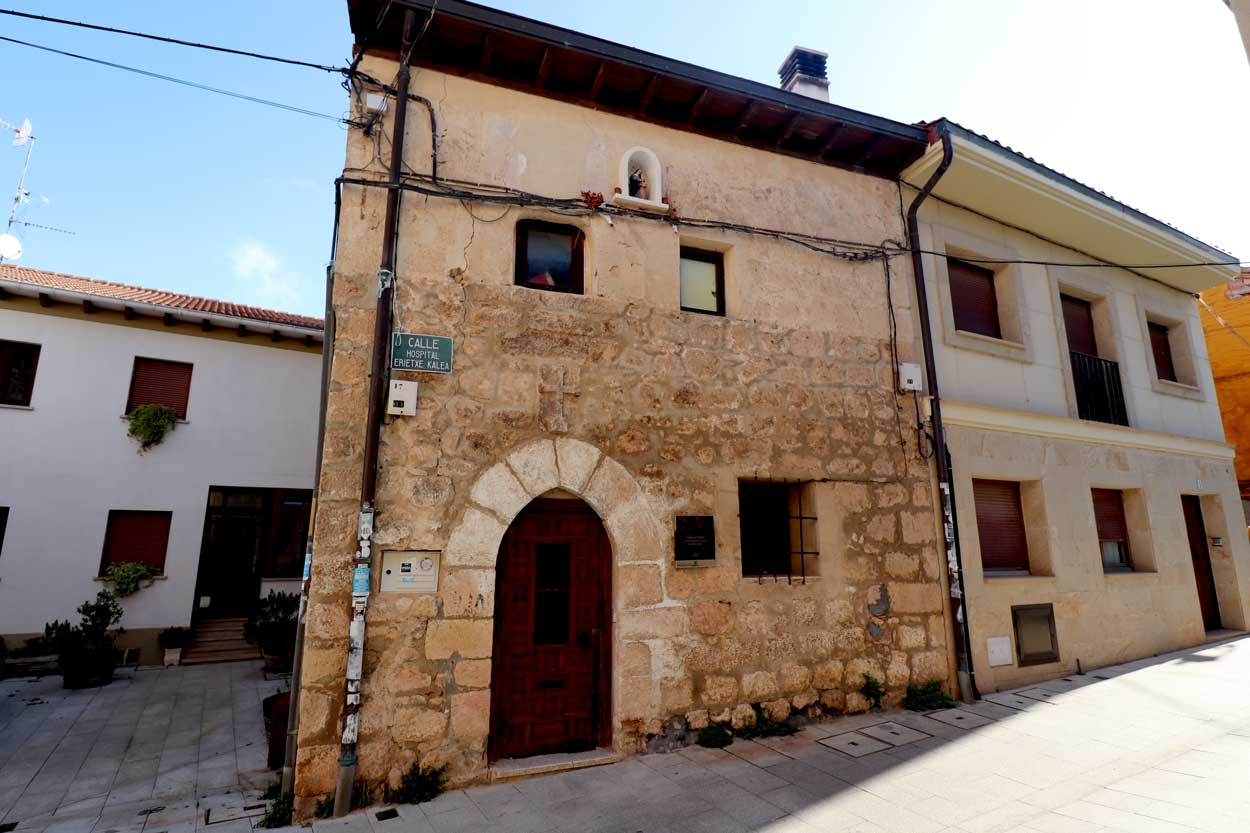