Ordoñana -The church of Our Lady of the Assumption
EUSKERA
CASTELLANO

Ordoñana is strategically located on the Alavese Plains, halfway between Zalduondo and Agurain/Salvatierra. Therefore, its history has run parallel to the commercial and pilgrimage routes that have crossed the province. It is mentioned in the document Reja de San Millán (11th century), so we are facing a town of great antiquity. In 1332, it became part of the town of Salvatierra, as a result of the Voluntaria Entrega encouraged by the King Alfonso XI, a town with which it maintained historical tensions. Ordoñana was also head of the Brotherhood of San Millán or Eguílaz, origin of the current town of San Millán/Donemiliaga, whose see is in the town under discussion. From this historical importance derives the existence of the lineage of the House of Herdoñana, a family related to the Guevara and the Ocáriz families, and that prospered in a considerable way, which has left a deep mark on its heritage.

The chapel of the Ordoñanas

In 1615, Don Pedro Ruiz de Ordoñana founded a large chapel dedicated to Saint Anthony, which opens out over the north wall of the church. Under the access arch, possibly relocated, we see the praying sculpture of the founder, who is shown kneeling on large pillows decorated in the Renaissance taste. He is dressed with a doublet, fitted tightly by a belt, a short cape and a ruff, which show the high social status of this personality. On the pediment that gives access to the chapel, the great coat of arms of the “Hordonana” is framed, showing the power of this family and its involvement with the church, to which they gave considerable amounts of money. As an inscription on the chapel reminds us, Don Pedro was born in Ordoñana, but he later became “Mexican resident”, where he amassed a great fortune. The room is completed with the Romanist altarpiece dedicated to Saint Anthony, a beautiful work that was financed by Juan Ruiz de Ordoñana and that is located in the sphere of the sculptor from Salvatierra Lope de Larrea. 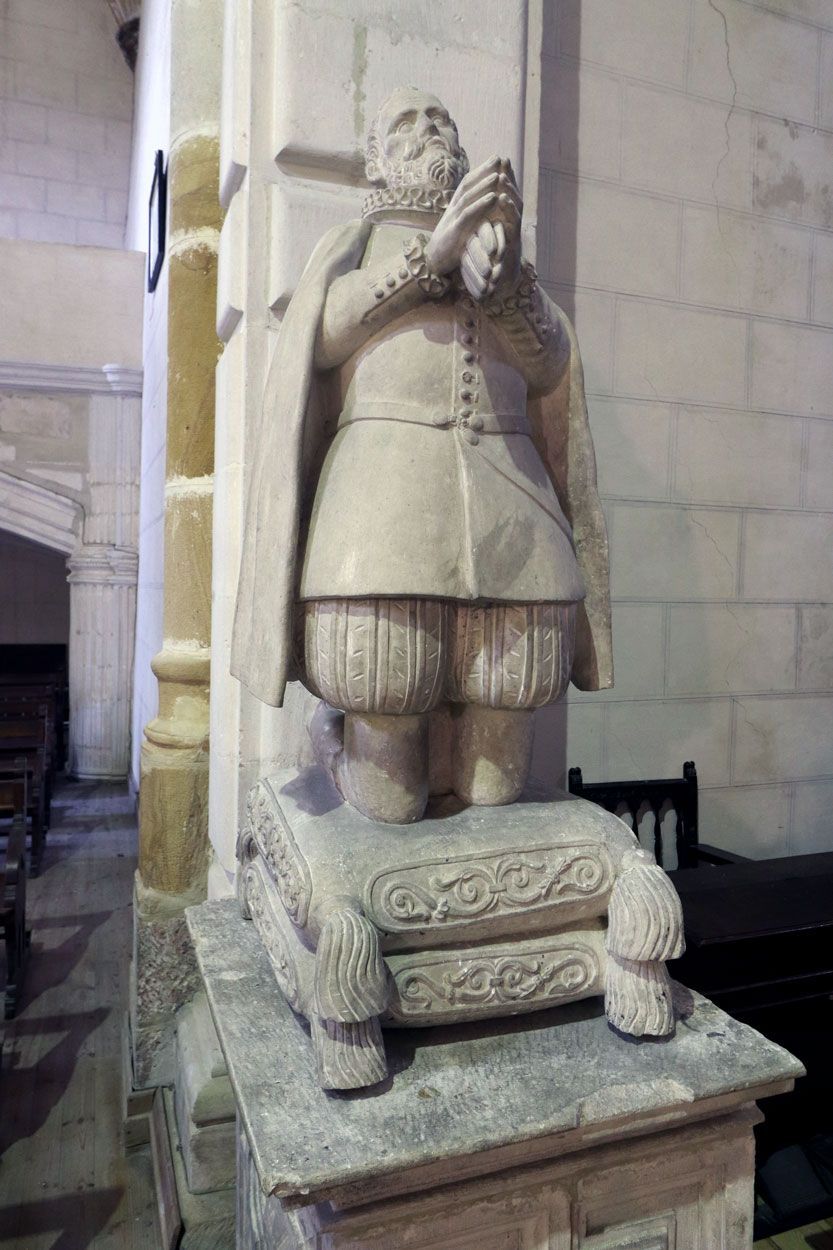 In the case of Ordoñana, we do not have old photographs that provide us with relevant information. The ones that were preserved show us a church that has not undergone major transformations recently. In one of the overviews we can see a stone structure located in the south wall, over the facade, which was used to hide the weights of the clock and that has now disappeared. Except for these details, the photographs show that the church has not substantially changed its appearance during the last decades. 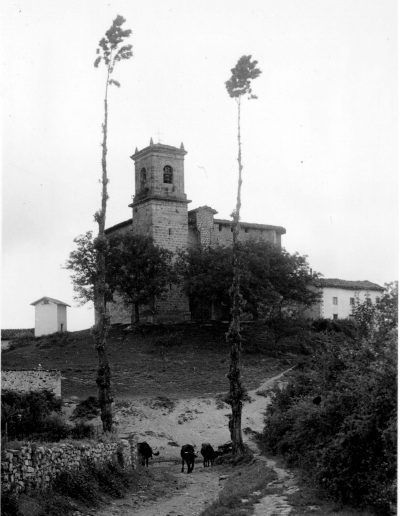 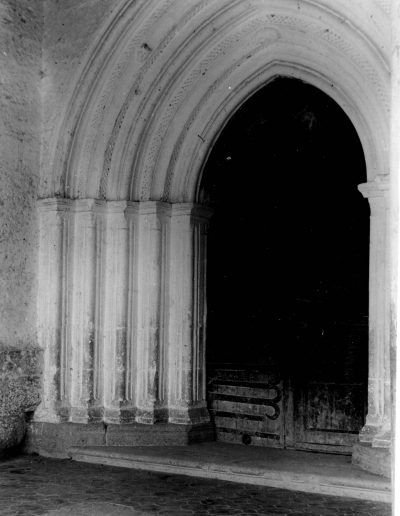 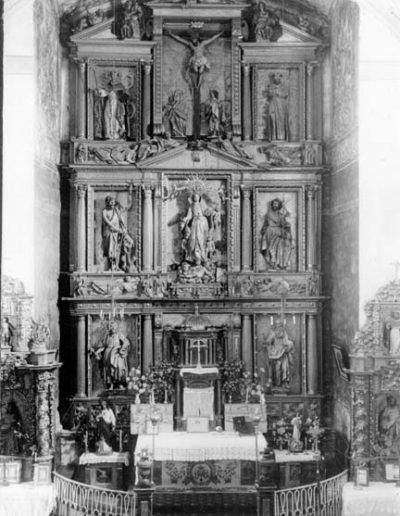 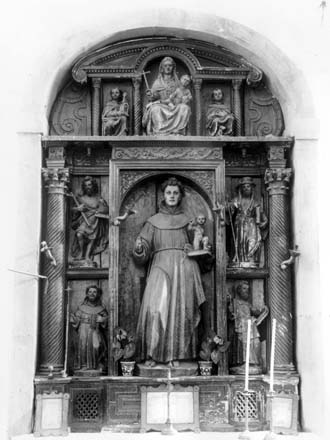 A careful inspection of the walls of the church of Ordoñana provides us with important hints about its origin. The building we are contemplating is a good work of the second half of the 16th century, with the straight east end that houses the altarpiece and the large buttresses that, from the outside, herald impressive vaults. Nevertheless, the loss of exterior renderings allows us to see numerous remains of the old Romanesque manufacturing: some randomly arranged, as fillers, others in a more harmonious way, such as the bead mouldings that simulate a crenel. 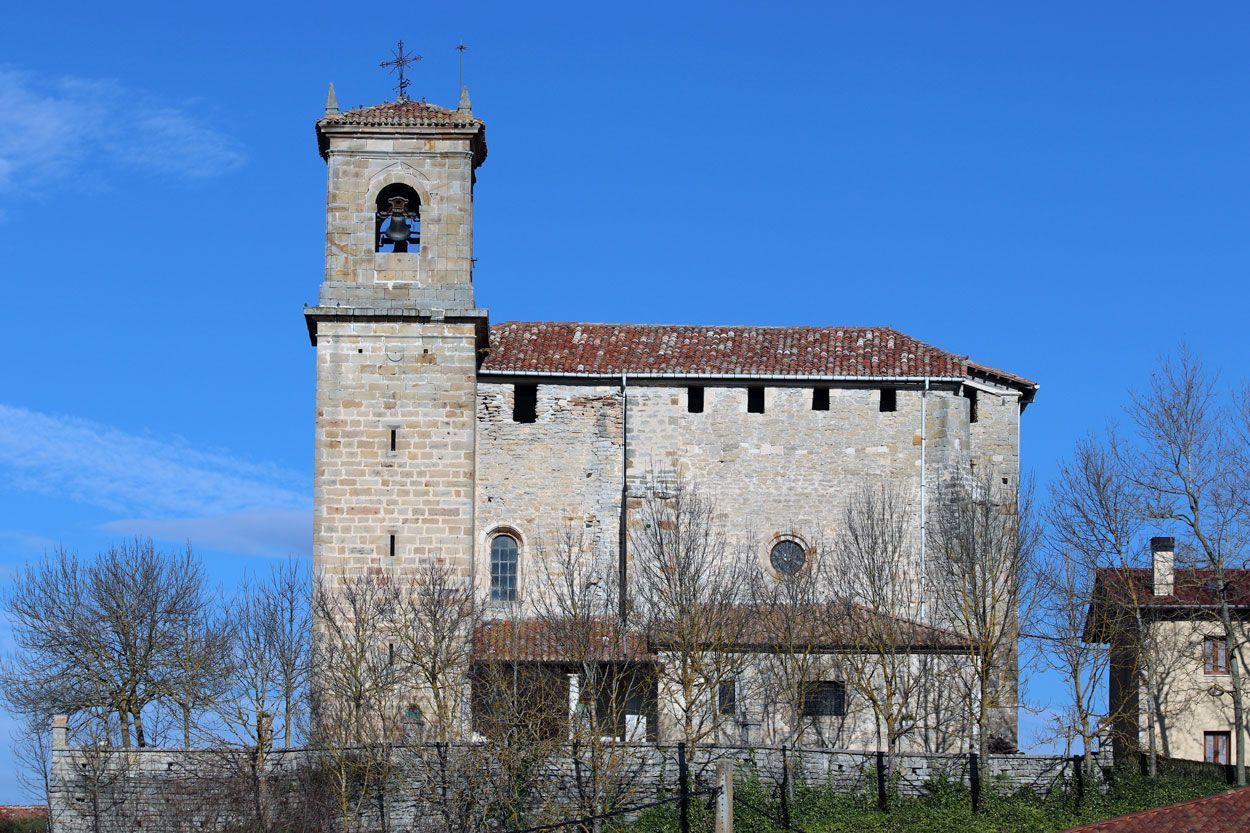 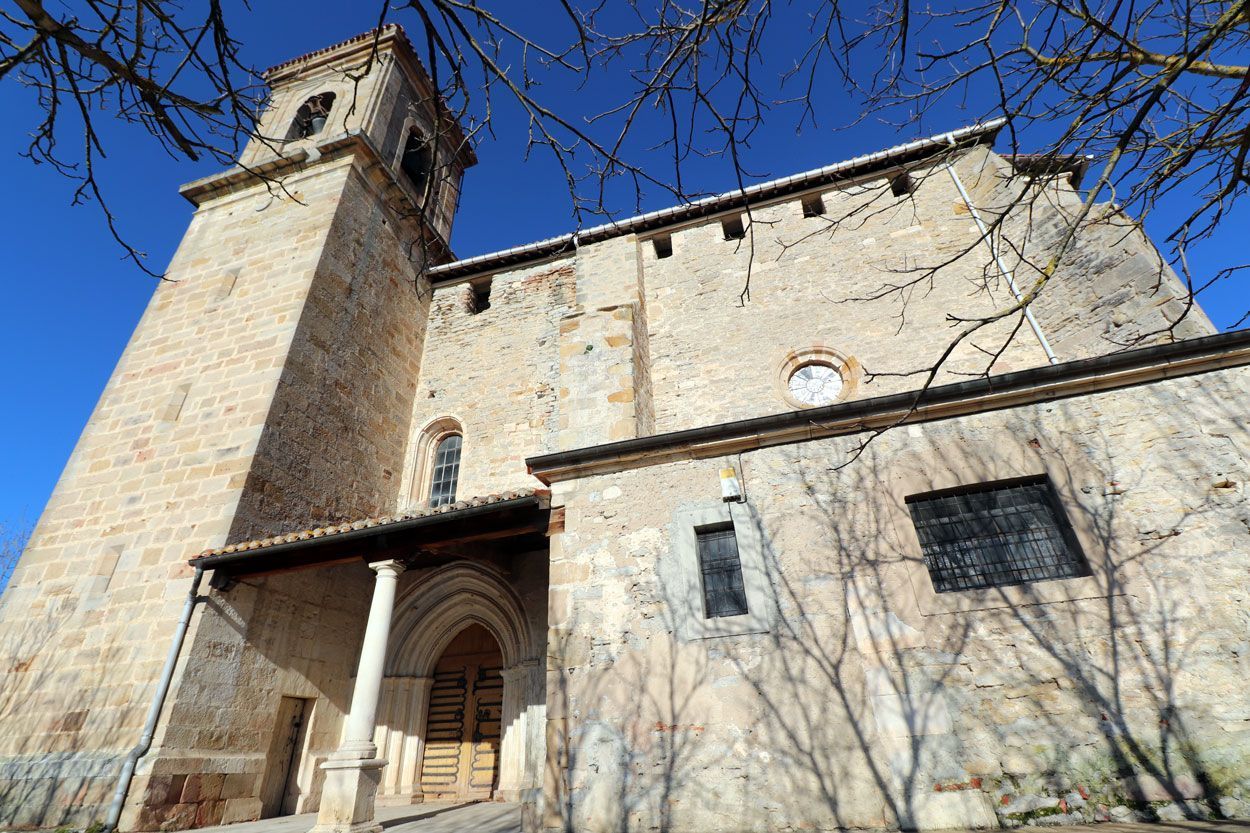 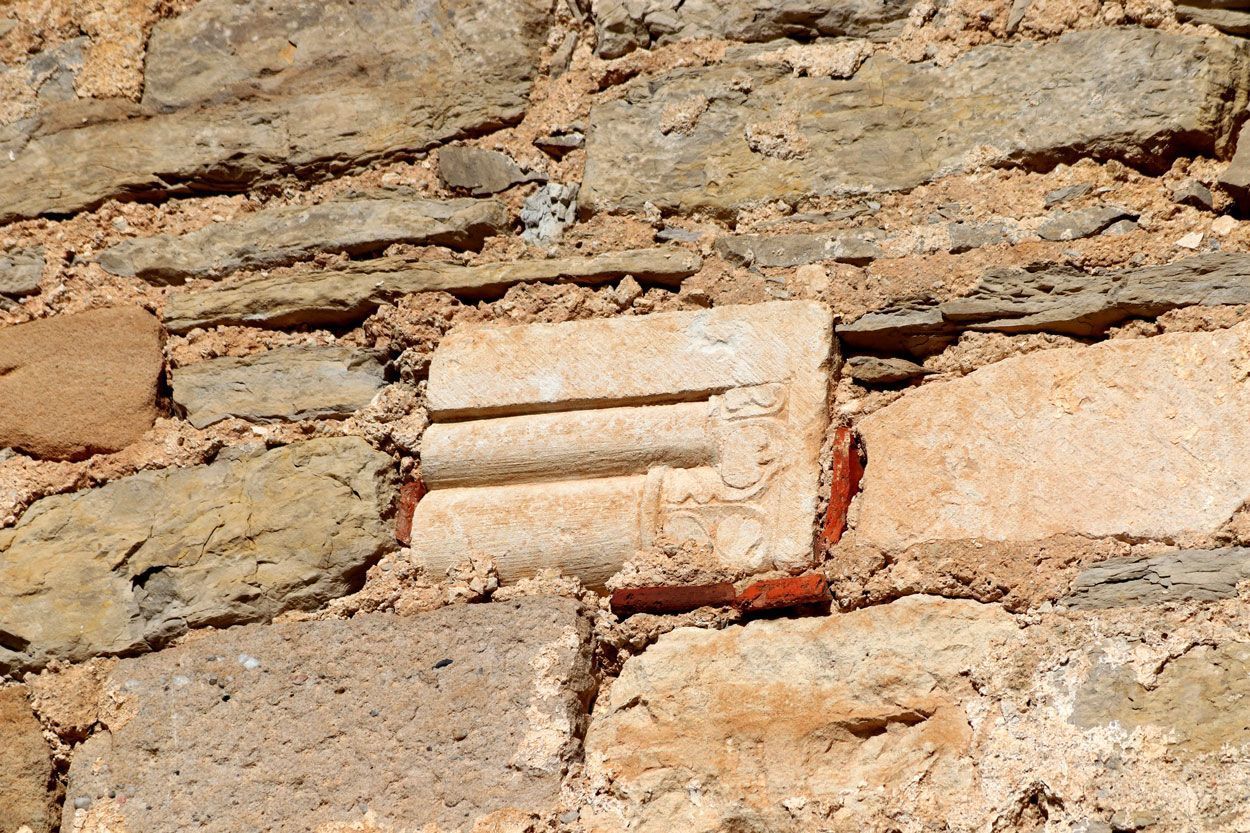 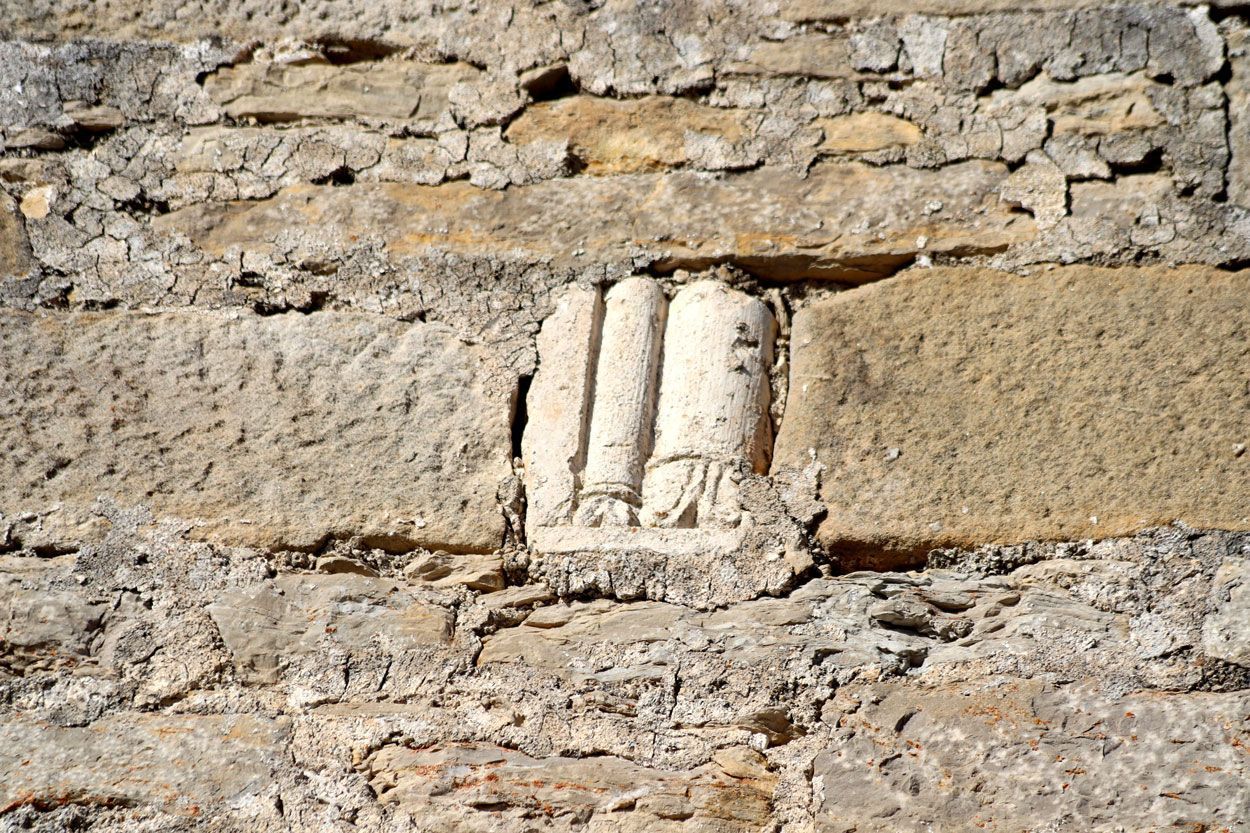 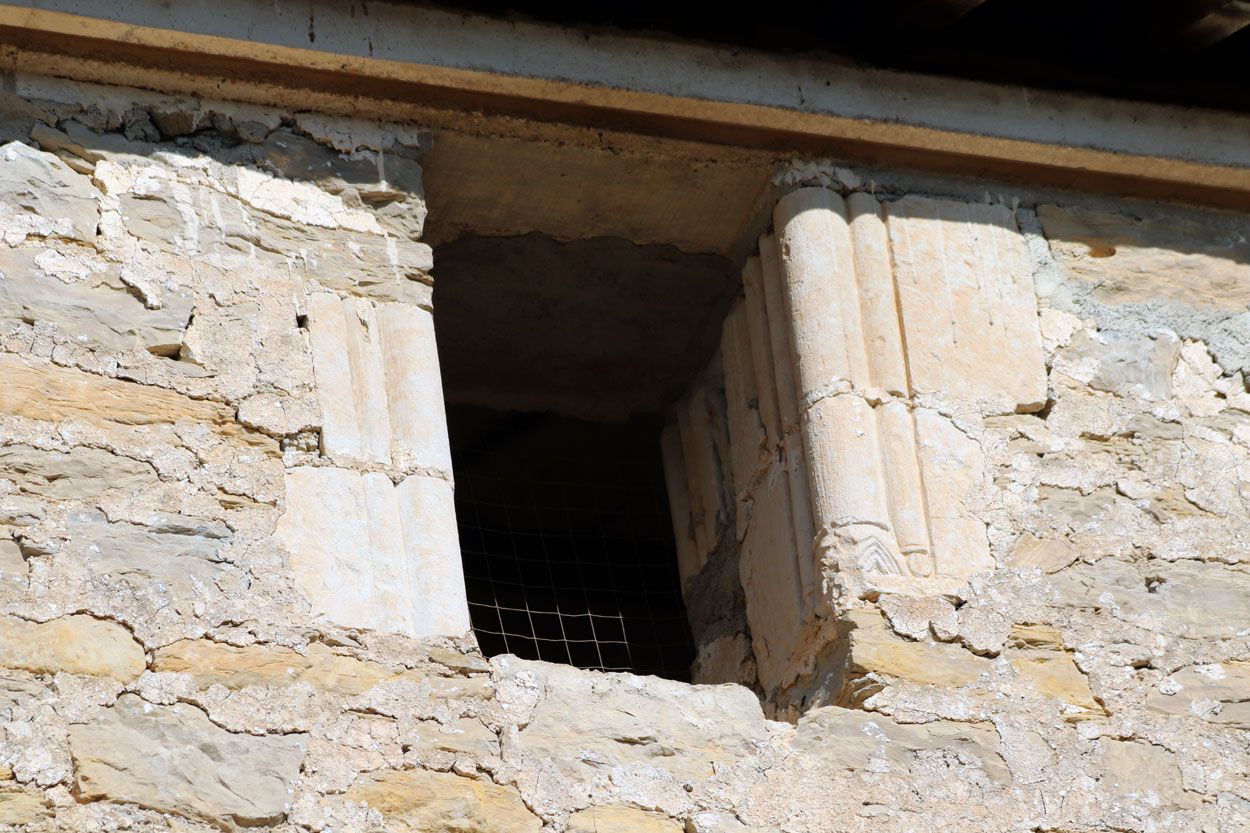 The existence of the Romanesque building is confirmed as we reach the portico, where a notable medieval facade appears, which could date from the late 12th century or the beginnings of the 13th century. It is made up of five archivolts in whose voussoirs we see enigmatic faces that are difficult to interpret, some of them blurred under numerous paint layers. Three of the archivolts are decorated with the characteristic checkered design that became so well-known during these centuries. 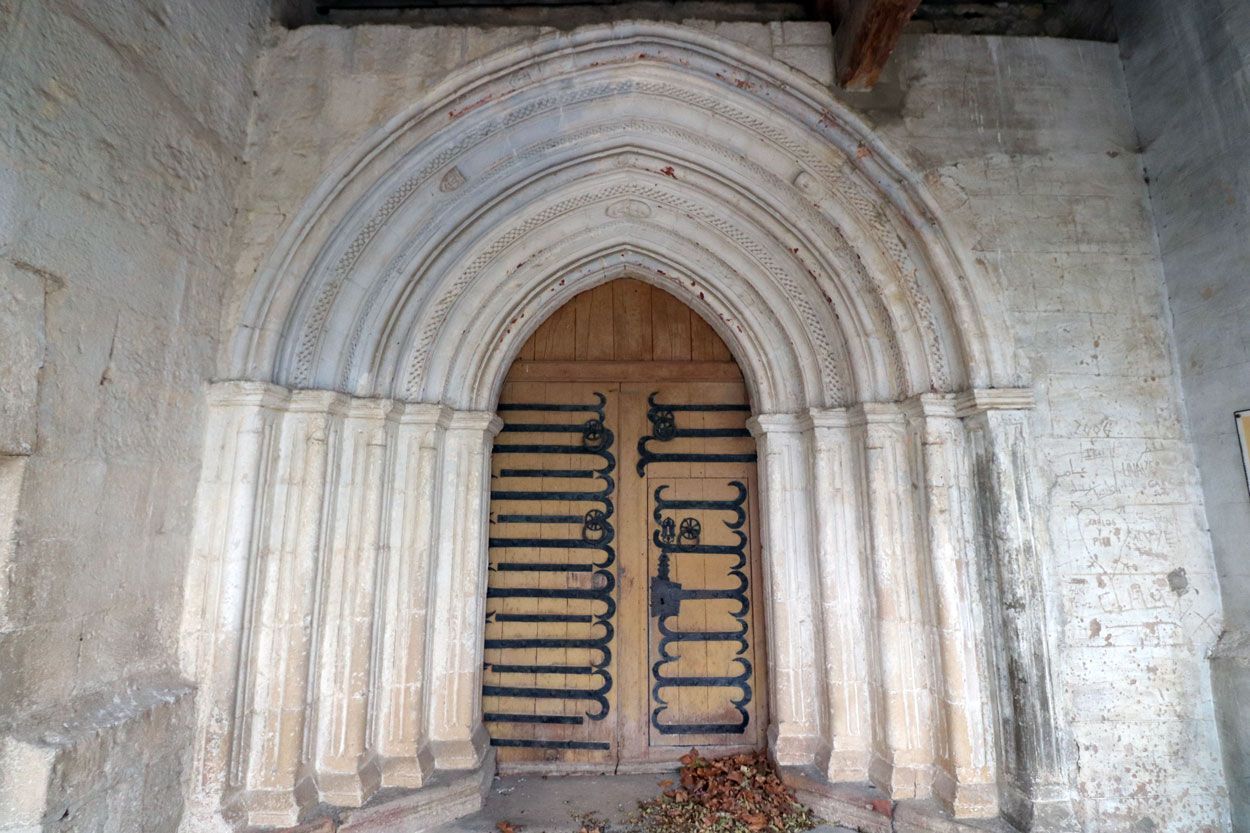 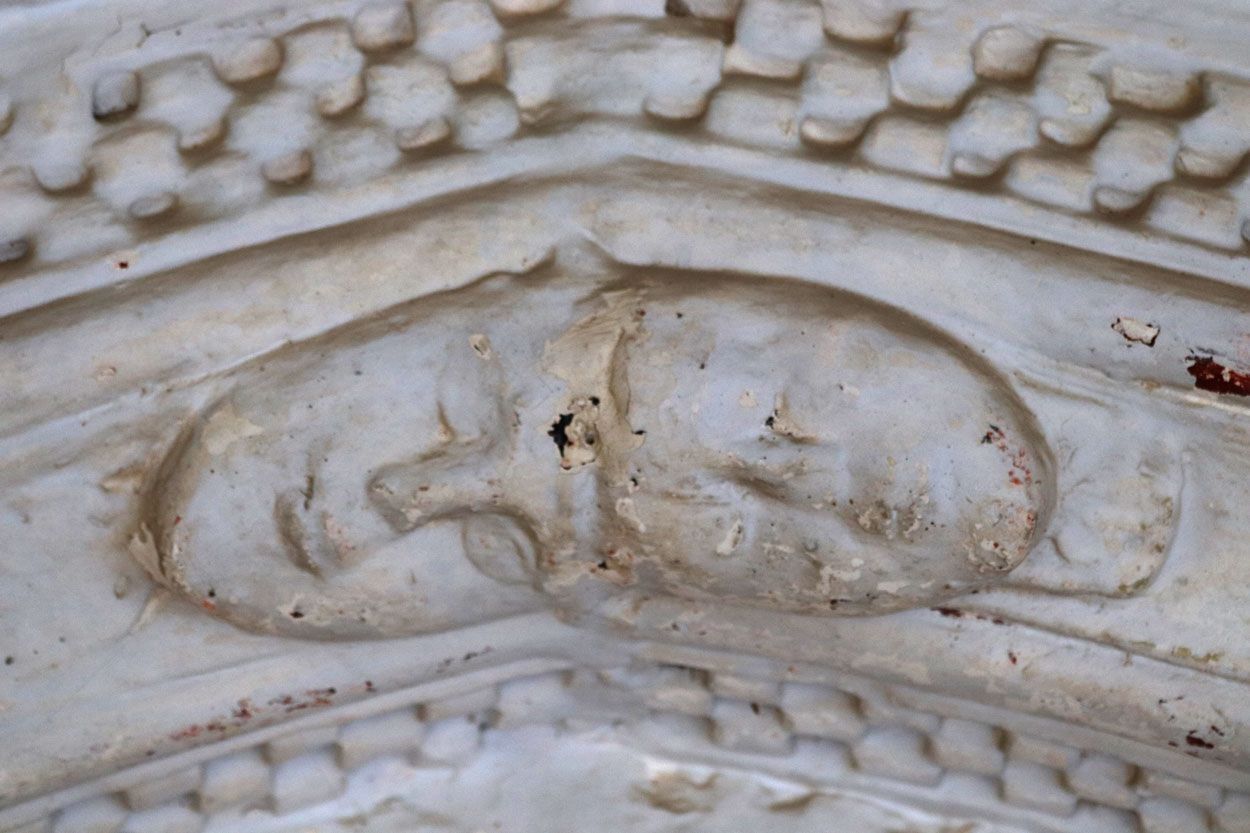 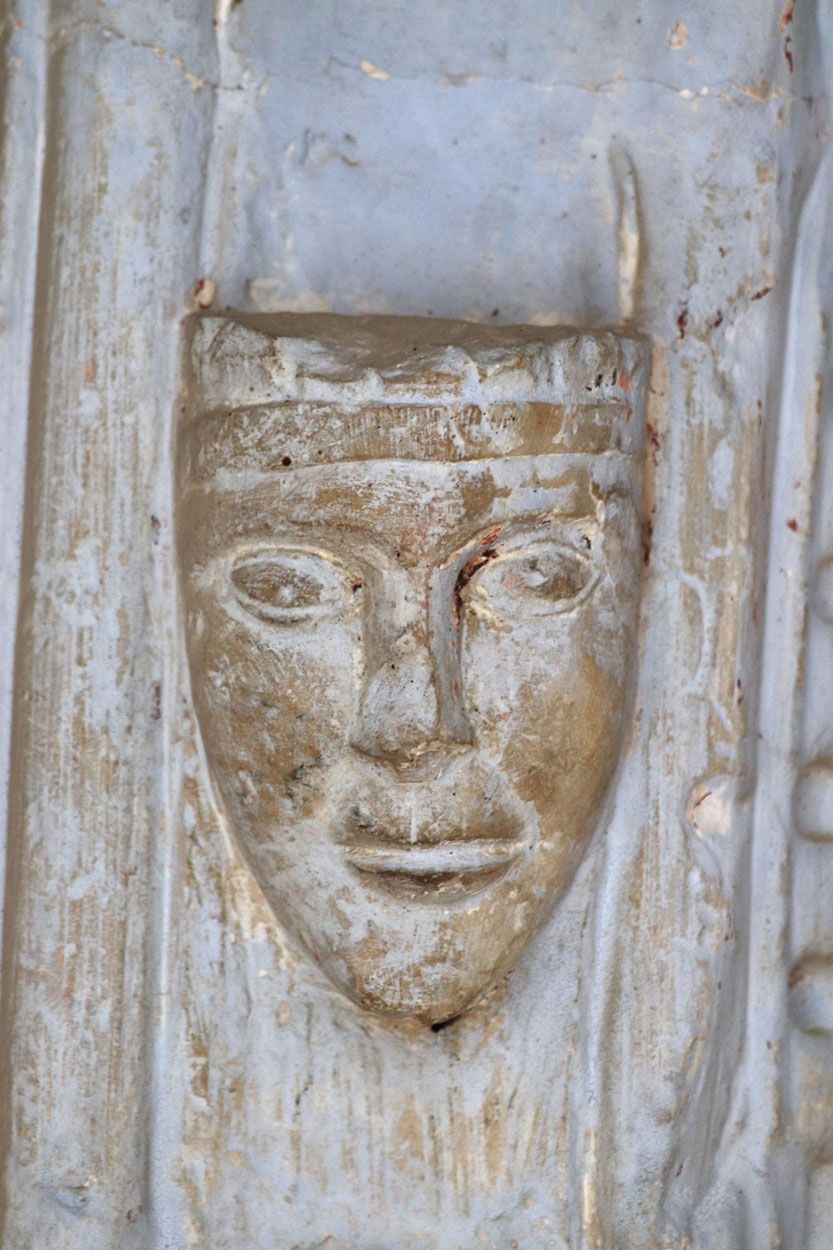 
Once inside the building, the great vaults with tiercerons amaze us, which draw two huge crosses. The ribs rest on moulded corbels, some of which contain balls, a common feature of these works of the 16th century. At least part of the vaults were made by the stonemason Ramiro de Ocáriz, who also worked in the churches of Ocáriz and Luzuriaga. 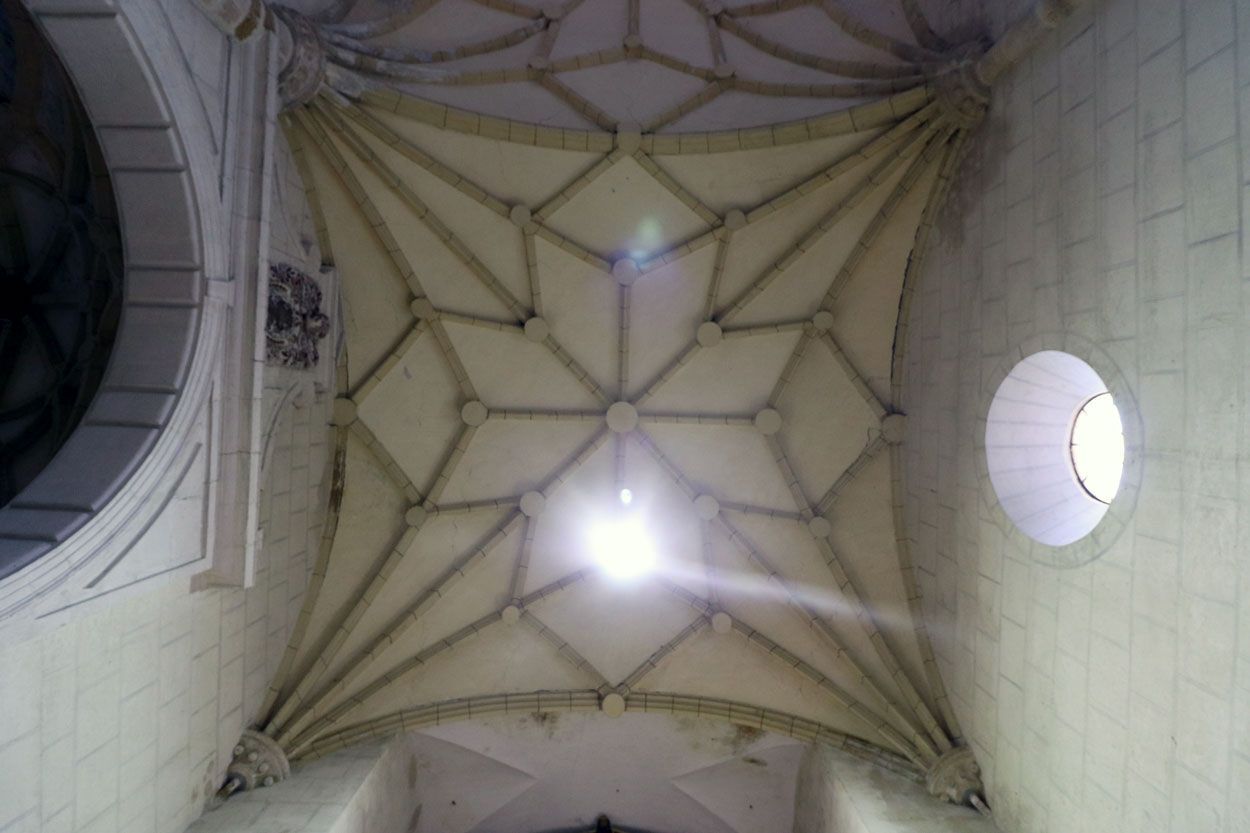 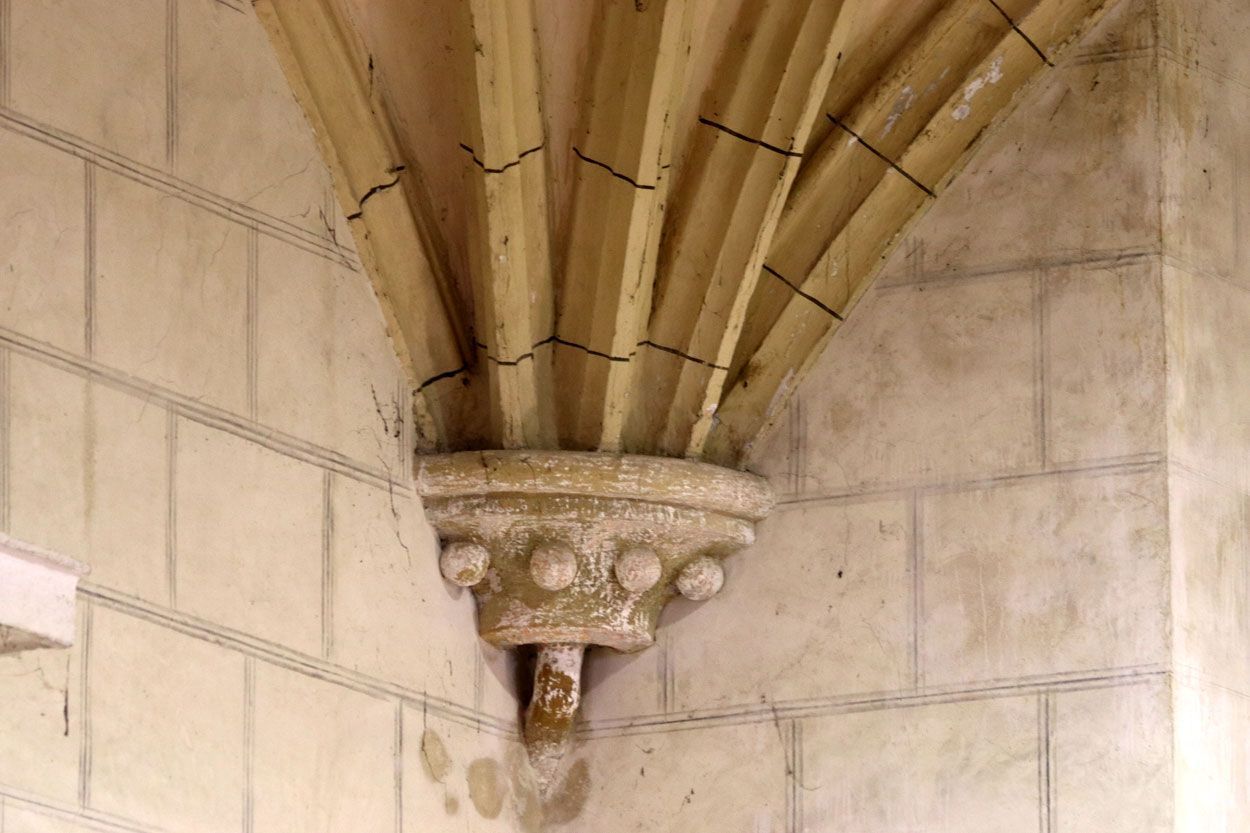 
The construction of the choir was carried out at the end of the 16th century, a usual liturgical element in the churches built during this period. It might have an important connection with the building of the chapel of the Ordoñanas, the main benefactors, although the stored data does not allow us to confirm it. The rich parapet, the fluted pilasters, and, above all, the vault that covers the area below the choir, show the interest of their patrons in achieving a high quality work. The vault is finished with a magnificent keystone in which the Virgin with the Child is represented surrounded by rays. 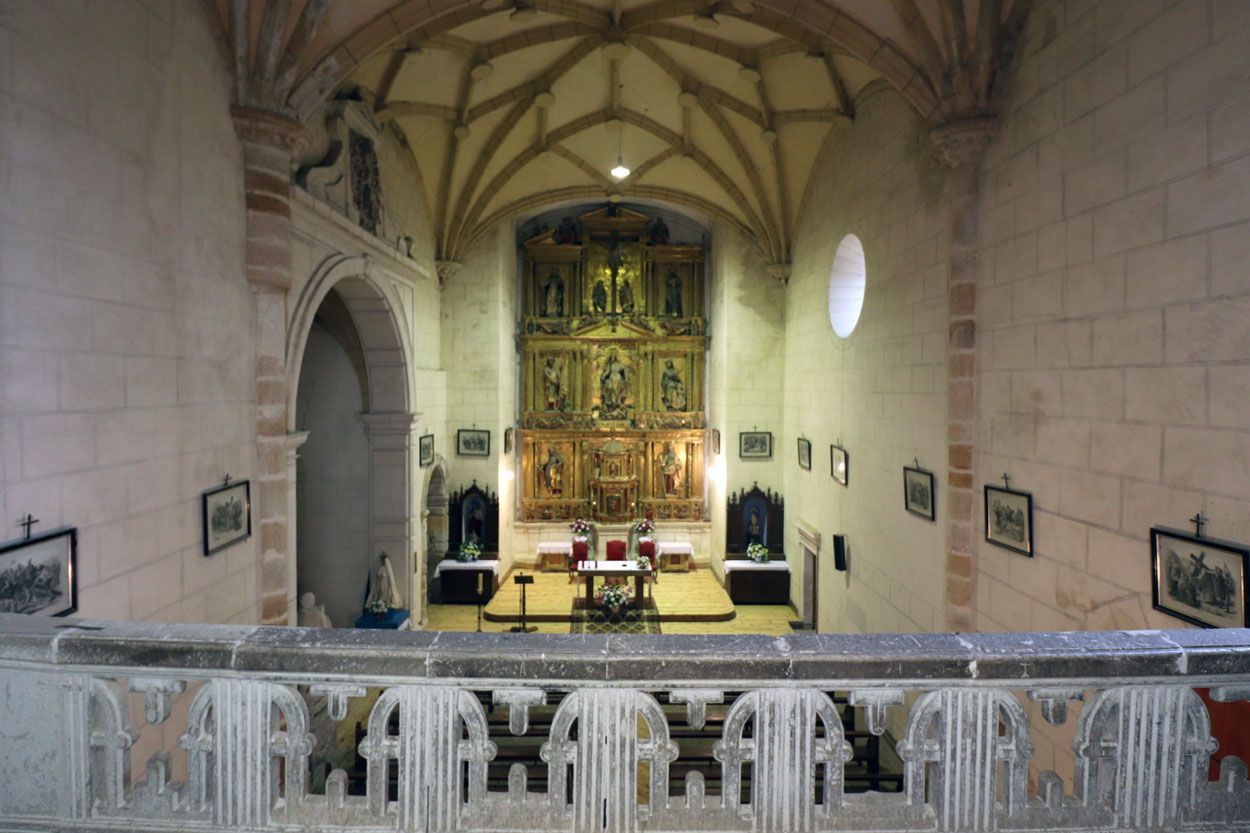 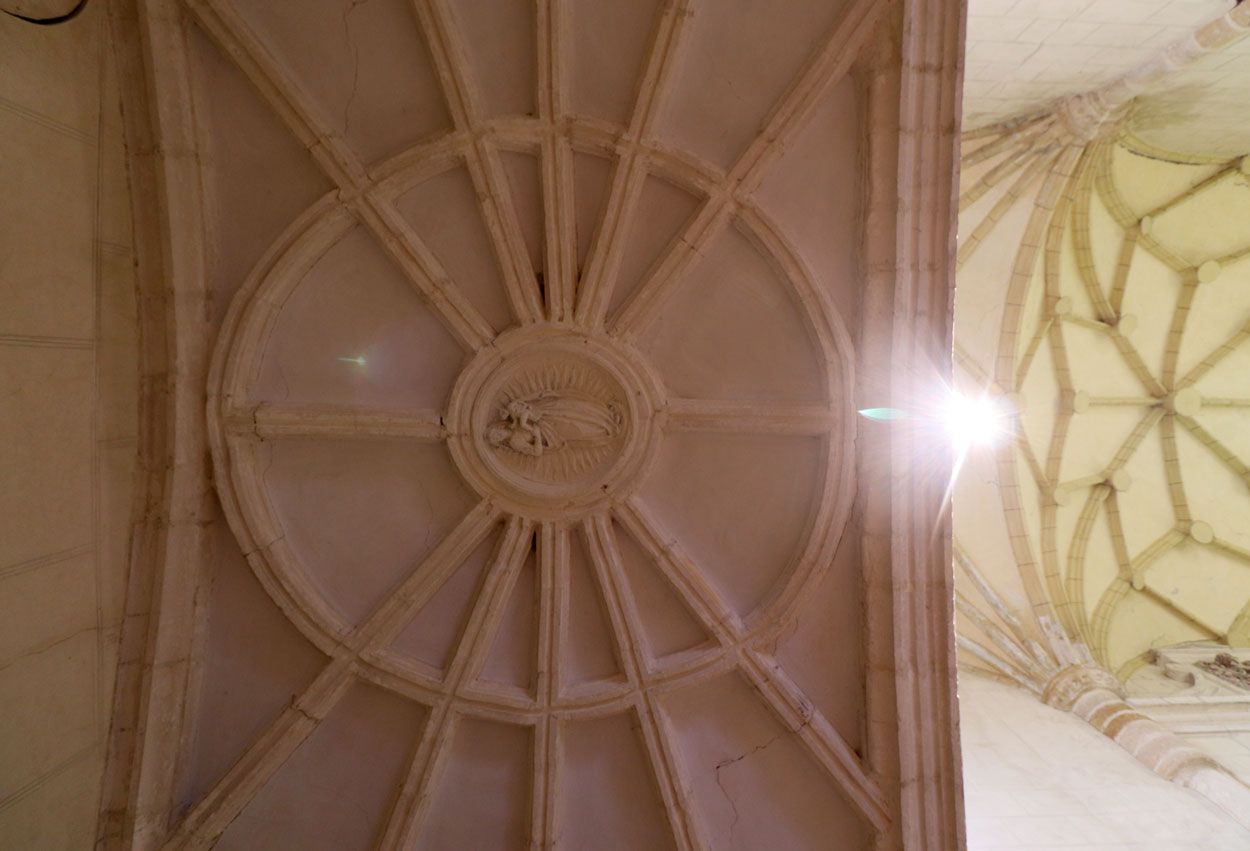 Under a simple vault of lunettes, in a specifically designed niche, stands the impressive altarpiece dedicated to the Assumption of the Virgin. It is a work of the first half of the 17th century that, from what is deduced from the ledgers, replaces an earlier altarpiece that might have been made by Juan Ruiz de Luzuriaga and Pedro de Ercilla, son of the renowned sculptor Lope de Larrea. The work of the current furniture started in 1639, led by the architect Miguel de Zozaya and the sculptors Diego de Mayora and Juan Pérez de Mezquia. 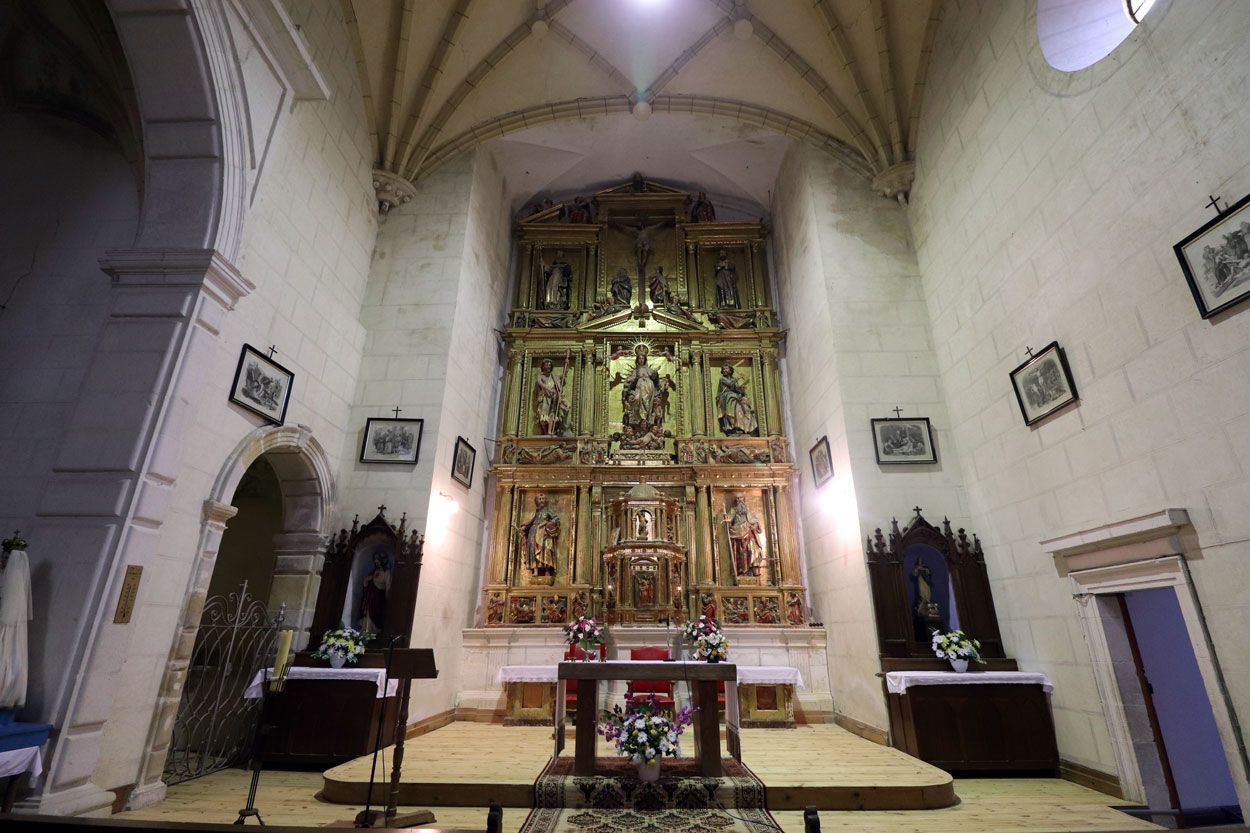 The Evangelists are represented on the predella, accompanied by the Fathers of the Church, all of them with their characteristic attributes. In the centre, there is a double tabernacle with the image of the Resurrected Christ on the front, flanked by Moses and Elijah. 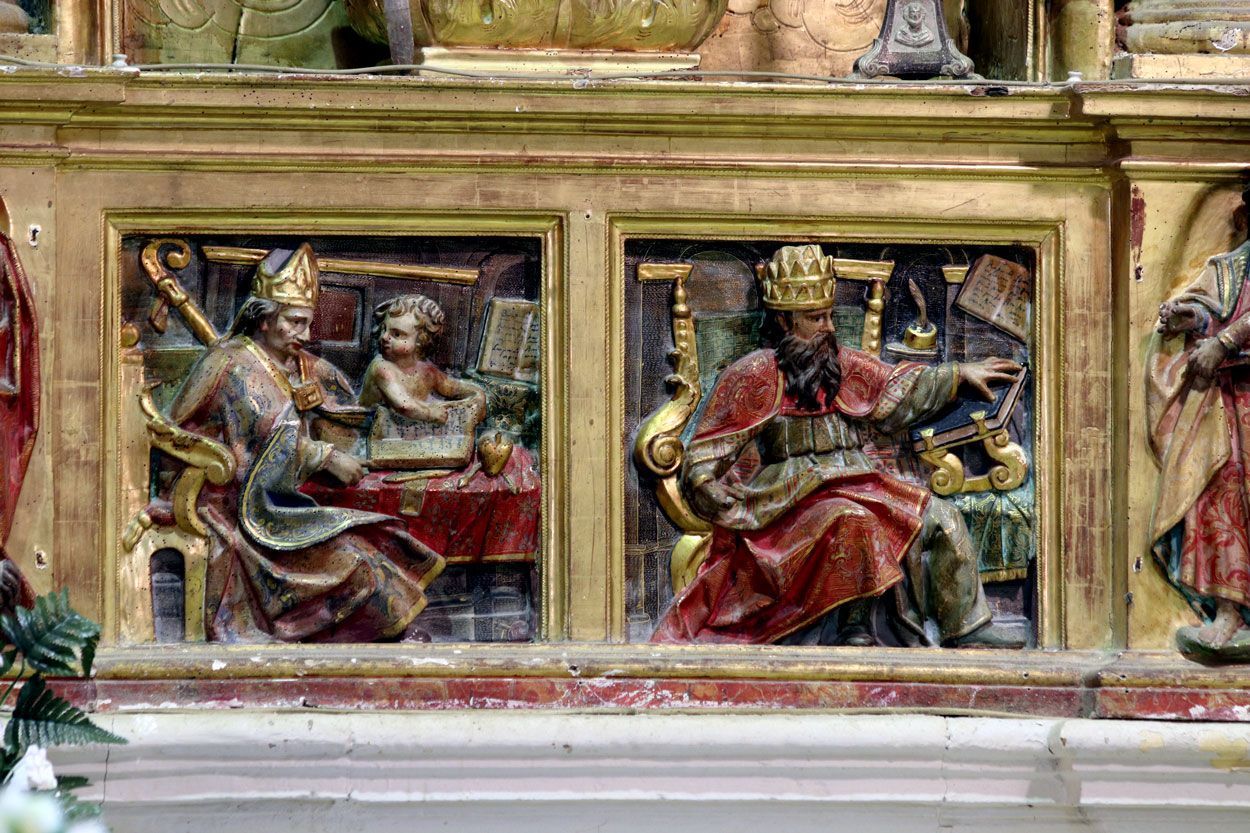 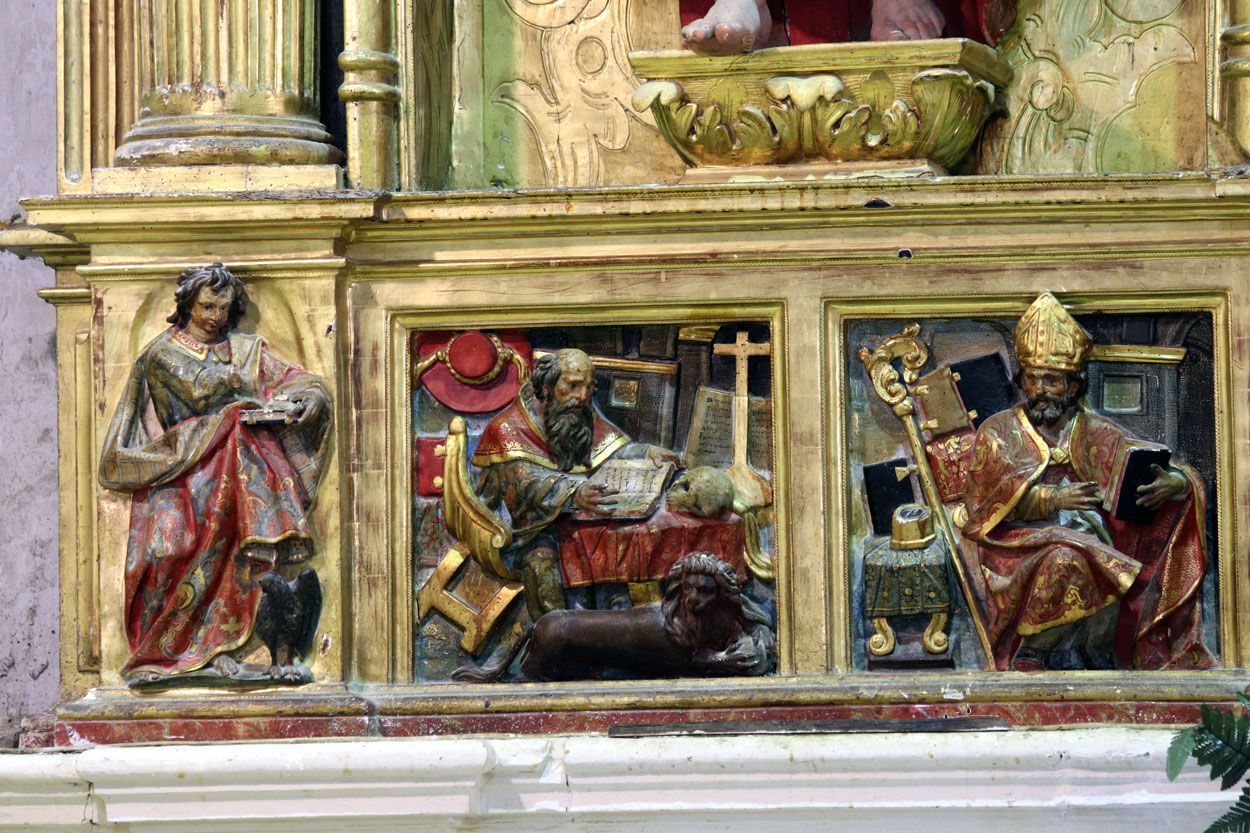 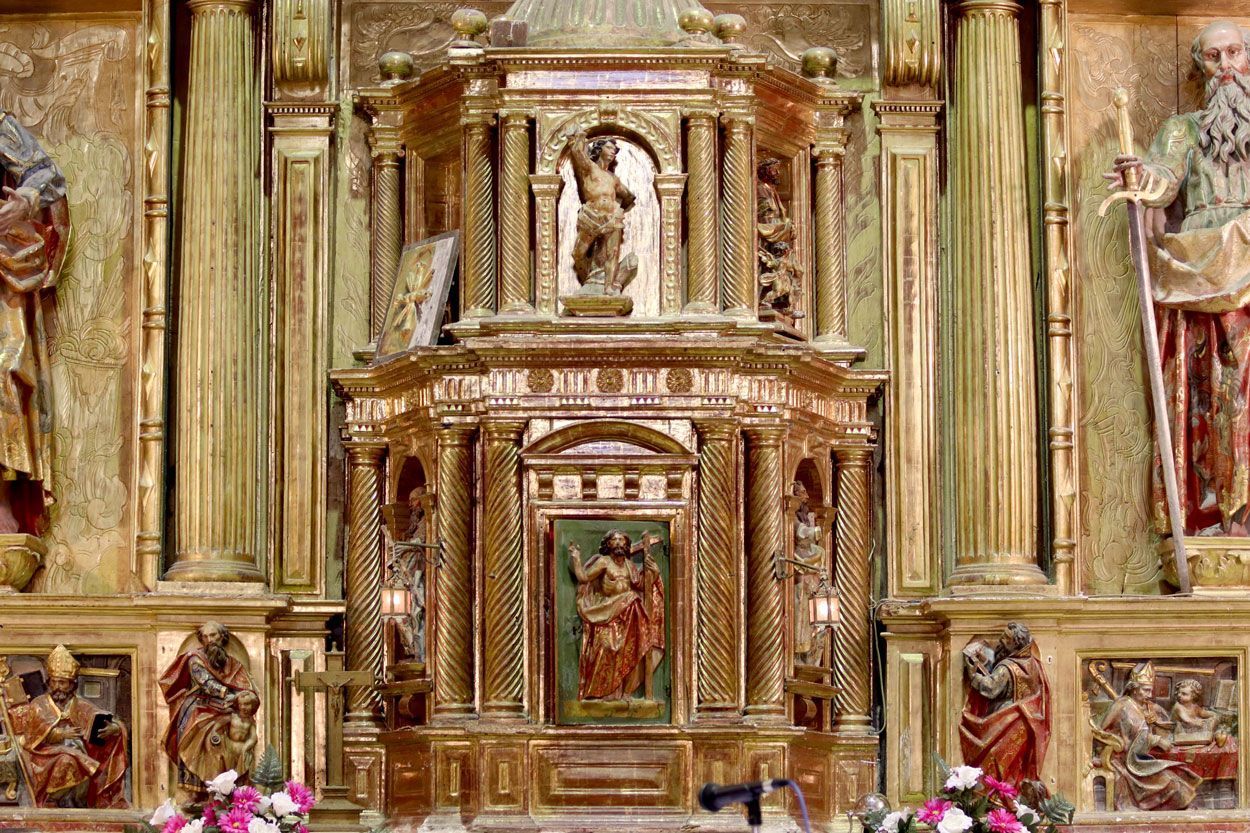 On the first of the panels of the altarpiece, two big pigeonholes house the figures of Saint Peter, with the keys that identify him, and Saint Paul, holding a long sword. 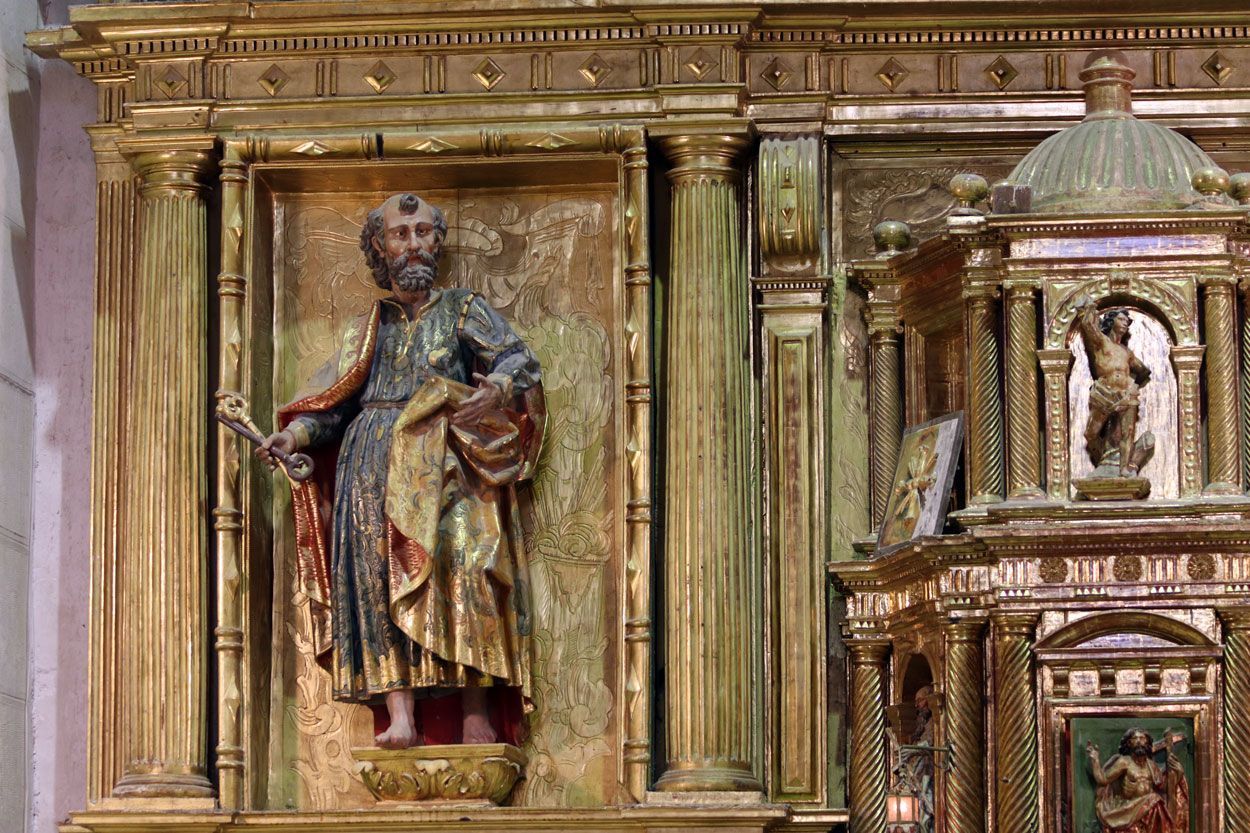 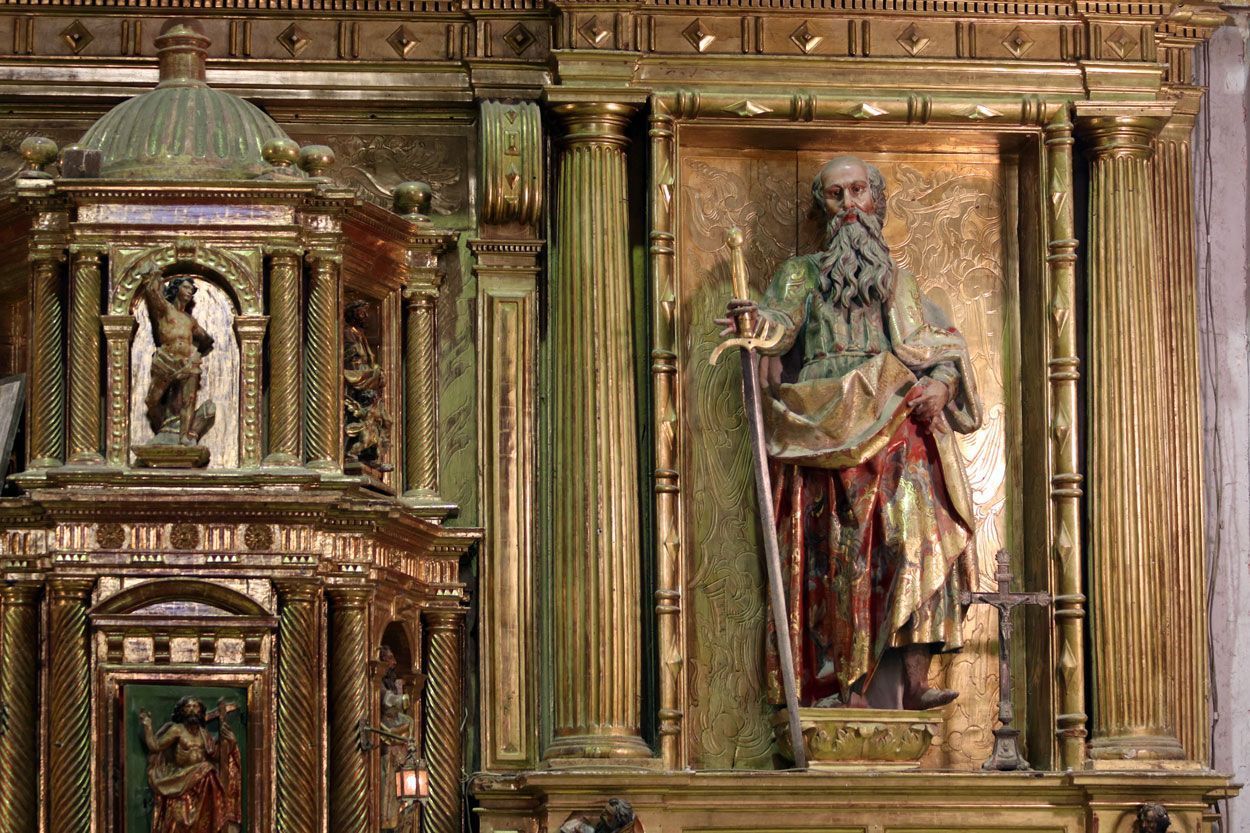 Over this panel stands another strip in which some interesting reliefs of the Fortitude (bearing a column) and the Temperance (pouring water into wine) appear, which are complemented with the strip immediately above, where we see the effigies of the Prudence and the Justice (with a scale).

The main panel houses the niche with the image of the Assumption, a carving of high sculptural quality, accompanied with Saint John the Baptist and Saint Joseph with the Child. 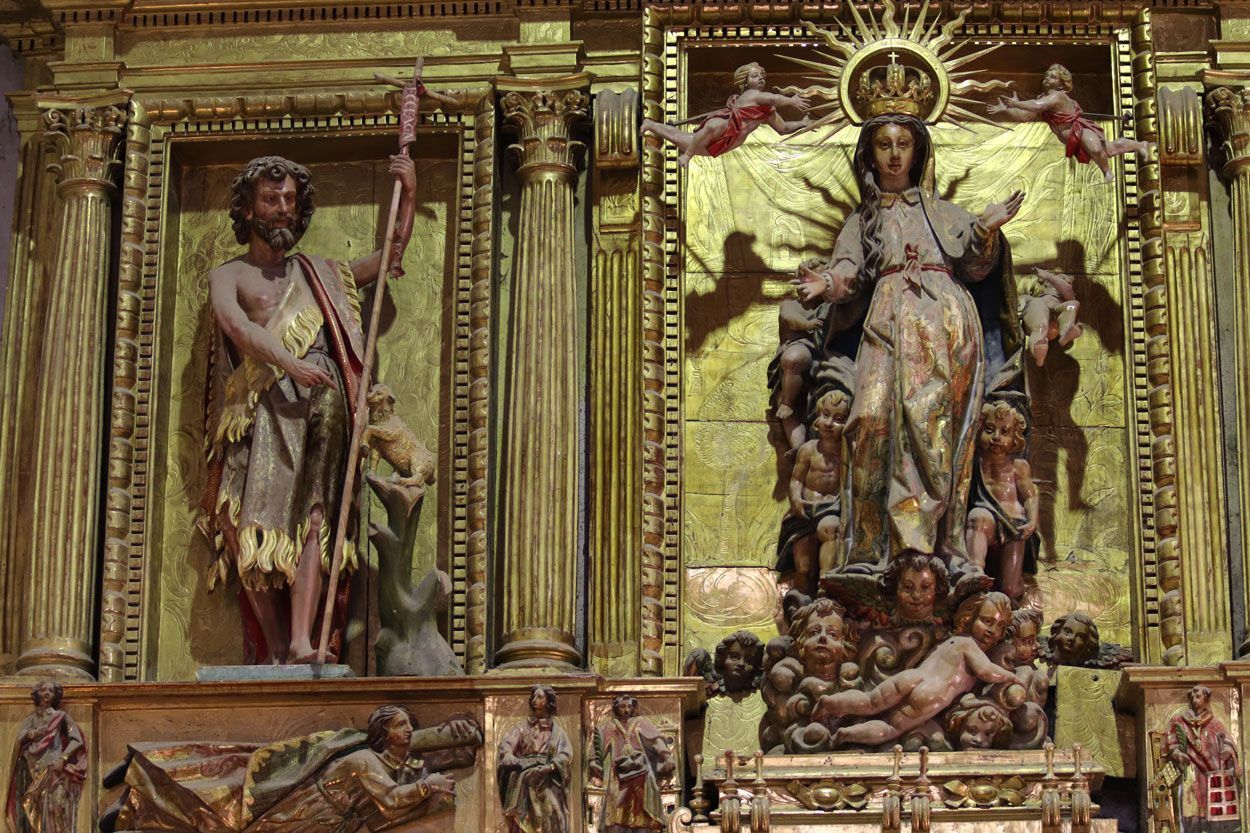 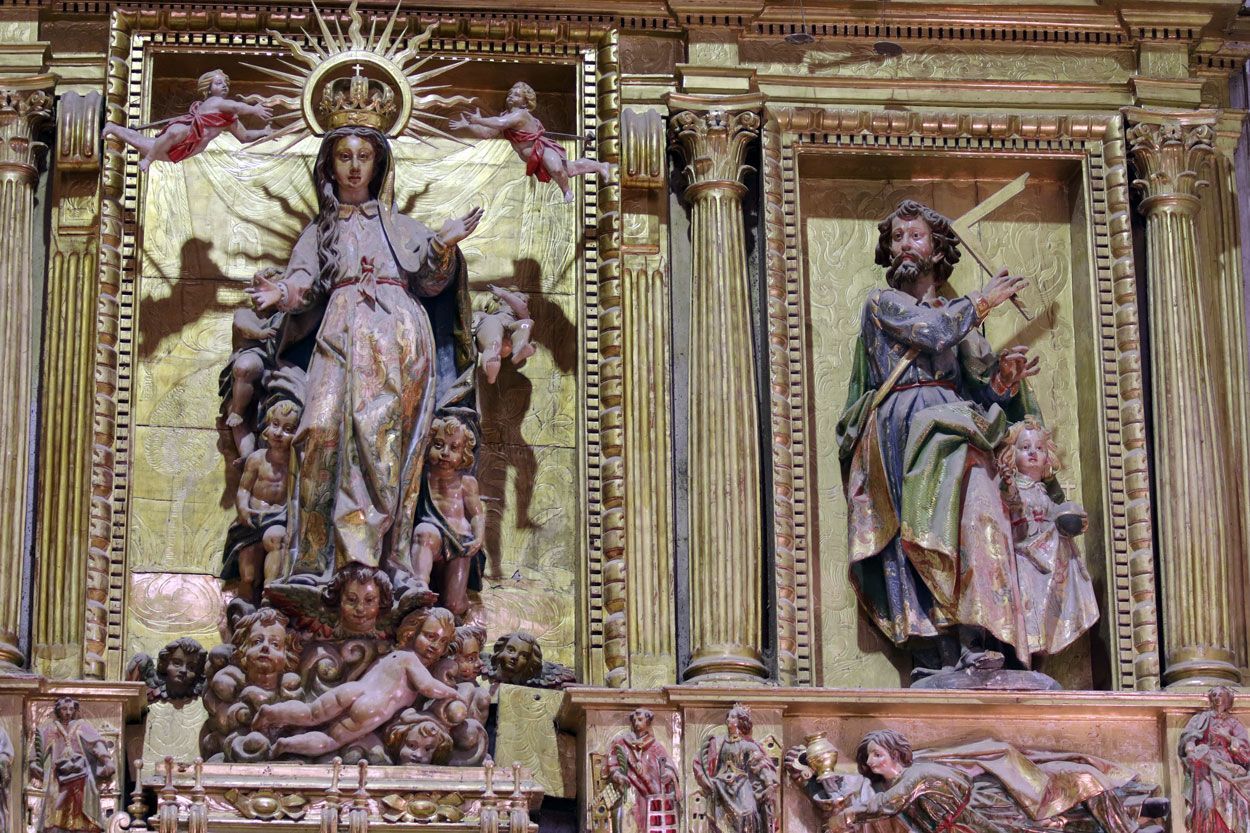 The altarpiece ends with an attic in which the Calvary scene stands out, crowned by a pediment from which the figure of the Eternal Father emerges holding the globe. On both sides of the Crucifixion, we find the main representatives of the mendicant orders that still had great power in the province: Saint Dominic and Saint Francis. 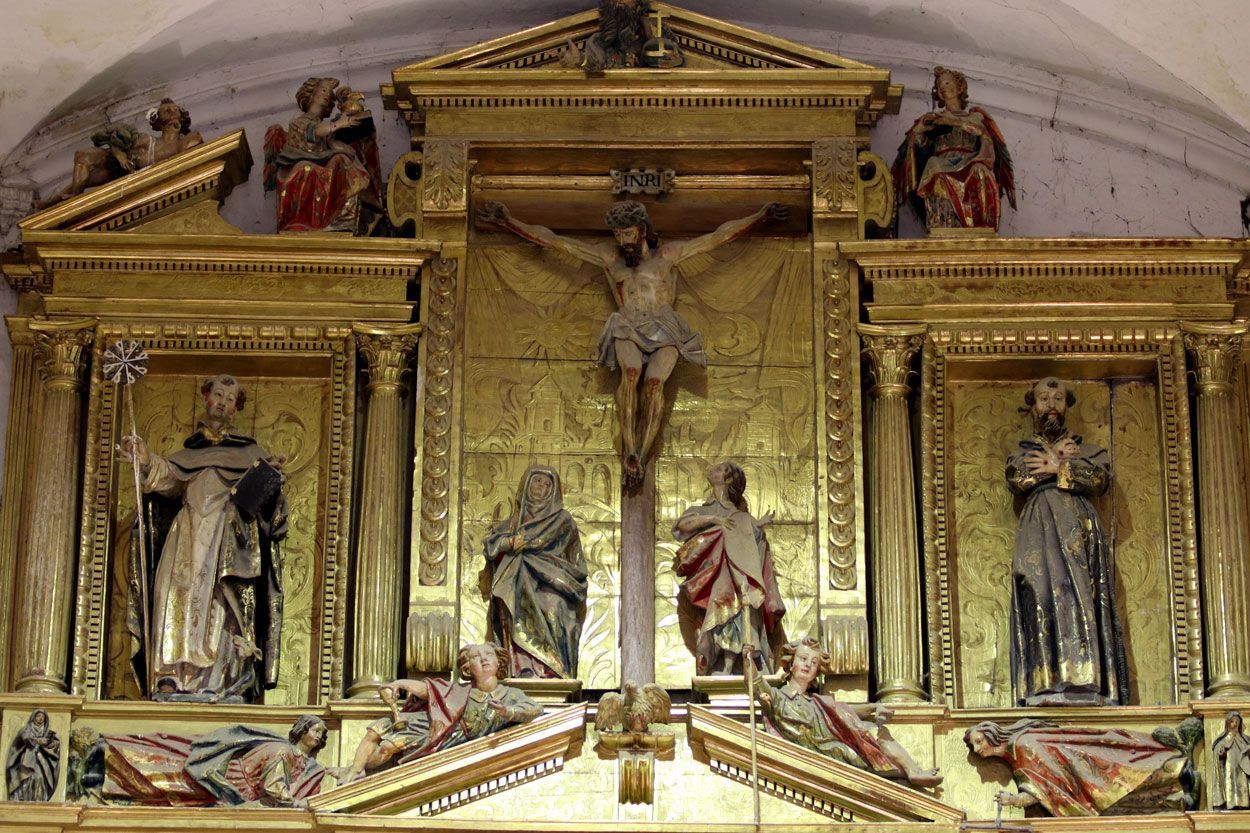 Finally, before getting out of the temple, it is worth paying attention to the stoup. When the Renaissance aquamanile of the sacristy was dismantled, they had the nice idea of relocating some of its remains around the stoup. We see an orant, accompanied with an angel that holds a column, next to a female figure framed in a scallop shell that could be identified as the Faith. Although the work has lost its original meaning, its relocation in year 1700 lets us still contemplate these beautiful stone sculptures. 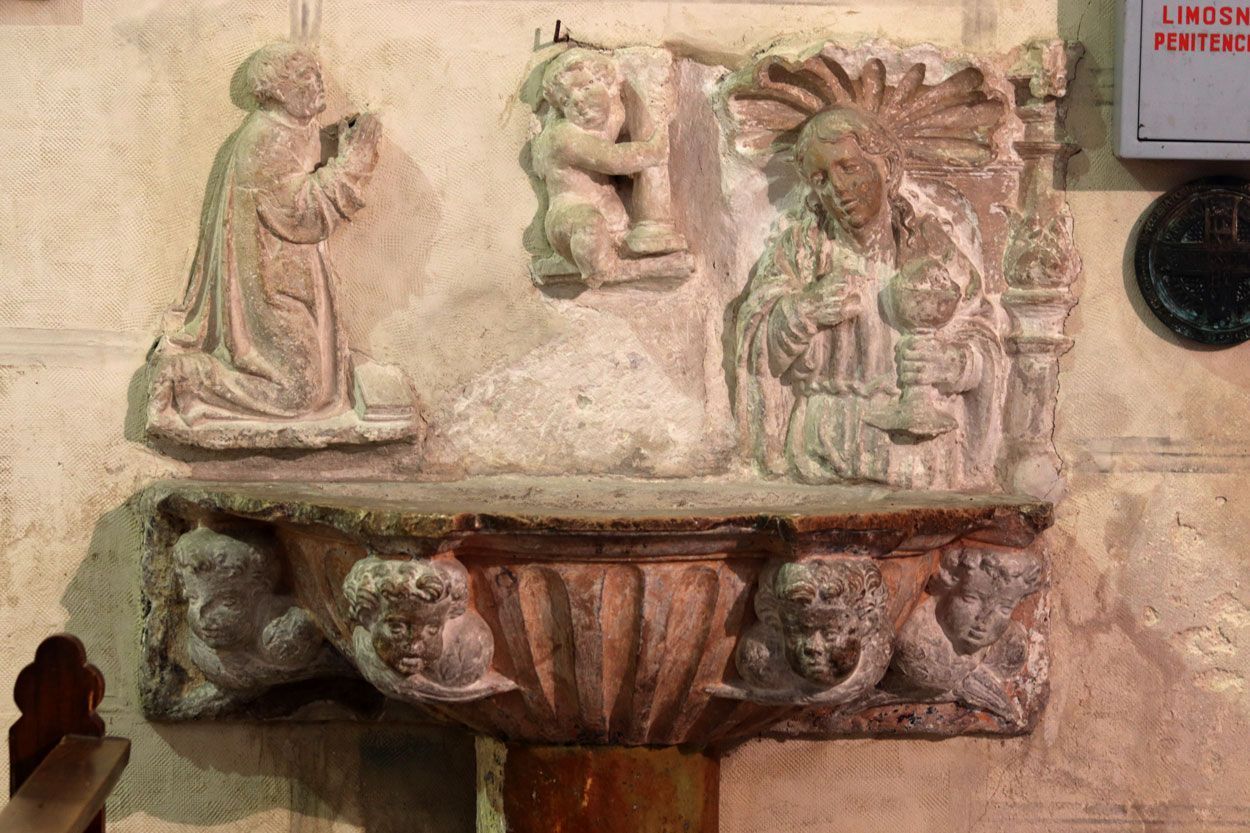