La Puebla de Arganzón, located in the County of Treviño, is one of the best preserved towns in Álava. Founded under the shelter of the castle of Arganzón, Sancho VI of Navarre, the Wise, was the king in charge of granting the fuero to his population in 1191. However, despite its beginnings as a free town, it subsequently became part of the manor of the powerful Velasco family. Its historical centre keeps important vestiges of that past, such as the design of the three original streets of the town, part of the primitive walls or the bridge over the Zadorra river. Outside the south gate of the town, we find a pilgrim hospital dedicated to Saint John the Evangelist, which, after a renovation on the 18th century, is attached to the hermitage of Our Lady of Antigua. In addition, the streets still maintain colourful civil and palatial buildings that show the power of their former neighbours.

The patronage of the Velasco and the Gordejuela families

The church of Our Lady of the Assumption would not be the same without the participation of two of the great families that lived in the town during the 15th and 16th centuries. These are the Velascos and the Gordejuelas. The Velascos were the lords of the town and amassed great power, even becoming Constables of Castile. One of their members, probably the bishop Juan Fernández de Velasco, defrayed the vaults of the church, in which we see the family’s coats of arms, and conceived the apse as a family cemetery that was not finally carried out. The ones that are buried in the presbytery are the couple formed by Mariana Villalobos and Juan Gordejuela Ibargüen, who bought their mannerist wall tomb from the precentor Pedro López de Escoriaza. This married couple were the owners of the Renaissance palace near the main square, where we see their portraits on both tondos of the facade. 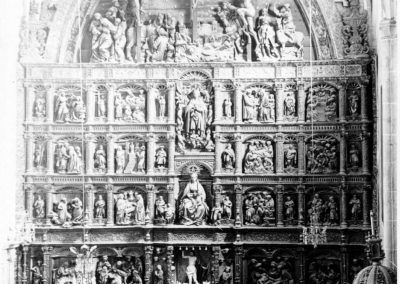 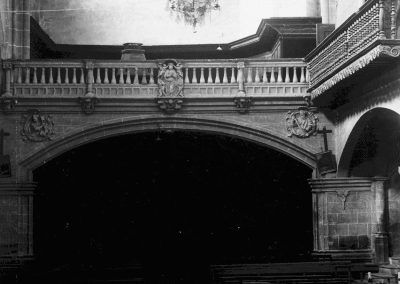 The temple of Our Lady of the Assumption is a magnificent example of Late Gothic religious architecture. It is possible that it had a certain defensive function in case it was necessary, as it can be deduced from the towers on the west facade. The bell tower was built on one of them, which was crowned with a high quality baroque spire. On the facade we find an ogee arch with a tympanum in which a fine carving of the Virgin Mary with Child stands out, under a Gothic baldachin surrounded by angels. On the exterior of the arch Saint Peter and Saint Paul flank a coat of arms with crossed keys. Over this facade we can see a gallery with elegant Gothic traceries. 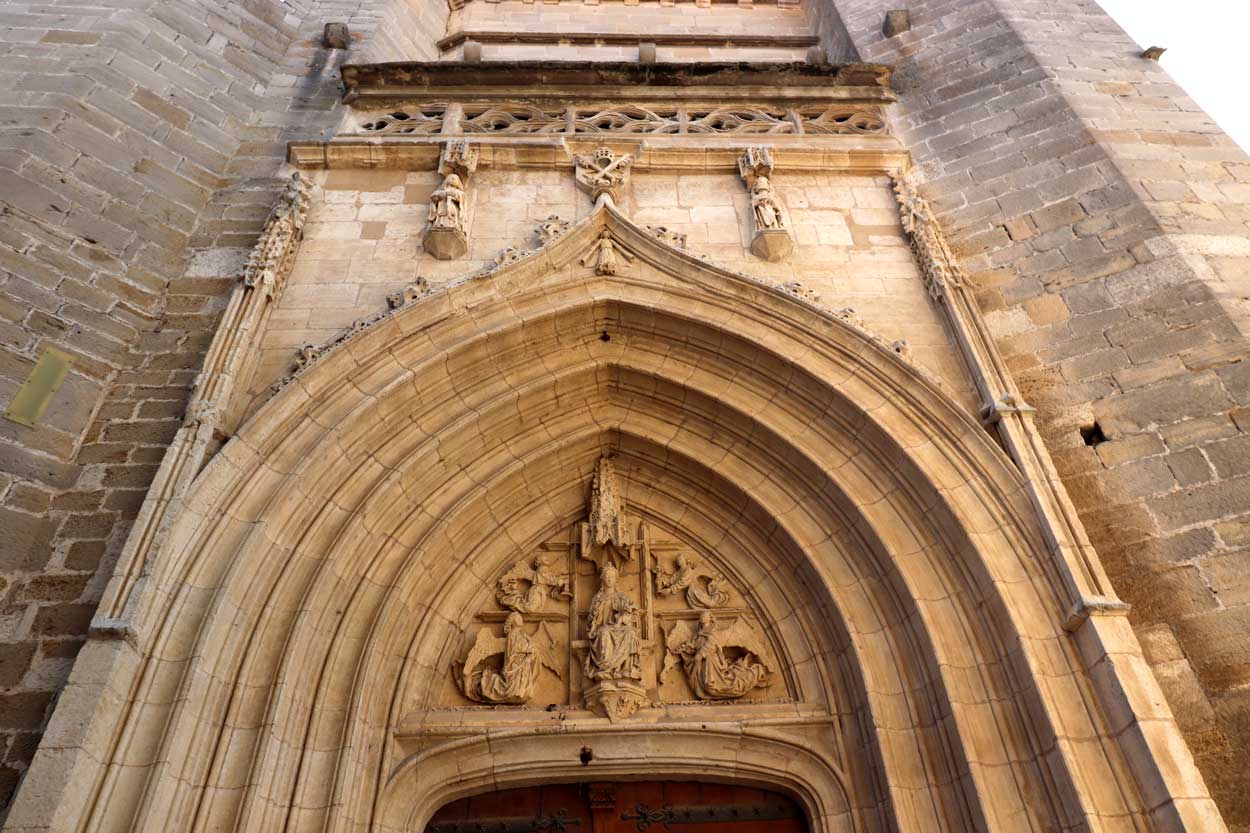 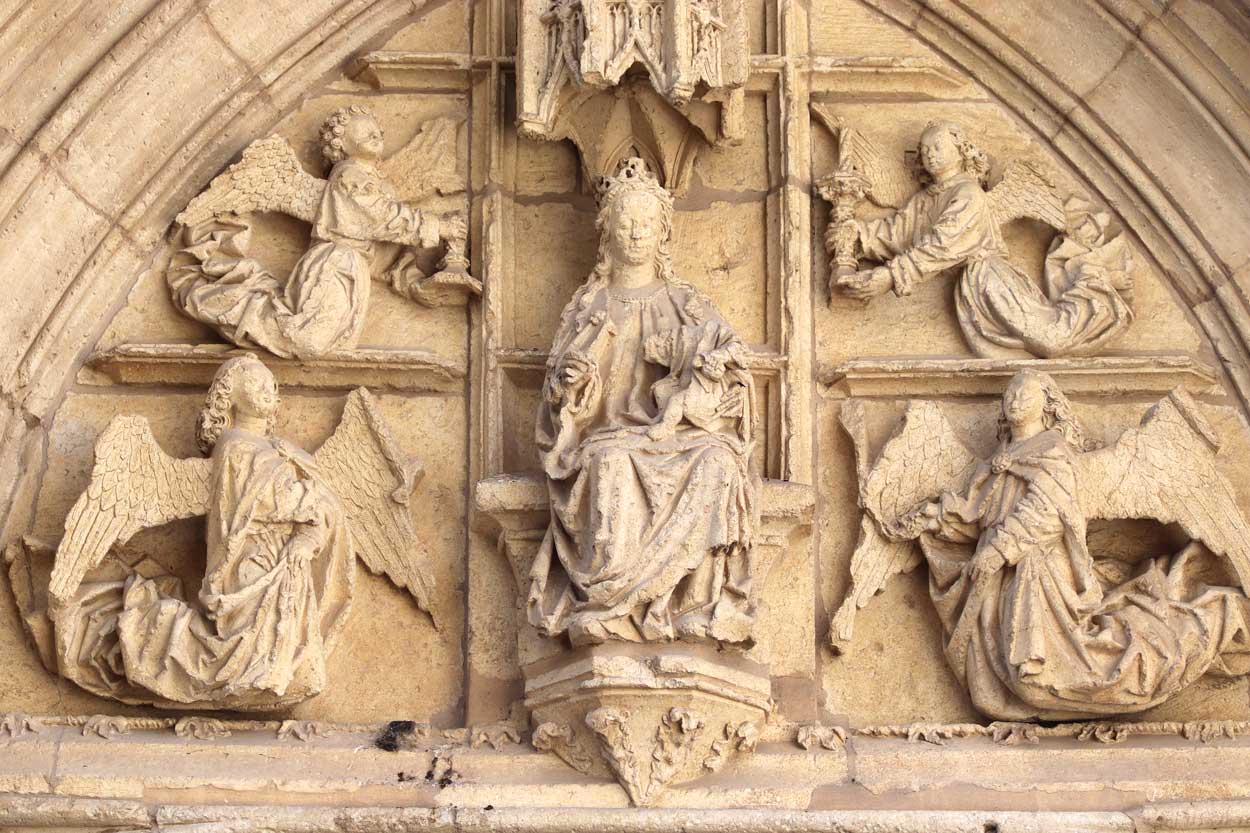 The west facade is not the only one on the church of Our Lady of the Assumption. A new Gothic access opens towards the square, formed by a series of archivolts with plant motifs on the capitals and on the discharging arch, where we see the typical thistle leafs of the Late Gothic decoration. We can see an Annunciation on the wall: the figures of the Angel Gabriel and the Virgin Mary next to a prie-dieu are separated by a vase with madonna lilies, a symbol of the chastity of the Virgin. 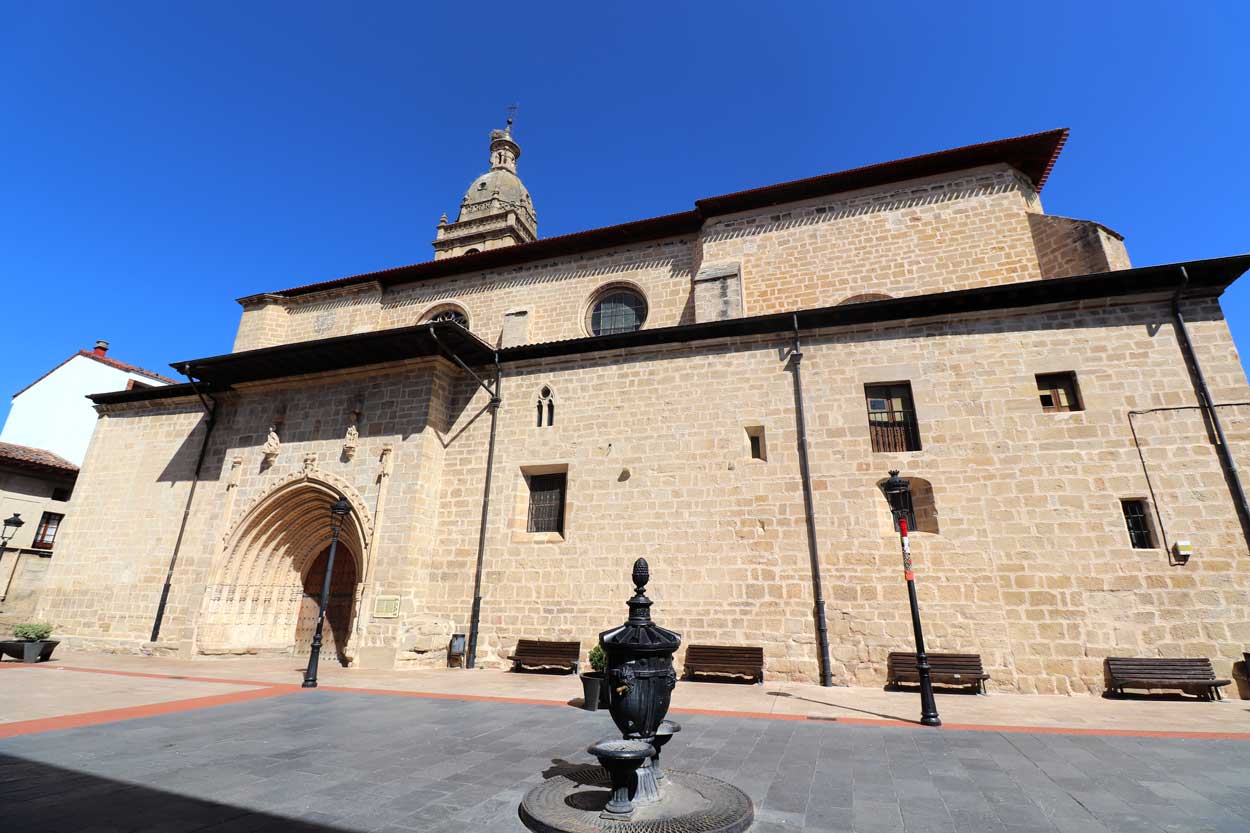 
Once inside we are taken aback by the dimensions of the building, distributed in three naves. The central one is covered by some impressive 16th century vaults of intermediate ribs with keystones decorated with great mastery, in which we see the coats of arms of the Velascos, saints, a Christ surrounded by the Tetramorph or the four evangelists… Above all, however, the one that represents the Assumption of the Virgin stands out, surrounded by twelve angels in which remains of the original polychromy can be found. 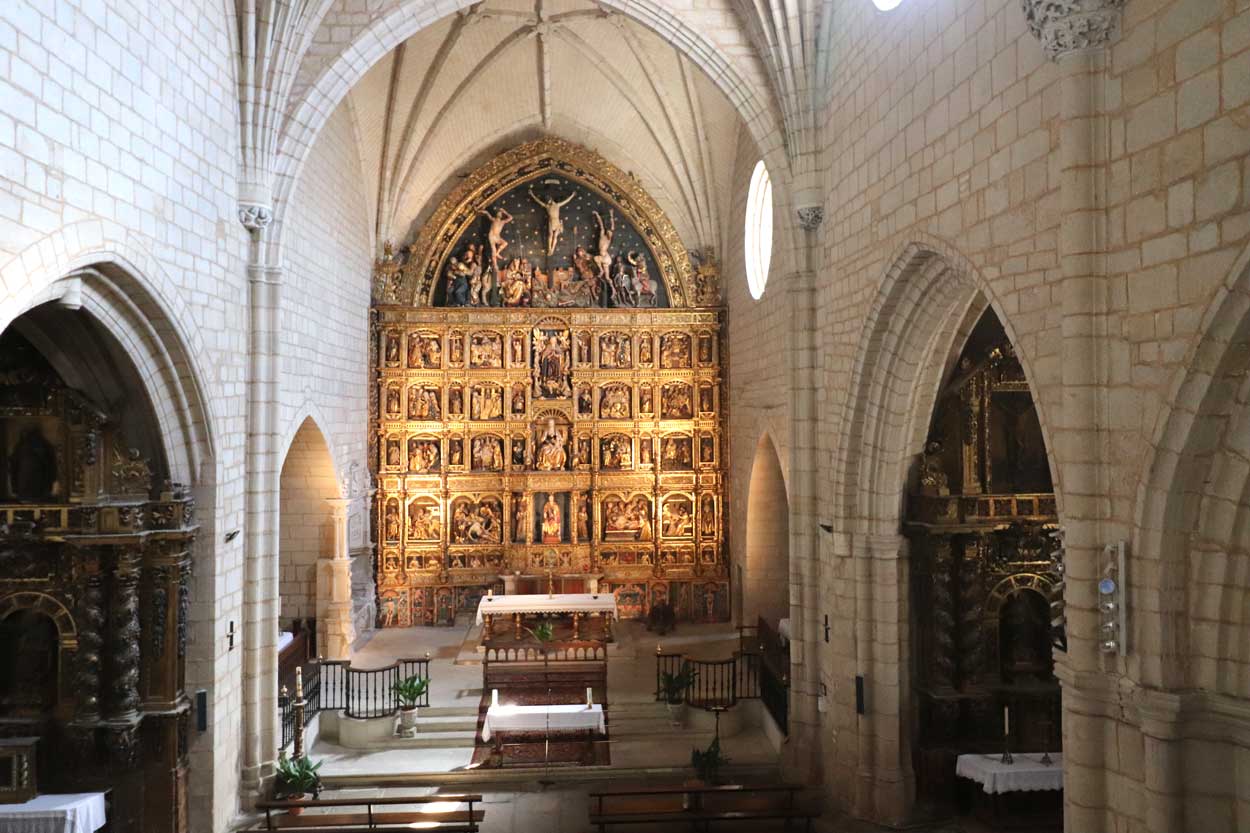 
The choir is a completely Renaissance construction carried out with great mastery, in whose front the sculpted figures of Saint Peter, Saint Paul and the Assumption of the Virgin appear. On the area below the choir we can also see an interesting set of keystones on both vaults. On the main one, we see a Christ in Majesty surrounded by evangelists, fathers of the church and apostles, whereas Virgin with the Child preside over the smaller one, surrounded by female saints. 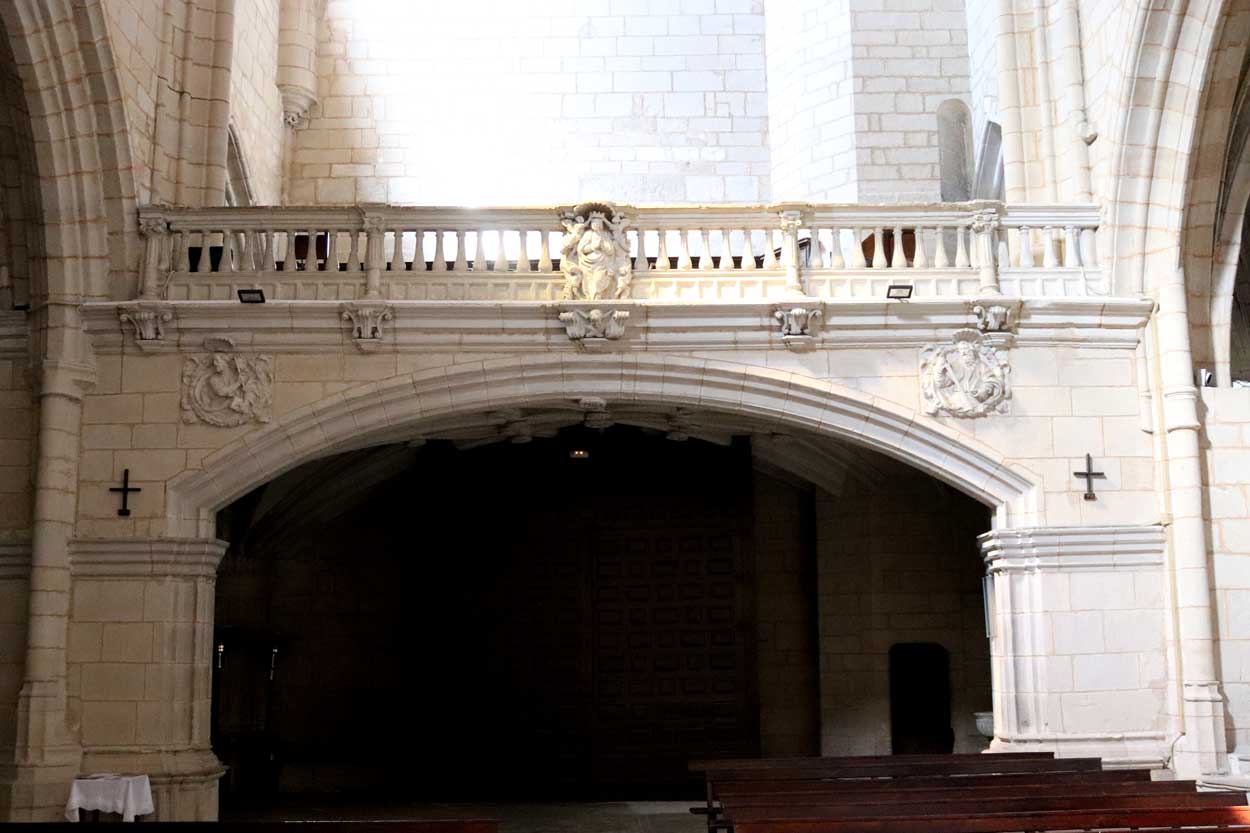 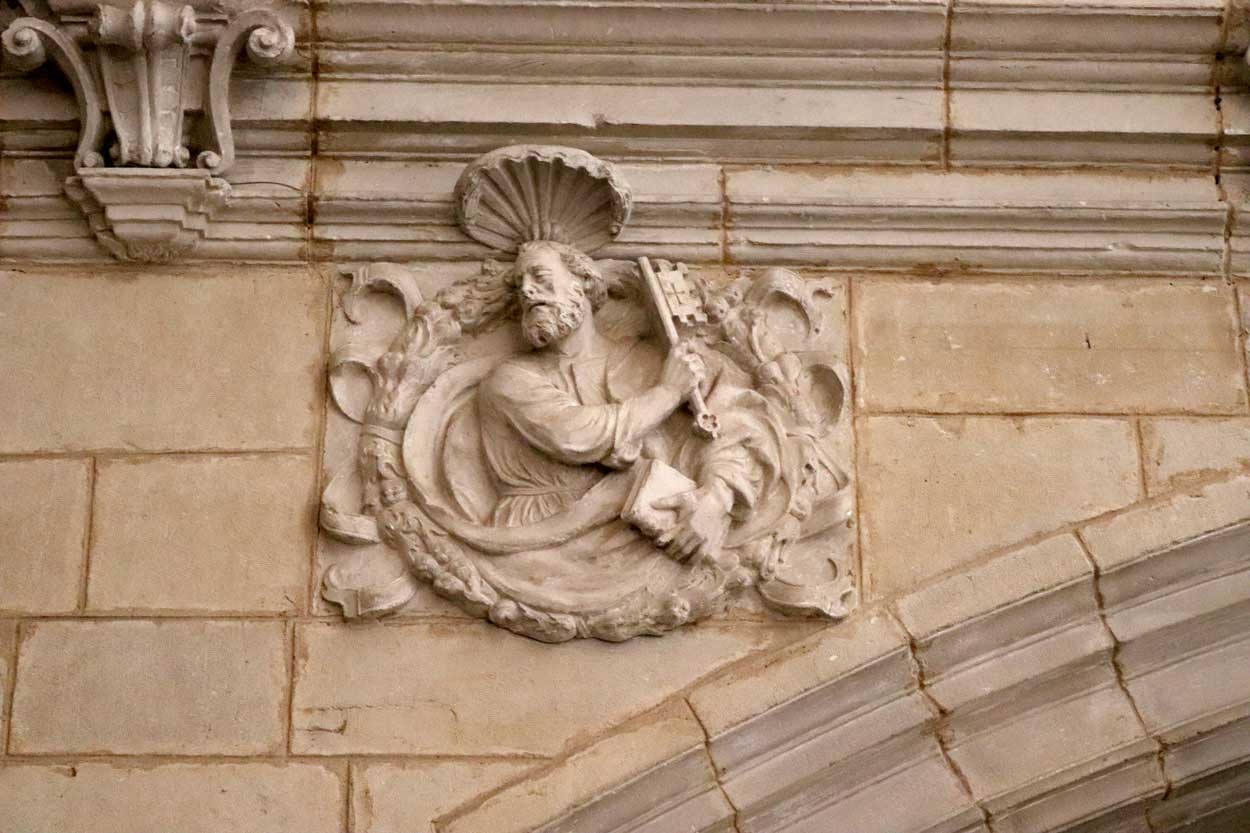 
Nevertheless, the most remarkable and spectacular element of the church is the altarpiece. Its author is unknown to date, and it is one of the highest quality and largest models of the Plateresque style in the Basque Country. Conformed as a pigeonhole, in each of the grids that delimits its vertical and horizontal sections we find luxurious scenes that have to do with three great cycles: the Redemption and death of Christ, the life of the Virgin as Mother of Jesus and the life of the Virgin from her birth to her death or Dormition. Besides, the quirks house a multitude of saints, doctors of the church and other religious figures. The large narrative reliefs of the Lamentation over the Dead Christ and The Entombment stand out, as well as the central figures of the Virgin with the Child and the Assumption. 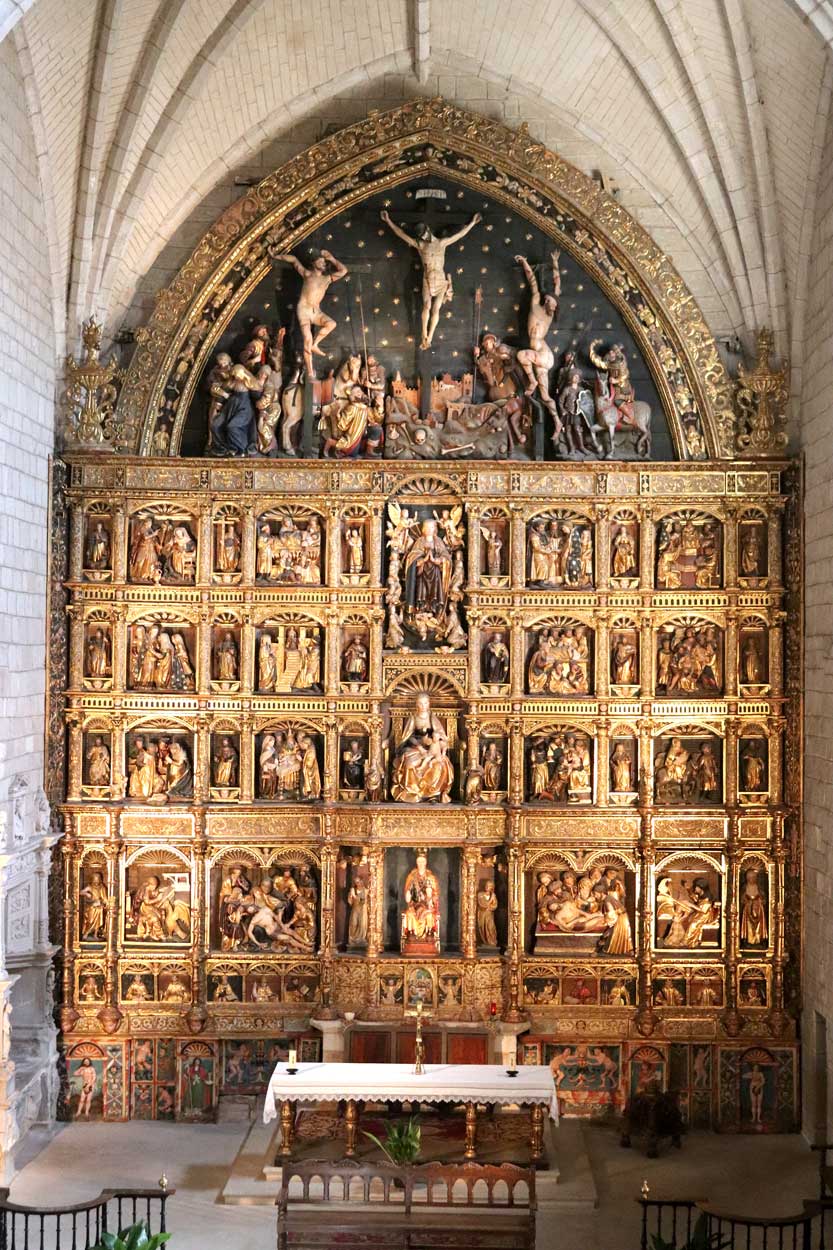 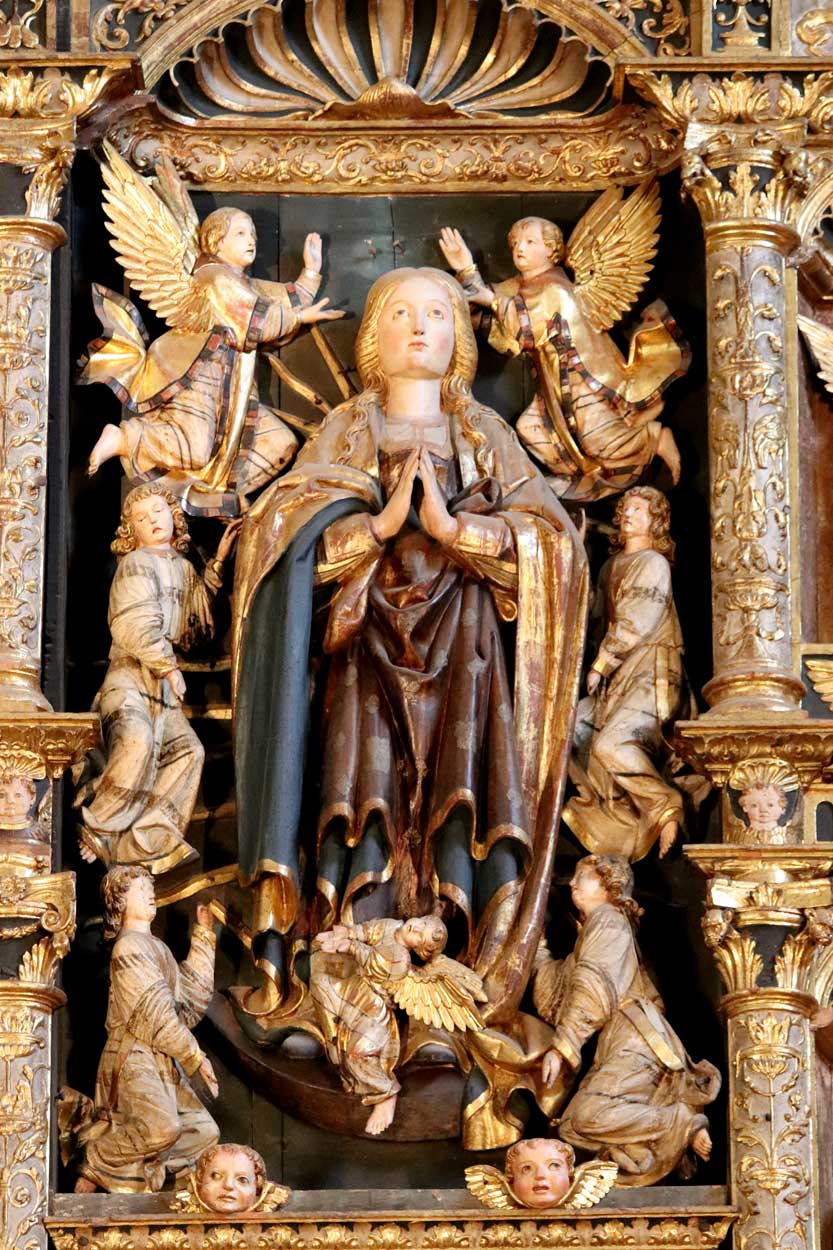 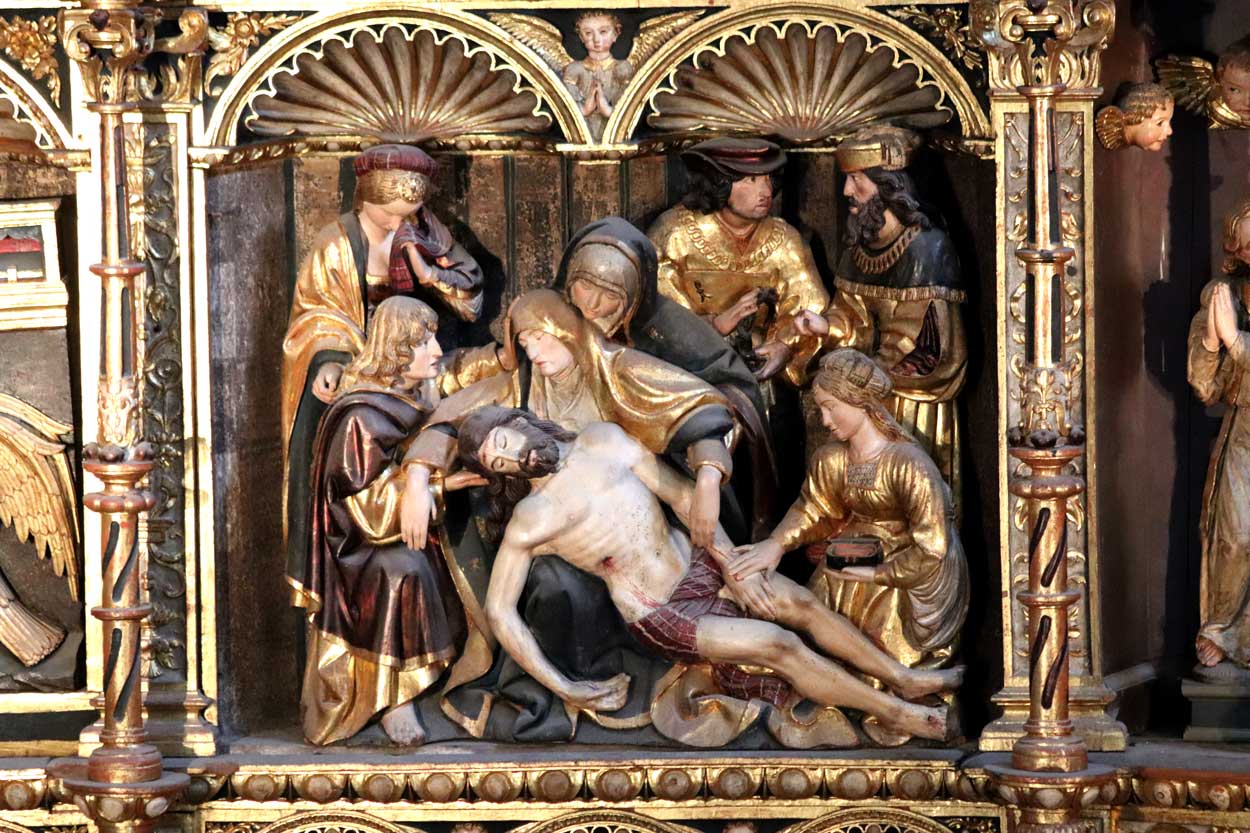 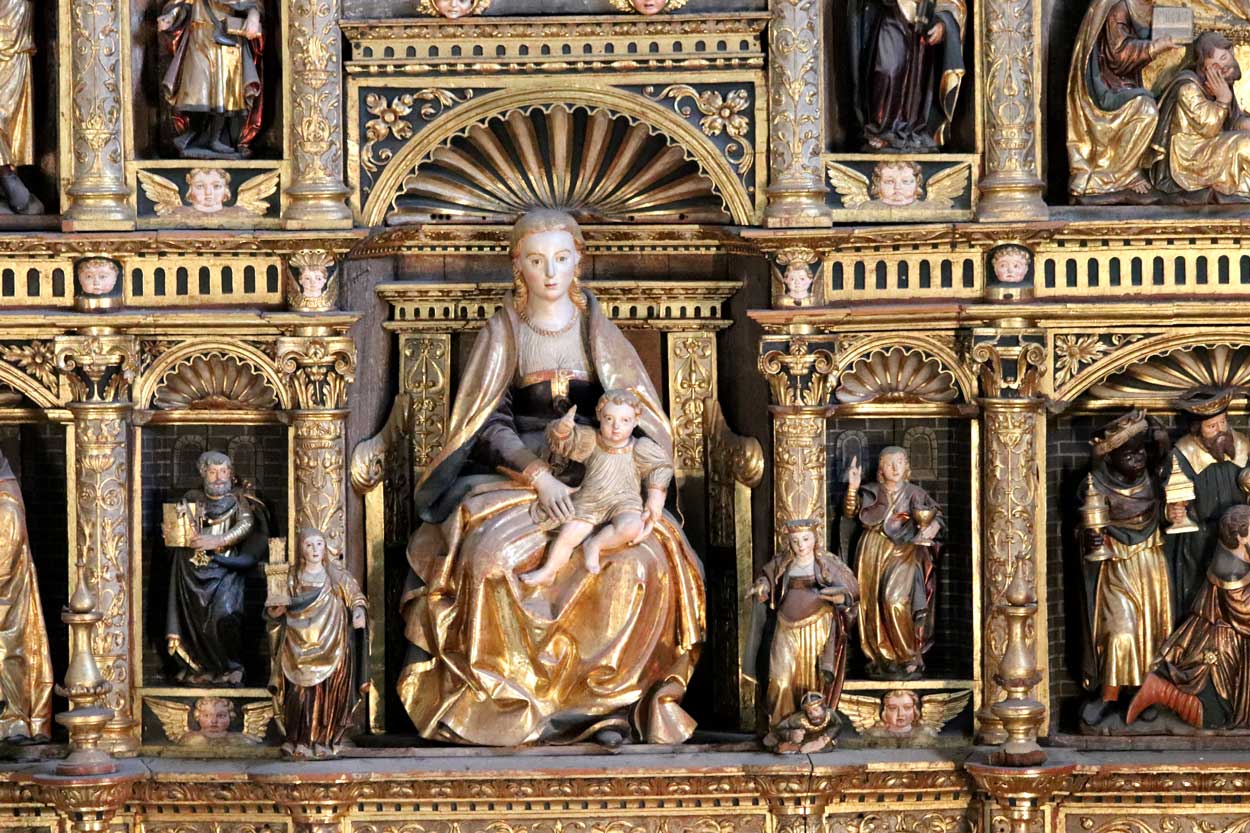 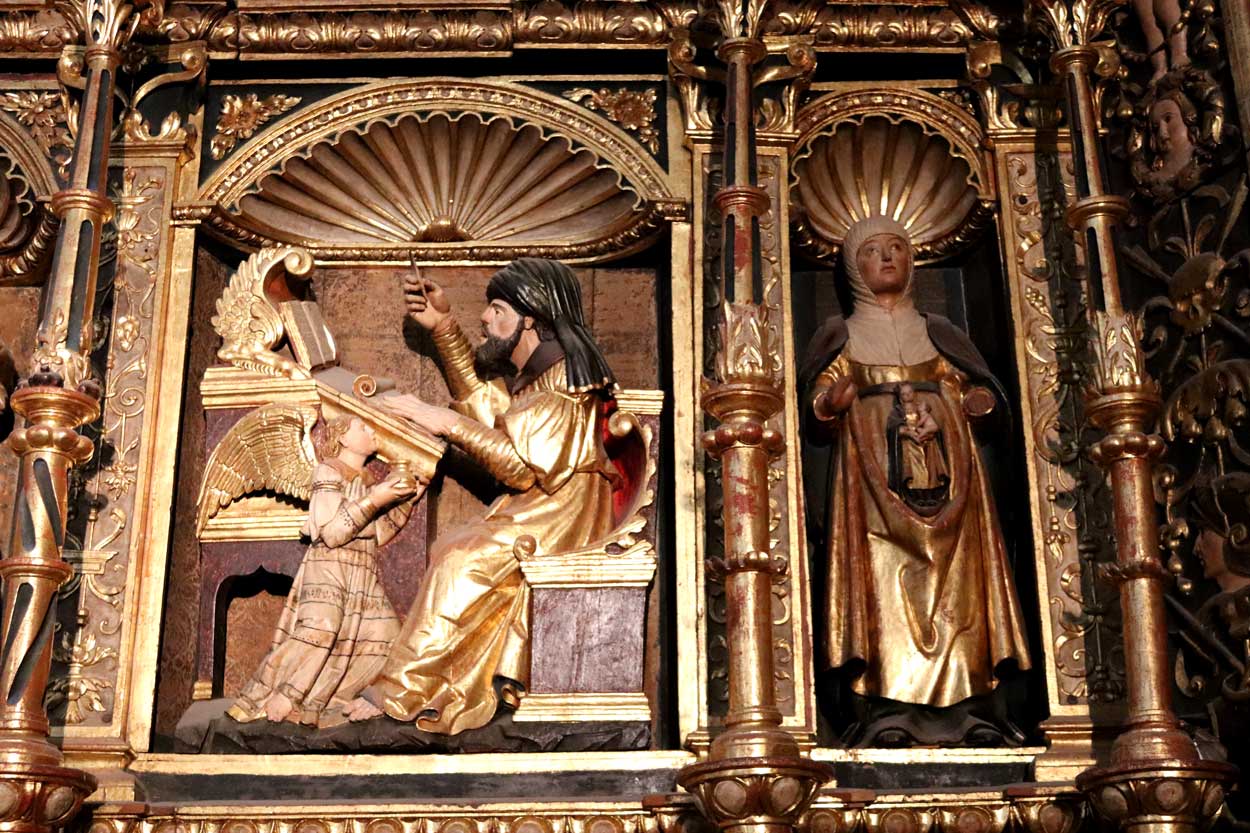 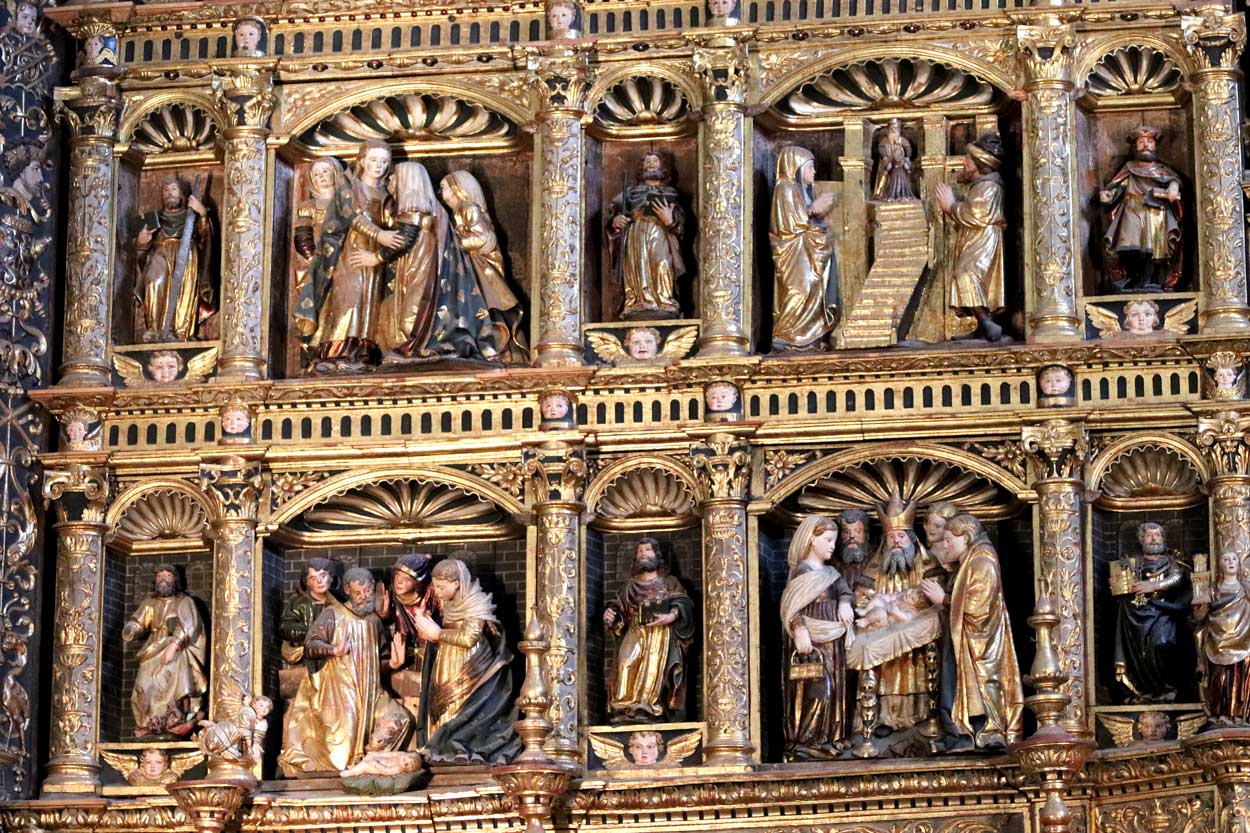 The altarpiece reaches its highest point with a large attic in the form of a tympanum that shows an immense Calvary riddled with action scenes and figures in motion that give a great drama. Over a starry night background on the city of Jerusalem, the Crucified stands between the two thieves. Roman soldiers dressed with 16th century clothes surround the crosses while the Virgin Mary faints on a corner, generating a striking scene with great persuasive power. 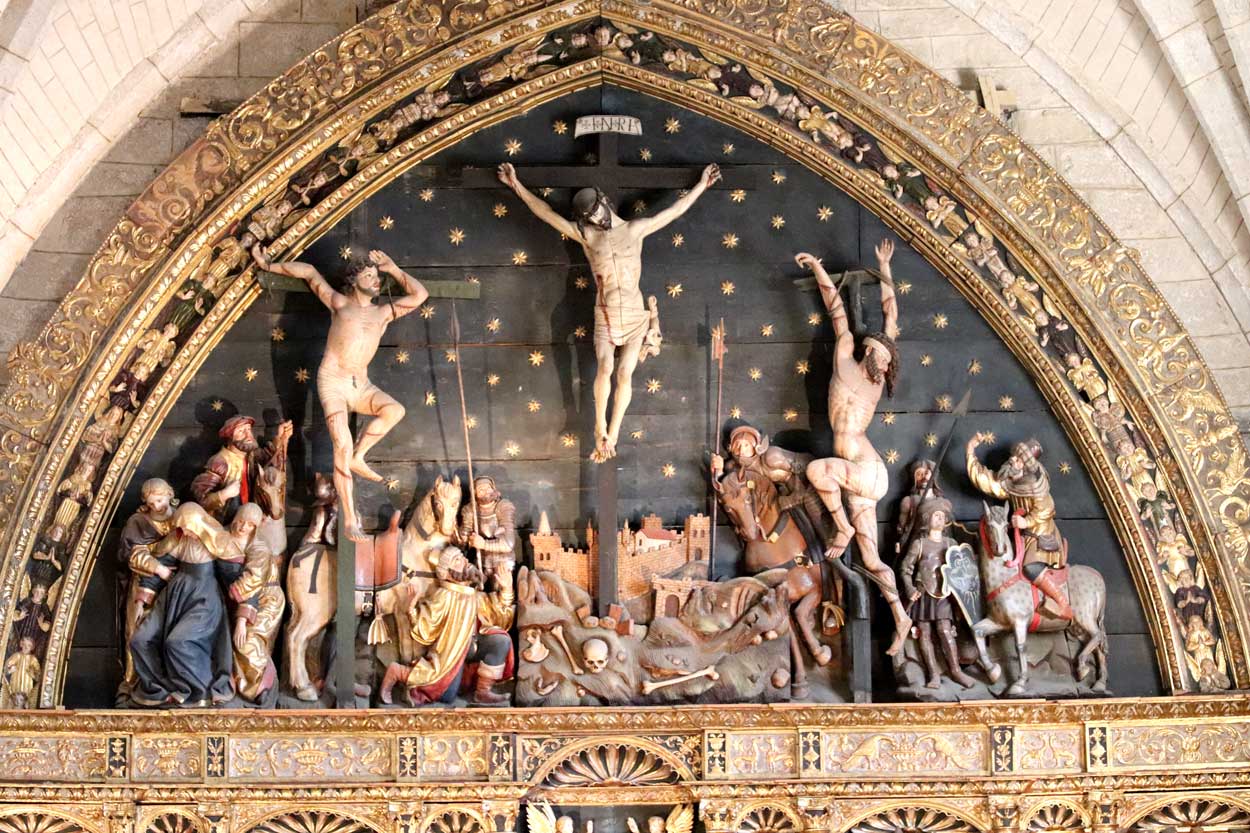 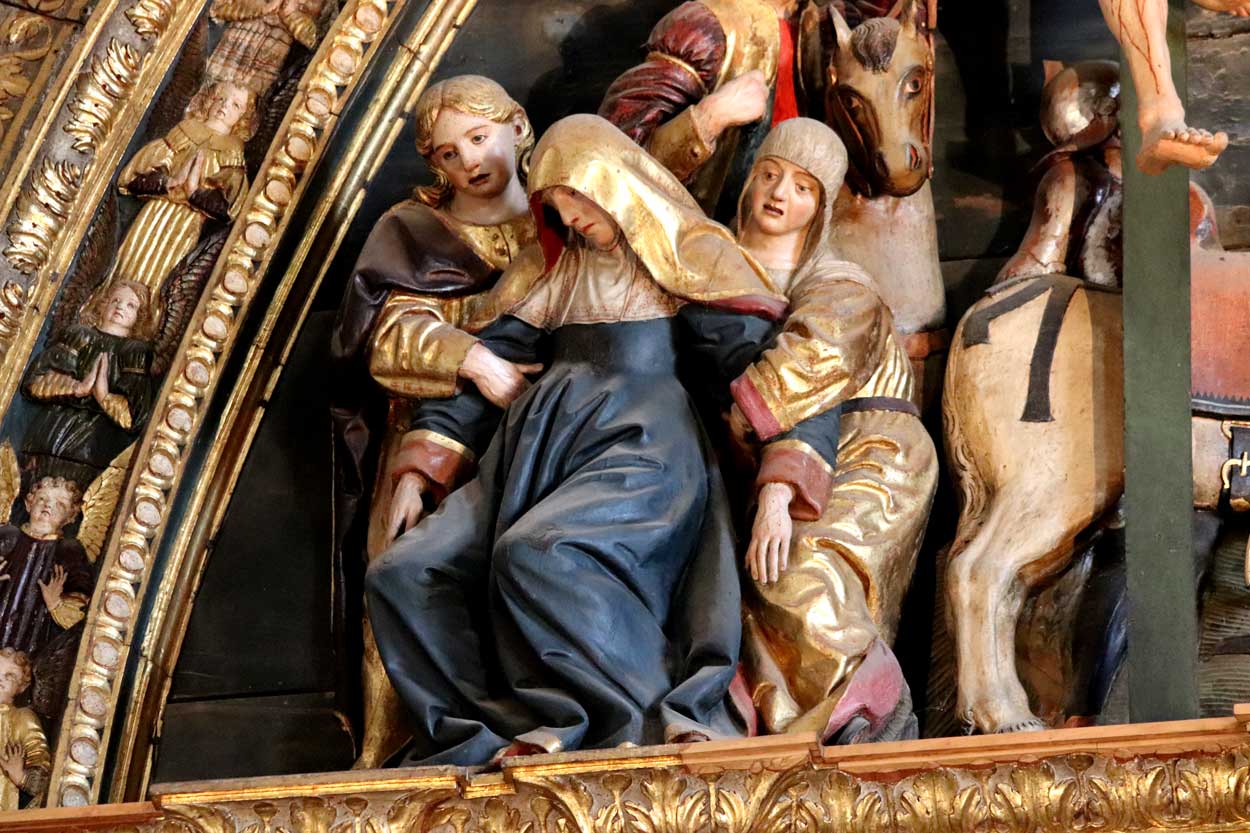 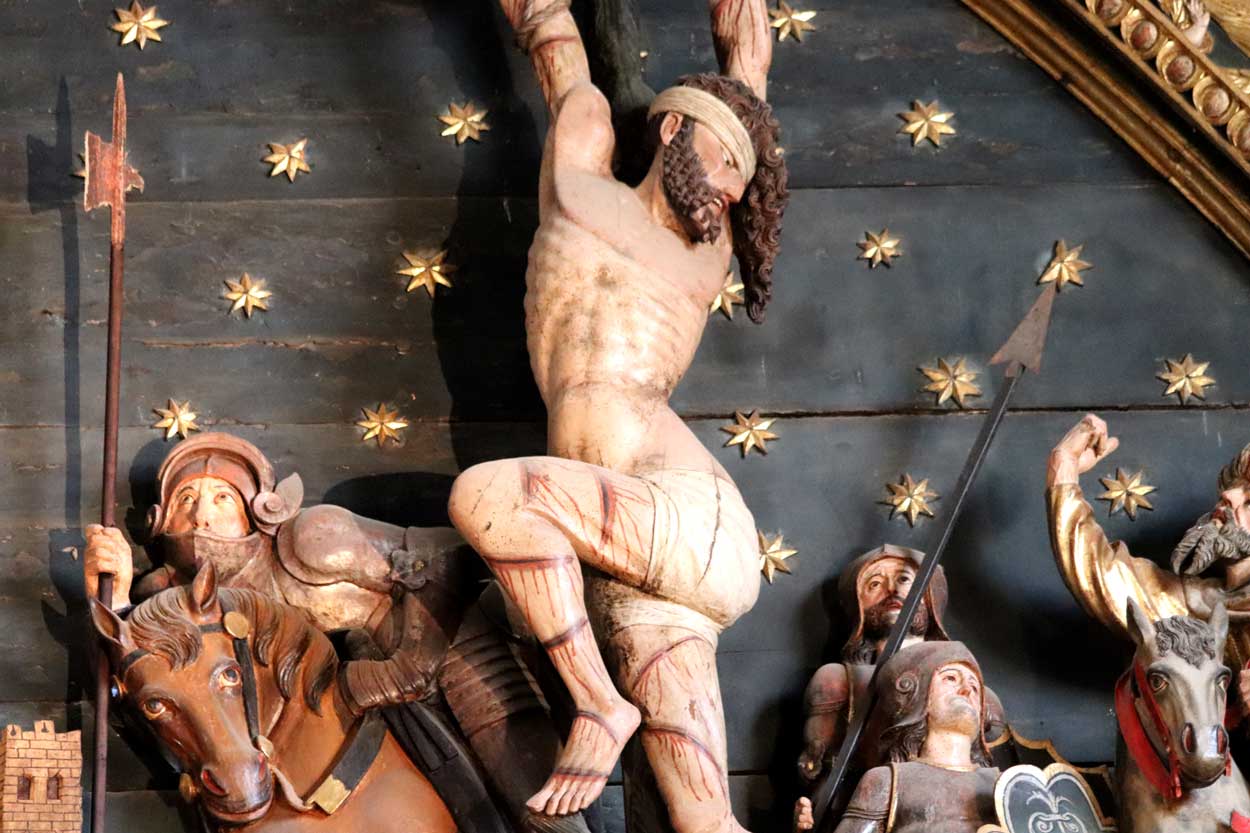 Inside this altarpiece, an image of the late 13th or early 14th century of the Virgin with the Child (or Andra Mari) stands out. It is known as the Virgin of Antigua. For centuries she received worship on the hermitage outside the town, which survives dedicated to her after many alterations. It is a greatly crafted carving that belongs to a widely known type of Virgins with Child, mostly found on the Basque Country, Navarre and La Rioja. 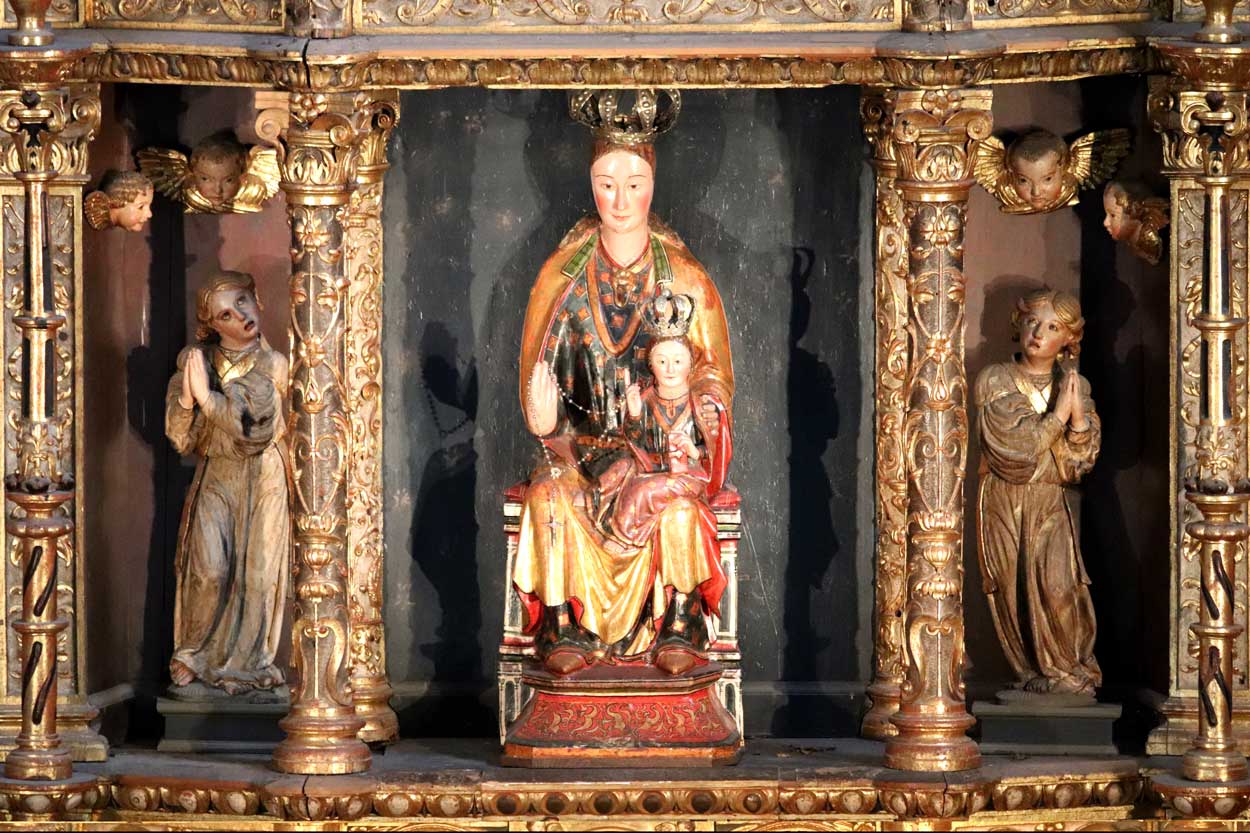 The sepulchre of the Gordejuelas

The sepulchre of the Gordejuelas is also remarkable for its quality, a mannerist Renaissance work in which the deliberate deformations of the entablature can be appreciated to generate a sense of depth. It was originally ordered by Pedro López de Escoriaza, precentor of the Cathedral of Santa María of Vitoria. This is the reason why it still preserves his coats of arms, although it was acquired by the Gordejuela-Villalobos couple thirty years later. The lower part preserves the sarcophagus over which a cartouche held by angels can be seen, crowned by the figures of Saint Peter and Saint Paul at both sides. On the next floor, a Pietà is accompanied by the Magdalene and Saint John and, on the top, a relief of the Ecce Homo is complemented by the allegories of the Faith and the Hope. 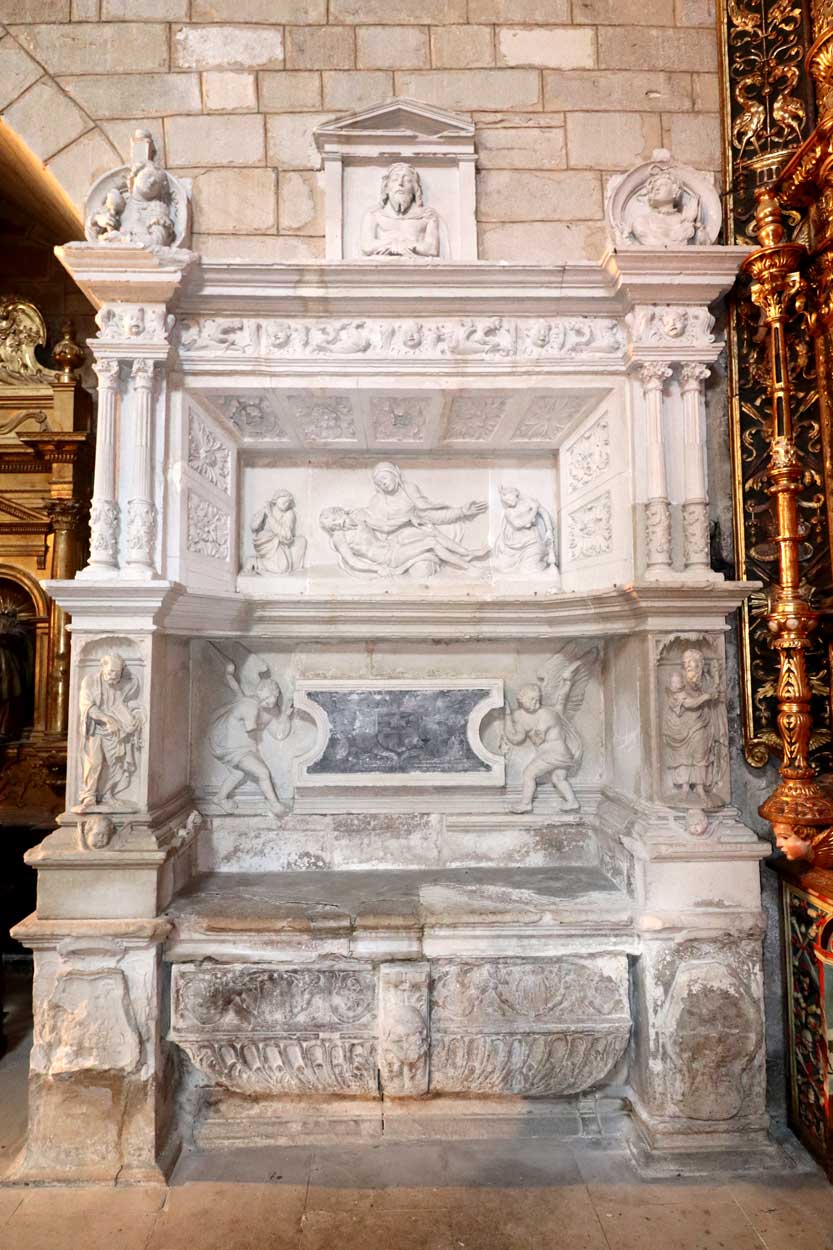