The Church of Saint Andrew the Apostle of Legarda

The church of Saint Andrew of Legarda is partially concealed by the attached buildings around it. The entire south wall is almost hidden by the parish house, and the portico closed, so the access to the church can not be seen. The most notable on the outside, beside the volume of the Romanesque tower, is the line of smooth corbels and the remains of a walled up oculus in the east end, with a Gothic tracery, which informs us of the extension of this area in the 15th century, more evident towards the interior.

The Romanesque tower of Legarda

There are very few bell towers of Romanesque origin in Álava today. Without the slightest doubt, there were, although the most usual formula to house the bells in the Middle Ages was the bell gable, at least according to the remains left. It was usually located at the foot of the church and it could be placed as an extension of the west wall or in the south, near the entrance door. The Romanesque bell tower of Legarda is located directly on the last section of the vault and, in order to hold it, we see some thick ribs towards the interior, which are crossed forming a solid structure capable of bearing the weight. However, the ravages of time have caused the tower to lose its roof, allowing the water to form damp and leaks that have little by little damaged the tower and the interior vaults. Despite its state of abandonment, it continues to be one of the most representative cases of Romanesque towers in our territory. 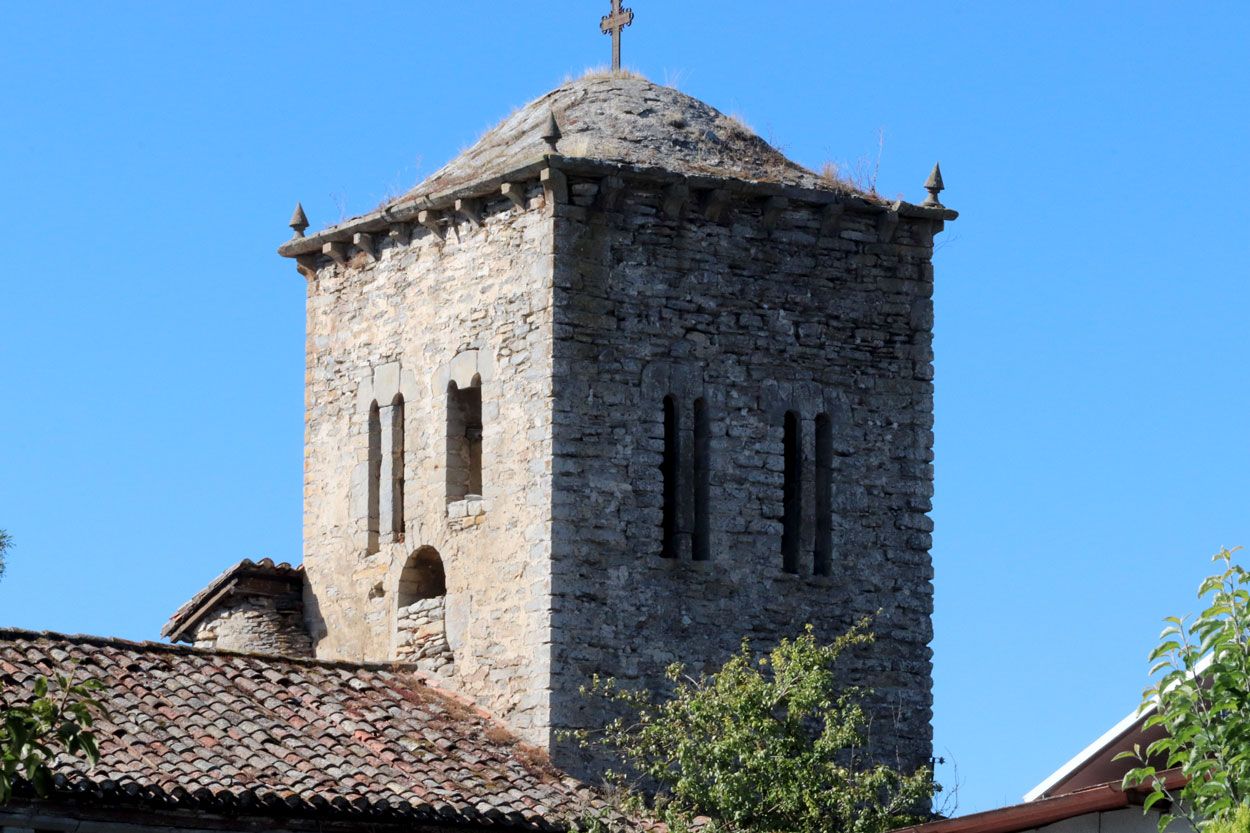 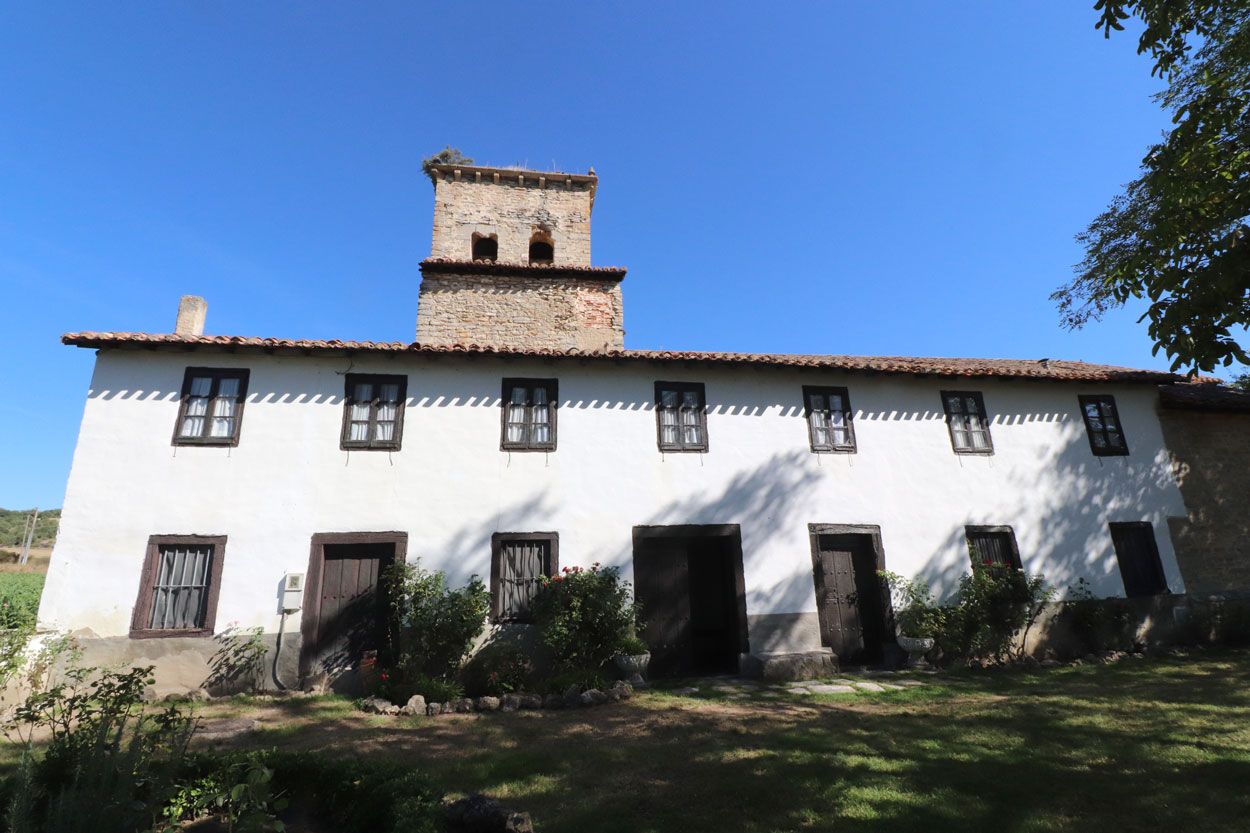 In the 20th-century photographs of the church of Legarda, we can see a better general condition of the building at first sight, so its decline and its damp problems have been developing in recent decades. Around the 1950s, when the images were taken, the tower still had a roof and, besides, it preserved all the pieces that have subsequently fallen. We do not keep general photographs of the interior, but we do have some that show us in detail a series of panel paintings dating from the 16th century. They were a bit damaged, but they were of good quality and hung on the walls of the temple. In this set we see scenes as the Visitation, the Adoration of the Magi, the Vocation of Saint Peter and Saint Andrew, and Saint Andrew imprisoned before the governor. Everything indicates that they are the remains of the original altarpiece of the church, dismantled by order of the visitador in the 18th century. The fate of those paintings is unknown today. 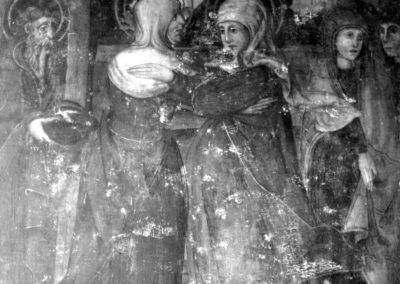 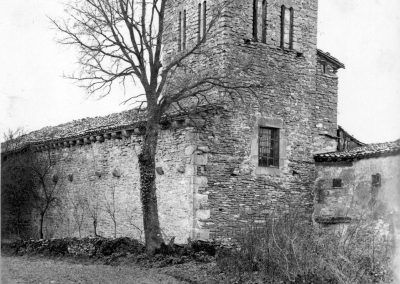 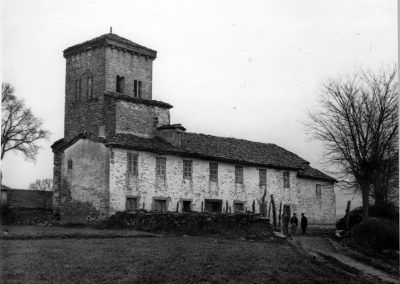 Church of Saint Andrew the Apostle

The church of Saint Andrew of Legarda is partially concealed by the attached buildings around it. The entire south wall is almost hidden by the parish house, and the portico closed, so the access to the church can not be seen. The most notable on the outside, beside the volume of the Romanesque tower, is the line of smooth corbels and the remains of a walled up oculus in the east end, with a Gothic tracery, which informs us of the extension of this area in the 15th century, more evident towards the interior.

Once in the portico, we see the door of the church, very simple and without any decoration. This type of access is more reminiscent of the facades of civil buildings than those of religious ones. We know that around the 14th-15th centuries it replaced the original Romanesque facade, which was completely dismantled. On the threshold, we find a table in which we can read: “Alabado sea el Santisimo Sacramento y Maria Santisima concebida sin pecado original” (“Praised be the Most Blessed Sacrament and Blessed Mary conceived without original sin”). It is a decontextualised table that possibly belonged to a monument or an ephemeral altarpiece of the 19th century. 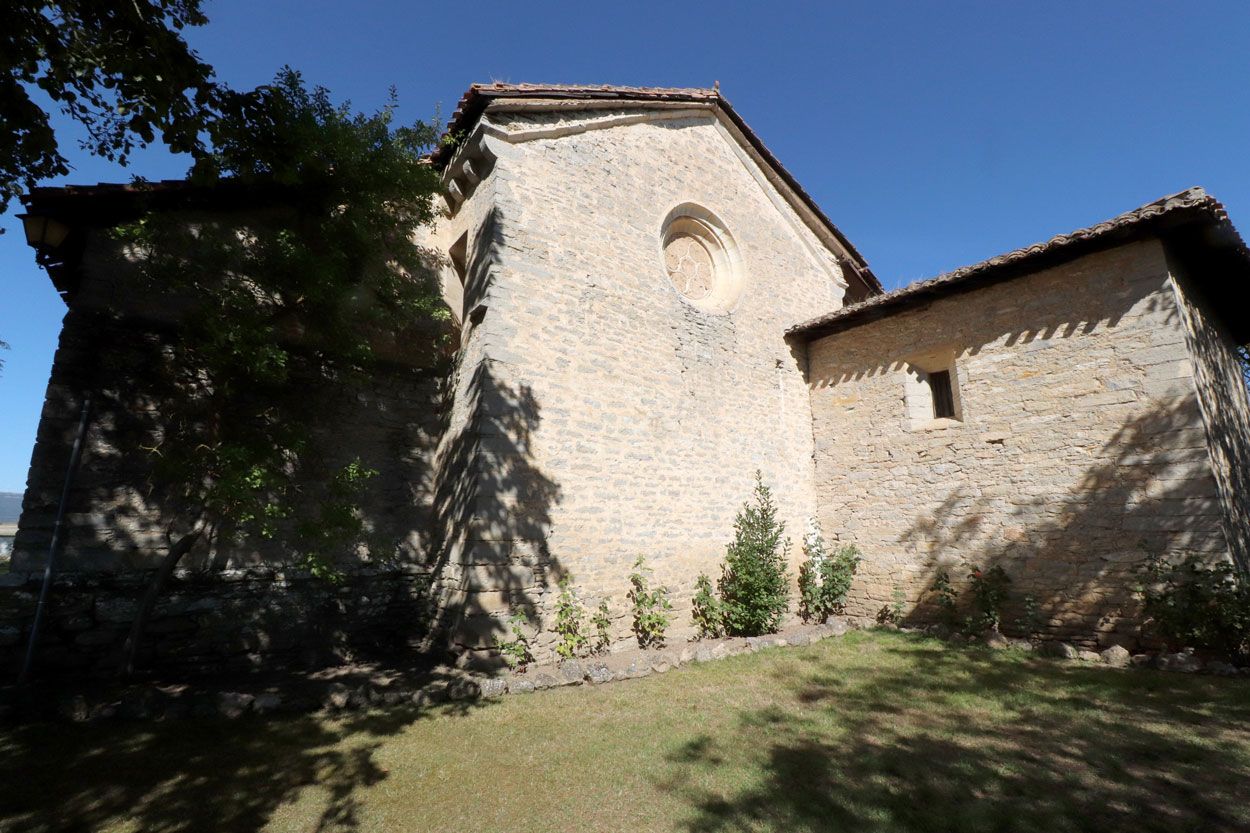 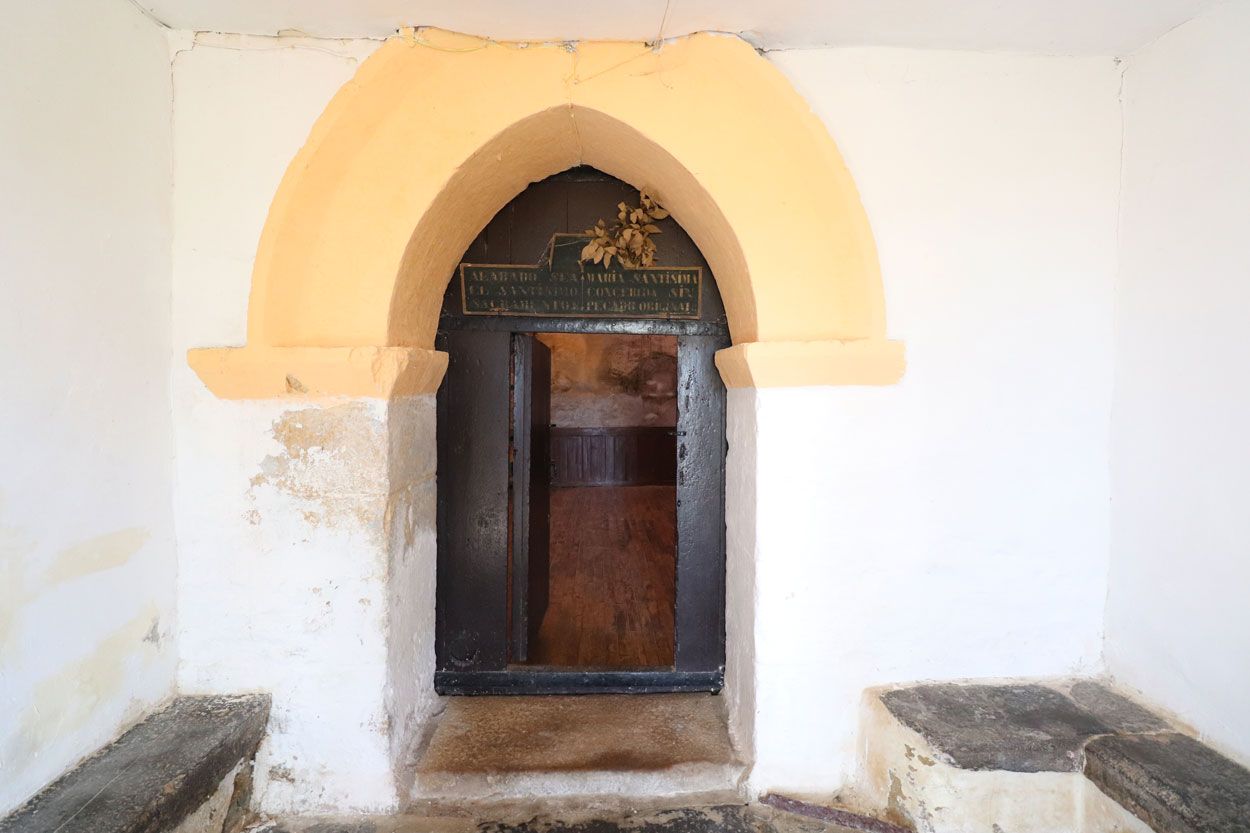 Inside, nowadays, the general poor condition of the building grabs our attention, due to problems caused by damp. The Romanesque baptismal font is located at the feet of the temple, with a smooth bowl held by four columns. In that area, we can see the scraping of the walls, a work that started to be carried out a few decades ago, until it was stopped when they realised that there were paintings of medieval origin throughout the church. Nowadays, the whitewash does not allow us to contemplate them in all their splendour, but a series of scrapings carried out throughout the temple in the 1990s allows us to guess some details and decorative motifs. 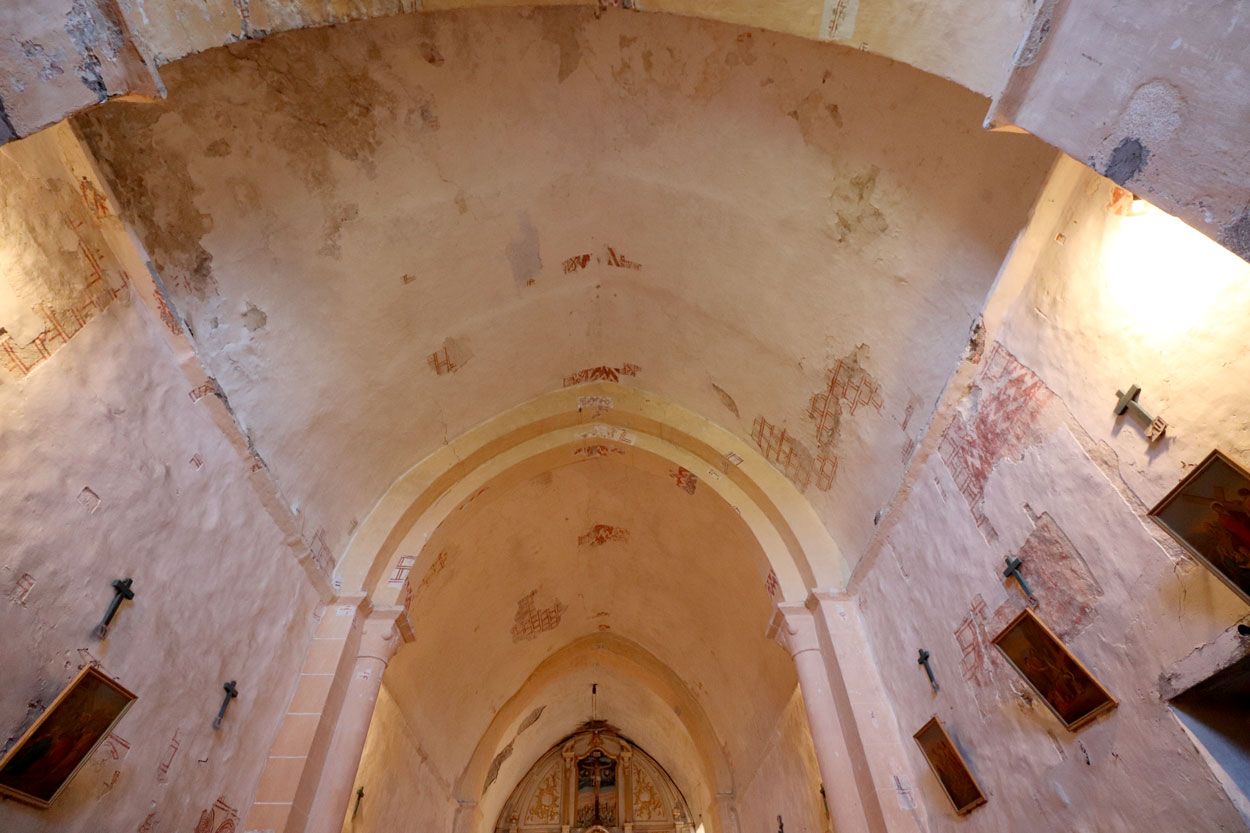 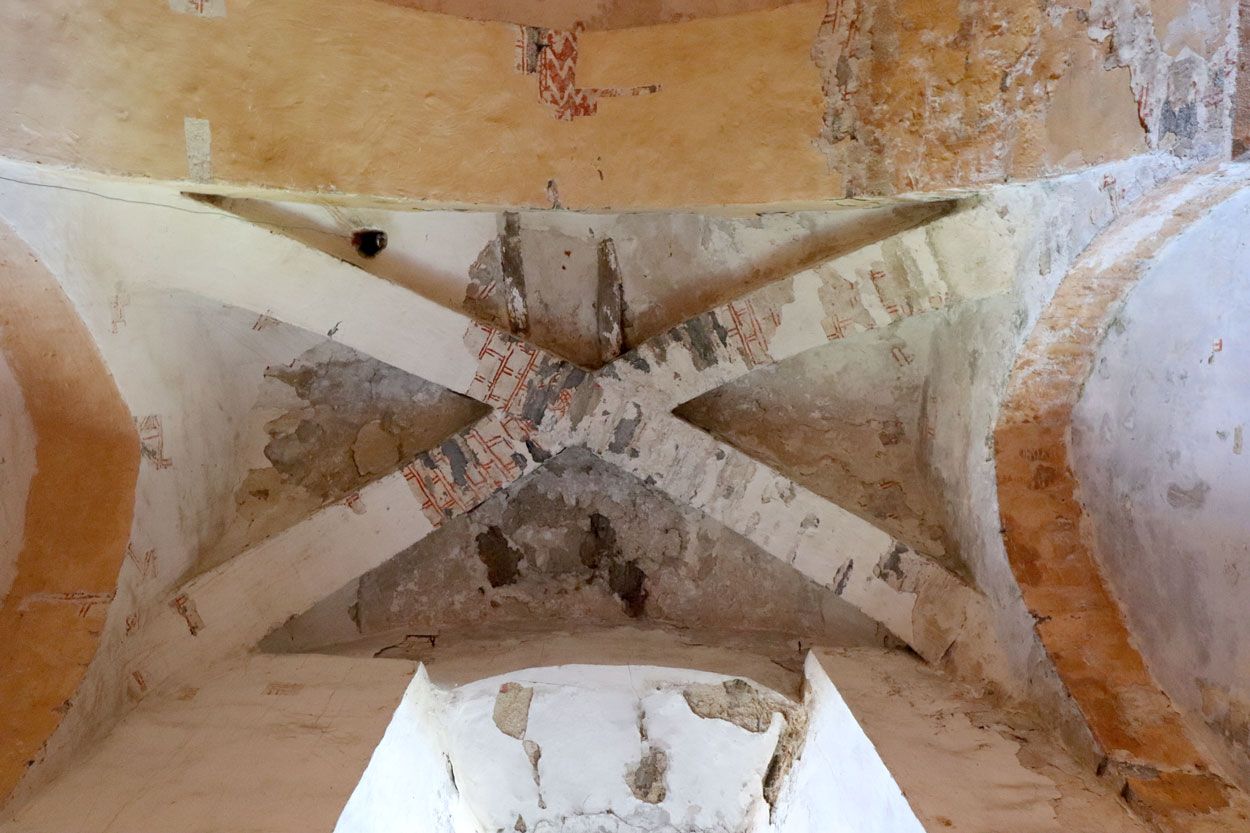 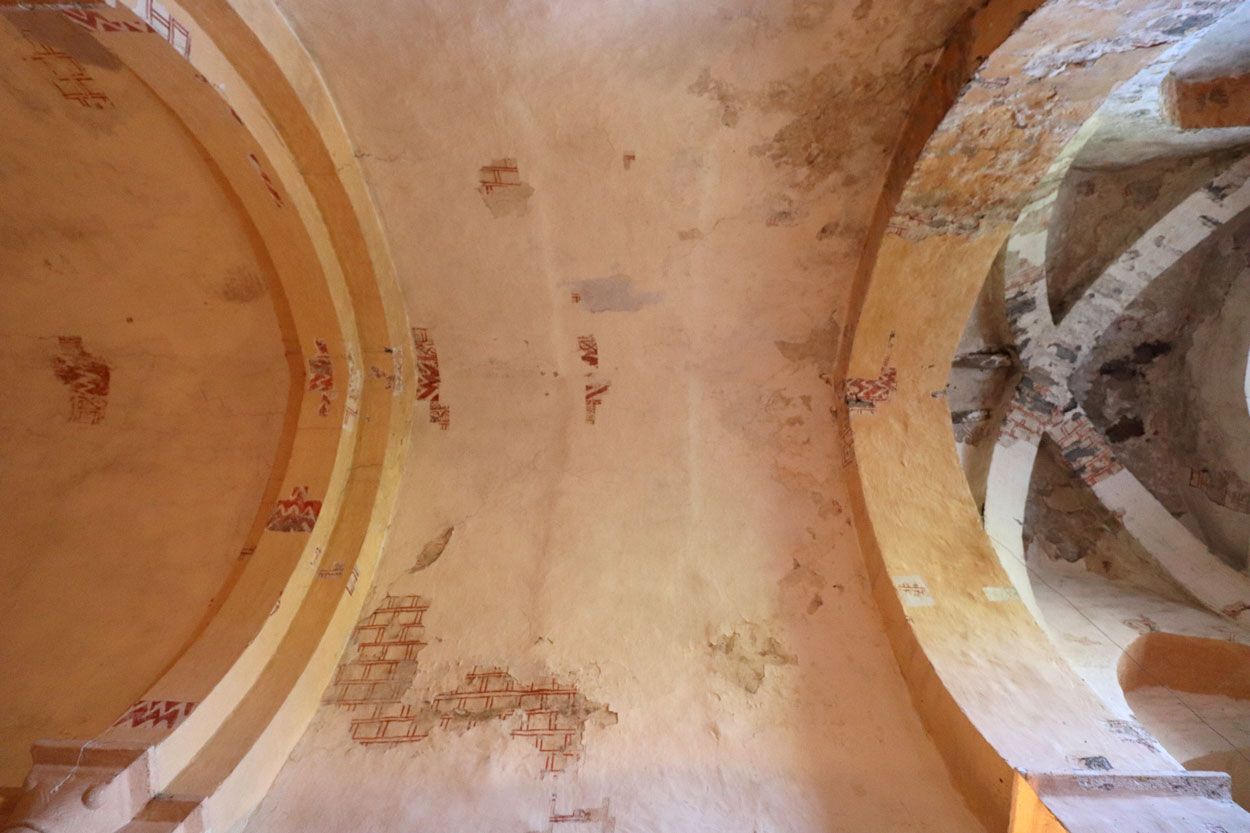 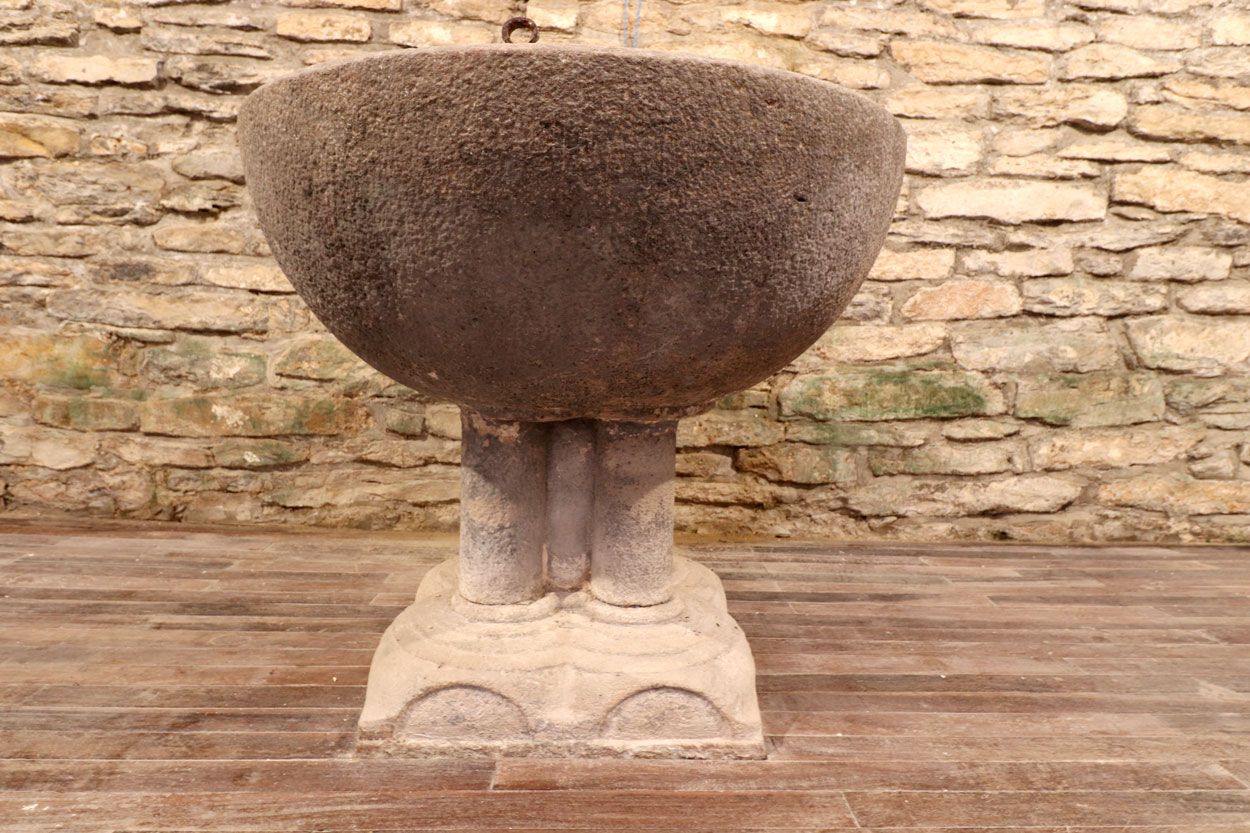 It is a type of simple mural painting, carried out in red iron oxide or red colour on the white of the whitewashed wall. This kind of pictorial covering had a considerable presence in Álava. On a base of red ashlar masonry, other decorative geometric motifs can be discerned, such as a frieze of zigzag lines that traverse the upper part of the pointed barrel vaults, the upper part of the cornices and other areas with interesting architectural elements. For example, we find it framing the area where the original Romanesque facade was, or the place where the credence table lied, currently covered up by cement. A curious line also stands out halfway up on the north wall, from which circular motifs appear, such as wheels and spirals. 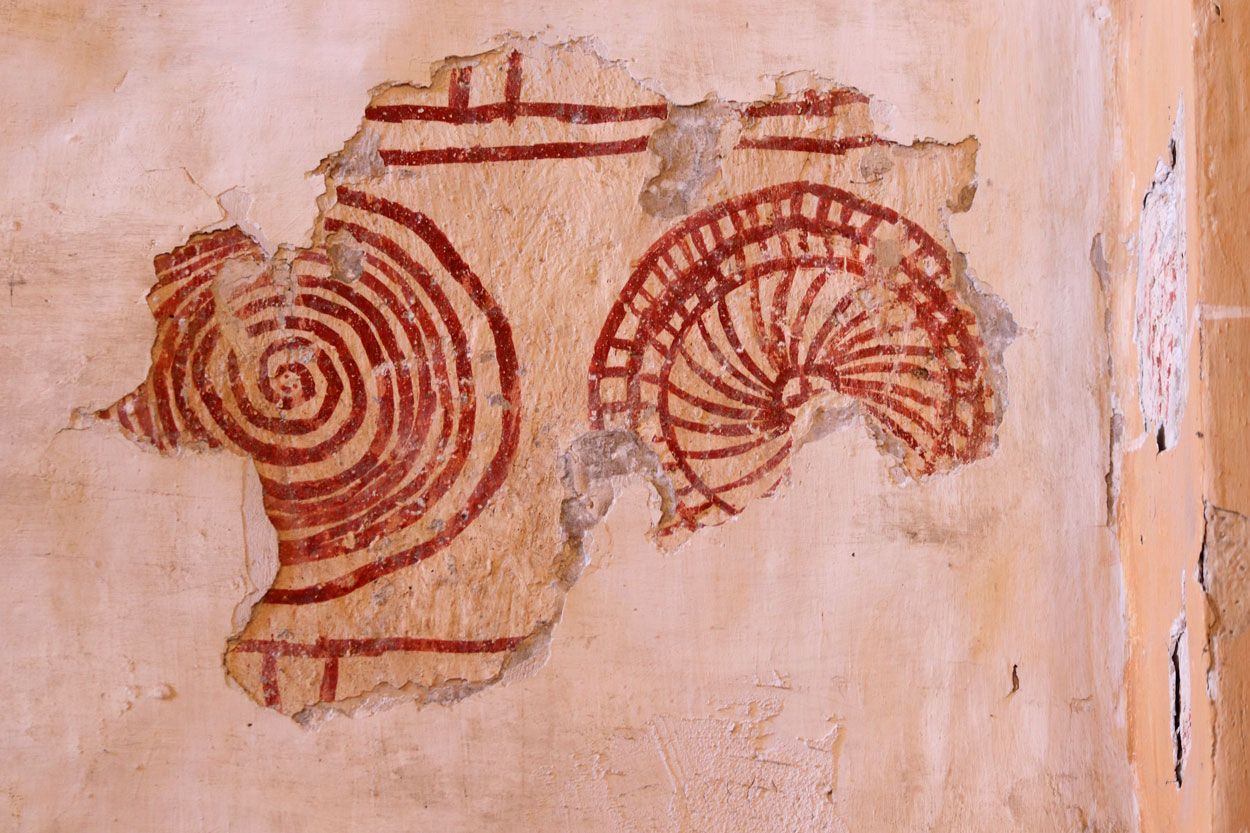 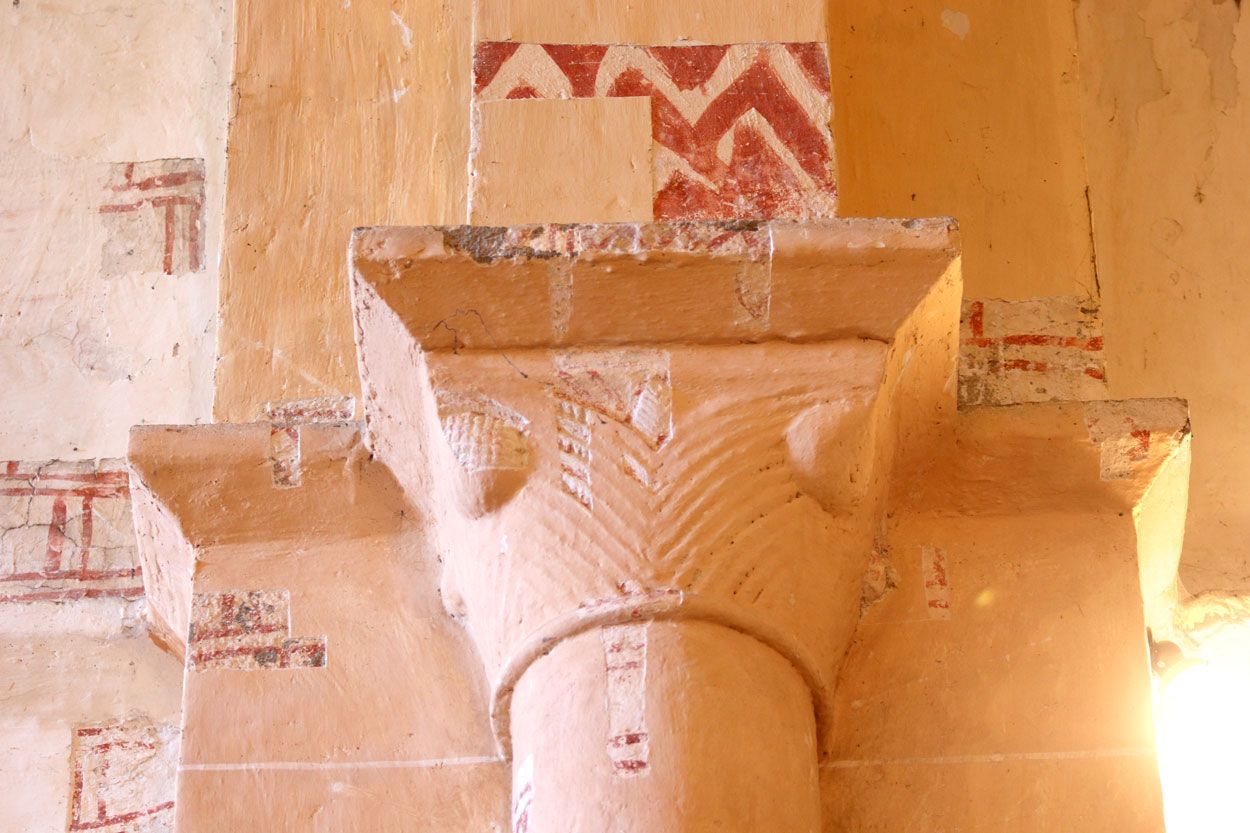 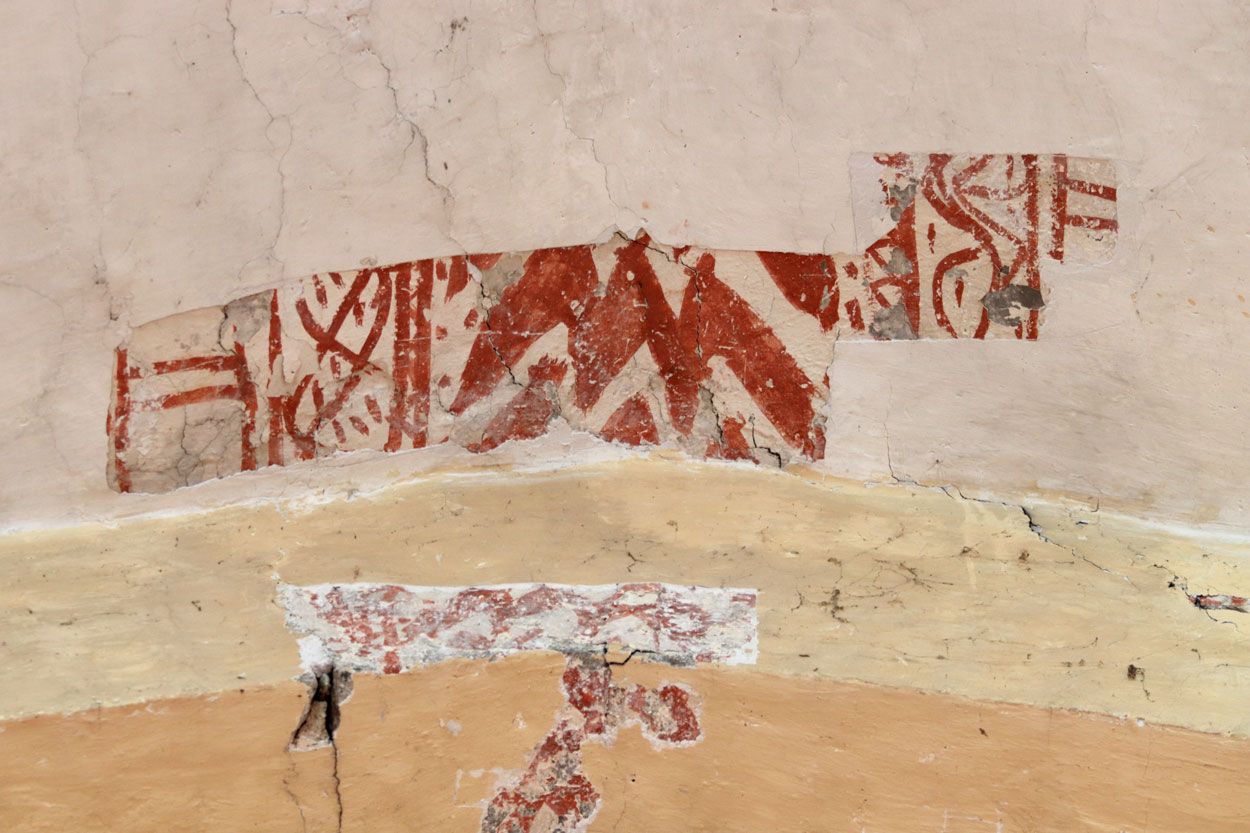 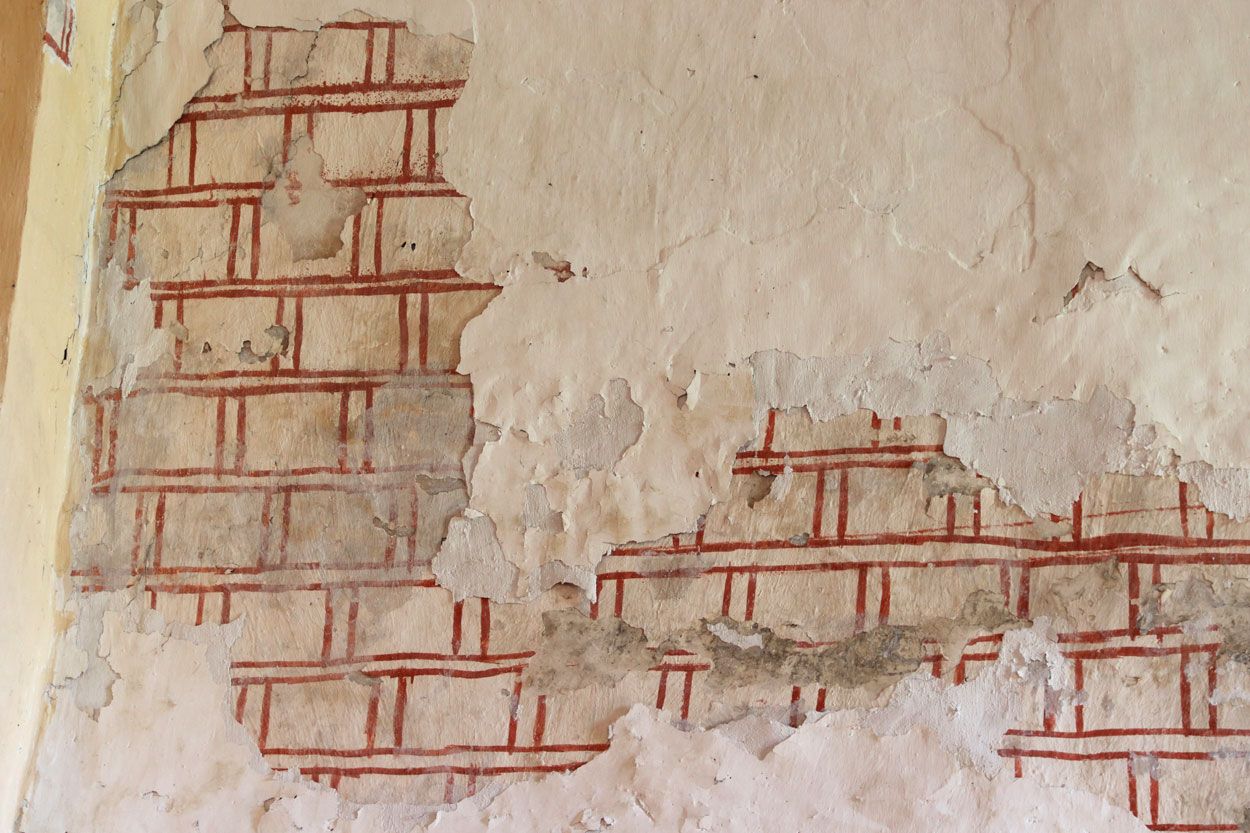 The original Romanesque east end was dismantled in the 15th century to carry out a Gothic extension. We can see how the pictorial style changes there. We still find masonry, but on this occasion it is made following the custom of the time, painting the background in grey (grisaille) and painting the separations of the false ashlars in white. Both styles, red and grey, coexisted until all the walls were whitewashed again centuries later. In the two side chapels, whose vaults have round arches, false vaults with Gothic style tiercerons were painted, which can be seen almost completely. 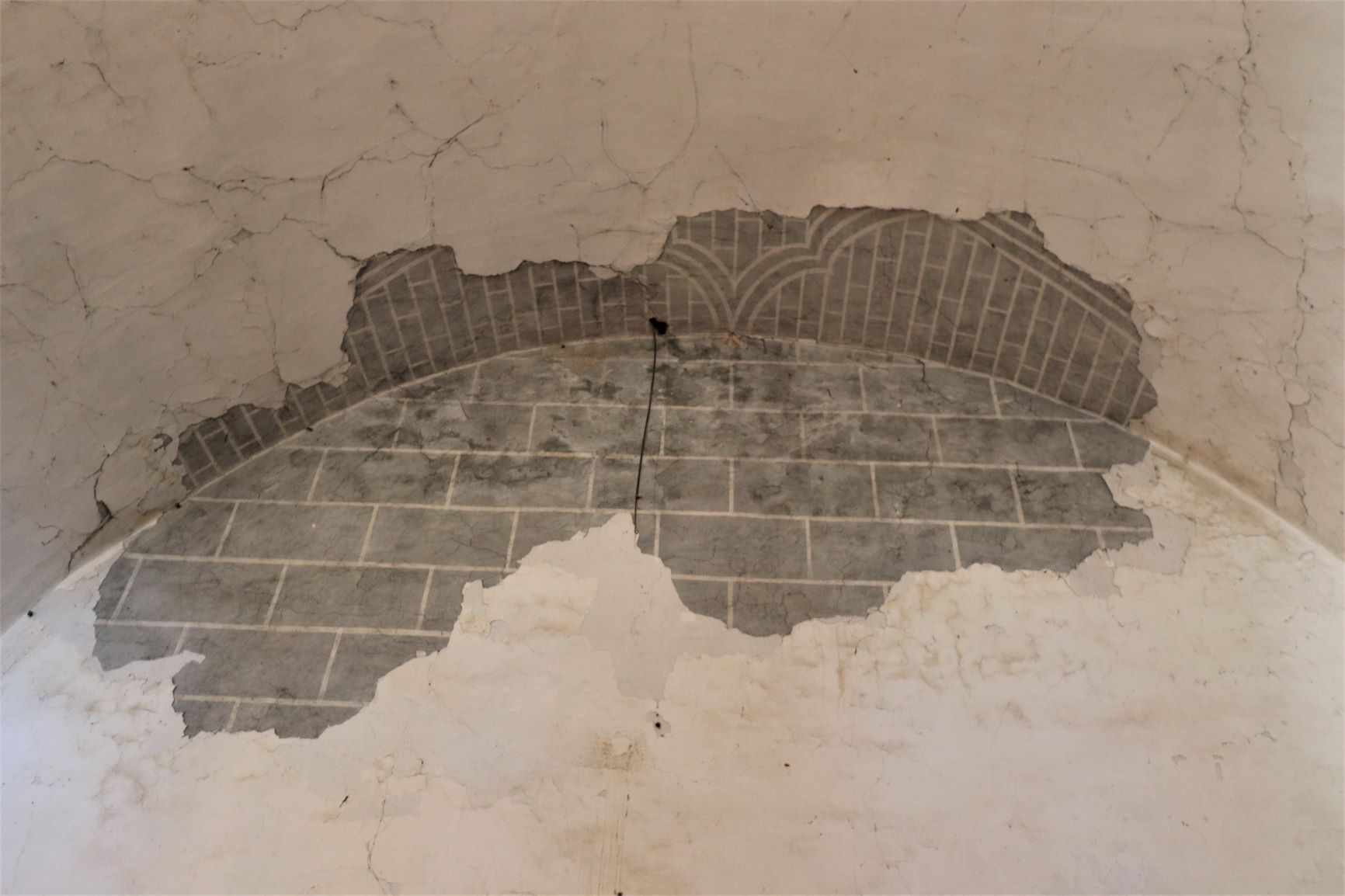 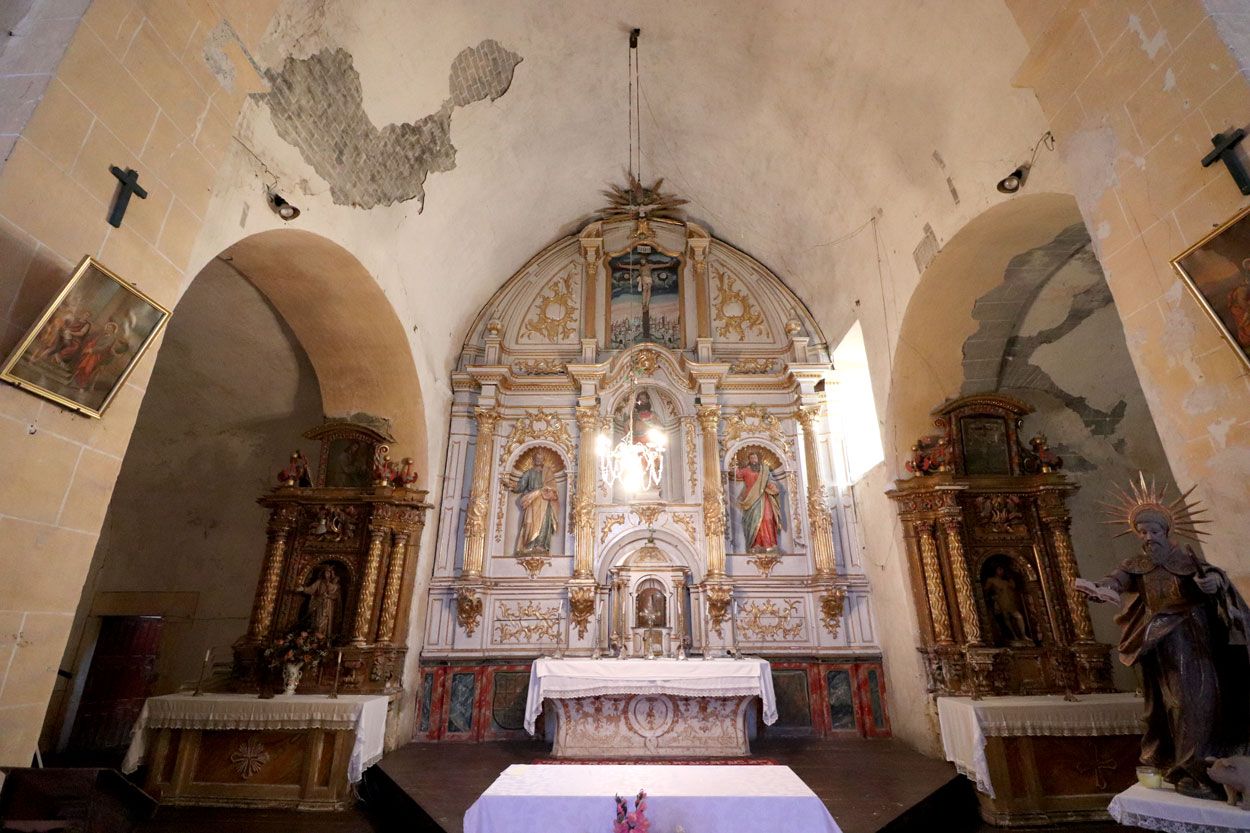 The same strategy of painted Gothic vaults, a bit more complex, was followed in the sacristy, where we also see a scraping on one of the walls that revealed part of a crucified Christ, also carried out in grisaille. This painting is partly hidden by a small baroque reredos with a city background that hosts a later Calvary. 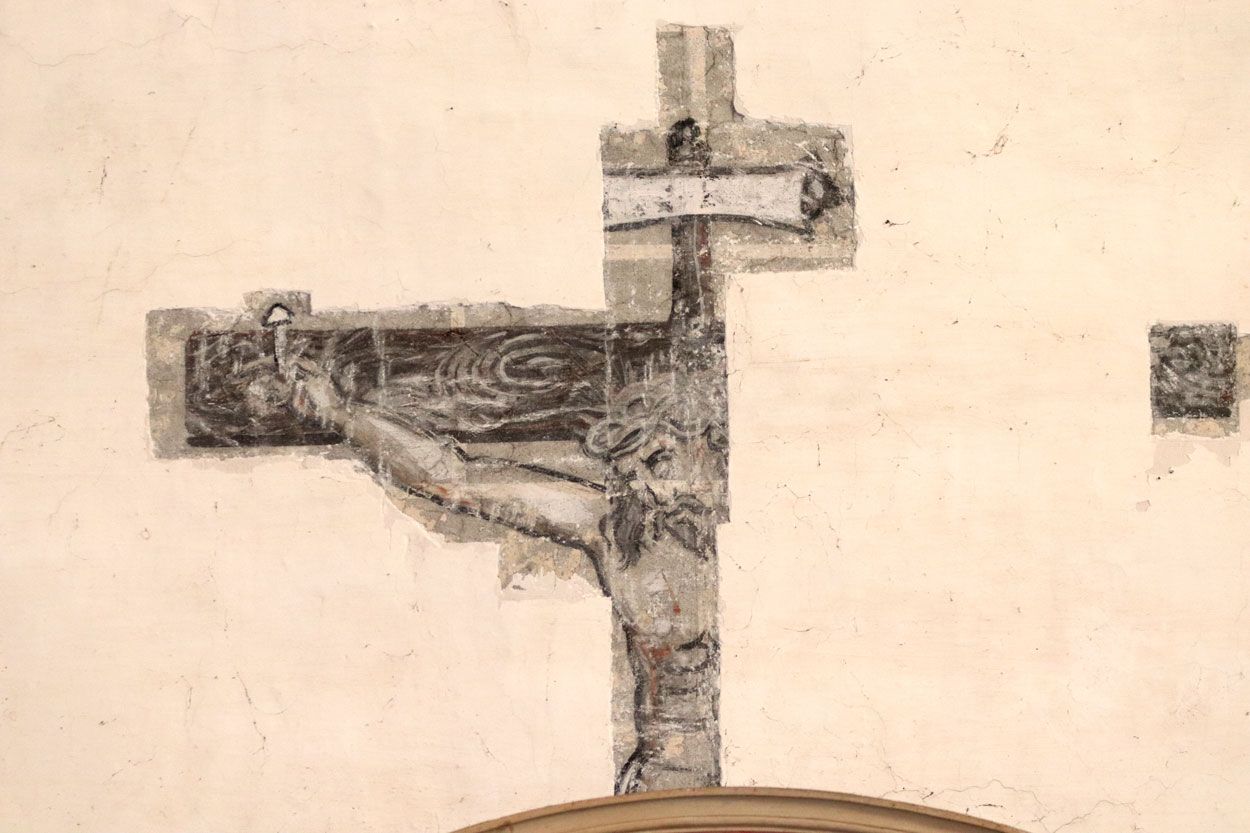 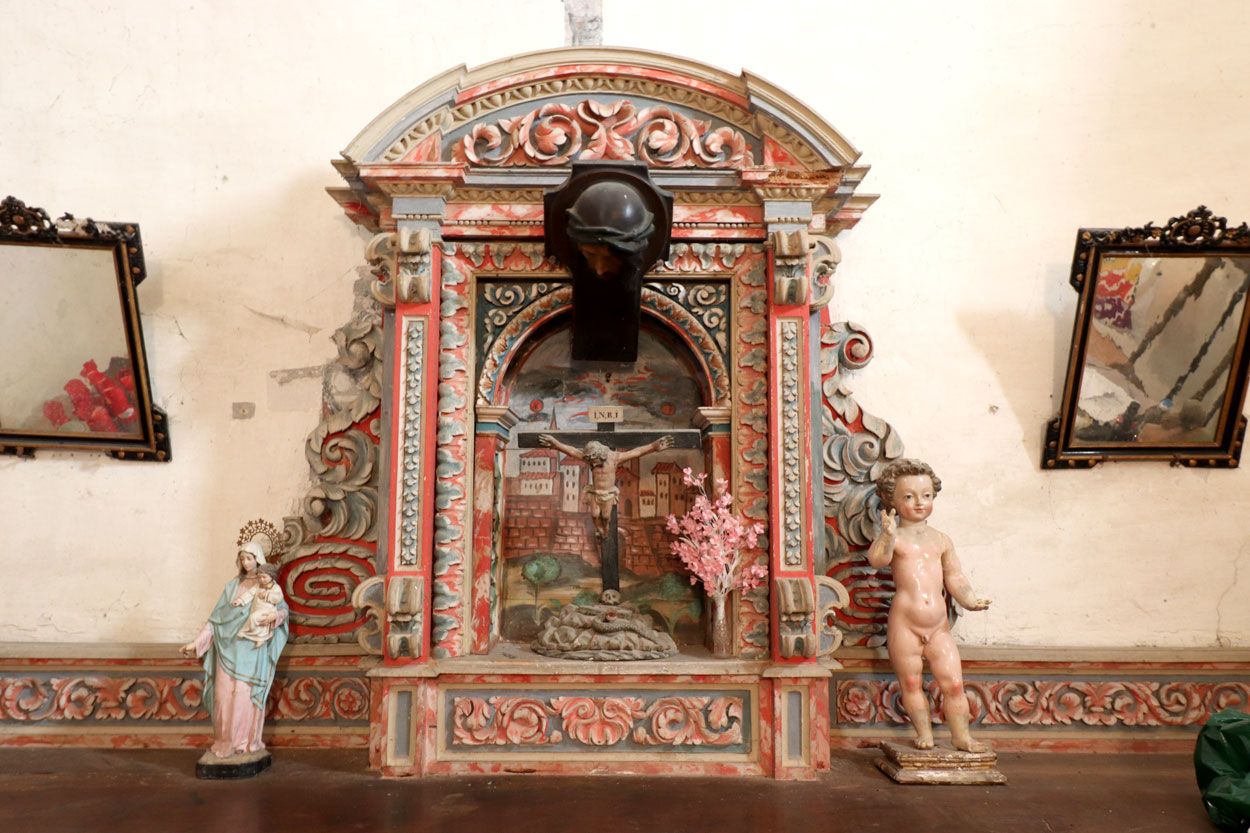 Much of the art furniture of the church has disappeared, such as the choir or the panels of the old Renaissance altarpiece. On the east end, however, the 18th-century altarpiece survives, carried out in rococo style and painted in white and golden. There we can see the figures of Saint Andrew, patron of the temple, surrounded by Saint Peter and Saint Paul. At the top, the Calvary with the Holy Spirit stands out. 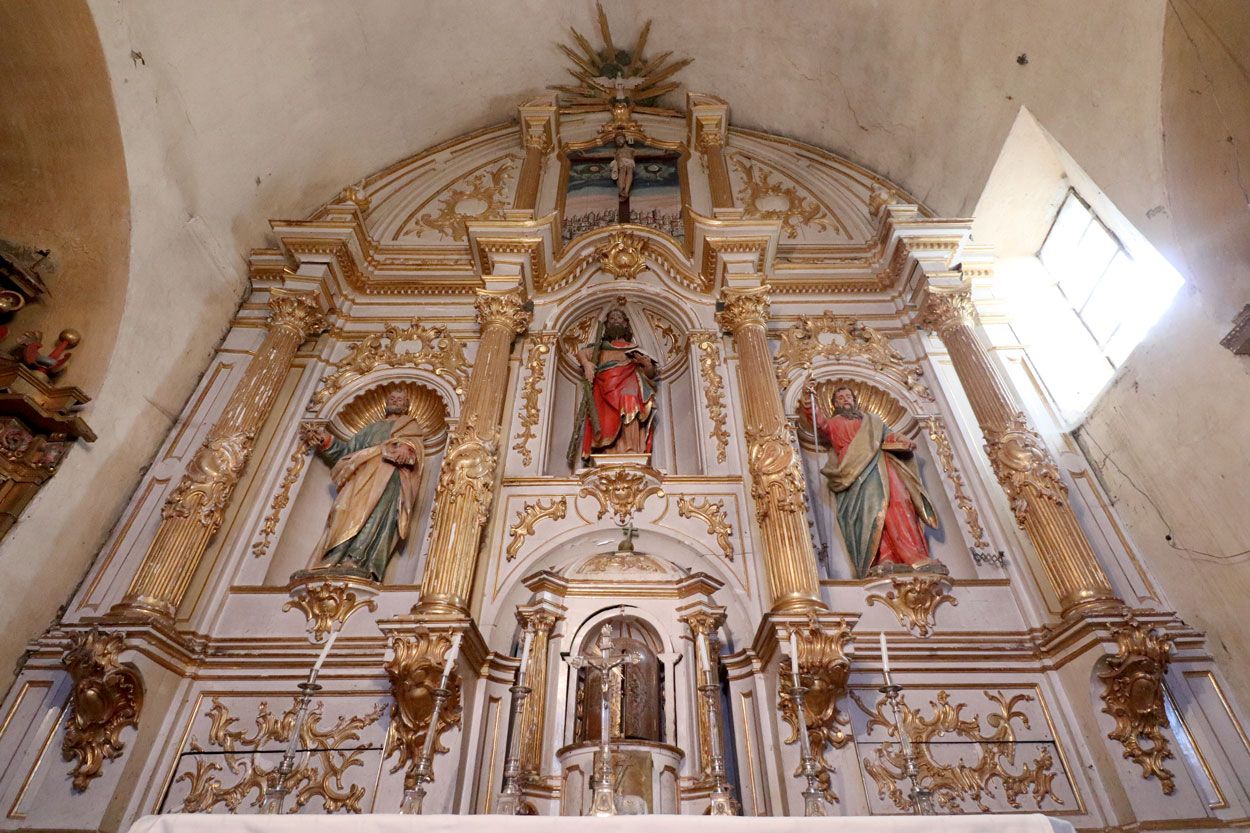 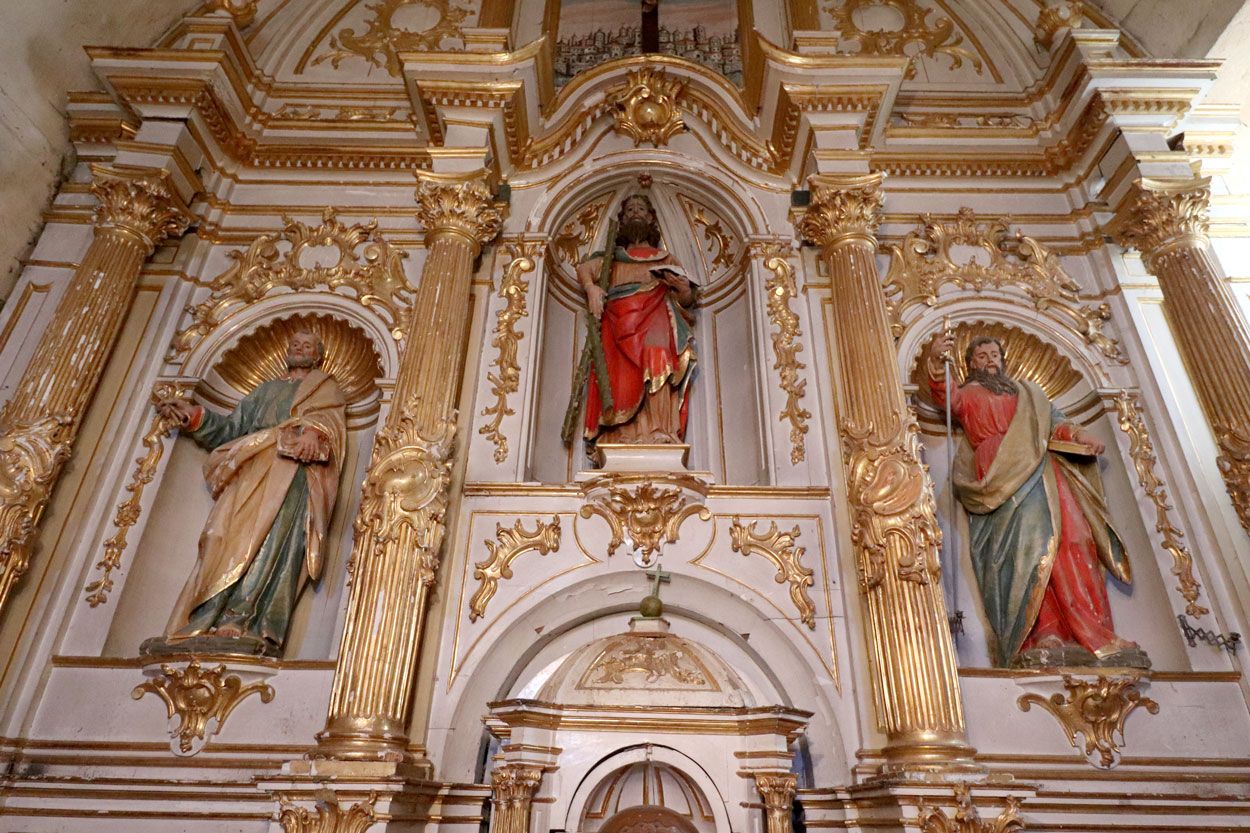 There are also two previous side reredoses, dating from the 17th century, dedicated to Our Lady of the Rosary and Saint Sebastian. At the top of both there are small painted panels, in which a Christ bearing the cross and a Calvary are respectively represented.

In addition to the altarpieces, we find two free-standing figures of Saint Anthony, one of them Gothic and the other one baroque. Almost certainly, they come from the hermitage of the same name that is still preserved in the town. 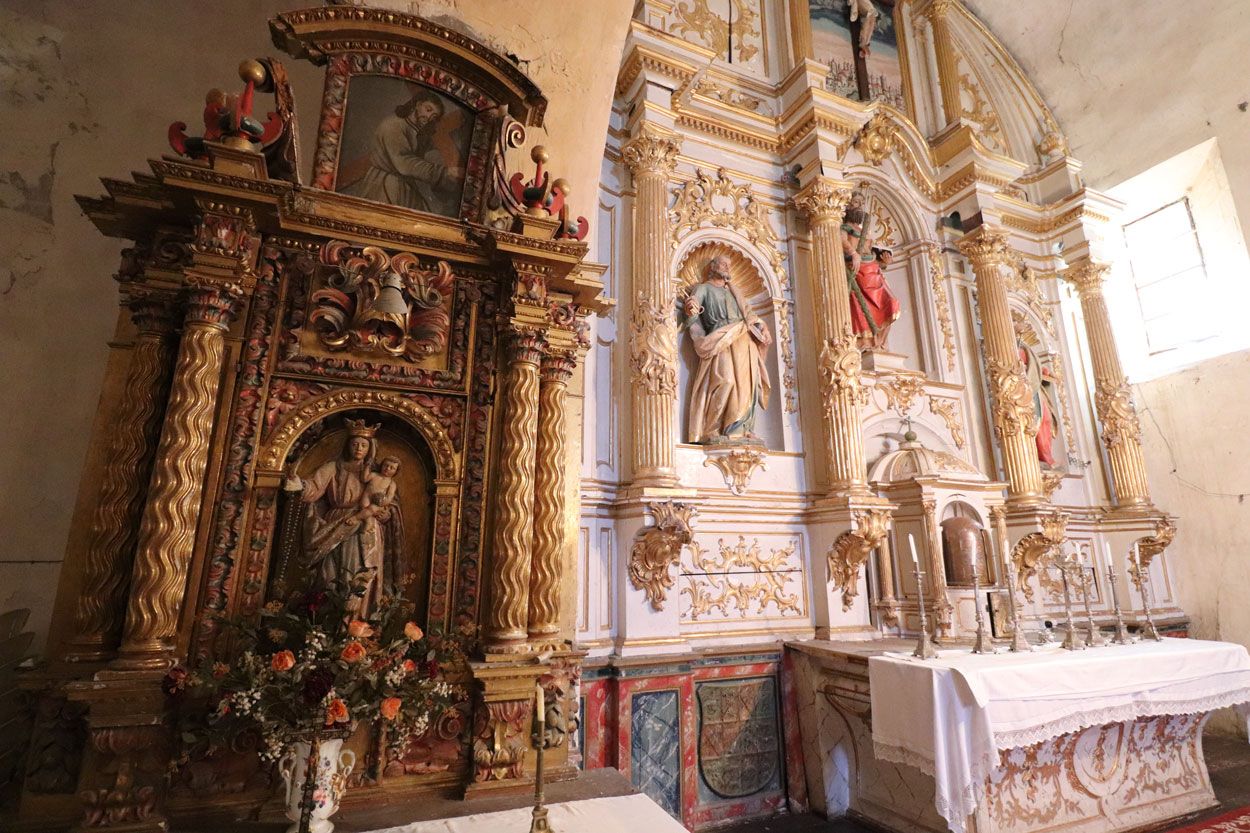 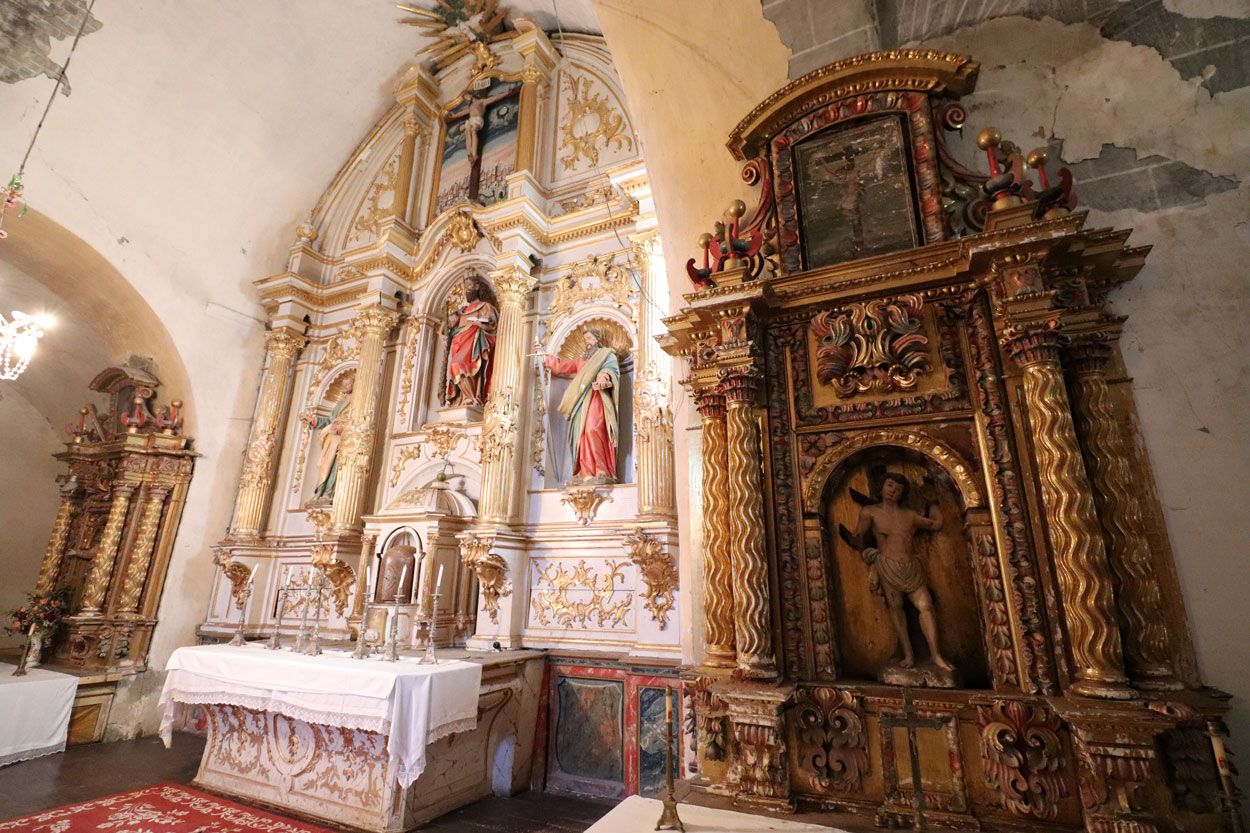