The town of Hueto Abajo appears cited in the well-known document Reja de San Millán (1025) paying three rejas (tithes) together with the neighbouring town of Hueto Arriba, which indicates that we are facing a town of remarkable importance since its most distant origins. Later, the town changed hands until Alfonso XI granted Los Huetos to the Hurtado de Mendoza family, so that they could establish their manor there. The power of this lineage was materialized in the area with the presence of five towers, of which only those of Mendoza and Mártioda survive today, although they had another one in the area of Los Huetos.

The photographs taken by Gerardo López de Guereñu in the 1940s and 1950s show us a building that essentially maintains the appearance of the current temple. However, as it was usual on this kind of constructions, it was surrounded with a series of attached rooms that hid some of the parts that can be seen today. For example, the parish house was removed to only leave the lower floor converted into a portico. On these interventions, the facade was also brought to light, which remained hidden and was difficult to see behind the walls of the old sacristy of the chapel of Saint Blaise. The restoration and refurbishment of the temple, besides, allowed us to discern several phases of construction of the building. The west wall was the oldest, which must have belonged to a previous Pre-Romanesque church. 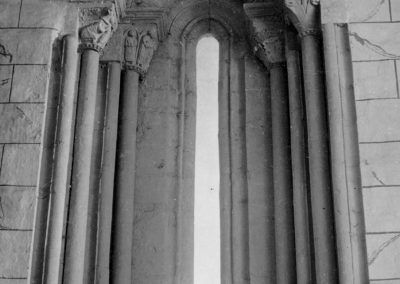 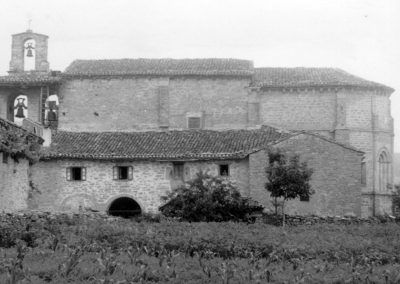 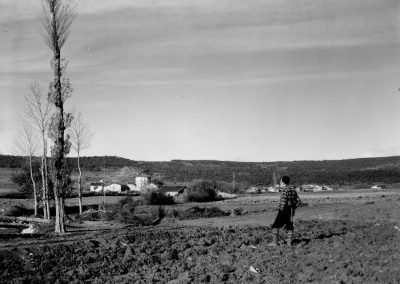 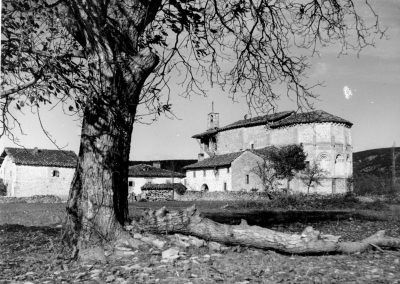 The altarpiece of Saint Blaise

One of the great jewels of this church is located in the chapel of Saint Blaise. There, we find the fabulous altarpiece of Saint Blaise, made up of eight boards under baldachins and rich golden traceries. An inscription informs us of the date of creation (1526) and of the principals: Fortún Ortiz and his nephew Martín, both parish priests of the church. In the centre, there is a carving of the subsequent titular saint of relative quality, but the real interest lies in the painted boards. Surrounding the sculpture of the saint, we find two scenes that describe his life: his imprisonment and his martyrdom. On these panels some scenes of talking saints stand out, among which we find Saint John the Baptist and Saint John the Evangelist on the left, and Saint Lawrence and Saint Catherine on the right. At the top, a dynamic Descent is represented with a Flemish landscape in the background. On the lower part, we can see a Christ between two weeping angels, completing this predella with the figures of Saint Peter, Saint Paul, Saint Andrew, Saint Philip, Saint James the Less and Saint Bartholomew. This masterly sample of Renaissance painting combines all kinds of influences present at the early 16th century in Álava. We can see features of the Hispanic, Flemish and Italian painting in equal parts, showing us the melting pot and the cultural exchange that was going on at that time. 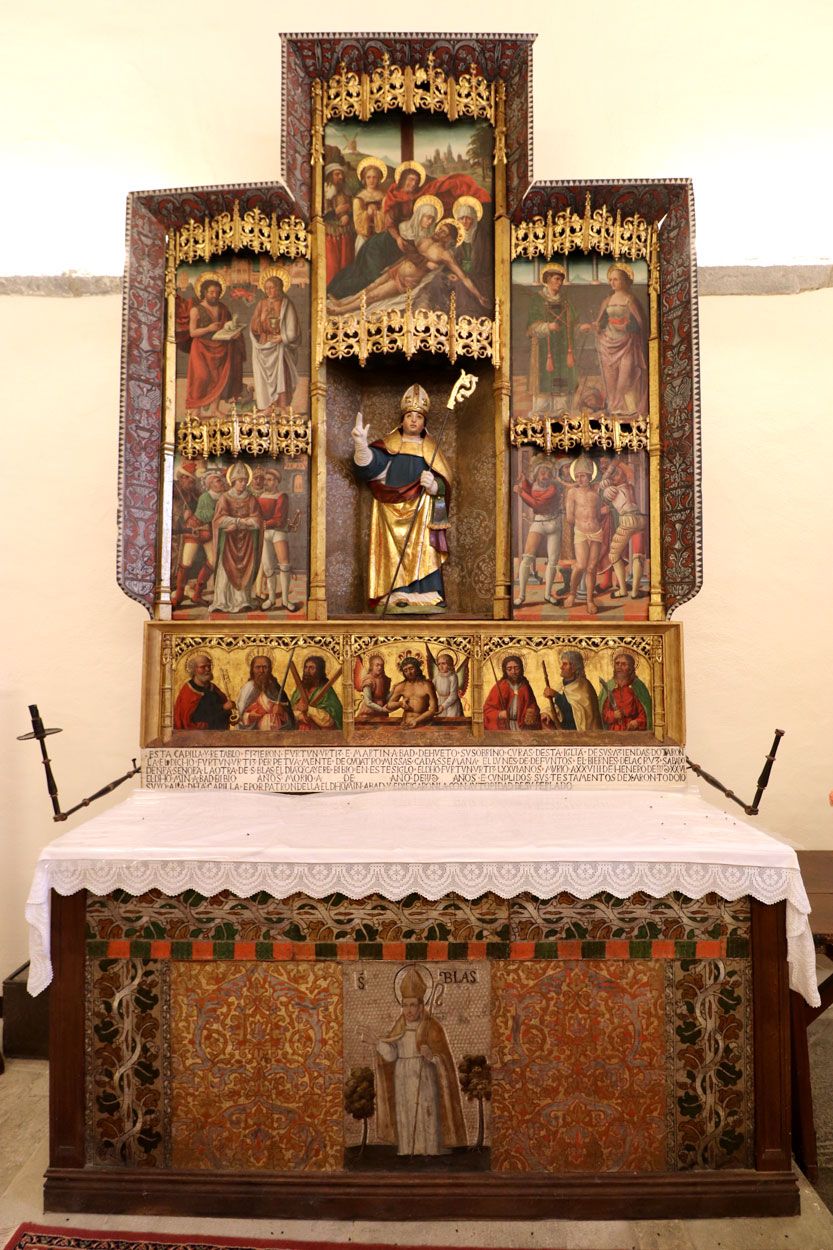 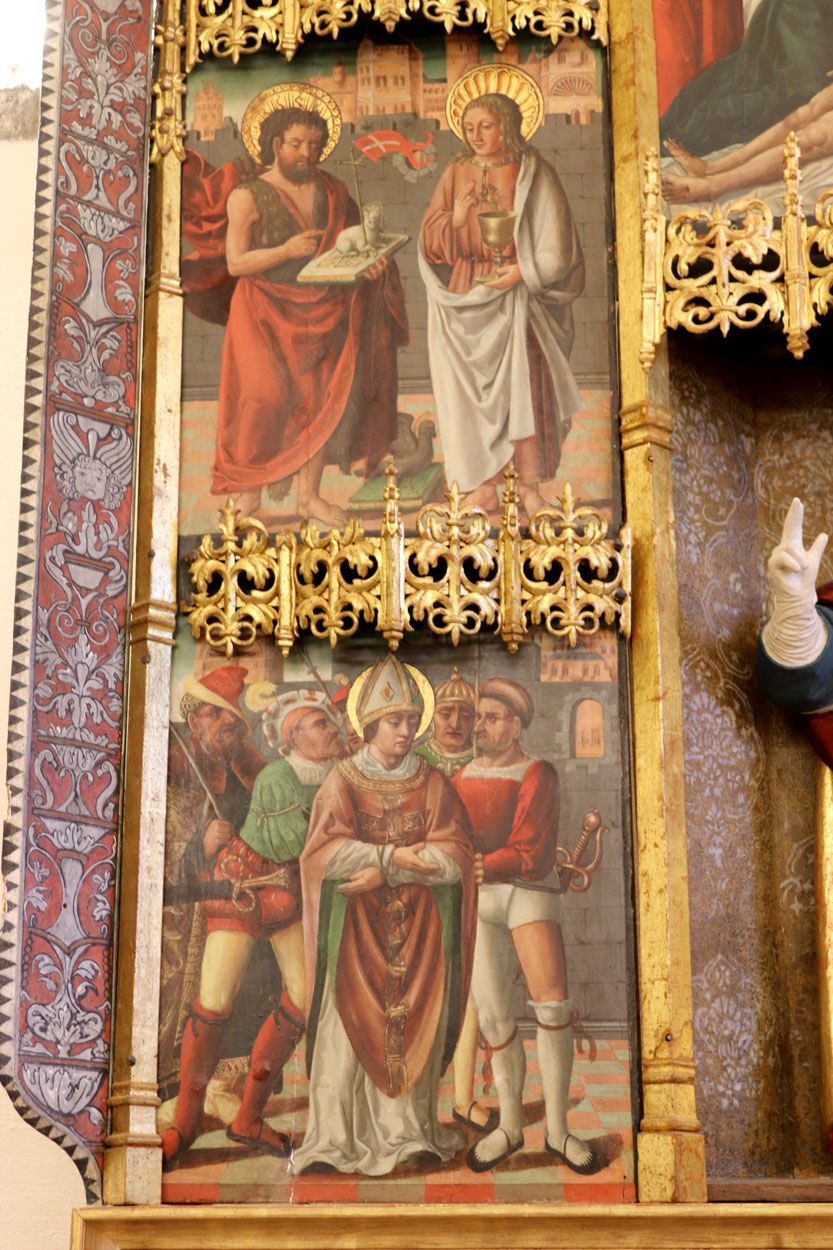 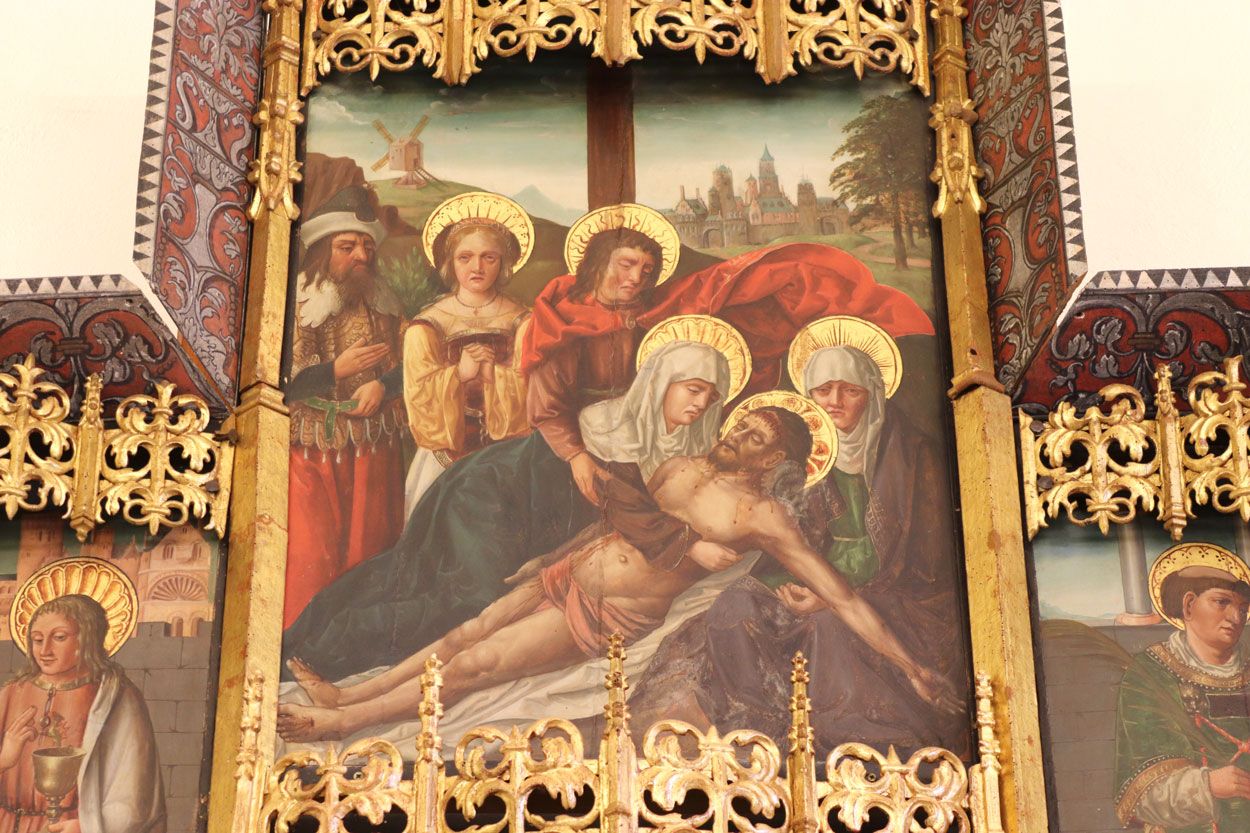 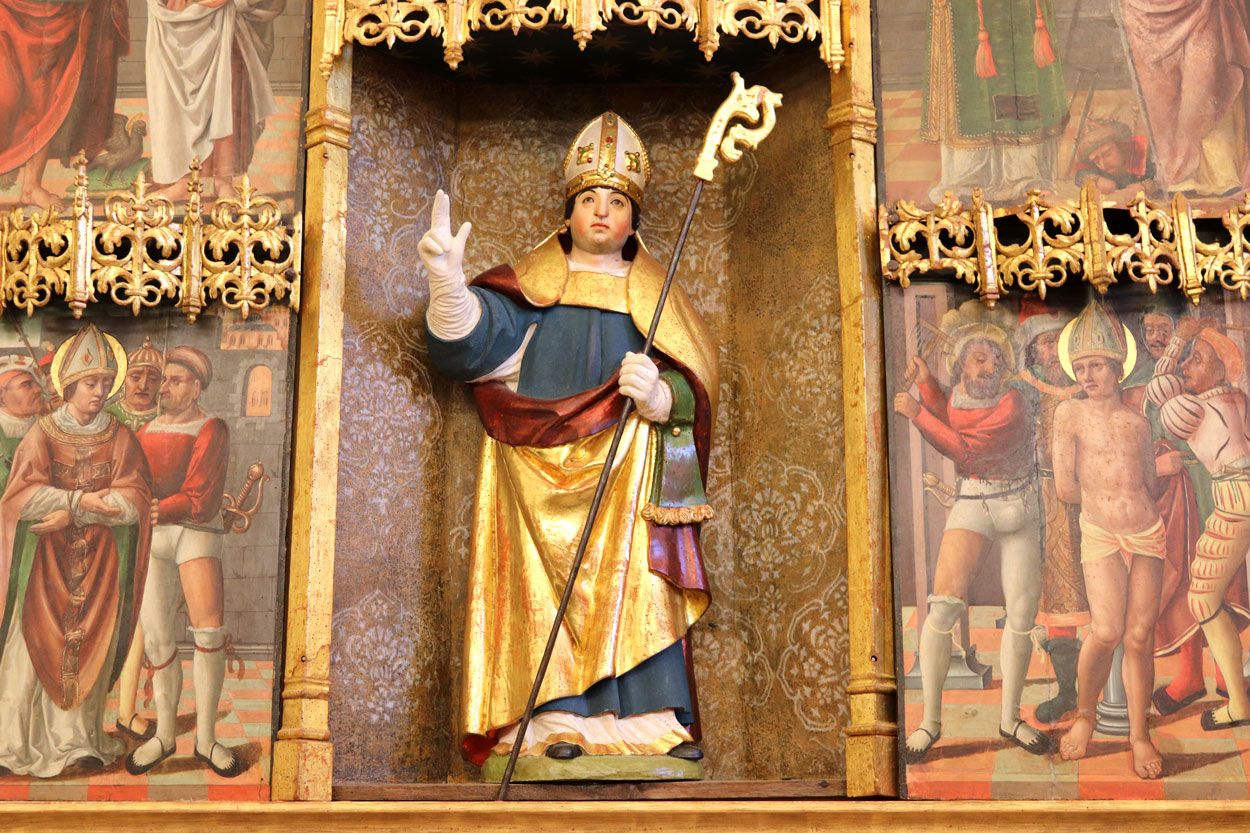 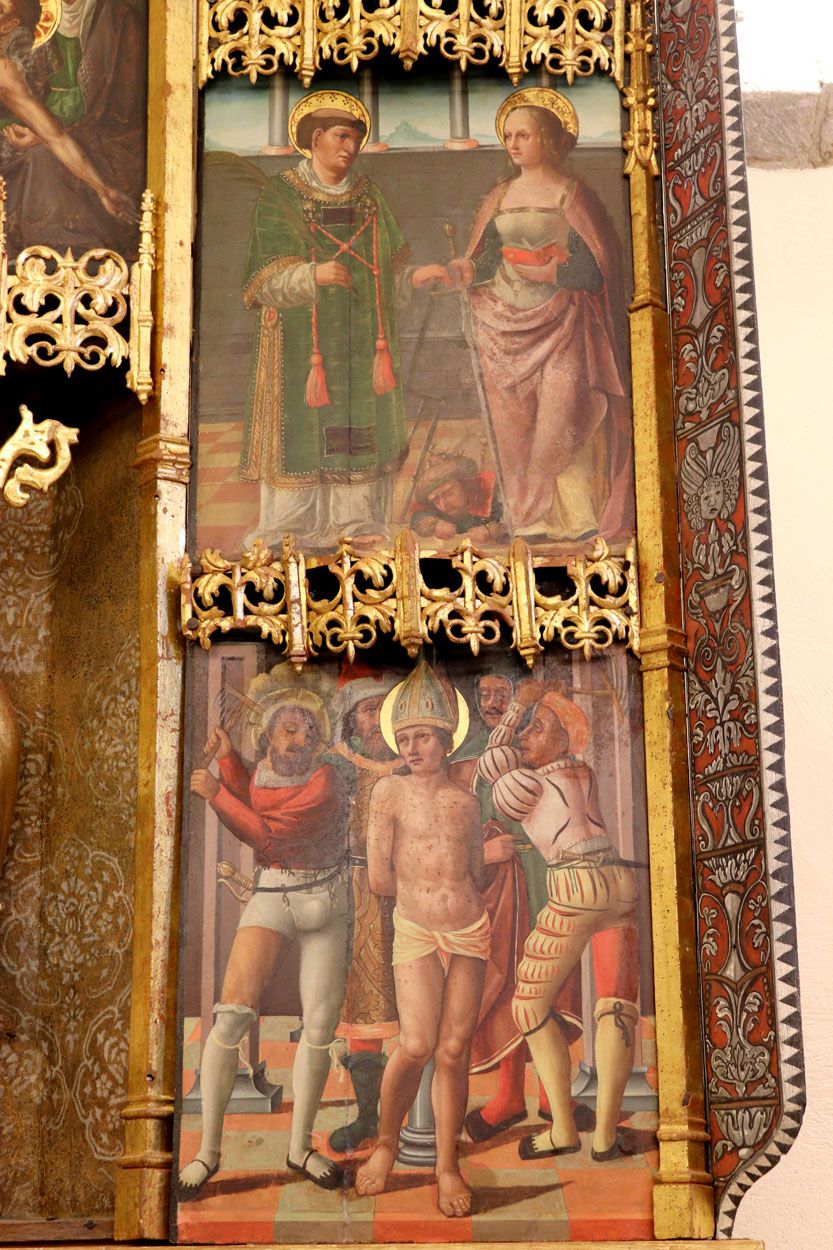 The church of Saint Vincent

The forms of the Romanesque in Álava are varied and original, creating a huge number of typologies and solutions. The case of Hueto Abajo perfectly exemplifies this spirit, as it presents one of the few polygonal east ends in the province with a surprising combination of materials: plinth and upper wall of masonry and ashlar windows. The constructive ambition of the apse confronts us with a work of an advanced chronology (late 12th or early 13th century), in which the workshops were already highly specialised. In this apse, there are three large windows, richly decorated with a very varied flora. On the discharging arch, we also see the usual checkered decoration that was so successful in the late Romanesque temples of Álava. 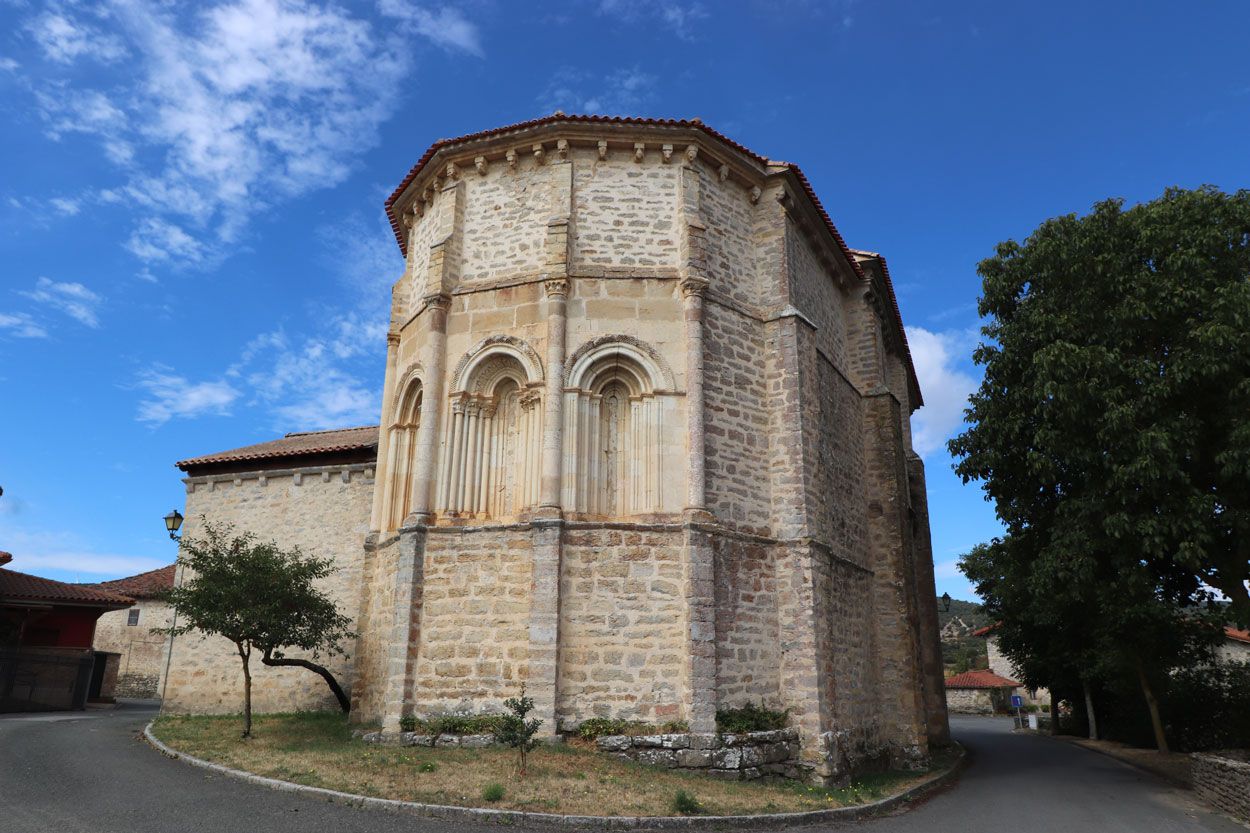 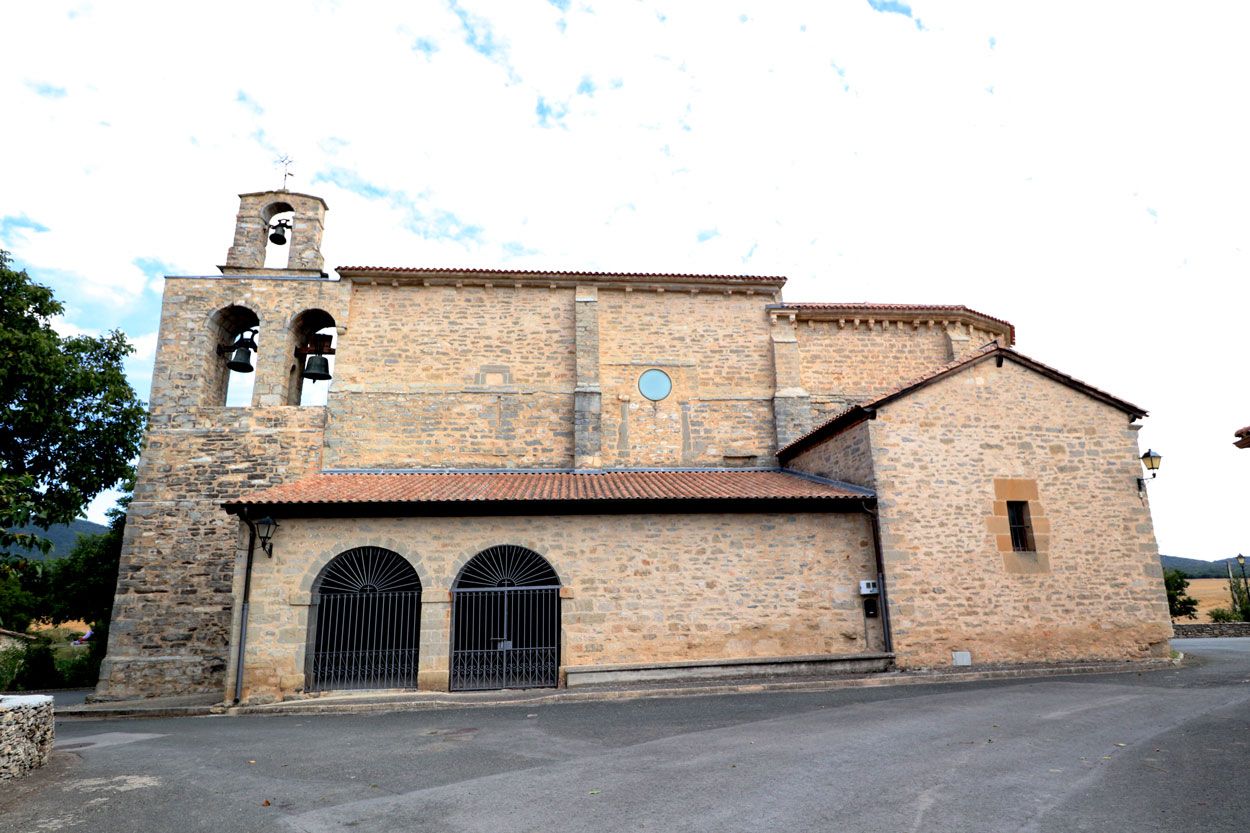 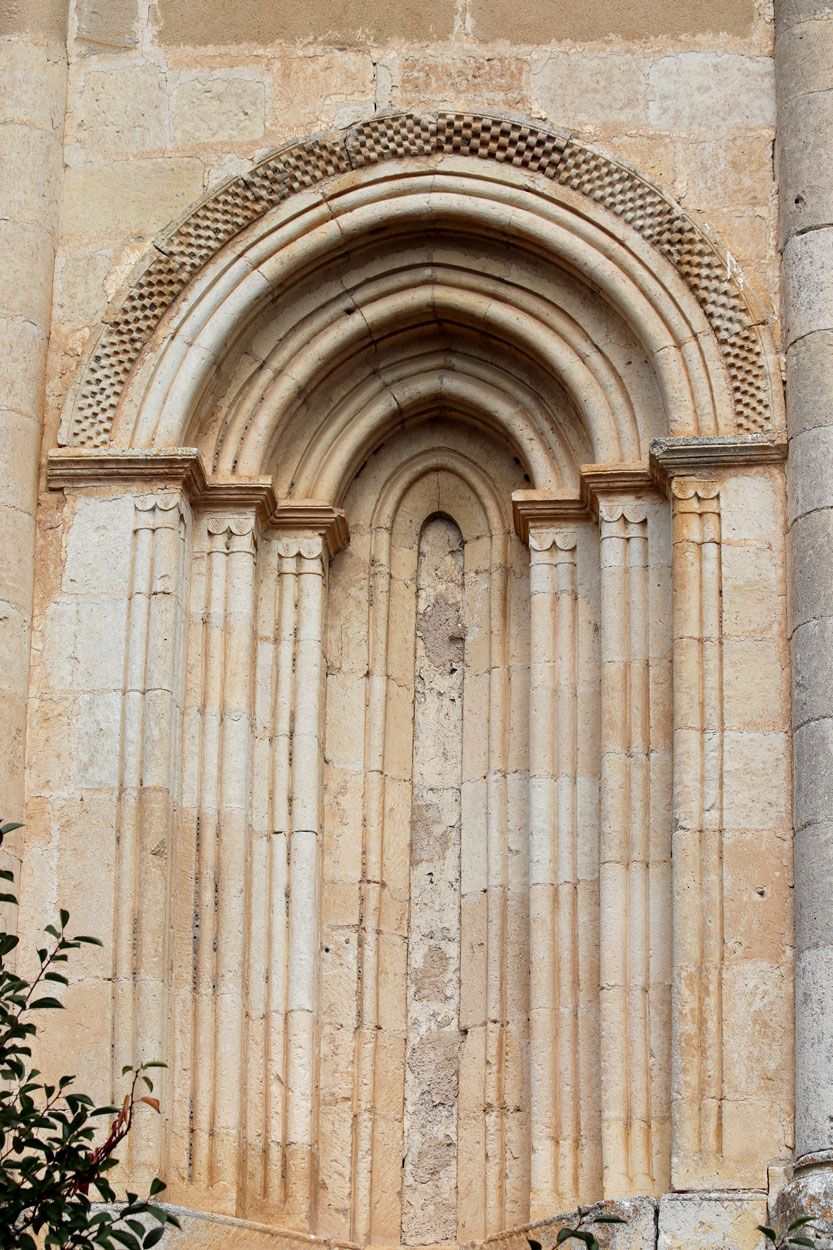 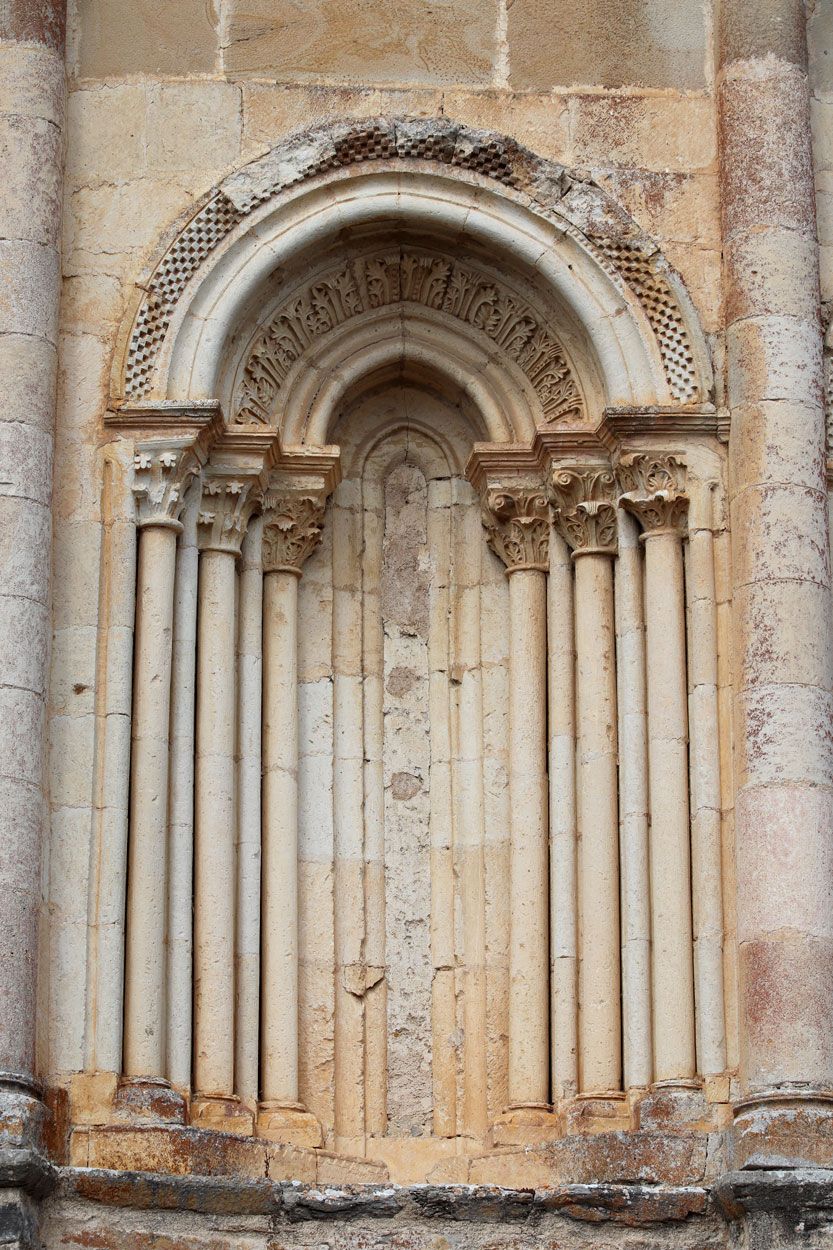 Holding the eaves, we see one of the most remarkable corbel collections in the province. Besides, some of them preserve remains of polychromy. If we move from north to south, we can see male faces, felines, well-dressed men, women with headdresses of the time, boxers fighting, an eagle with its prey, monstrous creatures, an imposing mouth of hell, a possible Janus with two faces and even a male exhibitionist. But perhaps one of the most interesting ones is the one that shows the image of lust with a naked woman from whose breasts a toad and a snake are hanging. 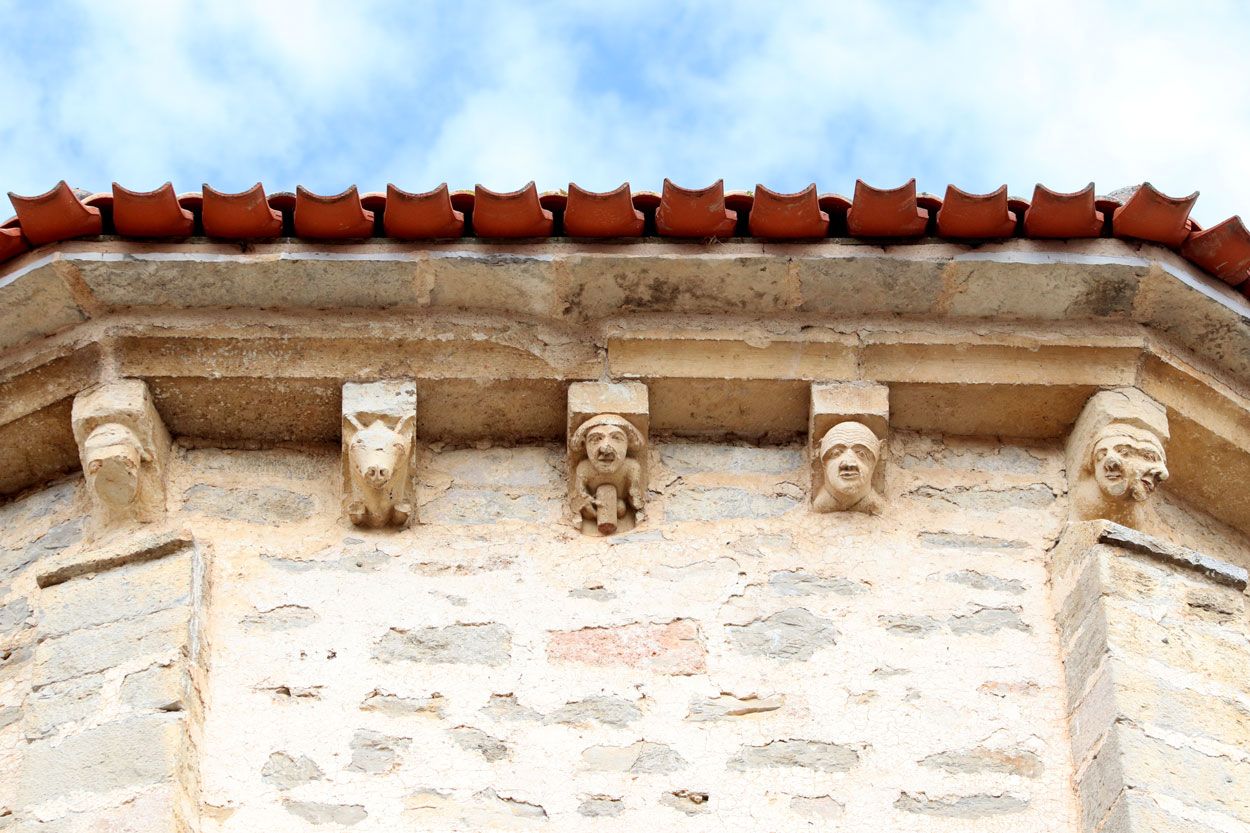 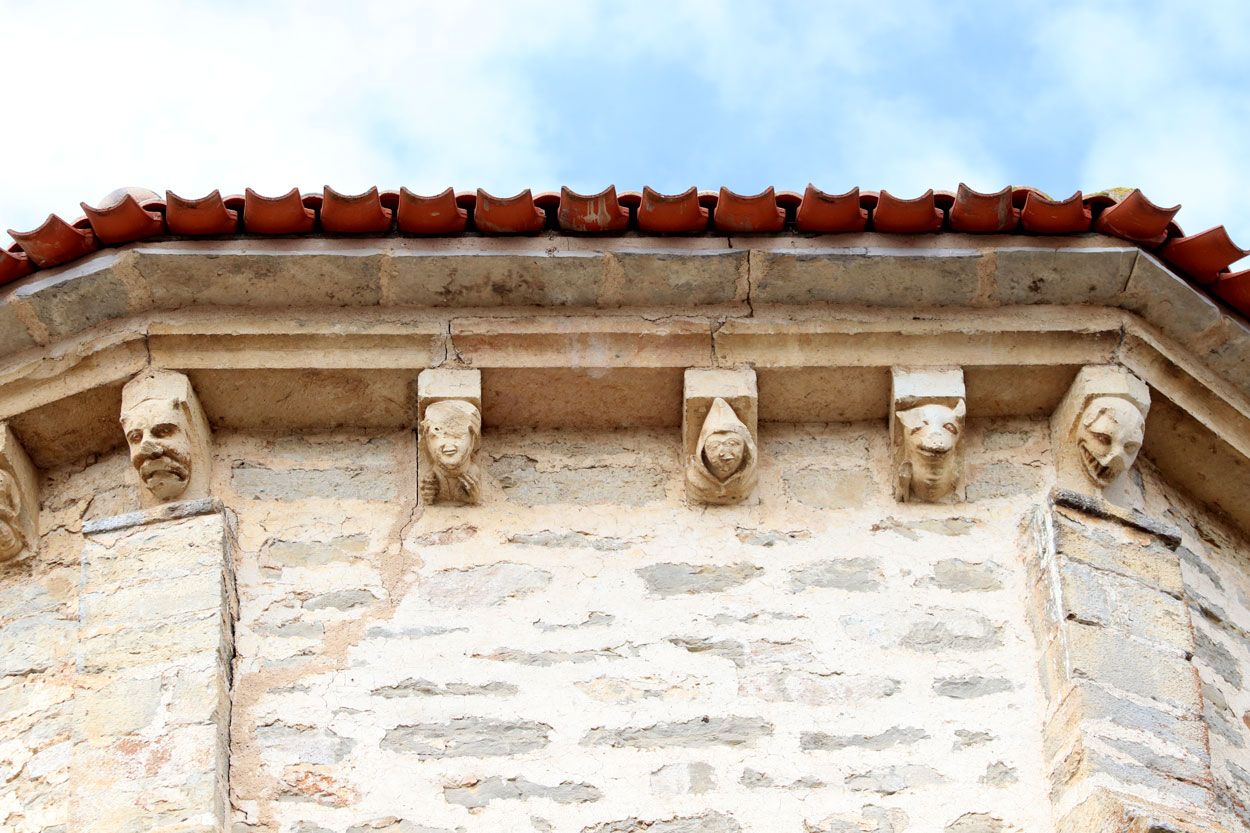 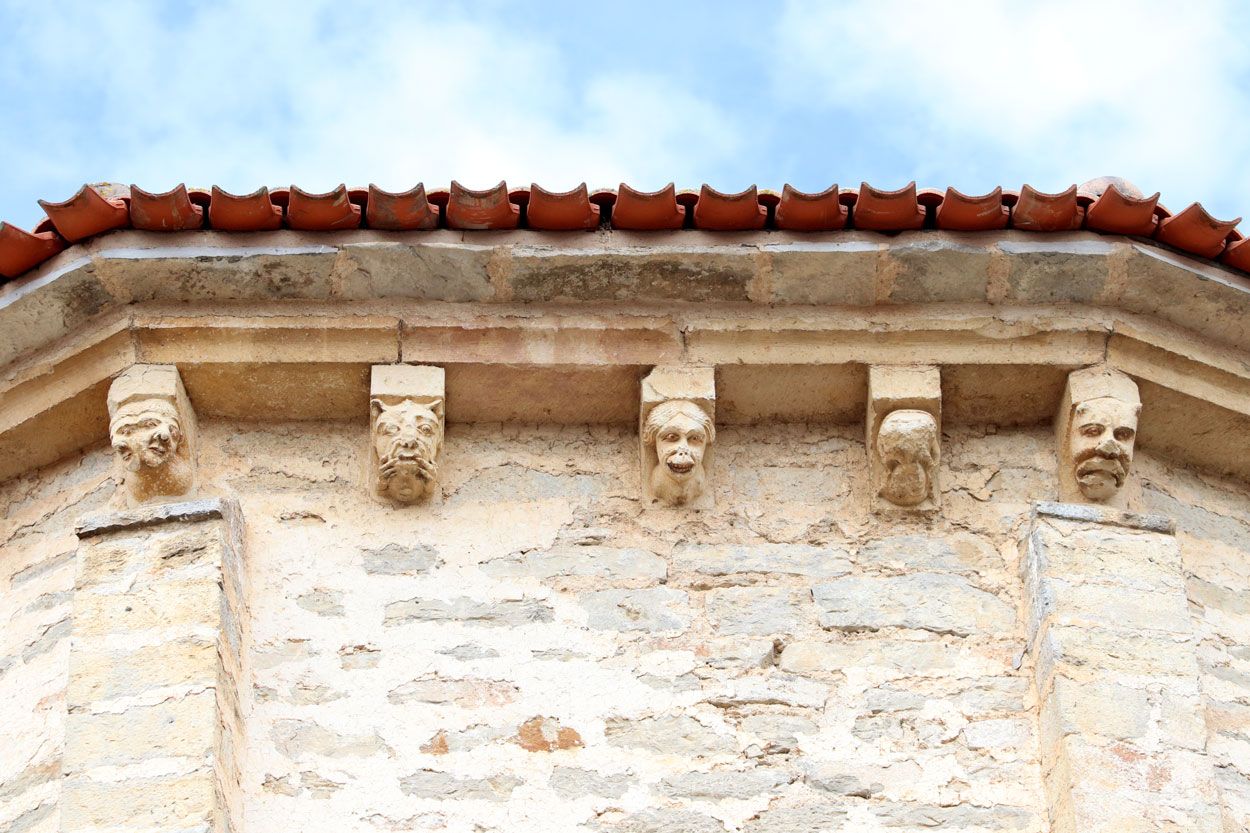 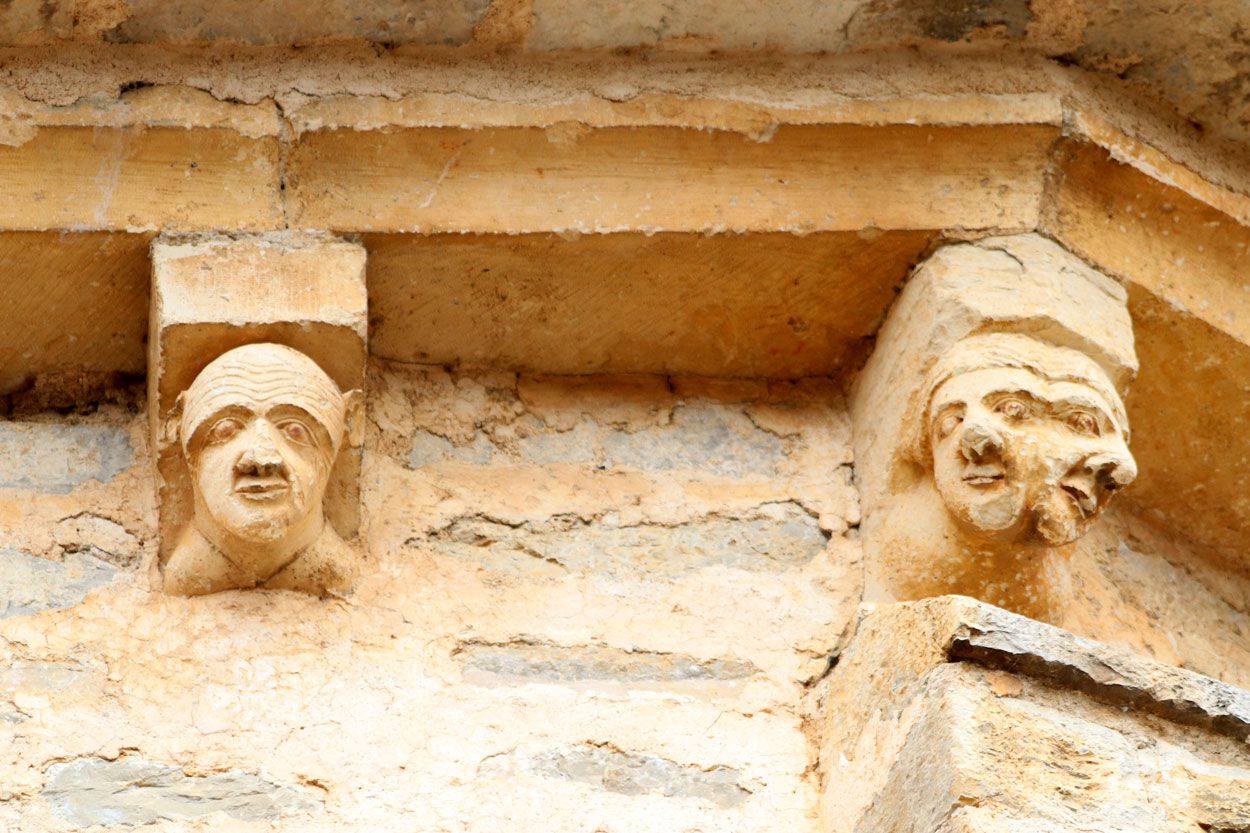 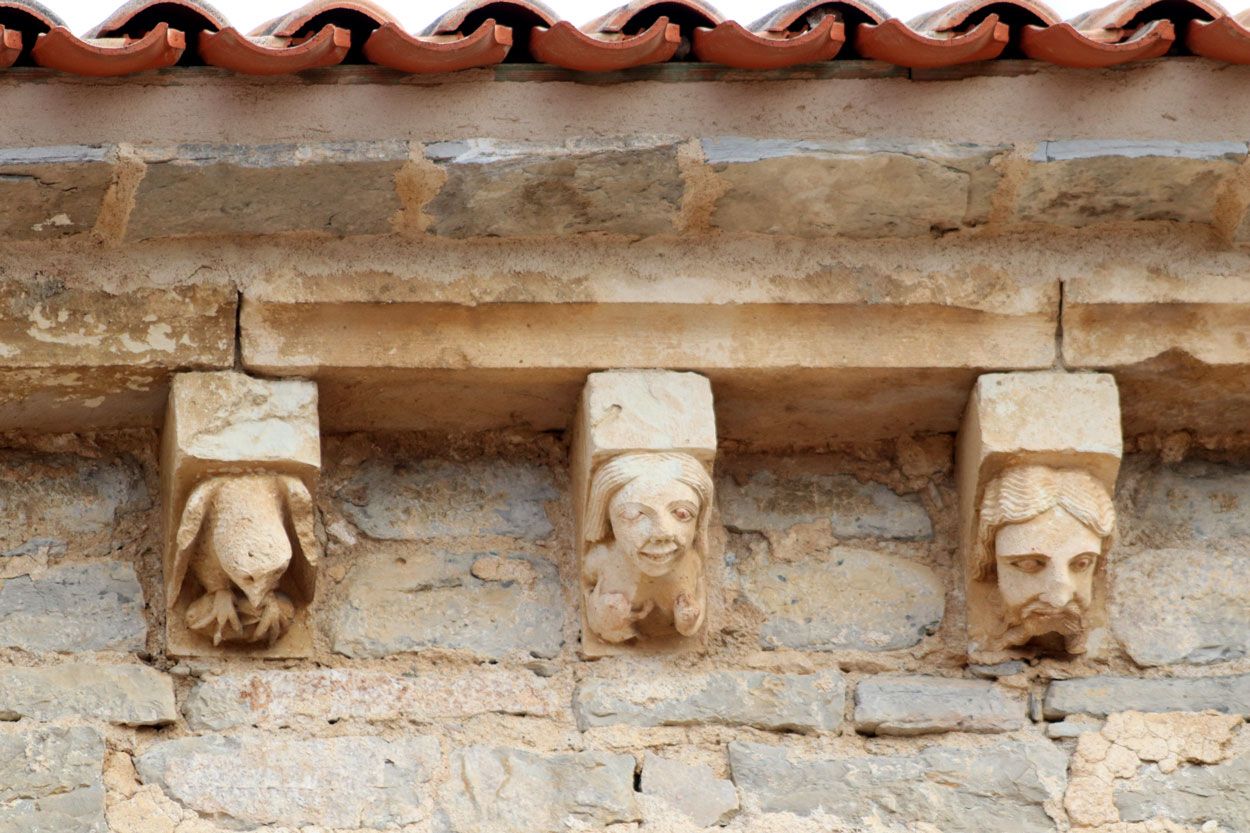 The facade is located in the southern area, as usual in churches of Álava, and presents a period of clear transition from the Romanesque motifs to the already Gothic forms. The presence of the theme of the Lady and the Knight stands out on two corbels on the discharging arch, very profuse in Álava, and probably in connection with the patrons of the temple. On the columns on the right, the vegetal decoration is still present and, among the foliage, some figures appear, such as the eagle with its prey, an obese man and a lady pretending to hold the impost with their hands raised, and confronted animals.. 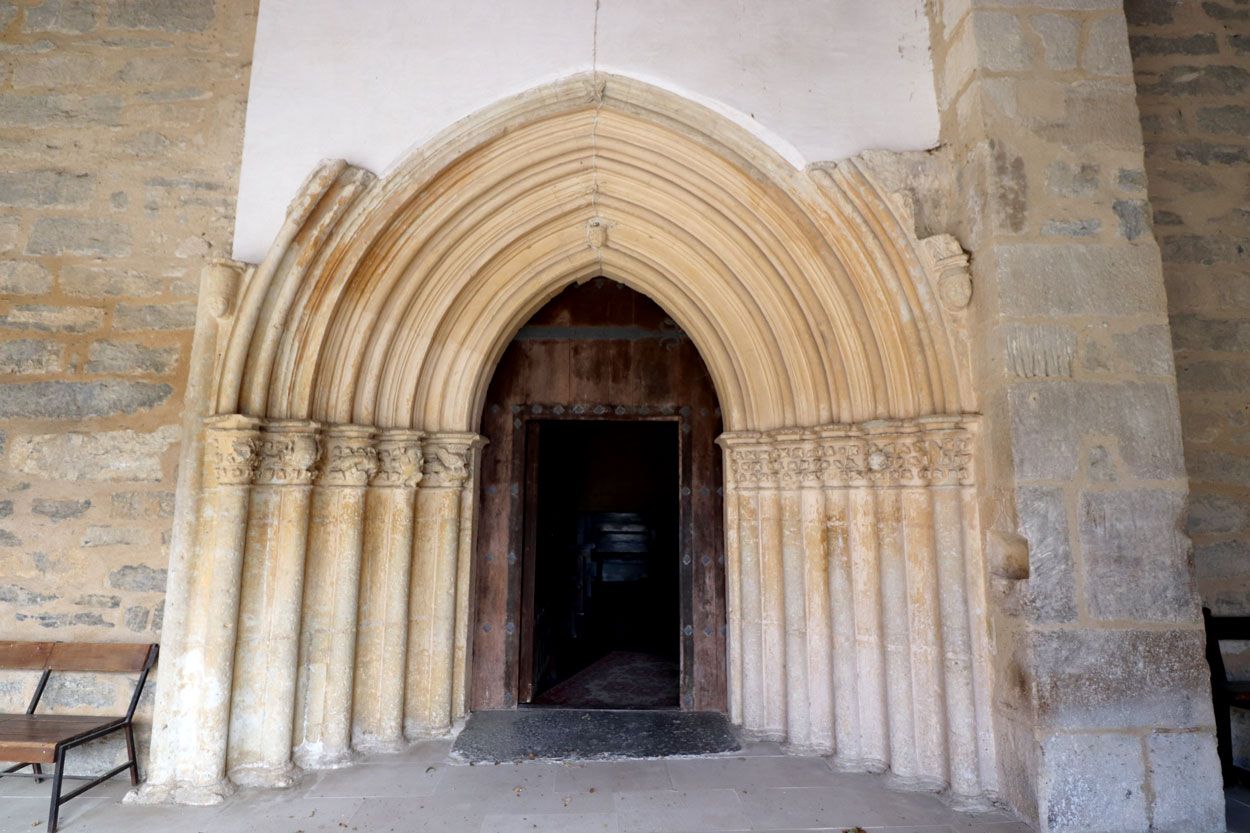 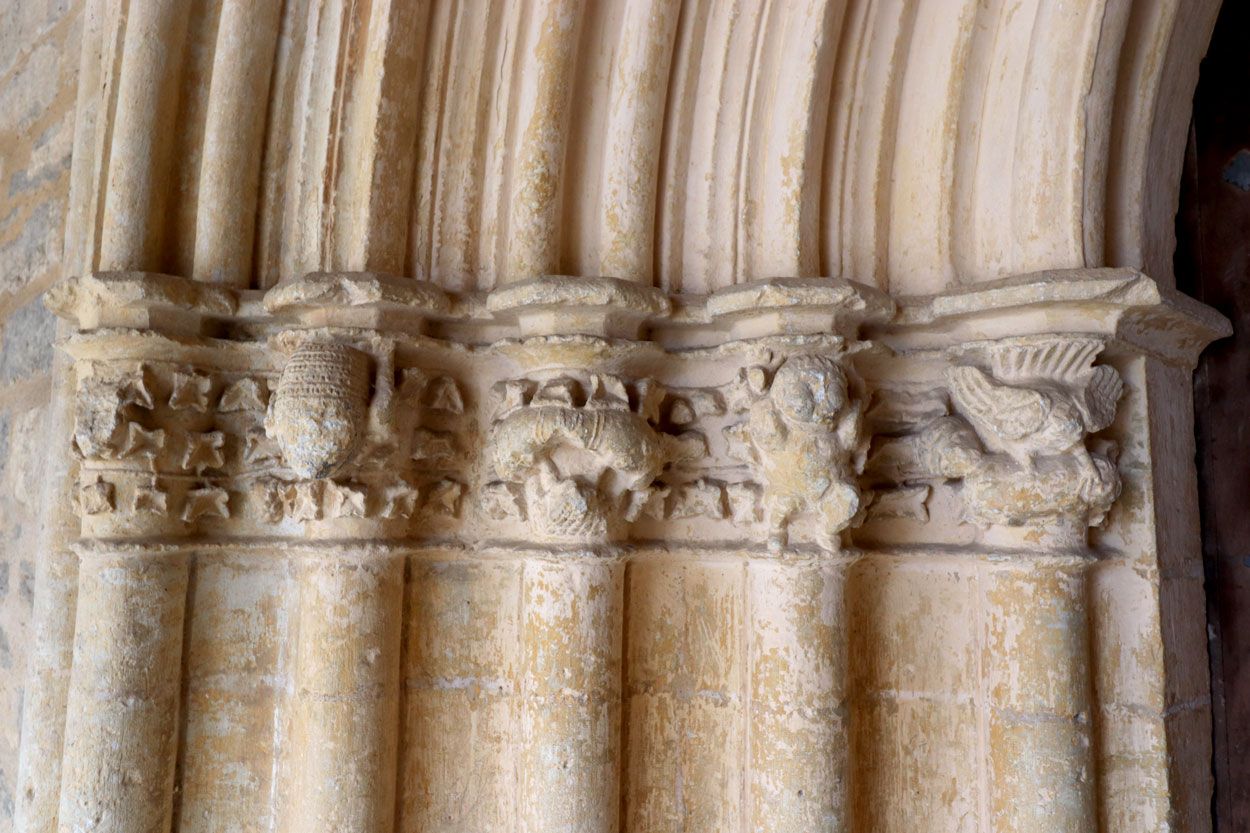 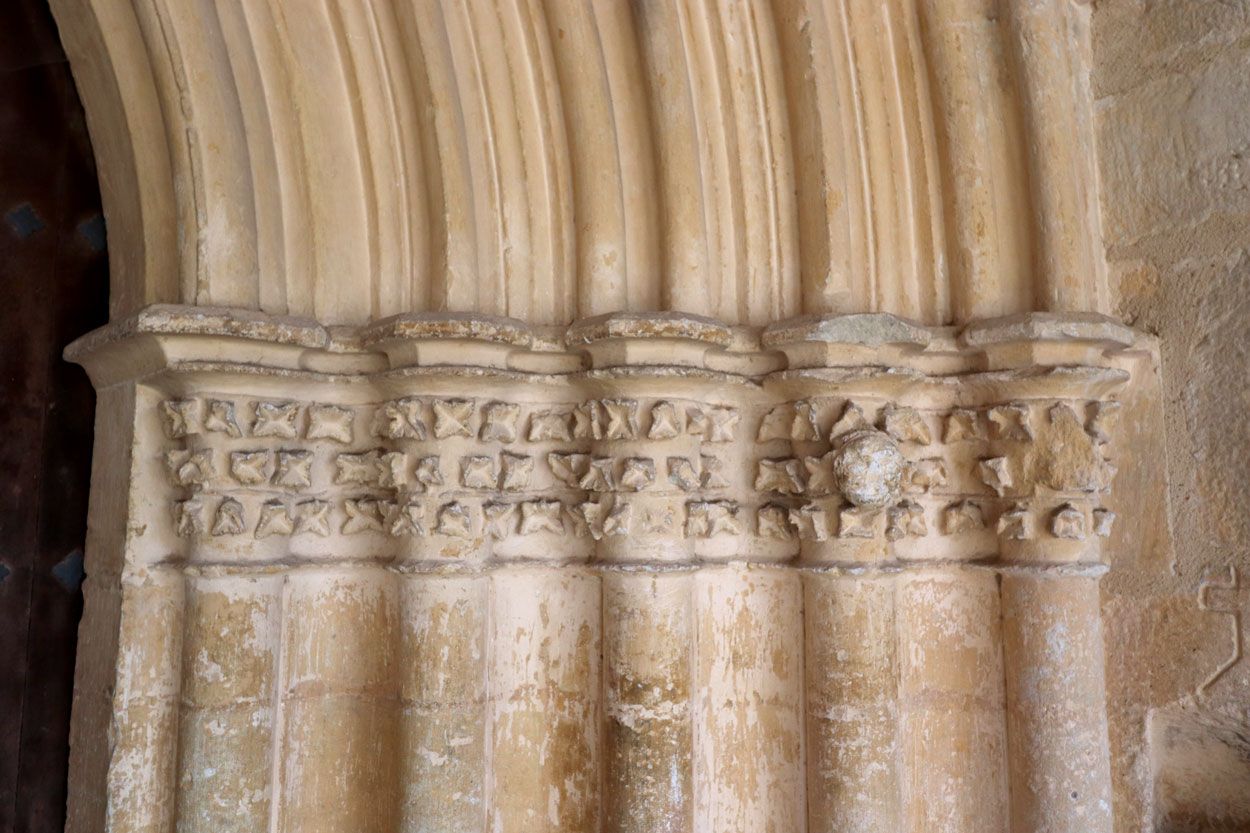 The interior of the church

Once inside, the single nave is divided into two sections, covered by ribbed vaults, plus the presbytery, which is accessed through an imposing triumphal arch. The paired columns of the great arch have vegetable decoration and angels with horns that point at the sky appear on the capitals of the small columns. The face of a lady with a barbette headdress reappears here and, on the keystones, we see a character spitting leaves out of its mouth, an Agnus Dei and a flower. 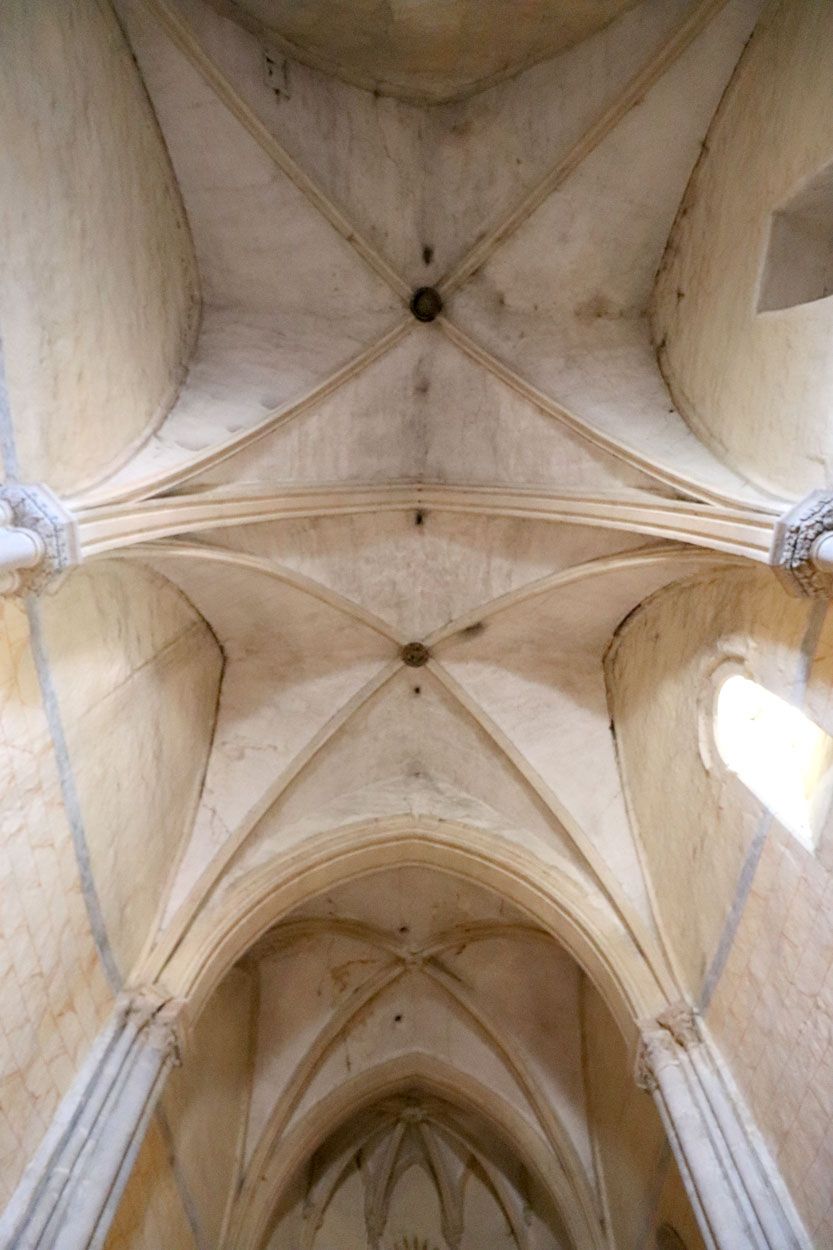 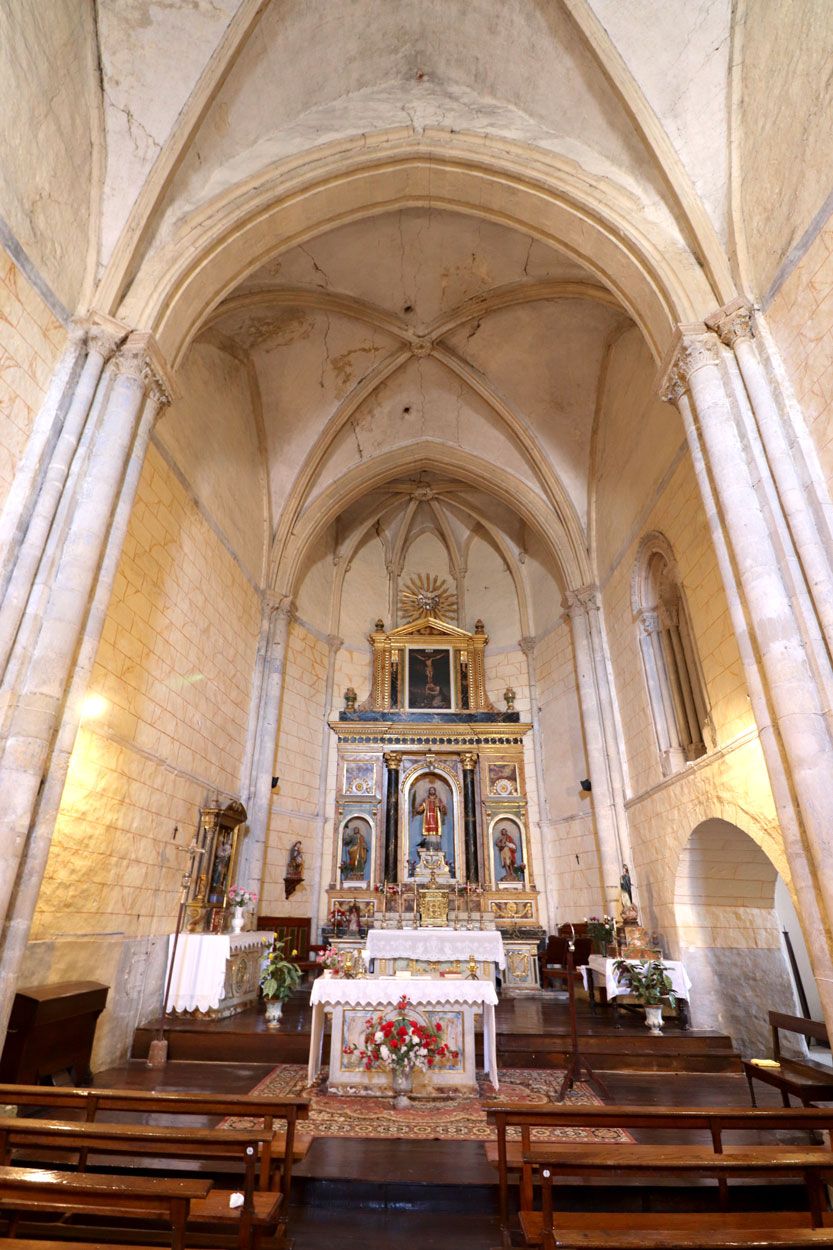 It has a neoclassical retable where a carving of Saint Vincent is located, flanked by Saint Joseph and Saint John. On the upper part, we can contemplate a painting of Christ with Mary Magdalene. 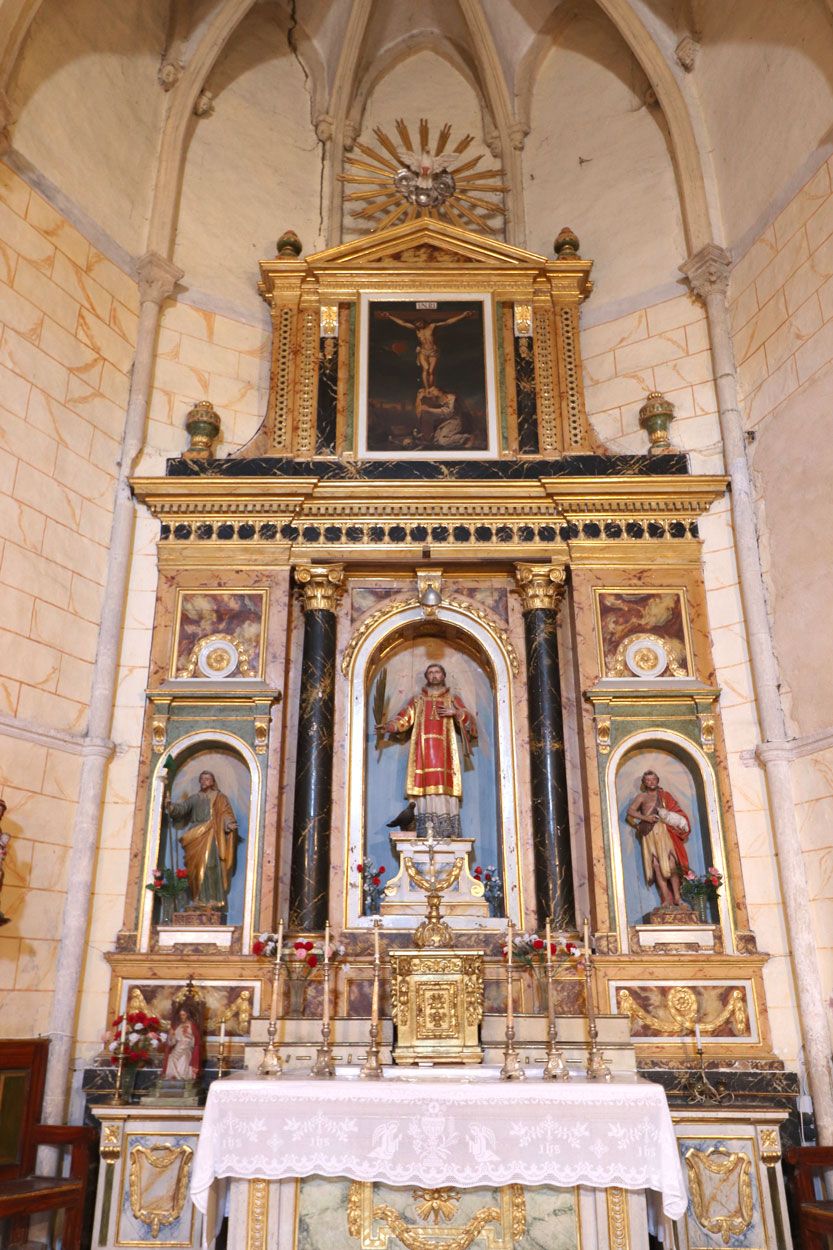 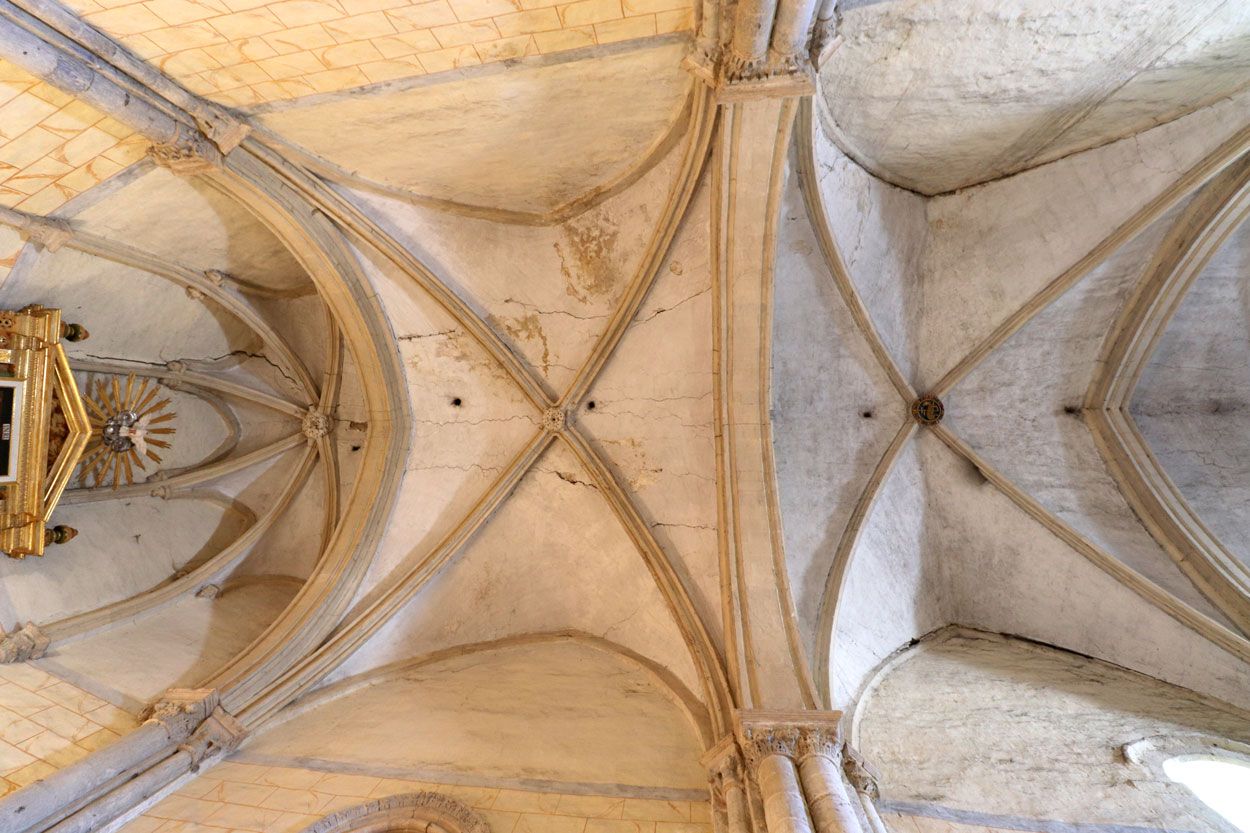 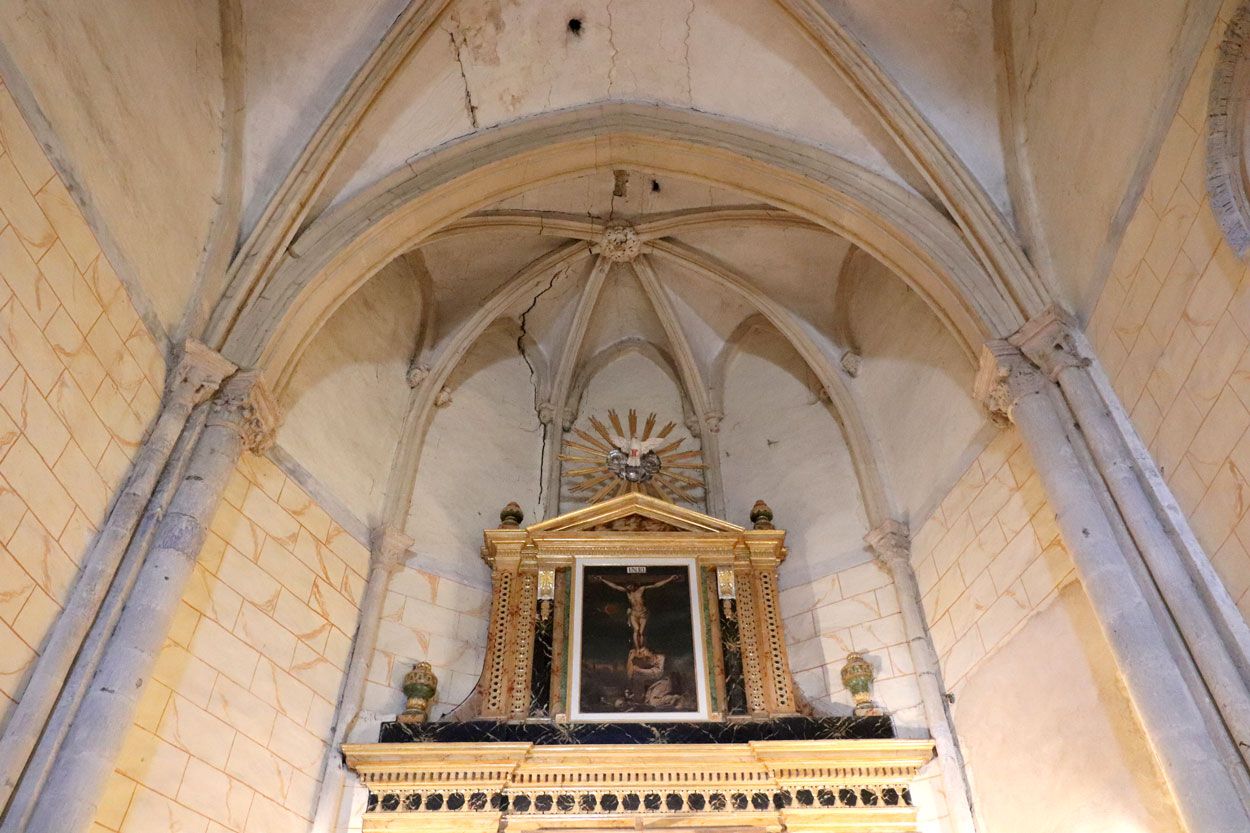 This retable hides the three Romanesque large windows of the east end, and only the one on the south wall remains visible, currently only partially visible from the inside. This one presents remains of the original polychromy and, besides, the baskets of its capitals have historiated images, something rare in the Romanesque of Álava. In one of them, we can clearly see the doubt of Saint Thomas who, bent down, introduces his finger in Christ’s wound, dressed in a tunic that exposes his torso. The following capital shows three saints, of which the most recognisable is Saint Peter, since he carries the keys. The capitals of the right side have acanthus-based vegetable decoration. From inside the chapel of Saint Blaise, it is also possible to see the capitals that were originally outside the temple, where two harpies that appear behind the foliage stand out.

Nowadays, we can see the medieval carving of the Andra Mari de Ubarriarán inside. Originally belonging to a disused hermitage, it is a small image of the 14th century of the Virgin with the Child. 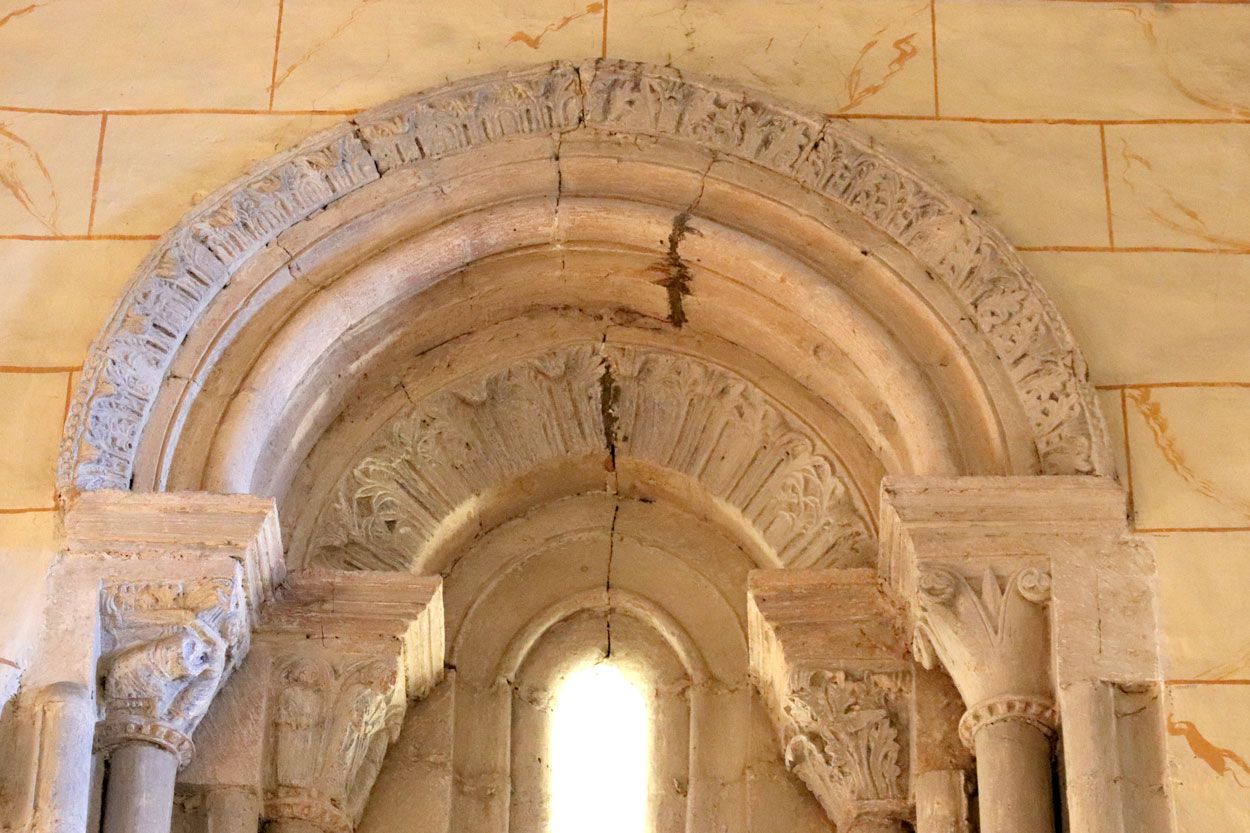 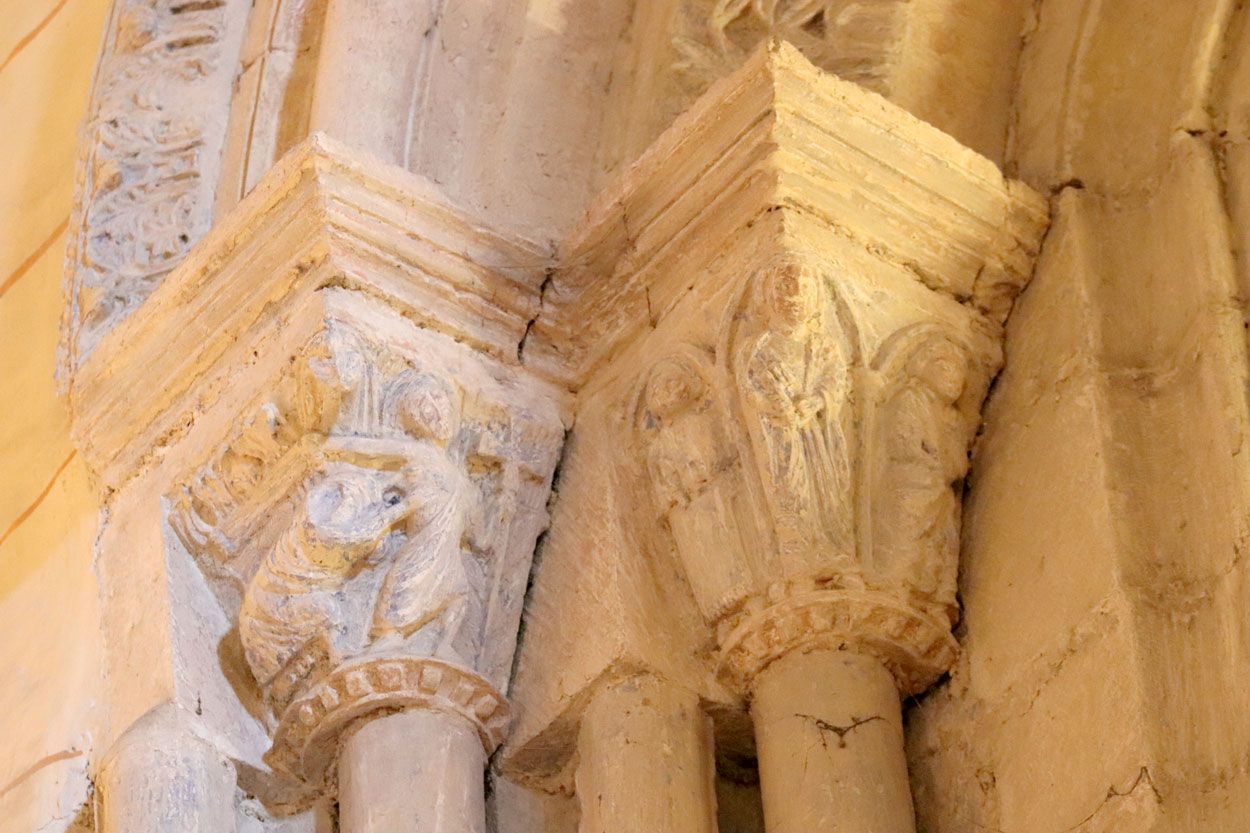 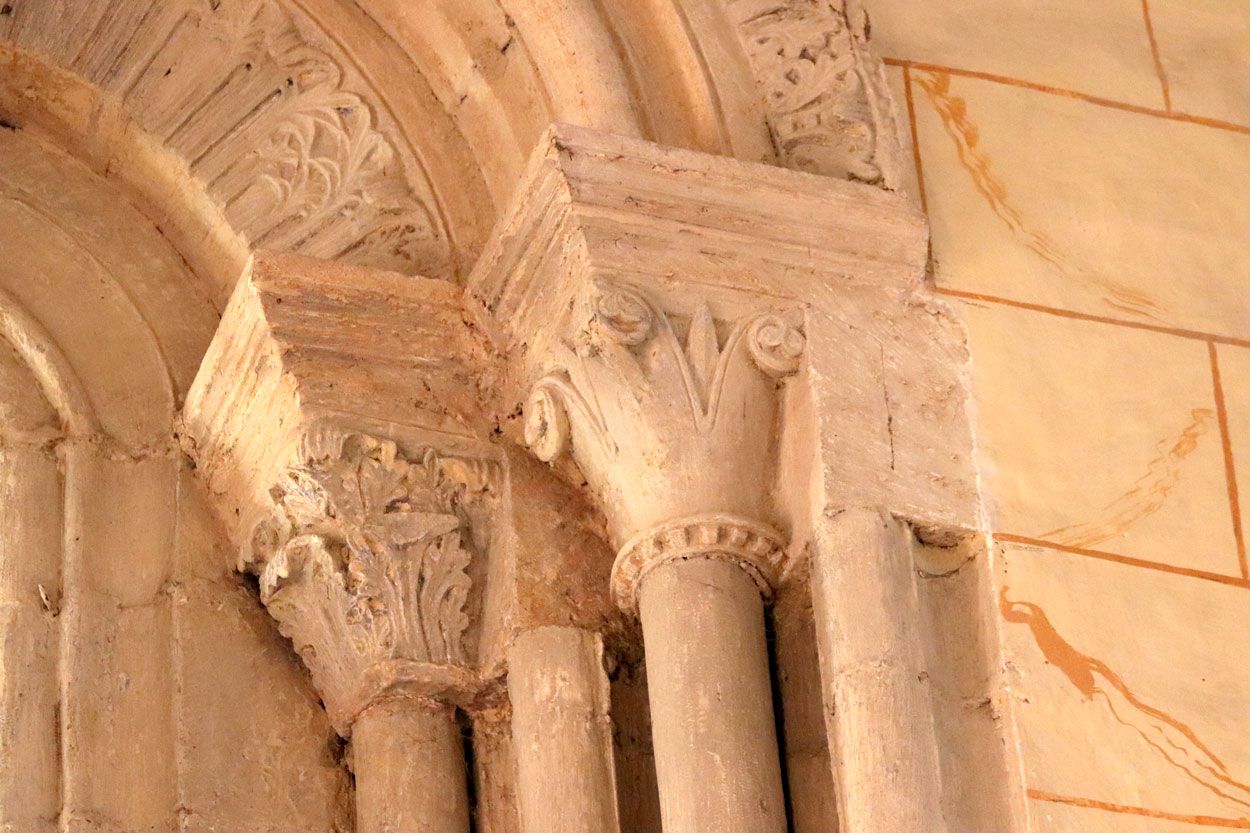